French Scientists and My Grandfather: A Story of Thorazine

An antipsychotic changed the life of not only 1 man, but an entire family. 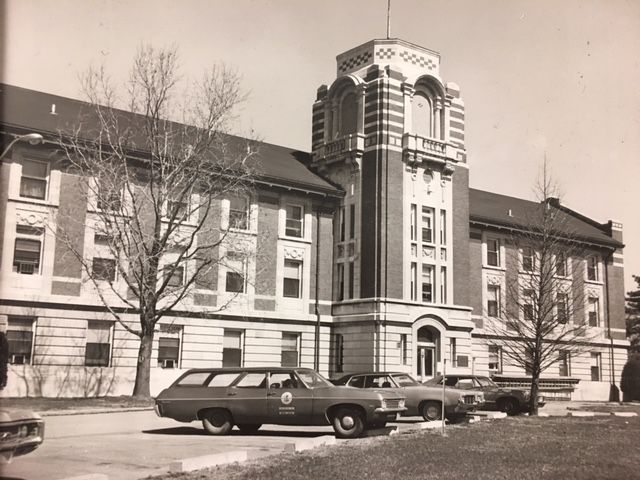 This article is a thank you to scientists and researchers all over the world, who complete years of education, work quietly behind the scenes, taking tremendous intellectual and professional risks; after all, research can go on for decades only to find the path is a dead end, or someone gets the right results first by a few months. But the hardships are worth it. When successful, scientists alleviate suffering not only for the afflicted but also that individual’s family and friends.

When I was about 10 years old, my maternal grandfather was diagnosed with schizophrenia. Not a convenient diagnosis in 2021, much less so in 1954. My family lived in a small farming community in southern Illinois. There were few general practitioners who also functioned as surgeons, but there were no psychiatrists or psychologists for miles.

My grandfather was a happy, harmonica-playing man who never missed my softball games. For birthdays, I was given a silver dollar. He had a steady job at the Heath Candy Factory. He and my grandmother had 3 children: my mother, her sister and brother. Because there were no high schools within a very large radius, he attended a 1-room schoolhouse for 1st through 8th grade.

At his tallest, he might have been 5’1”. He had bright blue eyes and a shock of dark hair. Having grown up dirt poor, he loved to dress well. He read the Bible and went to church regularly.

His slide was fast and precipitous. He began pacing and talking under his breath. He scarcely knew any of us. He seemed frightened and his contorted face registered pain. For children, like my cousins and me, his appearance scared us—our grandad became someone we did not want to be around.

A Matter of Timing

What happens next is a story of international intrigue.

My family realized they were helpless. Without any monetary resources, their only recourse was to have him admitted to Alton State Mental Hospital1 in Alton, Illinois, a 150-mile drive from our town (Figure 1). 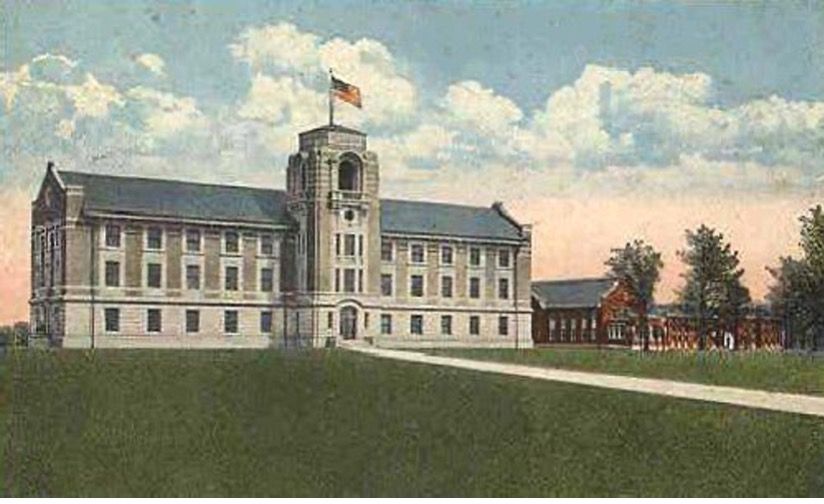 My grandfather’s experience coincided with a major breakthrough in the treatment of mental illness. That treatment restored him to us, perhaps not perfectly, but he came home and enjoyed life from about 1960 till his death in 1987 at age 86. Countless other thankful families had the same experience.

He was among the first people to be given the drug chlorpromazine, trade name Thorazine (Figure 2).2 In our small town we knew little about Paris, France except what we heard from soldiers returning from WWII. Nevertheless, based in Paris, serious scientific minds at their respective locations were all responsible for helping my grandfather: Paul Charpentier of the Pasteur Institute; Henri-Marie Laborit, MD, a surgeon born in Hanoi but at the time working for the French Navy in Morocco; Simone Courvoisier, Head of Pharmacology at Rhone Poulenc; Pierre Deniker, MD, a psychiatrist at St Anne’s in Paris, plus Clinical Chair of Psychology at the Sorbonne; and another psychiatrist and Deniker’s colleague, Jean Delay, MD.3-5 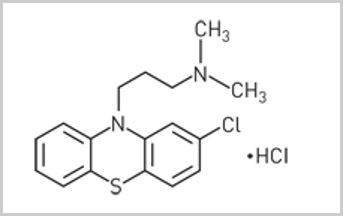 Surgery anytime, anywhere is fraught with anxiety for the patient. So, through the early 1950s, excessive anesthesia was administered. Laborit observed if he administered an antihistamine, available for allergies and nausea, prior to surgery, his patients were much calmer and more relaxed, requiring less anesthesia and experiencing more rapid healing.5 This is a perfect example of how research, serendipity, and alert minds conspire together.

In 1937, Daniel Bovet, DSc, an Italian, Swiss-born pharmacologist synthesized the first antihistamine; it was toxic. Working with researchers at Rhone Poulenc, they improved his synthesis and made diphenhydramine, still the ingredient of current day Benadryl, Dramamine, and Sominex. He would win the Nobel Prize for Physiology or Medicine in 1957.3

The improved antihistamine samples were sent to Laborit to try with surgery patients to calm them presurgery—it worked. Then, Courvoisier figured out how to add a chlorine atom to the antihistamine molecule, creating chlorpromazine, which had even better results. Delay at St Anne’s hospital, along with Deniker, found they could treat hallucinations, delusions, and anxiety with chlorpromazine. By 1952, Rhone-Poulenc expanded its use beyond surgery, using it to treat psychotic episodes, pain, morphine reduction, nausea, vomiting, and convulsions.3

Both Rhone-Poulenc and Smith-Klein (currently Glaxo-Smith-Klein) had previously made tentative moves to enter the markets on both sides of the Atlantic; here was the perfect opportunity for them. The rest is history, but my grandad, grandma, parents, aunts, uncles, cousins, and numerous friends in our small town had no idea how much their lives were about to change.

The Importance of Family

Before he was administered this life-changing drug, in roughly 1957, my little grandad was housed in the imposing complex known as Alton State Mental Hospital in Alton, Illinois (Figure 3). Only my grandmother and her children were ever allowed inside. I do know from eavesdropping on adults that he received electric shock therapy. It did nothing for my grandad. I saw this treatment administered in the movie A Beautiful Mind about John Forbes Nash, a brilliant mathematician. I cried.

Lobotomies were also somewhat in vogue. Mercifully, one was never tried on him. Inside the imposing, rock-faced buildings, as austere and forbidding to a child as a Jane Eyre nightmare, patients were also treated with cold immersion baths.5 I suspect he was.

To this day, psychiatry tells us that drugs alone rarely rescue a patient. They need a family of some kind to care about them. After his admittance, our family would make a car caravan and drive the 2-lane roads to Alton for his birthday, holidays, etc. In warm weather, we packed picnic baskets of fried chicken and potato salad. An attendant delivered grandad to the door. Everyone would hug him and lead him to a table on the grounds, where he sat in utter dismay and we sat in pain.

Periodically, he would be brought home for a visit. I would like to think now that we helped more than we knew. What was being modeled for my cousins and me was love and care of the helpless.

Then, my grandmother was asked to try something called Thorazine.3 Chlorpromazine had traveled all the way from France to southern Illinois. A lot of other families across the US were asked the same question. The federal government was attempting to deinstitutionalize the mental hospital population, which in 1953 stood at 560,000. Thorazine did it for them. By 1975, the population had dropped to 193,000.2 One of those was my grandad.

He came home timorous but no longer contorted by mind torture. He stopped pacing and mumbling. He never returned to work at the candy factory, but he became the gardener of choice for anyone who wanted a perfect yard and flowers. He rode his bike to houses all over town and worked his magic. He grew dahlias the size of pie plates. Irises of all kinds and colors were his specialty. His grass mowing was meticulous. The townsfolk paid him, restoring some dignity. He returned to church and sang with gusto.

There were minor problems. He could irritate the “dickens,” as he would say, out of anybody by talking off not just their leg but arm, too. His body would at times appear rigid, but not painful—a common side effect of the drug. He was able to enjoy many of his previous pastimes, and rejoined our lives. Grandad was devoted to the St Louis Cardinals, listening to every game on the radio. He attended my wedding dressed up in suit and tie. Even after all of us cousins were adults with families of our own, he called (over a landline) to play a harmonica solo, “The Wabash Cannonball.”

His yard money was not eligible for social security and there was no disability then, so he and my grandmother lived very tightly within their means. She went to work at Heath Candy Factory. He had a garden that could have fed the state of Rhode Island. He gave produce away by the basketsful. He fished at a nearby lake. He picked blackberries by the gallons—they ended up in my grandmother’s jellies and cobblers.

The Difficulty and Serendipity of Science and Medicine

I regret the scientists in France never met my grandad. I think they would have been delighted. I wish they could know how much they helped a small, close-knit family in southern Illinois.

Of course, there were many across the world that, for a variety of reasons, could not tolerate the drug or who did not have the advantage of a caring family. Chlorpromazine is still used in an assortment of variations to this day. Its success introduced a host of other antipsychotic drugs and medicines to help those with mental illnesses.

The creation of chlorpromazine illustrates the difficulty and serendipity inherent in science and medicine. In many ways, the scientific community has done miraculous work for so long, so well that to laypersons it appears easy and capable of being ordered up like a truffle pizza. We see drugs advertised on television commercials along with cars, fast food, and insurance. Hence the public goes up in arms when certain illnesses and conditions are not solved quickly.

Not long before he died, I saw my grandfather in the hospital. As I said goodbye, we both cried and hugged. He was sad he had not been “much of a man.” Of course, he was wrong. Individuals like him who suffer so much teach and hopefully bring out the best in us.

In memory of my grandfather, Roy W. Mills. This thank you is long overdue.

Judith Steininger is an academic, and an award-winning writer. She has taught at Boston College, University of Wisconsin-Milwaukee, Milwaukee School of Engineering, and as a Peace Corps Volunteer in Kenya, East Africa. She is the president of Language Arts for Business and a former contributor-essayist at Milwaukee Public Radio.