It’s comforting to think we control our lives. Then the weathermen predict a meteorologic Armageddon, and this time their predictions turn out to be correct.

It’s comforting to think we control our own lives. Then the weathermen predict a meteorologic Armageddon, and this time their predictions turn out to be correct. 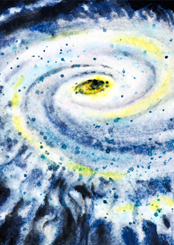 For the past several days, Hurricane Sandy has been menacing her way up the east coast of the US. She has been whipping up frenzied surf, winds, rain, and rhetoric that the “storm of the century” is taking aim at the northeast. We learn that a confluence of weather-related events that has not been recorded in the last 100 years is about to wreak havoc over a vast swath of the east by locking Sandy into place, and prolonging the wind and rain and monster tides she will deliver. “Frankenstorm” is slowly approaching.

The countdown to landfall is on: residents of coastal areas in several eastern states are being asked-or told-to evacuate. TV and radio hosts are advising everyone to get ready with flashlights, canned foods, and bottled water. Those who live near the water are warned to tape or board up their windows, and to move their cars to higher ground. As the hours go by and the media beat a steady rhythm, there is a growing state of excitement, anxiety, and fear among the millions of residents. Where, exactly, will Sandy make landfall? Images of Louisianans clinging to roofs and floating face down in the flood waters of Katrina are fresh in our heads.

At precisely the hour we were told to expect Sandy to make her presence felt, the winds pick up and the rain begins to fall. It is already dark. Suddenly, 80 mph gusts make huge trees bow as the rain falls sideways in sheets. We watch and listen from the relative safety of a doorway and hear centuries old oaks and elms snap like toothpicks and land in yards and on houses around us. There is a loud groan from somewhere and the power goes out. There is only the sound of wind and rain and falling trees now, punctuated by lightening. The power of this storm is awesome and humbling. I am mesmerized.

The storm rages all night. And when it finally stops, millions are without power. Many are homeless. Some are dead.

In the suburbs, tens of thousands of venerable old trees litter roads and roofs. Power lines are laid low. Roads are impassable. There is not a single 21st century sound. Homes in seaside communities and the outer boroughs are destroyed; coastal towns are devastated by flooding. Lower Manhattan is dark. The airports are shut down. There are no trains. Subways and tunnels are inundated. Bridges are closed. Stores are shuttered. Offices, banks, post offices, and even Wall Street. . . all are empty. People can’t get their news unless they have battery operated radios or cell phones. They leave their dark, cold apartments and take to the streets in the storm’s aftermath. . . they wander around Soho and Tribeca and the East and West Village. They are befuddled, their routines totally interrupted. They stocked their refrigerators with food ahead of the storm, and now worry that it is going to rot. There’s no coffee. No hot showers. No place to buy food. And it’s getting cold and dark, so early now! There are rumors that the only creatures thriving in some parts of NYC post-Sandy are the rodents. Who knows how many fragile, handicapped, or elderly, or infirm people are trapped in their apartments without power? For those residents lucky enough to have family or friends who have power outside the city, there seems to be no escape. In an effort to avert further gridlock in Manhattan, Mayor Bloomberg has issued an order that no cars will be allowed into or out of Manhattan with fewer than 3 passengers. My sister (who lives below Union Square) will have to walk the 30 miles to Connecticut to escape her empty, dark, quiet, cold, and waterless building unless we send a crew to fetch her. (We do.)

More than 20 million storm-related tweets are posted.1 Those without power who still have working cell phones can follow what’s happening on Twitter and learn where they can go if they need food and shelter. Those who don’t are-quite literally-in the dark.

In NYC, 3 hospitals along the East River and 1 in Coney Island in Brooklyn evacuate patients as water pours into basements and power fails.2 Surgeries are cancelled. Medical records are lost or unavailable. More than 1200 critically ill patients and newborns (many in the neonatal intensive care unit) are moved to other hospitals. . . the transfers take place in eerily quiet and cold dark corridors. Elevators don’t work and patients must be carried down flights of dark stairs. Some of the youngest and sickest patients are hanging on for life, breathing from battery operated respirators. Forensic patients at Bellevue Hospital are loaded onto a bus and make a 6 hour drive to a psychiatric facility in upstate New York. Before they depart, psychiatrists at Bellevue scribble discharge summaries.

For millions of people, Hurricane Sandy brought life as we know it to a temporary halt. And as of this writing (2 weeks after), thousands struggle still. The Daily News reports that the storm left at least 106 people dead in the US, 43 in New York City; in its immediate aftermath 8.5 million people had no power, many of whom were left to cope without heat or water or gasoline.2 Tens of thousands of people-perhaps as many as 40,000-are homeless. Some lost everything.

On TV last night, I heard that Sandy was the 14th weather-related catastrophe to befall the US this year. Uncontrolled wild fires. . . droughts. . . tornadoes . . . the hottest month on record. Nerves and tempers are frayed; people talk of stress, anxiety, nightmares. Some must face domestic, financial, and emotional turmoil or ruin.

It’s comforting to think we control our own lives. Sandy taught me a sobering lesson about wishful thinking.

[Editor’s note 1: If you have a weather-related story to share with your colleagues, I invite you to call me at my office -- 203-523-7095, leave a message in the comment box below, or send me an email at Susan.Kweskin@ubm.com so we can set up a time to record your tale. We'll post it on this website.]

On November 19, Governor Andrew Cuomo (D-NY) announced in a press release that the Office of Mental Health "Project Hope" will deploy 1000+ trained mental health professionals to work in communities affected by the storm.