A “high-tech” approach to relapse prevention in patients with schizophrenia. 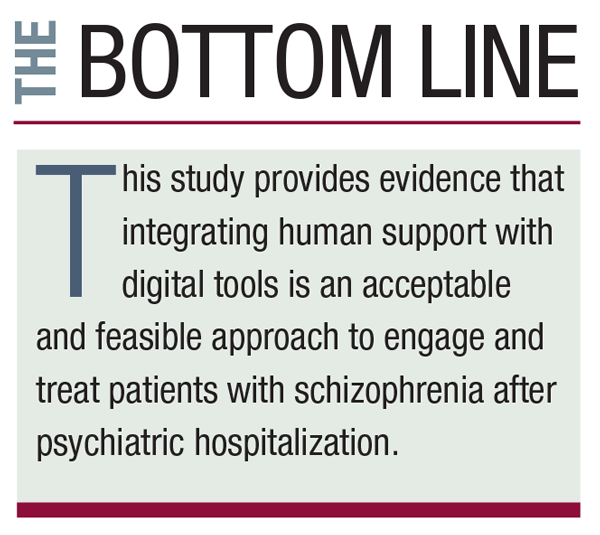 The clinical course of schizophrenia is often characterized byrecurrent relapses, which areassociated with adverse outcomes-including treatment-resistant symptoms, cognitive decline, and functional disability. Interventions following psychiatric hospitalization to reduce rates of recidivism, therefore, are needed. There is evidence that technology-based interventions for patients with schizophrenia may be beneficial,1 although such interventions may require trained support personnel.2

Baumel and colleagues3 reported on the Health Technology Program (HTP), which aims to improve care and reduce costs for patients with schizophrenia by integrating technology to deliver evidence-based treatments, with assistance, encouragement, and oversight from mental health technology coaches (MHTCs).3 This group evaluated the acceptance of this program, as measured by the frequency of contacts with MHTCs and preferences for and satisfaction with the digital tools.

The authors evaluated data on the first 200 patients enrolled in the 6-month Improving Care and Reducing Cost study. Patients aged 18 to 60 years with a clinical diagnosis of schizophrenia, schizoaffective disorder, or psychotic disorder not otherwise specified, and psychiatric hospitalization within the past 60 days (including current hospitalization) were included. The only exclusion criterion was the presence of a serious comorbid general medical condition.

The 5 components of the HTP were (1) developing a relapse prevention plan with the MHTC, (2) an interactive smartphone illness self-management system, (3) a daily support web site for psychoeducation for patients and family members, (4) web-based cognitive behavioral therapy skills for psychosis modules, and (5) evidence-based psychopharmacological treatment.

The mean age of the participants was 35. Fifty-nine percent of subjects were male, 48% were white, and 31% were African American. Ninety-three percent of enrolled patients completed the 6-month program.

During that time, patients had a mean of 28 contacts with the MHTCs, lasting a mean 38 minutes treatment.

The mean age of participants was 35. Fifty-nine percent of subjects were male, 48% were white, and 31% were African American. Ninety-three percent of enrolled patients completed the 6-month program.

During that time, patients had a mean of 28 contacts with the MHTCs, lasting a mean 38 minutes (ie, more than weekly contact). Of these contacts, 52% included discussion of case management, along with discussion of the digital tools in 45% and the relapse prevention plan in 44%. Eighty-seven percent of participants used at least one digital tool during the study, and 96% were at least somewhat satisfied with the intervention.

The authors concluded that there was high utilization and acceptance of, and satisfaction with this coach-coordinated, technology-delivered relapse prevention program. They noted that most of the contacts between patients and the MHTCs occurred outside the clinic, and over one-third of contacts involved technology (eg, phone, text, and e-mail). A limitation of the study is the question of the added value of the digital tools, beyond the support of the MHTCs.

This article was originally posted on 11/01/2016 and has since been updated.

Dr. Miller is Associate Professor in the Department of  Psychiatry and Health Behavior at Augusta University in Augusta, GA, and  Schizophrenia Section Editor for Psychiatric Times. He reports no  conflicts of interest concerning the subject matter of this article.

Articles in this issue
Introduction: Cognition, Rarely Discussed
Lithium Therapy, Bipolar Disorder- and Neurocognition
Cognitive Enhancers in Children and Adolescents: What Psychiatrists Need to Know
To Google or Not to Google? Is “Patient-Targeted” Googling Ethical?
Opioid Analgesics: The Myths-and the Facts
Medical Marijuana and Dementia-Associated Agitation: Stirring the Pot
Eight Enemies of Good Writing for the Lay Reader
A Coin Flip
Committed: The Battle Over Involuntary Psychiatric Care
An Update on Melancholia
Take Two Pills and ...
Professionalism Defined
Building a Better Older Brain
Deborah Danner and the Suffering of Schizophrenia
Maintenance of Certification and Self-Mortification
Related Videos
Related Content