Avicenna may have been among the first physicians to document that anger is often a transitional state from melancholic depression to mania—implicitly recognizing the “switch” phenomenon. 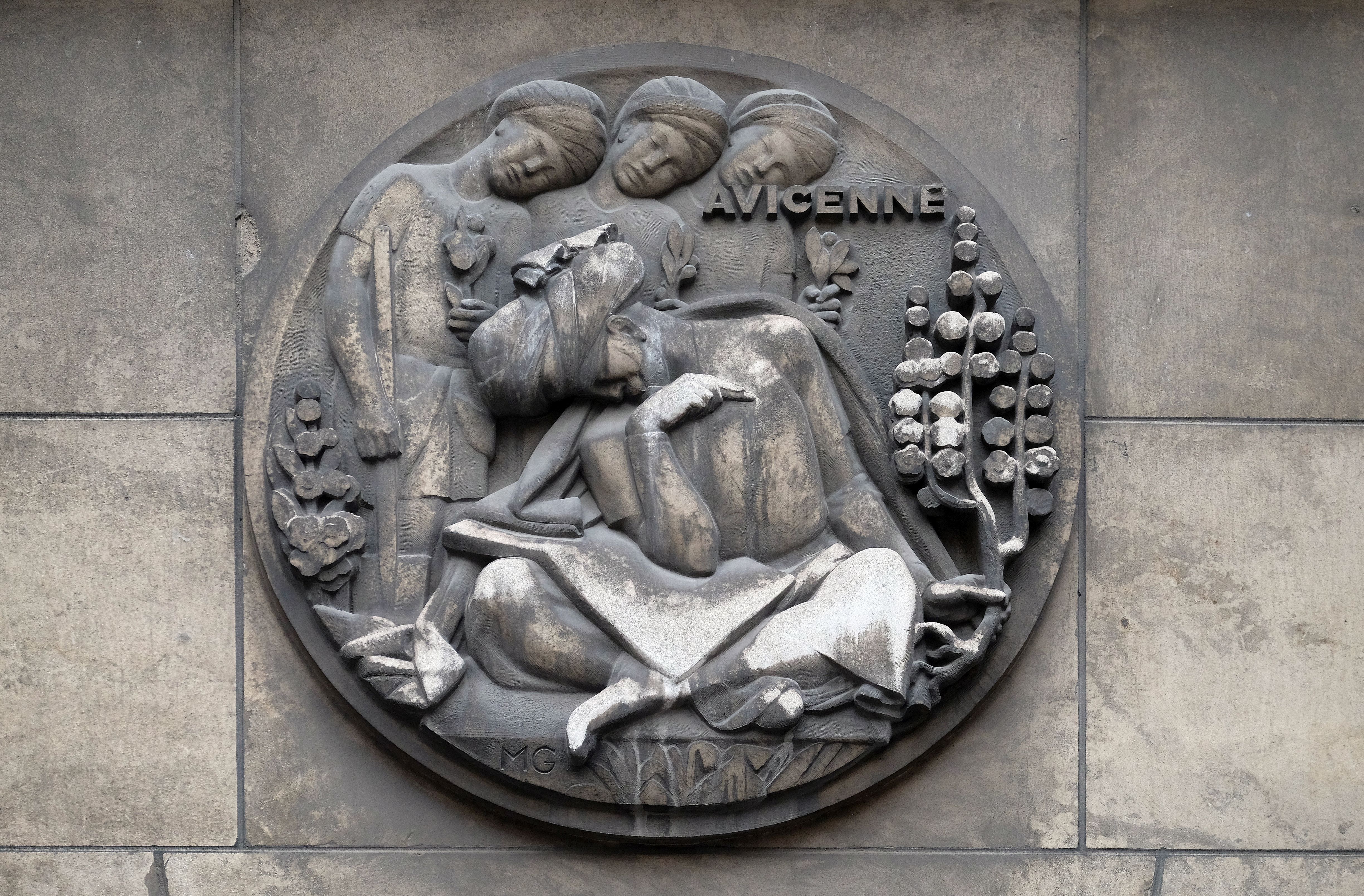 Anyone who thinks all psychiatric disease categories are merely “socially constructed labels” cooked up by modern-day, “institutional psychiatry” should read Avicenna’s writings on melancholia—and then think again.

Avicenna (980 CE-1037 CE) is the Latinized name of Abu Ali ibn Sina, the Persian philosopher, thinker, and physician who is often considered “the most famous and influential of the philosopher-scientists of the medieval Islamic world.”1 By one account, Avicenna had read and memorized the entire Qurʾān by age 10! Among philosophers of the medieval period, Avicenna is probably best remembered for his distinction between existence and essence—an esoteric matter we need not pursue here.2 But among historians of medicine, ibn Sina is probably best known as the author of The Canon of Medicine (in Arabic, al-Qānūn fī al-Ṭibb), which served as the preeminent European medical text as recently as the 17th century.

Why should psychiatrists today care about a thousand-year-old manuscript?

As a specialist in mood disorders, my interest in The Canon lies in Avicenna’s remarkable description of Mālīkhūlīyā—what we would call melancholia. He saw it, first of all, as affecting both the psychological and somatic spheres, and he divided melancholia into early phase and chronic phase. Symptoms of early phase melancholia included suspicions of evil, fear without cause, quick anger, involuntary muscle movements, dizziness, and tinnitus. Chronic melancholia symptoms included moaning, suspicion, sadness, restlessness, [and] “abnormal fear, such as . . . that the sky may fall on one’s head . . . [or] being swallowed by the earth.”3 These fears certainly sound like delusions, thus suggesting psychotic features in chronic melancholia. Avicenna also noted some features of chronic melancholia that are consistent with—or similar to—what we would now call a “mixed state” or perhaps a switch into mania: increased libido, involuntary laughter and imagining “that [one] is king.”3 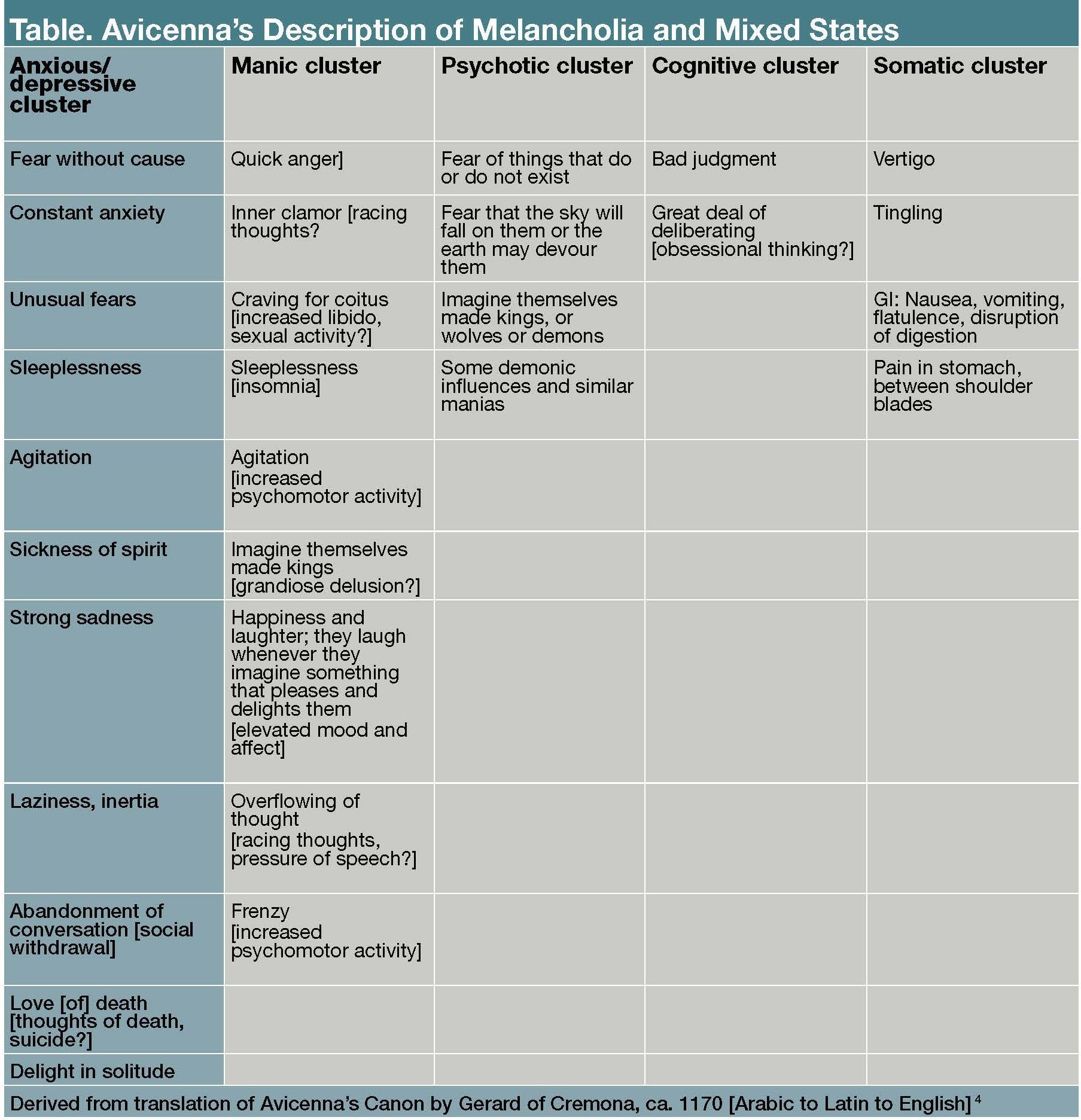 At first glance,Avicenna’s composite description—probably based on many patients he had observed—may seem like a hodgepodge of unrelated signs and symptoms. But upon closer examination, I believe Avicenna’s description sorts out into 5 main clusters: encompassing anxious/depressive, manic, psychotic, cognitive and somatic features (Table). I have noted, in brackets, what might be our modern-day analogues of some of Avicenna’s terms.

One important caveat before proceeding: Avicenna’s concept of melancholia overlaps with, but is not identical to, some modern formulations of melancholia5—which also differ from the DSM-5’s specifier, “with melancholic features” (Sidebar).6

A cautionary note: my analysis is based on a 12th century translation from Avicenna’s original Arabic into Latin and then into English which almost guarantees problems of interpretation.4 Nevertheless, I believe we can still draw meaningful conclusions from Avicenna’s rich description of melancholia. Indeed, I believe Avicenna was identifying a clinical entity that is consistent with what today we would call a mixed state. This has been succinctly described by S. Nassir Ghaemi, MD, MPH, and Sivan Mauer, MD, as follows7:

It is . . . important to acknowledge that the phenomenology of mood conditions involves the frequent, if not usual, admixture of manic and depressive symptoms at the same time—called mixed states. In this scenario, a full-blown clinical depression may be present, but some manic symptoms may also be present such as rapid thoughts, increased sexual drive, and marked anger and mood lability. Thus, one can think of mood episodes on a spectrum from pure depression to pure mania, with many mixed states in between.

Ghaemi and Mauer draw a remarkable conclusion from the prevalence of such mixed states7:

If this phenomenology is correct, then it has important implications for the classification of diagnoses. The current [DSM] diagnostic system is based completely on the distinction of depression and mania. If manic vs depressive states cannot be distinguished in most cases, then the current diagnostic system would be very difficult to implement validly. Put otherwise, the frequent presence of mixed states would invalidate the diagnostic system built on a mania vs depression dichotomy.7

On this last point, Ghaemi has much more to say regarding what I would call—with a nod to Julian Jaynes—“the breakdown of the bicameral model” (Sidebar). Indeed, allowing for the difficulties of translation, I believe Avicenna would be in agreement with this non-dichotomous—or perhaps we should say unified—view of mood disorders. Moreover, Avicenna’s observation of apparent psychotic features in melancholia should not be surprising, since delusions or hallucinations occur in about one-half of manic states and in about 10% of depressive states.8 Indeed, recent work by van Bergen et al9 found that a lifetime history of psychotic symptoms was present in 73.8% of patients with bipolar type I and included delusions in 68.9% of patients and hallucinations in 42.6%.

We should note that not all the signs and symptoms observed by Avicenna map neatly onto modern-day descriptions of mixed states. For example, Avicenna describes “laziness” and “inertia” in melancholia, whereas recent work by Koukopoulos et al10 suggests that most mixed states are characterized primarily by psychomotor excitation—eg, rapid thoughts, marked rage/irritability, agitation, and impulsivity—added to depressive features. This discrepancy should not be surprising. Avicenna’s global description probably reflected his experience with many different patients with varying presentations of melancholia, which, for Avicenna, encompassed the entire range of both depressive and manic symptoms.

Finally, we should note that the DSM-5’s mixed features modifier—defined as the presence of non-overlapping mood symptoms from the opposite mood state—differs in several important respects from mixed states as described by Ghaemi and Mauer,7 who are critical of the DSM-5’s formulation.7

To be sure, Avicenna was not the first or the last ancient or classical writer to describe melancholia. Aristotle (384 BCE–322 BCE) described not only melancholia, but—very likely—manic-depressive illness.11 Indeed, as with Avicenna, Aristotle’s concept of melancholia probably “included what today would be called mania.”12

And, about a century before Avicenna, the Iraqi-Arab physician ibn Imran (died c 906 CE) wrote a treatise describing melancholia and manic-depressive illness in strikingly modern terms.13 Notably, Avicenna may have been among the first physicians to document that anger is often a transitional state from melancholic depression to mania—implicitly recognizing the switch phenomenon.14

Melancholia, black bile, and the heart

The term “melancholia” is derived from 2 Greek words: melas and chole, meaning “black” and “bile,” respectively. Black bile is one component of the theory of the 4 humors, which dominated medical theory and practice from the time of Hippocrates (ca 460–c. 370 BCE) until the middle of the 19th century.15 Avicenna’s concept of melancholia owed much to this theory, and attributed melancholia to “an excess of black bile in the brain.”3 We can set aside this long-outdated humoral theory without diminishing the importance of Avicenna’s clinical description of melancholia and its relevance to our modern construct of mixed states. Furthermore, we should take careful note of Avicenna’s view of melancholia as a multi-system disease, particularly one involving the heart3:

[I]n most cases, some heart diseases initiate a process which ultimately leads to depression; and [even] if the cause of depression in some cases originates from the brain, [the] heart will be involved and make the problem worse.

It is really only within the last century or so that Avicenna’s intuition has been partially validated, although the specific mechanisms he posited differ considerably from those of modern medicine. Recent studies show that, indeed, there are important connections between clinical depression and cardiac disease. For example, approximately 20% of patients with ischemic heart disease (IHD) suffer from comorbid depression, and depression is an independent predictor of IHD in otherwise healthy individuals, even after controlling for risk factors such as smoking.16

Serious psychiatric diseases have plagued mankind for at least the period of recorded human history, and probably much earlier. Although I have cited sources going back to classical Greece, narratives from the Hebrew Bible suggest that melancholia and various mixed affective states were recognized even in Biblical times, eg, in the condition ascribed to King Saul.17 The medieval physician and philosopher Avicenna appears to have described a type of mixed affective state—embodying manic, depressive, and psychotic features—a millennium before institutional psychiatry existed. To be sure, the humoral mechanisms he posited are no longer credited, but his clinical observations of melancholic patients are largely consistent with those of modern-day clinicians. In short, the notion that melancholic depression, mixed states and manic-depressive illness are inventions of modern-day psychiatry is, historically speaking, flatly wrong. Finally, Avicenna’s description of melancholia presenting as a mixed state has important implications for our modern-day nosology and our treatment of mood disorders.

Acknowledgment: I wish to express my appreciation to my friend and colleague, Dr Nassir Ghaemi, for his valuable comments, suggestions, and perspectives on an earlier draft of this article.