The Light-er Side of Treating Seasonal Affective Disorder

Seasonal affective disorder affects 1% to 3% of the North American population. Evidence exists for the efficacy of high-intensity bright, fluorescent light. Pharmacological management with SSRIs has shown equivalent efficacy to light therapy. How can these two therapies be combined? What other therapies are available? 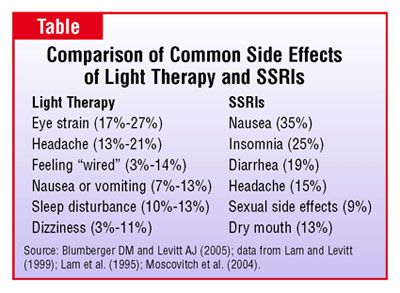 Table. Side effects of light therapy

Rosenthal et al. (1984) first described seasonal affective disorder (SAD) as a pattern of recurrent depressions with a winter onset and a full remission the following summer. The emergence of treatment, specifically light therapy, was met with a mixture of enthusiasm and cautious skepticism. However, there is now substantial evidence to support its efficacy. This paper will review the treatment of SAD with a focus on new developments in the area.

The clinical presentation of SAD frequently includes the prominence of reverse vegetative or atypical symptoms (Rosenthal et al., 1984). Of these symptoms, increased appetite, carbohydrate craving, weight gain and hypersomnia are most commonly reported in large samples of patients with SAD. Prevalence estimates suggest that the condition occurs in 1% to 3% of the North American population (Blazer et al., 1998; Levitt and Boyle, 2002) with a female to male sex ratio of 1.6:1 (Lam and Levitt, 1999). Although initial research seemed to suggest a high frequency of bipolar disorders among patients with SAD (Rosenthal et al., 1987; Thompson and Isaacs, 1988), this has not been confirmed in subsequent reports (Levitt and Boyle, 2002; Thalen et al., 1995; Wehr et al., 1991).

Other investigators have proposed other possible mechanisms including the role of melatonin (Rosenthal et al., 1988), the photoperiod and latitudinal variation (Levitt and Boyle, 2002; Rosen et al., 1990), and the roles of other neurotransmitters (Oren et al., 1994; Rudorfer et al., 1993). However, there appears to be no single mechanism that can explain the syndrome entirely at this point in time.

Light therapy is an effective first-line treatment for SAD. It has proven effectiveness compared to psychopharmacological treatments and to various placebo controls. The basic parameters of treatment include intensity, wavelength, duration of daily exposure and timing of light exposure. Benefits of treatment are usually seen within two to seven days, and the response rate ranges from 60% to 90% (Lam and Levitt, 1999). Bright light treatment with a fluorescent light box (minimum 2,500 lux) has been most widely studied and its benefits more firmly validated than other modalities. However, there is some evidence for the use of head-mounted units (HMUs) (Levitt et al., 1996; Meesters et al., 1999) and dawn simulators (Avery et al., 2001). A recent meta-analysis, including the eight most rigorous studies of fluorescent light box therapy, found an effect size of 0.84 (95% confidence interval, 0.60 to 1.08) (Golden et al., 2005). This is similar, if not superior, to the treatment effect sizes found in nonseasonal depression.

Various HMUs have been developed. These units may use either fluorescent, halogen or LED light sources. The practical advantage to using HMUs is that patients can move about freely while having their treatment. Most studies of HMUs have failed to show a benefit over placebo, although response rates have been in the range of 60% to 70% (Joffe et al., 1993). Dawn simulation involves the administration of lower-intensity light (max 250 lux) in the 30 to 90 minutes prior to rising in the morning. There have been five well-designed studies demonstrating the effectiveness of dawn simulation, all from the same research group (Avery et al., 2001).

Individuals with clear recurrent winter depressions with full summer remissions and the presence of reverse vegetative symptoms respond best to bright light therapy (Levitan, 2005). In addition, situations where pharmacological intervention is risky should warrant the consideration of bright light therapy. Insurers may not cover the expense of a light therapy device; therefore, clinicians must be cognizant that cost of a unit ranges between $250 and $450 (Lam and Levitt, 1999). Ultraviolet light can be damaging to the eyes, therefore, ultraviolet light filters should be used (Lam et al., 1992). If there is a pre-existing history of ophthalmologic conditions, systemic illnesses affecting the retina or concurrent use of a photosensitizing medication (e.g., lithium [Eskalith, Lithobid], chloroquine [Aralen], phenothiazine [Phenerzine], melatonin, hypericum, 8-methoxypsoralen), patients should be referred to an ophthalmologist for baseline screening and routine monitoring (Lam and Levitt, 1999). Clinicians need to be aware of the potential risk of induction of hypomania or mania in patients with a bipolar diathesis (Bauer et al., 1994; Chan et al., 1994).

To maximize compliance and practicality, light therapy should be initiated with a fluorescent light box that delivers an intensity of 10,000 lux for a half hour as soon as possible upon awakening and before 10 a.m. The patient should position the light box according to the manufacturer's instruction and use it the same time each day as much as possible.

The side effects of light therapy are minimal (Table) (Levitt et al., 1993). If patients are unable to tolerate the treatment due to agitation, headache or nausea, the intensity of the treatment can be reduced by increasing the distance from the light box or changing the duration of therapy.

Treatment response to light therapy can be rapid, starting with two to four days (Lam and Levitt, 1999). Most studies have been of short duration, although some investigators have suggested that four weeks of treatment may be optimal (Eastman et al., 1998; Ruhrmann et al., 1998). As relapse rates are high after discontinuation, maintenance of treatment through the winter season should be considered. There is also evidence that suggested relapse can be prevented with the addition of citalopram (Celexa) after response to a course of light therapy (Martiny et al., 2004). The use of dawn simulation and HMUs should be considered a second-line option.

Most studies of the pharmacological treatment of depression in SAD have involved SSRIs. Two large, randomized, controlled studies using fluoxetine (Prozac) and sertraline (Zoloft) have shown that treatment response is consistent with the response observed in nonseasonal depression (Lam et al., 1995; Moscovitch et al., 2004). A recent comparison of medication (fluoxetine) and light (10,000-lux fluorescent box) demonstrated no difference in response rate to both treatments, in the range of 60% (Lam et al., in press). A smaller study of sertraline and bright light therapy showed similar benefits of both treatments (Ruhrmann et al., 1998). Buproprion (Wellbutrin) and tranylcypromine (Parnate) have shown positive effects in small open trials (Dilsaver and Jaeckle, 1990; Dilsaver et al., 1992). There are some very limited controlled data suggesting moclobemide (Aurorix) may be effective (Lingjaerde et al., 1993; Partonen and Lonnqvist, 1996).

The effect of exercise on mood has been investigated. Interestingly, there are some unreplicated data that show one week of one-hour, morning walks can improve symptoms (Wirz-Justice et al., 1996). Therefore, it is possible that a combination of increasing natural light exposure and exercise may be beneficial.

Very little data exist on the psychotherapeutic management of SAD. There has been great advancement in the evidence base for certain psychotherapeutic modalities in the treatment of depression and a relative paucity of literature looking at seasonal depression. A preliminary analysis of an ongoing randomized, controlled trial investigating cognitive-behavioral therapy (CBT) versus light therapy has shown promising results (Rohan et al., 2003). The role of CBT as a first-line agent or an adjunct is yet to be determined, but it is likely that CBT will have a similar role in SAD as it does in the treatment of major depression.

Seasonal affective disorder is a well-defined subtype of depression. Delineating the etiology and pathogenesis of this subtype of depression is still in its early stages. Light therapy is a very effective treatment with clearly defined parameters. Timing and duration of treatment require further evidence. There is emerging evidence on the role of combining light therapy with pharmacological treatment. The bulk of data suggest that first-line therapies for nonseasonal depression are effective in the seasonal subtype; however, SSRIs are the only well-validated class of medications that have been studied.

Dr. Blumberger is a resident in the department of psychiatry at the University of Toronto.

Dr. Levitt is a research fellow in the department of psychiatry at the University of Toronto. He is also president of the Society for Light Treatment and Biological Rhythms.