What is the possibility that the very illness we’re trying to improve is getting worse-with treatment? 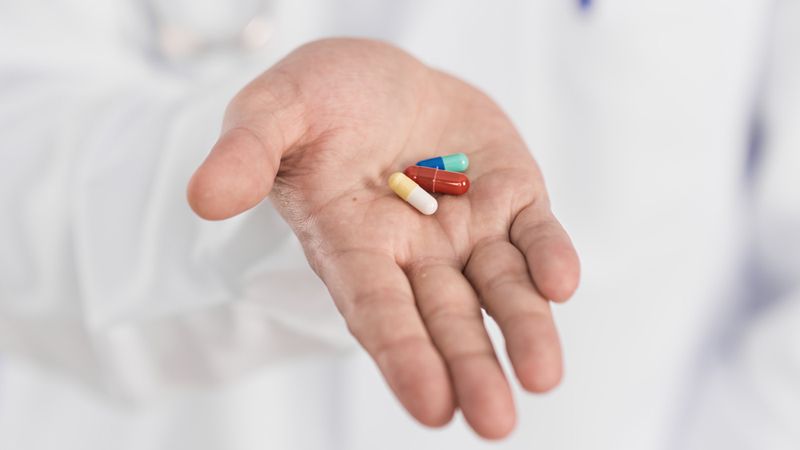 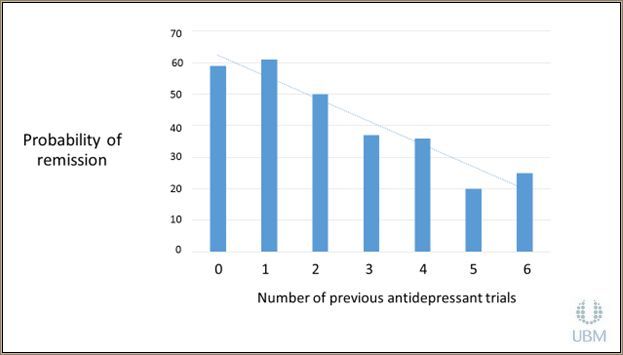 Ms. O comes to see you for depression. How many antidepressants has she had so far? The answer has a strong impact on her outcome in your care. As shown in the Figure, the more antidepressants Ms. O has received, the less likely she is to respond to them.1 Why?

3. It’s the antidepressants themselves: it is possible that we are creating treatment resistance with each repeated trial?

A and B are clearly true, but now it appears that C may be as well. And that means trouble: iatrogenic worsening of the very illness we’re trying to improve.

In a recent analysis of patients with bipolar II disorder under treatment with venlafaxine or lithium, Amsterdam and colleagues1 found that the odds of responding or remitting decreased with each increase in the number of prior antidepressants the patient had received during her or his lifetime. The Figuredisplays their remission data (my extraction; any errors are mine).

Importantly, this reduction in likelihood of response was found among those who were randomized to receive lithium for their bipolar II depression, as well as those who were randomized to venlafaxine. In other words, receiving antidepressants in the past was associated with being less likely to respond to lithium once someone finally treated their bipolar II disorder with a mood stabilizer. And it was proportional: the more antidepressants, the lower the chance of response or remission.

But again: is that because patients who are less likely to respond in the first place (eg, due to genetic factors or lifetime trauma) will receive many antidepressants? Or because associated factors such as early onset explain this nearly linear decline?

First, do no harm.

Or are the antidepressants causing the treatment resistance? One way to determine this would be to factor out all the potential associations and see if the relationship with the number of prior antidepressant trials remained. The authors report: “Even after accounting for the effect of treatment and the baseline variables associated with prior medications [including age of onset and severity], there was a significant association between the number of prior antidepressant trials and the likelihood of remission (OR=0.68, B=−0.39, SE=0.13; Ï2 =9.71, P=.002).”1

Can we trust this research group? Do they have a bias against antidepressants in bipolar disorder, for example, and this is part of an effort to discredit them for use in bipolar II? Quite the opposite: for years, Dr. Amsterdam and his group have been publishing studies that support antidepressant monotherapy in bipolar II disorder.(eg, 2) So, listen to their conclusions:

Antidepressant drugs may produce a persistent physiological adaptation over time that manifests as progressive tolerance, and this eventual loss of effectiveness may result from repeated antidepressant administration per se.1

The suspicion that antidepressants (not just mechanisms A and B above) might lead to treatment resistance has been around for over a decade,3 including in earlier analyses by Amsterdam and colleagues.4,5 This suspicion is supported by a study in which a decrease in the likelihood of achieving a response was not observed for subjects who were randomized to cognitive therapy instead of an antidepressant.6

In the new Amsterdam study, the authors point out that “while the current results suggest that the number of prior antidepressant trials is a negative predictor of future venlafaxine and lithium response, this does not appear to be the case with prior moodstabilizer trials.”1 [emphasis mine]

What does this mean for clinical practice? Antidepressants are generally regarded as considerably lower in risk than the mood stabilizers with antidepressant effects: lamotrigine, for example, which causes practitioners to worry about the 1 in 1000 risk of Stevens-Johnson syndrome (some references put that risk closer to 1 in 3000.7) But these new data suggest that for at least some patients, an unrecognized risk of antidepressants is the potential to induce treatment resistance-a risk that might be avoided by turning to a mood stabilizer before a series of antidepressants are tried.

Treatment of patients who have subthreshold bipolarity8 with lamotrigine, perhaps even before a single antidepressant is tried, may have a better risk/benefit ratio than previously recognized. Obviously, further research is much needed here. In the interim, these new data strongly support a vigilant search for bipolarity before prescribing a first-or second, or third antidepressant. First, do no harm.