Research over the past 2 decades has demonstrated that ADHD occurs frequently and causes considerable suffering in patients and their families. ADHD begins in early childhood and persists through adolescence and into adulthood in 70% of those affected.

Research over the past 2 decades has demonstrated that ADHD occurs frequently and causes considerable suffering in patients and their families. ADHD begins in early childhood and persists through adolescence and into adulthood in 70% of those affected. Two large epidemiological studies in the US have placed its prevalence at 8.7% in children and 4.4% in adults.1

In addition to the well-known, emotionally costly symptomatology at the individual level, a review paper just presented at the 2012 American Psychiatric Association (APA) meeting found that ADHD was also associated with a substantial impact on education costs among children and adolescents and on income and productivity losses among adults, ranging from approximately $86 billion to $138 billion dollars.2 Therefore, not surprisingly, there is an increased interest in all aspects of the illness, and the number of papers being published has grown every year for the past decade (Figure 1).

Such a large body of literature makes it challenging for busy clinicians to discern which of the hundreds of articles they should read to keep current with relevant, clinically applicable findings. In that spirit, this article reviews the most recently published ADHD literature as well as some of the presentations from the May 2012 APA meeting in Philadelphia and provides a clinical perspective on how findings may apply to everyday practice.

ADHD and cardiovascular risk of medication

The effects of stimulants on the cardiovascular system of healthy individuals are established. In therapeutic dosages, these agents increase blood pressure and heart rate, but such changes are not clinically meaningful.1 The rise in stimulant prescriptions and a renewed examination of sudden death case reports provided the stimulus for the FDA and its Canadian counterpart and the American Heart Association to review concerns about potential stimulant cardiotoxicity. In response to concerns, these agencies issued clinical guidance recommendations that were not universally accepted and became controversial. Following discussions with professional associations of physicians, these guidelines were ultimately reversed.

A 2009 large case-control study by Gould and colleagues3 found an association between the use of stimulants and sudden unexplained death among children and adolescents. Given the level of uncertainty in the field, several investigators launched a number of studies with varied methodological approaches geared toward generating additional data to clarify the issue.4-9 The resulting reports were published in 2011 and 2012 and are outlined in the Table.

Effect sizes of diet, omega-3, and stimulants in children with ADHD

Gould and colleagues reported a significant association, or “signal,” between sudden unexplained death and the use of stimulant medication, specifically methylphenidate. They acknowledged that the data had limitations that precluded a definitive conclusion, but their findings drew attention to the potential risks of stimulant medications. Since the publication of this study, other researchers have pointed to additional methodological issues that may have biased results away from the null.5 Furthermore, a number of well-designed large studies have not replicated this signal.

Practical tip: Psychotropics in general should not be prescribed for patients with current or past cardiac illness without obtaining medical clearance and coordinating follow-up care with a specialist. In such patients, a benefit-risk assessment determines whether medications should be recommended. Is there, however, a risk of significant cardiotoxicity when stimulants are prescribed in usual therapeutic doses for otherwise normal individuals?

Healthy individuals, in particular children and young adults, do not require specific cardiac testing before initiating treatment, and routine age-appropriate follow-up appears sufficient in the absence of symptoms. Since patients are now taking ADHD medications for extended periods, it is prudent to routinely reassess cardiac history status and to obtain consultation should any cardiovascular symptoms develop.

ADHD and co-administration of antipsychotics

There has been increasing off-label use of a combination of stimulants and antipsychotics, possibly in response to the challenge of having to treat complex cases and the paucity of effective monotherapy for symptoms.10 Few studies have examined this combination strategy, but an article just published suggests that there may be industry interest in exploring the role of molindone in children with comorbid conduct problems.11

Practical tip: ADHD is highly comorbid with conditions that result in anger and aggression, such as affective and conduct disorders. For patients who have comorbid affective disorder and ADHD, the addition of an antipsychotic may be indicated to address comorbid core symptoms. For most other concurrent disorders, particularly in youths, there is less evidence for the use of antipsychotics. Thus, the decision to recommend these agents for patients without affective disorders but who nonetheless show high impulsivity and aggression must take into account a careful benefit-risk assessment of the potential severe adverse effects of antipsychotics.13 In fact, experts support the use of psychosocial interventions and parent education and training before the use of a medication for maladaptive aggression at every stage of treatment, from diagnosis to maintenance to medication discontinuation.14

Revisions to the ADHD diagnostic criteria in DSM were discussed at the 2012 APA annual meeting.15 According to the task force, the following changes are likely but have not been finalized16:

• Change the examples in the items, without changing the exact wording of DSM-IV, to accommodate a life span relevance of each symptom and to improve clarity

• Still under consideration: adjust the cut-off point for diagnosis in adults

Practical tip: Overall, the proposed DSM-5 changes in diagnostic criteria do not appear to be signif­icant enough to have great impact on the day-to-day practice of child psychiatry. However, for those colleagues who had strictly followed DSM-IV and had been reluctant to diagnose the condition in patients with little evidence of dysfunction before age 7 despite other criteria being met, the proposed revisions will resolve this conflict.

All child and adolescent psychiatrists have interviewed at least 1 parent who strongly asserted that this or that type of food caused their offspring to become more acutely symptomatic, while eating other types of foods improved symptoms. The therapeutic and pathogenic theoretical roles of foods in ADHD, however, have fallen into disfavor since the 1980s, and most clinicians have tended to take parental reports regarding dietary effects with a certain degree of skepticism.

The results of 2 recent analyses may validate such previously discredited parental reports to some extent. Bloch and Qawasmi17 found that omega-3 fatty acid supplementation, particularly with higher doses of eicosapentaenoic acid, was modestly effective for treating ADHD. Nigg and colleagues18 studied the role of diet and food colors and found that restriction diets reduced ADHD symptoms and that an estimated 8% of children who have ADHD may have symptoms related to synthetic food colors.

Practical tip: An emerging body of evidence has concluded that certain artificial dyes used in food seem to increase hyperactivity and their elimination from the diet of children may improve behavior and attention, although the effect sizes of these approaches are much lower than those of stimulants (Figure 2). These data are intriguing but do not yet support routine dietary assessments.

On the other hand, clinicians should not dismiss unsolicited parental reports of food effects as invalid; explore these reports further and consider recommending a diet that excludes the posited offending agent. Furthermore, since fatty acids have a benign adverse-effect profile, they could be used to supplement/augment usual medications or they could be recommended in cases in which families are averse to prescription drugs but not opposed to over-the-counter options. 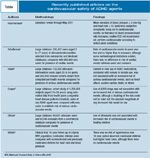 Recently published articles on the cardiovascular safety of ADHD agents

Obtaining the first driving license generally causes exhilaration in teenagers and anxiety in parents. For ADHD patients, the newly acquired independence that driving brings can also carry additional risks, because there is evidence that ADHD may impair motor vehicle operation. Stimulant medication, however, appears to improve driving skills in persons with ADHD.

Biederman and colleagues19 conducted a randomized, double-blind, 6-week, placebo-controlled, parallel-design study to determine the effect of lisdexamfetamine (LDX) on driving performance in a validated driving simulation paradigm. Sixty-one 18- to 26-year-old outpatients of both sexes with ADHD were randomized to receive LDX or placebo after a baseline driving simulation. They completed a second driving simulation 6 weeks after beginning the drug or placebo. LDX treatment was associated with significantly faster reaction times and a lower rate of simulated driving collisions.

In another study, Cox and colleagues20 investigated whether methylphenidate delivered through a long-acting transdermal system (MTS) would reduce collision rates of young adult drivers with ADHD. Seventeen young adults completed this open-label, crossover design study in which drivers were randomly assigned either to no medication for 3 months and then MTS for 3 months or to the reverse sequence. In-car video monitoring of routine driving occurred during these 6 months. Participants who were receiving MTS had fewer video-recorded collisions and other problematic driving events.

Practical tip: Distracted driving has become a public health concern, eliciting comments from federal officials such as Secretary of Trans­portation Ray LaHood, who has called it “an epidemic on America’s roadways.” Psychiatrists have not routinely addressed the issue of driving with their ADHD patients. Given the compelling evidence, however, families who are considering medication for their adolescent should be made aware of these data because they could offer improved reassurance that the risk to bene-fit ratio for symptomatic driving-age youths favors the use of ADHD medication.

The overwhelming number of articles published about ADHD every year necessitates that clinicians rely on aggregators to highlight the most significant articles in their quest to improve the quality and options of care offered to patients. This article outlines the latest research on topics of high importance to the field. Nothing can replace, however, a direct examination of the data, so readers are encouraged to review the original reports for those topics they have found most interesting.