Psychedelics and the Future of Psychiatry

Welcome to the psychedelic renaissance. 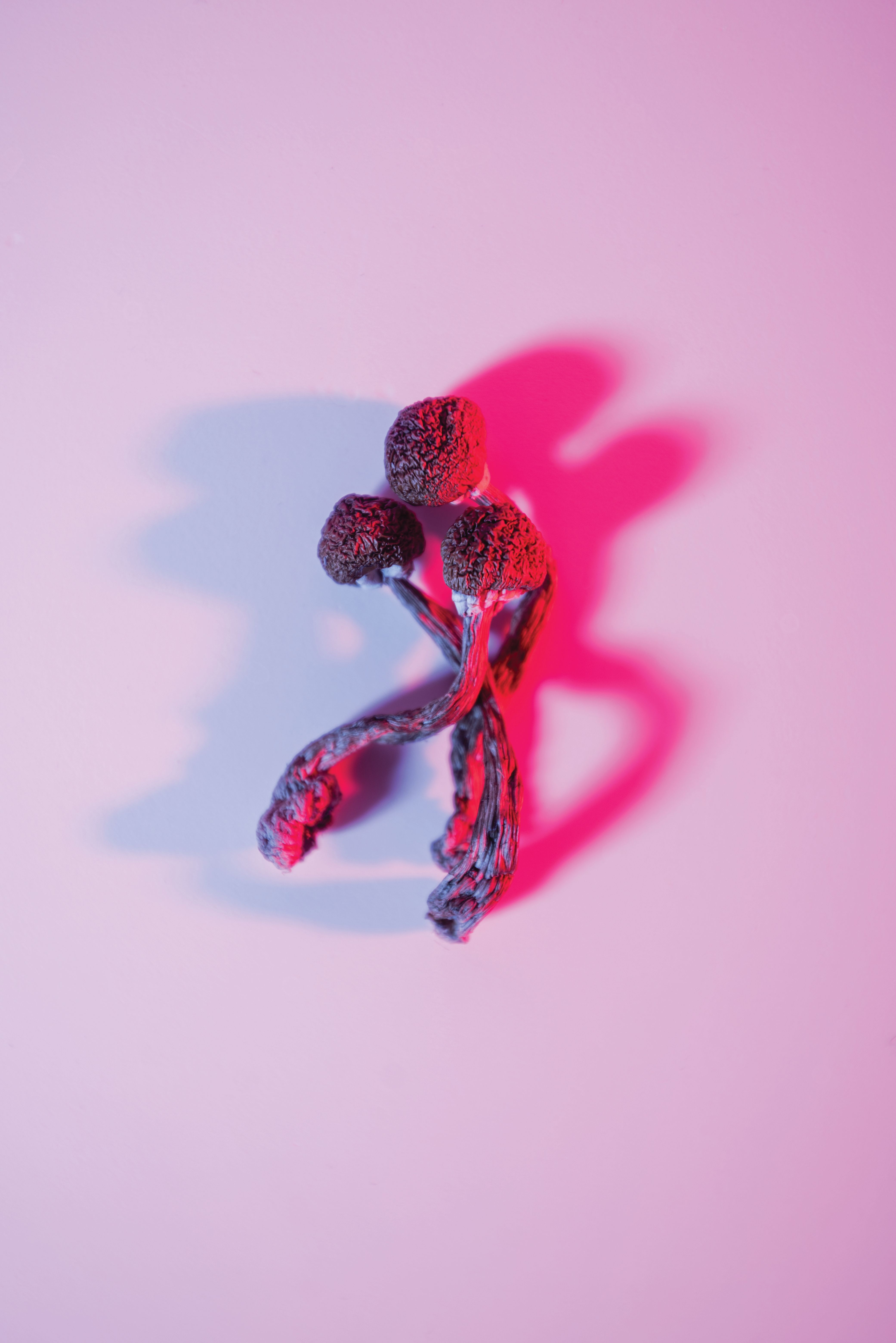 Over the past several years, we have witnessed a psychedelic renaissance, and a growing body of evidence suggests that several psychedelic compounds hold strong therapeutic potential for a wide array of mental health conditions.

Once dismissed as dangerous and having little therapeutic potential, psychedelic drugs are gaining mainstream acceptance. Research data continue to demonstrate that, on the whole, these medicines are not only safe, but mostly well tolerated. Although more research is needed to better understand safety, especially in the context of at-risk conditions, these favorable safety profiles are enabling deeper exploration of these medicines.

The term psychedelic was coined in the 1950s by psychiatrist Humphry Osmond, MD, and it literally means “mind-manifesting.” This class of drugs produces changes in perception, thought, and mood with minimal disorientation or confusion. Unlike alcohol, benzodiazepines, and barbiturates, psychedelics do not lead to a slowing of cognitive processes or an acceleration of cognition as seen with stimulants.

Several US states and cities are in the process of legalizing or decriminalizing psychedelics like psilocybin, 3,4-methylenedioxymethamphetamine (MDMA), lysergic acid diethylamide (LSD), and others for therapeutic or recreational purposes. In 2020, the Oregon Ballot Measure 109 was passed,1 allowing licensed service providers to administer psilocybin products to individuals 21 years and older and making Oregon the first state to legalize psilocybin. The drug will not be available commercially or for home-based use, as strict regulations are in place to ensure psilocybin will be used only under the supervision of trained facilitators. This was a major milestone in psychedelic medicine, as it opened the door for more widespread access to psilocybin therapy in a safe and legal manner.

The US Food and Drug Administration (FDA) has also shown interest in prioritizing the approval of certain psychedelic drugs. Both psilocybin- assisted psychotherapy for major depressive disorder (MDD) and treatment-resistant depression,2,3 as well as MDMA-assisted psychotherapy for posttraumatic stress disorder (PTSD),4 have received the breakthrough therapy designation from the FDA to fast-track the approval process because of the growing clinical evidence demonstrating substantial improvement over currently available therapies.

Safety Issues and Scaling Up

The growing research results continue to confirm that psychedelic medicines are not only safe, but well tolerated by the majority of recipients. A psilocybin study found that cases of mental health complications following a psychedelic are rare (<0.1%) even in vulnerable populations (<0.2%), and rarer still with proper screening.5 Another study examined the classical psychedelics, LSD, psilocybin, and mescaline. It found no evidence of increased rates of mental health problems; in fact, it demonstrated psychedelic use was associated with reduced psychological distress and suicidality.6 Additionally, results of studies examining psychedelic substance use patterns in humans as well as self-administration in animals suggest that classic psychedelics possess little or no abuse liability and may even be antiaddictive.7

More research is still needed to fully understand safety, especially in the context of at-risk conditions and mechanisms of action. However, the favorable safety profiles are opening doors for deeper exploration of these medicines.

MDMA-assisted psychotherapy, the psychedelic treatment closest to receiving FDA approval, is currently undergoing phase 3 clinical trials in patients with PTSD.9 The study included 90 patients with severe, chronic PTSD from a variety of different causes (eg, abuse, combat, sexual trauma). It is worth mentioning that this was a treatment-resistant group, meaning patients had suffered with PTSD for an average of 14 years without relief. All participants completed a 12-week treatment program composed of 3 full-day sessions, during which they received either MDMA or a placebo, plus weekly nondrug psychotherapy sessions. No serious adverse effects were detected beyond transient, mild symptoms during drug treatment such as nausea or sweating. No increases in suicide risk or potential for abuse were noted in the MDMA group relative to placebo. Two months after treatment, 67% of the MDMA cohort no longer qualified for PTSD diagnosis, compared with 32% of the placebo group. In addition, 88% of those in the MDMA group experienced a clinically significant reduction in symptoms (Figure 1).9 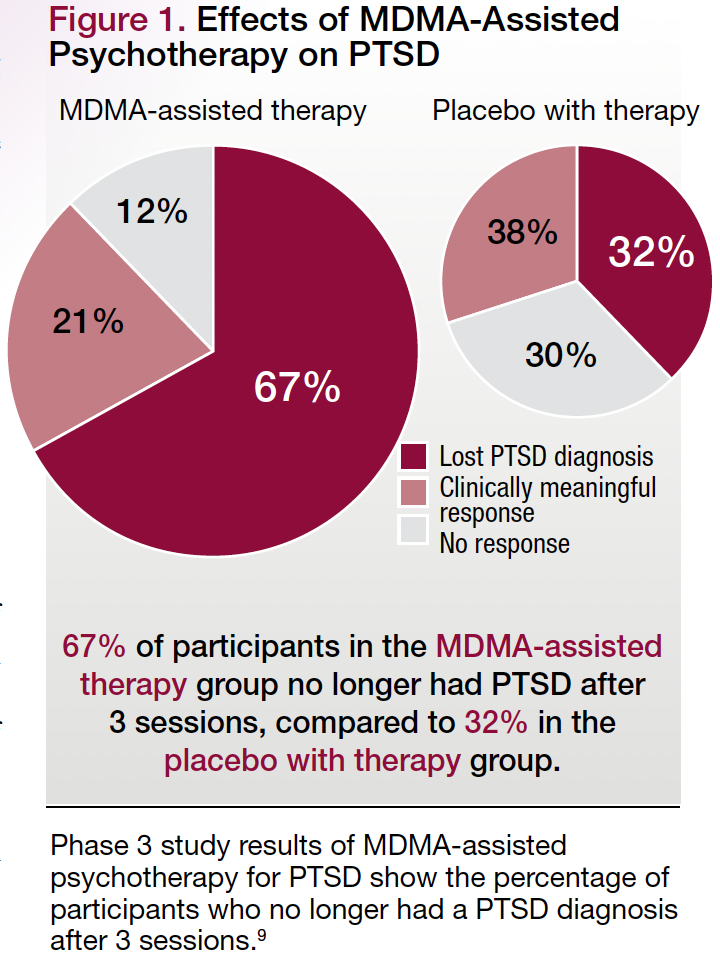 MDMA is unique in its ability to promote acceptance of and empathy for self and others. In addition to elevating oxytocin levels, MDMA stimulates the release of the monoamines serotonin, norepinephrine, and dopamine, resulting in improved mood and increased sociability.10 Brain imaging after administration of MDMA shows there is decreased amygdala activation and reduced fear response,11,12 allowing the patient to emotionally engage in therapy without becoming overwhelmed by anxiety or difficult emotions. The combination of medication plus psychotherapy represents a new frontier for the FDA, with unique challenges to be addressed such as therapeutic approaches and therapist training.

Psilocybin, the main psychoactive component of “magic mushrooms,” is currently in phase 2 clinical trials for MDD. As a classic psychedelic, it is an agonist of serotonergic 5-HT2A receptors in the brain,13 which are particularly abundant in the cortex and regions associated with cognitive functions and social interactions.14 Stimulation of this receptor has been directly linked to cognitive flexibility, enhanced imagination, and creative thinking.15

In pivotal study results, 71% of individuals with MDD who received 2 doses of psilocybin were treatment responders, and half of the participants entered remission (Figure 2).16 Some follow-up studies after therapy, although small, have shown lasting benefits.17,18 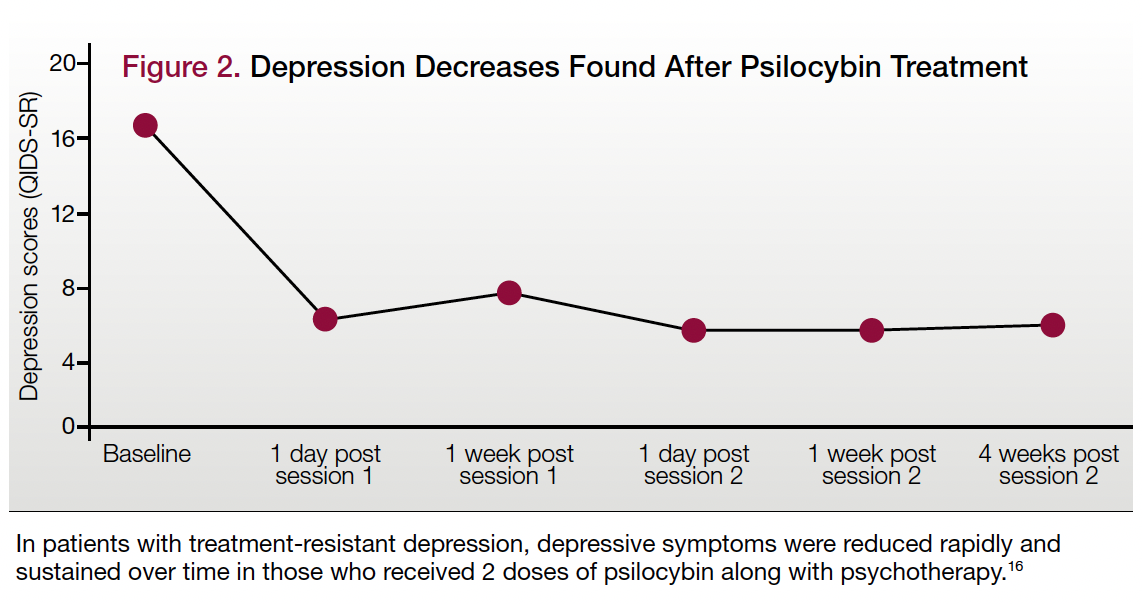 Psychedelic medicine is forging ahead as a promising new treatment paradigm, in which psychedelics, paired with psychotherapy, have the potential to treat various mental health conditions. Preliminary findings show successful results for these treatments, with significant clinical improvements and few—if any—serious adverse effects. The emerging results likely have implications for future psychiatric research, education, and policy—and most importantly, they are poised to offer new therapeutic options and improve the lives of those we serve.

Dr Robison is a board-certified psychiatrist and Chief Medical Officer of Novamind. He is the co-founder of Cedar Psychiatry and serves as the Medical Director for the Center for Change, a leading eating disorders center. Dr Robison previously served as a coordinating investigator for the MAPS-sponsored MDMA-assisted psychotherapy study of eating disorders.

7. Heal DJ, Gosden J, Smith SL. Evaluating the abuse potential of psychedelic drugs as part of the safety pharmacology assessment for medical use in humans. Neuropharmacology. 2018;142:89-115.