The average patient with bipolar disorder struggles with sleep disorders. Here's how you can help. 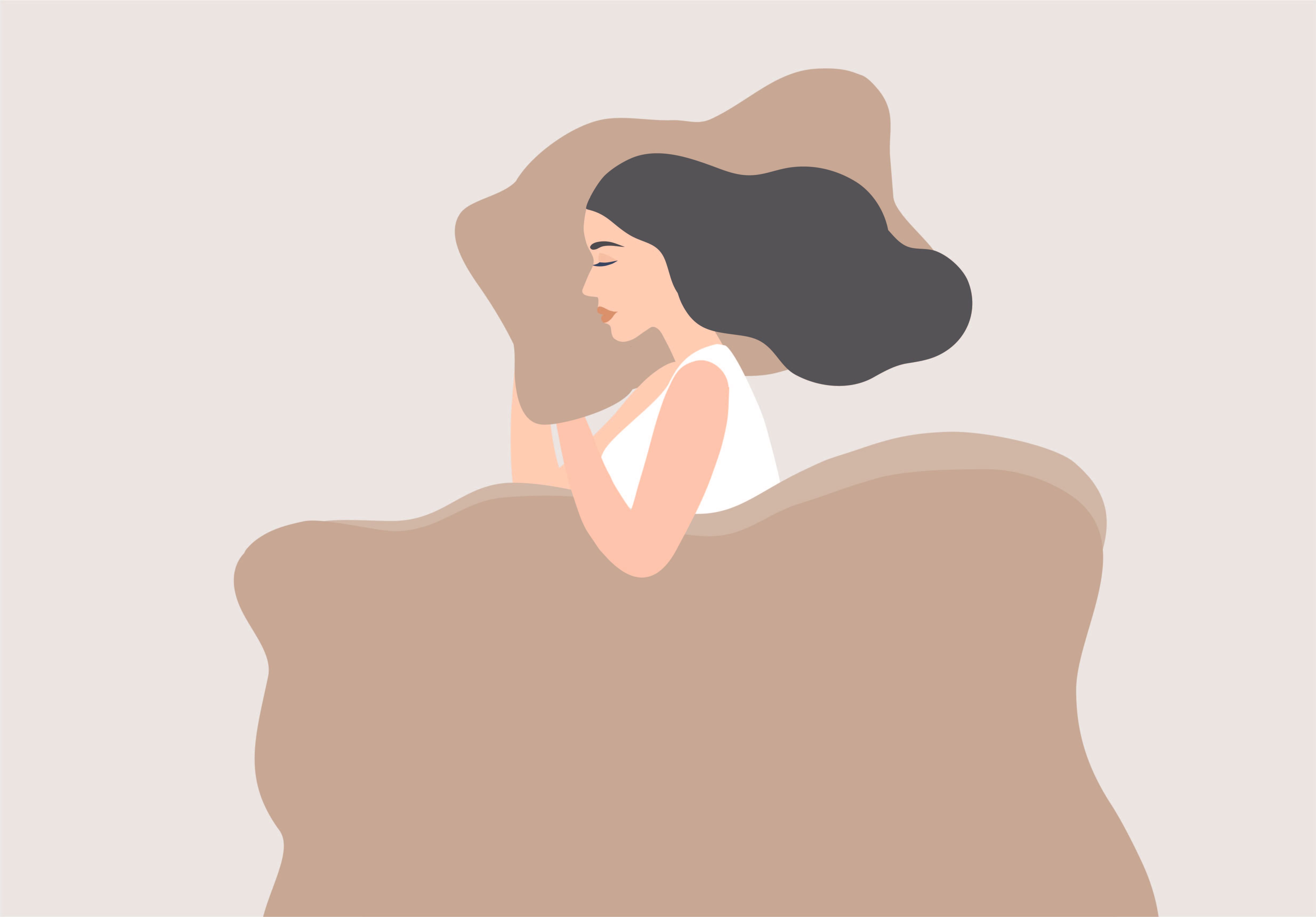 The average patient with bipolar disorder (BD) spends half their life struggling with mood symptoms and the other half struggling with sleep.1,2 Insomnia persists in 70% of patients even when their mood is stable, and these sleep problems put them at risk for more episodes of mania and depression (Table 1).2 Some clinicians are liberal with hypnotics, while others prefer the lower abuse potential of sedating antidepressants like trazodone. Both these approaches have problems. Fortunately, there are also new therapies that improve mood and sleep by entraining the circadian rhythm (Table 2). 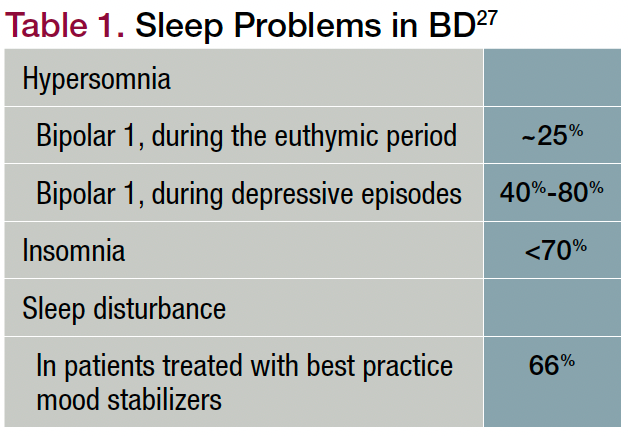 It seems intuitive that a benzodiazepine or z-hypnotic (eg, eszopiclone, zaleplon, zolpidem) could halt the progression of insomnia into mania, but the idea has never been adequately tested. These GABAergic hypnotics lack controlled trials in BD, and the few observational studies paint a mixed picture. A chart review of 278 z-hypnotic trials in adolescents with BD concluded that the drugs improved sleep in 40% to 60% of patients and did not lead to abuse with long-term use.3 On the other hand, reports document 30 cases of high doses of zolpidem and regular doses of alprazolam and triazolam inducing mania.4-6 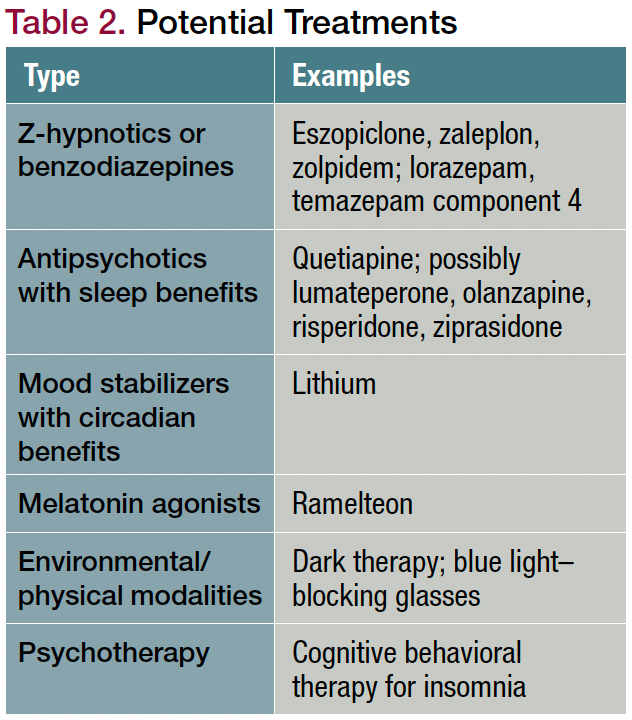 In contrast, clonazepam and lorazepam appear safer, with small controlled trials suggesting that these agents do not worsen, and may improve, manic symptoms (the benzodiazepines were not used as hypnotics in these trials).7 However, over the long term, benzodiazepines carry risks of tolerance and dependence, and long-term use may worsen cognition and mood in BD, according to nonrandomized studies that attempted to control for the confounding tendency to prescribe benzodiazepines in more severe cases.8,9

Another approach to insomnia in BD is to choose mood stabilizers with sedative effects. Many antipsychotics are sedating, but some have more meaningful benefits in sleep quality; these include quetiapine in particular, and possibly lumateperone, olanzapine, risperidone, and ziprasidone.10 Lithium is rarely sedating, but it does have positive effects on the circadian system, such as dampening the phase-advance (“night owl”) tendency that is associated with poorer health and greater risk of depression.11

Sedating antidepressants are more problematic, particularly in bipolar I disorder, in which the risk of manic induction is high. Most, including trazodone and mirtazapine, are associated with case reports of triggering mania. In a retrospective study, patients with BD who used sedating antidepressants for sleep were significantly more likely to develop mania and episode acceleration than those who took traditional hypnotics.12

Melatonin agonists have captured the interest of investigators because of their potential to realign the circadian system, which is often disrupted in BD. Pure melatonin failed to improve sleep, mania, or rapid cycling in 2 small controlled trials,13 but the melatonin agonist ramelteon has intriguing results from 3 industry-sponsored, randomized, placebo-controlled trials in BD. Although ramelteon failed to improve sleep or mania, it did prevent depression in patients who struggled with insomnia.

The first study tested ramelteon in 21 patients with acute mania and found a reduction in depressive symptoms but no benefit in mania or sleep.14 Next, ramelteon was tested in 83 patients with BD who had active insomnia but stable mood. For 6 months, they took either placebo or a nightly dose of ramelteon 8 mg. As in the first trial, ramelteon did little to improve sleep (there was only a nonsignificant trend), but it did lower the risk of depression, more than doubling the time to a new episode from 84 to 188 days (P = .02).15 A larger study attempted to replicate that finding, but the results were negative across all outcomes.16

One explanation for these intriguing results is that the positive trials enrolled patients with active insomnia, while the negative trial did not, suggesting that ramelteon might have preferential effects in patients with disturbed circadian rhythms. But then why didn’t the drug improve their sleep? These studies relied on subjective measures of sleep, and ramelteon has a poor track record on subjective outcomes. In primary insomnia, it improved subjective sleep onset by only 4 minutes over placebo and objective sleep onset by 9 minutes. Benzodiazepines showed the reverse pattern, improving subjective onset by 14 minutes but objective onset by only 4 minutes (placebo, by the way, is no dud, and improved sleep onset by 8 to 20 minutes).17

One thing to take away from this is the importance of setting realistic expectations when starting patients on ramelteon. This hypnotic is not like the others: It is relatively nonsedating and has no anxiolytic, amnestic, or rewarding effects. On the one hand, those qualities improve on its safety, but they are unlikely to endear it to patients with BD, who often want a hypnotic to quiet the anxious, racing thoughts that rev up as they try to fall asleep. Ramelteon will do none of that, but nor will it cause patients to fall, overuse their medication, or engage in complex sleep behaviors like cooking or driving in the middle of the night. One positive aspect that most patients appreciate is the lack of tolerance and withdrawal with ramelteon. Rather than wearing off, ramelteon’s sleep benefits built up over weeks to months in some studies.18

While ramelteon is a melatonin agonist, dark therapy is a behavioral treatment that enhances endogenous melatonin by keeping patients in a pitch-dark room overnight. Dark therapy was developed by Thomas Wehr, MD, who speculated that evening darkness might improve sleep and mania in the same way that morning light improves depression and circadian rhythms. In the 1990s, he recruited normal participants with mild sleep problems to the National Institute of Mental Health, where they stayed in a pitch-dark room overnight from 6:00 pm to 8:00 am. After a few weeks of this dark therapy, their sleep improved.19 Next, he turned his attention to BD, and found that the same protocol stabilized refractory rapid cycling.20

Further studies supported Wehr’s observation, but it was not until the discovery of blue light–blocking glasses that dark therapy became practical for everyday use. In theory, the physiologic changes associated with total darkness might be achieved by blocking blue light, because the receptor that regulates melatonin secretion—melanopsin—responds only to the blue spectrum. The hope in that theory is that patients might be able to practice dark therapy while still being able to see in the evening.

Psychiatrist James Phelps, MD, first tested that hope in private practice, and his results were later confirmed in a randomized, placebo-controlled trial in Norway. For the entire evening from 6:00 pm to 8:00 am, patients hospitalized with acute mania wore blue light–blocking glasses or, if sleeping or trying to sleep, stayed in a pitch-dark room without the glasses. Within a week, their mania improved with a large effect size (1.86) compared with a placebo group that wore gray glasses.21

The dark therapy protocol can be gradually relaxed after recovery, allowing patients to put the glasses on a few hours before bed to prevent future episodes. That relaxed protocol also improves the sleep, according to 3 randomized controlled trials in primary insomnia. Wearing blue light–blockers 1.5 to 3 hours before bed helped patients fall asleep earlier and stay asleep longer, and improved sleep quality as well as mood and cognition on the following days.22-24 However, blue light blockers do not have a strong sedative effect. In line with their circadian mechanism, they improve the regularity of sleep more than they improve subjective measures of insomnia.21

A critical step in dark therapy is finding glasses that filter close to 100% of blue light. Lenses that were tested in clinical trials include Uvex Skyper S1933X, Uvex Ultra-spec 2000 ($10 to $15) and, for more comfort at a higher price, glasses at lowbluelights.com ($50). More information on the nuts and bolts of dark therapy is available in the Psych Pearls podcasts from August and October 2021.25

Cognitive behavioral therapy for insomnia (CBT-i) is thought to work by stabilizing the circadian system, making it a natural fit for mood disorders. In unipolar depression, CBT-i improves mood and sleep, but the therapy is often avoided in BD because it requires patients to limit their time in bed, raising concerns that this sleep deprivation could trigger mania. In 2015, Allison Harvey, PhD, and colleagues at the University of California – Berkeley modified the CBT-i protocol to include a built-in safety valve for BD (CBT-iBD). The newer therapy limits bed restriction to no fewer than 6.5 hours.

CBT-iBD also includes techniques to address common circadian rhythm abnormalities in BD, such sleep inertia (a prolonged sense of grogginess in the morning) and nocturnal hyperactivity. To counter these sleep-disrupting tendencies, patients develop a wake-up routine encompassing bright light and energizing activity, and an evening wind-down routine in which the lights are dimmed and screen time ceases.

To test the therapy, Harvey recruited 58 patients with stable BD but active insomnia and randomized them to CBT-iBD or a psychoeducational therapy. At the end of the 8-week therapy, patients in the CBT-iBD group were sleeping better compared with controls, but more profound changes came later. After 6 months, those who learned CBT-iBD had an 8-fold reduction in mood problems, spending an average of 3.3 days in a mood episode vs 25.5 days for controls.2

Later, Bryony Sheaves, DClinPsy, BSc, CPsychol, and colleagues adapted CBT-iBD for patients with schizophrenia, major depression, and BD in an inpatient crisis unit. The 2-week program improved sleep and well-being, and it hastened discharge by 8.5 days compared to treatment as usual.26

It can be difficult to find therapists who practice CBT-insomnia, but the core program is available through a prescription app (Somryst) or a free, VA-sponsored app (CBT-i Coach). These programs can be adjusted for BD with the modifications described above.

The Young and Old

Dark therapy and CBT-i are safe in the young and old, and a few tips can help adapt these treatments for different ages. Adolescents often have severe night-owl tendencies, which can be corrected by having the patient wake up 15 to 30 minutes earlier each day and wearing blue light–blockers in the early evening (eg, 5:00 pm to 8:00 pm). Napping is common in older adults but is discouraged in the CBT-i protocol. One compromise is to have the patient eliminate naps during the therapy, and then gradually add them back in once regular sleep is restored. Then they can continue the naps as long as they do not cause a relapse into insomnia. Finally, for patients of all ages who are afraid of the dark, there are nightlights that emit zero blue light (at lowbluelights.com and Amazon).

Although no hypnotics are FDA approved in children and adolescents, lithium and several antipsychotics (eg, quetiapine) are approved for them. In the elderly, the risks of falls and cognitive impairment have placed most hypnotics on the “inappropriate” list of the Beers criteria, although ramelteon is well studied in older adults and approved by the Beers.17

Treating insomnia in BD is both an art and a science, requiring practitioners to balance the patient’s goal of rapid sedation with the more therapeutic approach of retraining the circadian rhythm. Circadian therapies like ramelteon, dark therapy, and CBT-insomnia have a slow build, but they promise more lasting and substantial benefits for mood and sleep than fast-acting hypnotics.

Dr Aiken is the Mood Disorders Section Editor for Psychiatric TimesTM, Editor in Chief of The Carlat Psychiatry Report, and director of the Mood Treatment Center. The author does not accept honoraria from pharmaceutical companies but receives royalties from PESI for The Depression and Bipolar Workbook and from W.W. Norton & Co for Bipolar, Not So Much: Understanding Your Mood Swings and Depression.

10. Monti JM. The effect of second-generation antipsychotic drugs on sleep parameters in patients with unipolar or bipolar disorder. Sleep Med. 2016;23:89-96.