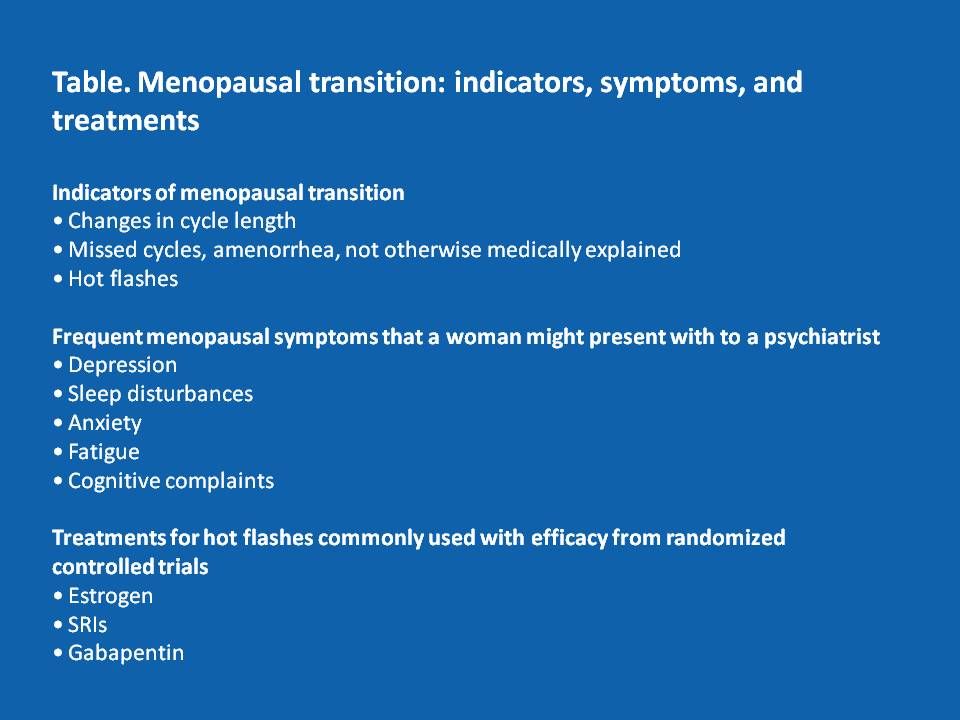 Dr Freeman is a speaker at this year’s PsychCongress in a presentation titled “Menopausal Depression and Premenstrual Mood Dysregulation.”

The term “perimenopause” refers to the time around this reproductive life cycle transition. More formally, the term “postmenopause” refers to the time 12 months or later after the final menses. Carefully conducted longitudinal studies have demonstrated that perimenopausal women are at higher risk for major depressive episodes than are premenopausal women, and that the risk is associated with hormonal variability.1,2 It appears that it is not the absolute levels of sex hormones such as estrogen that confer risk, but rather the variability that characterizes the menopausal transition.

Common symptoms other than depression and hot flashes that psychiatrists may frequently encounter include sleep dysregulation, cognitive complaints, fatigue, pain, and anxiety. The symptoms that accompany the menopausal transition are explained by the “estrogen withdrawal theory.”3 This theory can be applied to explain vulnerabilities to depressive symptoms during reproductive hormone variability-premenstrually, postpartum, perimenopause, and at times of fluctuating levels of estrogen and other gonadal hormones.

While the life cycle transition of menopause is characterized by hormonal vulnerability, hormone treatment is not necessarily the only treatment, although it may be used as a primary or adjunctive strategy. Estrogen is known to diminish hot flashes, but the risk-benefit profile is in question, and many women seek to avoid hormone therapies. Notably, there was controversy around the routine use of hormone replacement therapy after the release of findings from the Women’s Health Initiative study.4 This study showed that women who received estrogen plus progestin were at a slightly increased risk for coronary heart disease, stroke, pulmonary emboli, and invasive breast cancer. Further, they did not have the preventive health benefits that were widely believed to be associated with long-term hormone therapy.

A major depressive episode in the menopausal transition is treated similarly to an episode that may occur at any other time of life, with the caveat that antidepressants with serotonergic activity, particularly SSRIs and SNRIs, are also effective for the treatment of hot flashes.5 Other pharmacological strategies can be used to target hot flashes specifically, such as gabapentin.6 Sleep dysregulation associated with the menopausal transition can be specifically targeted with cognitive-behavioral strategies or medications to improve sleep, such as sedating antidepressants or hypnotics.7 The Tableserves as a summary of indicators of menopausal transition and menopausal symptoms discussed in this article.