“Romance”-It’s So Cold Out There

Was the business of the heart always so heartless? 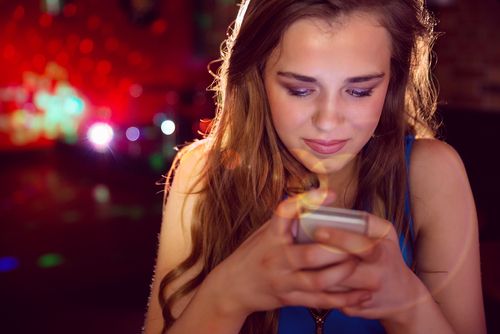 Three young people I love have all had their hearts broken in the past month.

There’s nothing new about broken hearts, but the electronic ingredients that were key to each of these 3 breakups added a unique 21st-century twist.

One of my “three” is in high school. In what now seem like the innocent pre-AIDS, pre-computer, (okay, pre-historic) days when I was in high school, you generally found out if your boyfriend was cheating if a friend told you she spotted him at the movies or mall with another girl. You didn’t find out by seeing a picture of him on Facebook or Instagram with somebody else the day after your big date. And neither did the rest of the world.

To get caught in those days pretty much meant you had to do your philandering locally. But your infidelities now can be pounced on halfway across the planet. Here’s (roughly) how one of my “three” promptly caught her cheater, who lives overseas.

“Mystery Woman” (A) posts and tags incriminating photo of Boyfriend (B) on Instagram, which C spots. C texts B, who texts that A is just a good friend. A Instagrams more photos. C messages A on Instagram: asks what’s up? C and A FaceTime. A tells all. A texts C screenshots of lurid and explicit e-mail exchanges between A and B. C FaceTimes B who still denies clear evidence. C “unfriends” B on Facebook and deletes him entirely from other apps.

A little electronic detective work and a willingness to confront all the painful details turned up a tale and trail of cruel and incontrovertible deceit. All those lies magnetically etched forever. C can’t-and didn’t- kid herself. She digitally subtracted B from her existence, but not from her heart.

The other two breakups both included spectacular digital knives to the heart. It’s tough out there.

I worry about my “three”-soon back to face the dating scene. That scene, at least in one popular bar in Manhattan’s Upper East Side, is described this way in a recent New York Times article1: it is “packed with good-looking semi-affluent millenials, downing craft beer and milling about in hungry-looking monosexual clusters.” No one actually speaks to anyone else. Their focus? Their own smartphones and, for many, the speed dating app, Tinder. Stripped from this particular app are the hyperbole-fueled lengthy profiles of dating sites of yore: you get just a face and a name and an age. If you like a guy’s looks, you can (with the flick of your finger to the right) start a “conversation” while you are busy carrying on chats with multiple other handsome new guys you just “met.” If you are displeased with the looks of the new guy Tinder has just served up, you can discard him with a left swipe. An unending panoply of potential Mr or Ms Rights, all at your fingertips. So efficient!

Was the business of the heart always so heartless?

Surely there is a psychological dark side to this dating battleground? Not everyone looks like (name your favorite movie star). Is there pleasure or connection in being just one of several women he’s texting? Do you need a course in marketing yourself to get a date these days?

This article was originally posted on February 23, 2015 and has since been updated.

Articles in this issue
Introduction: The State of Addiction Psychiatry
Opioid Use Disorder: Update on Diagnosis and Treatment
A Brief Review of Gambling Disorder and Five Related Case Vignettes
An Update on Street and Club Drugs: What Clinicians Need to Know
Marijuana and Madness: Clinical Implications of Increased Availability and Potency
The Therapeutic Alliance and Psychosocial Interventions for Successful Treatment of Addiction
Video Games: Recreation or Addiction?
The Hoarding of Animals: An Update
Reflecting on the Spiritual Man
Still Alice
Prescribing Opioid Analgesics: Are We Going in the Right Direction?
Suicide, Violence, and Mental Illness
Tips, Cautions, and Successes in Treating Bipolar Patients With Lithium
Too Few Psychiatrists for Too Many
The Making of a Homegrown Terrorist
Related Videos
Related Content