Thyroid as a Mood Treatment: Knowns and Unknowns

We see yet another confirmation that thyroid hormone has value as an augmentation agent. What does this mean for our patients? 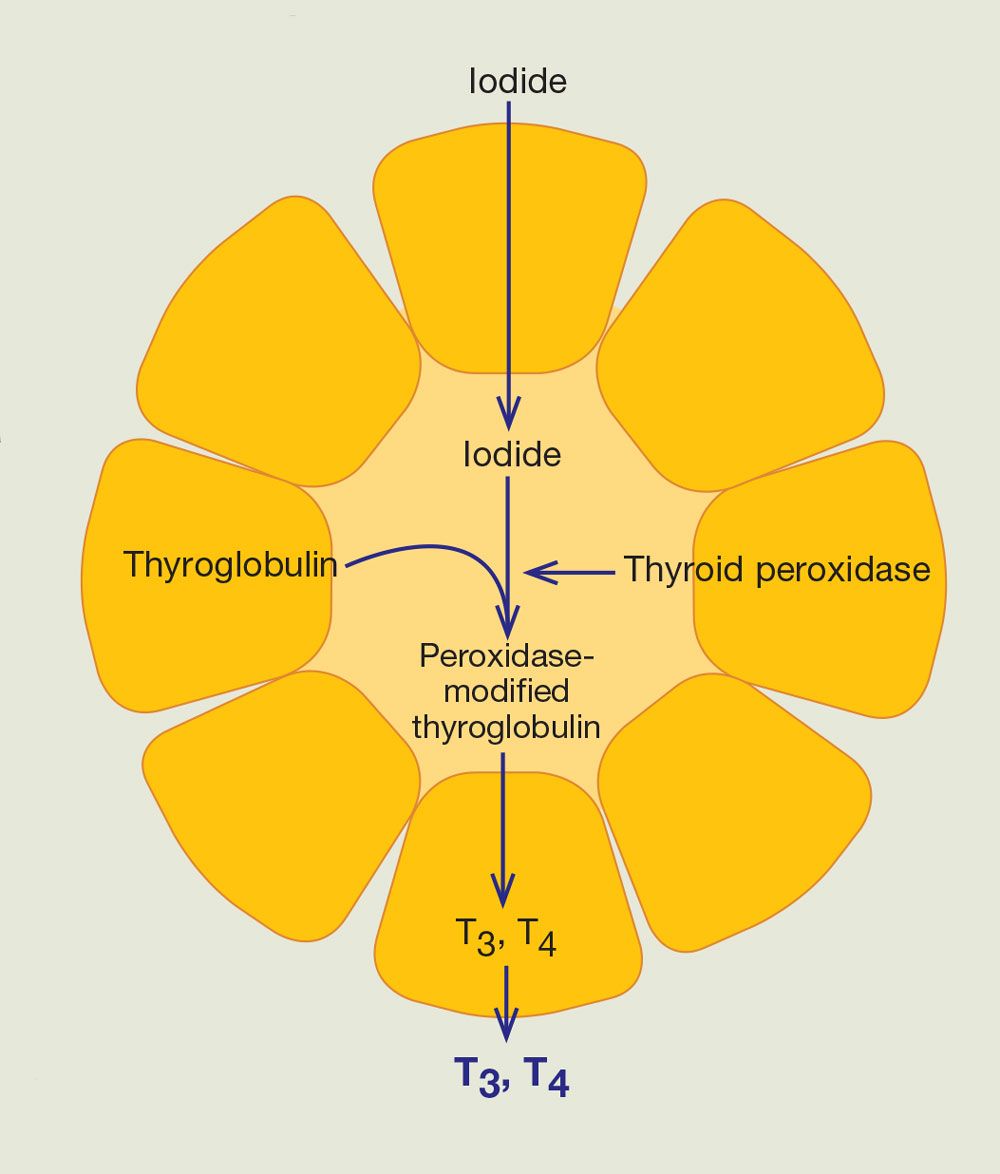 Tissue structure of the thyroid gland and hormone synthesis

Thyroid hormone as a tool for the management of mood has a long history. Formal research dates back at least to 1958.1 Many studies since then have shown the value of thyroid hormone augmentation in the treatment of MDD.

One of the most recent and well-known is the Sequenced Treatment Alternatives to Relieve Depression (STAR*D) study segment in which lithium and triiodothyronine (T3) were compared as add-on treatments for patients whose condition had not improved significantly with 2 previous antidepressants.2

T3 was equal in efficacy to lithium as augmentation, with better tolerability. More participants in the lithium group left treatment because of adverse effects (23.2% versus 9.6% of the T3 group). (Of course, it may not help tolerability to start with 450 mg of lithium and increase a week later to 900 mg.) By comparison, T3 was started at 25 Î¼g for a week and then increased to 50 Î¼g. Pre-treatment thyroid status was not used as a guide to dosing, nor was lithium level.

What does this tell us?

1. We see yet another confirmation that thyroid hormone has value as an augmentation agent.

2. We see that if you start patients at 450 mg of lithium, many will quit.

3. We see that lithium, too, has value as an augmentation agent-if managed in such a way that patients can stay on it.

By comparison, T4 as a mood treatment is a “known unknown”: some evidence of benefit is available, but confirmation and clarification await. It has been explored primarily in the treatment of bipolar depression, mostly in supraphysiologic doses,5 and in one randomized trial.6 The latter study, though heroic (it took years to mount and complete), was so small as to have some curious gender differences in placebo response that confused interpretation.7

A little-known study from years ago compared T4 as augmentation for non-responsive MDD with lithium (a sort of presaging of the much larger STAR*D comparison).8 In that study, every patient got both agents-but the order in which they were added varied. Patients who were augmented with T4first, before lithium, improved substantially more and faster than those who were augmented in the opposite order.

Also of note, by comparison with the STAR*D study: lithium was started at 384 mg (lithium sulfate form) and not increased until 2 weeks later, to twice the starting dose.8 Of 22 patients, none dropped out because of adverse effects, which suggests that either the patients or their treatment relationship was quite different from those in the STAR*D trial, or that lower starting doses are better tolerated.

To summarize this brief historical tour, if T4 has some role in mood disorders, several questions remain:

1 Is T4 at any dose truly effective as a mood treatment? (Likely but not established.)

2 What are the risks of T4 at supraphysiologic doses? (One reviewer finds them very low, especially by comparison with other routine treatments for bipolar depression; although not mainstream perspectives, the reviews are thorough.9,10) How about risks at physiologic levels, ie, with thyroid-stimulating hormone values still in the “normal” range? Is there any difference in these risks between T4 and T3?

A subset of the patients in the randomized trial of supraphysiologic T4 had cerebral glucose metabolism assessed before and after treatment.6 In confirmation of earlier work, investigators found strong correlations between mood improvement and metabolic changes in the anterior limbic network.12 This further establishes T4 as an important “known unknown.”

This article was originally posted on 10/14/2015 and has since been updated.

Dr Phelps is Director of the Mood Disorders Program at Samaritan Mental Health in Corvallis, Ore. He is the Bipolar Disorder Section Editor for Psychiatric Times. [full bio] He reports no conflicts of interest concerning the subject matter of this article.

3. Joffe RT, Singer W. A comparison of triiodothyronine and thyroxine in the potentiation of tricyclic antidepressants. Psychiatry Res. 1990;32:241-251.

10. Kelly T. A favorable risk-benefit analysis of high dose thyroid for treatment of bipolar disorders with regard to osteoporosis. J Affect Disord. 2014;166:353-358.

11. Kelly T, Lieberman DZ. The use of triiodothyronine as an augmentation agent in treatment-resistant bipolar II and bipolar disorder NOS. J Affect Disord. 2009;116:222-226.