Understanding Benzodiazepines and Their Role in Substance Use Disorders

Appropriate use of benzodiazepines in patients with a substance use disorder is an important skill. Here are some important considerations. 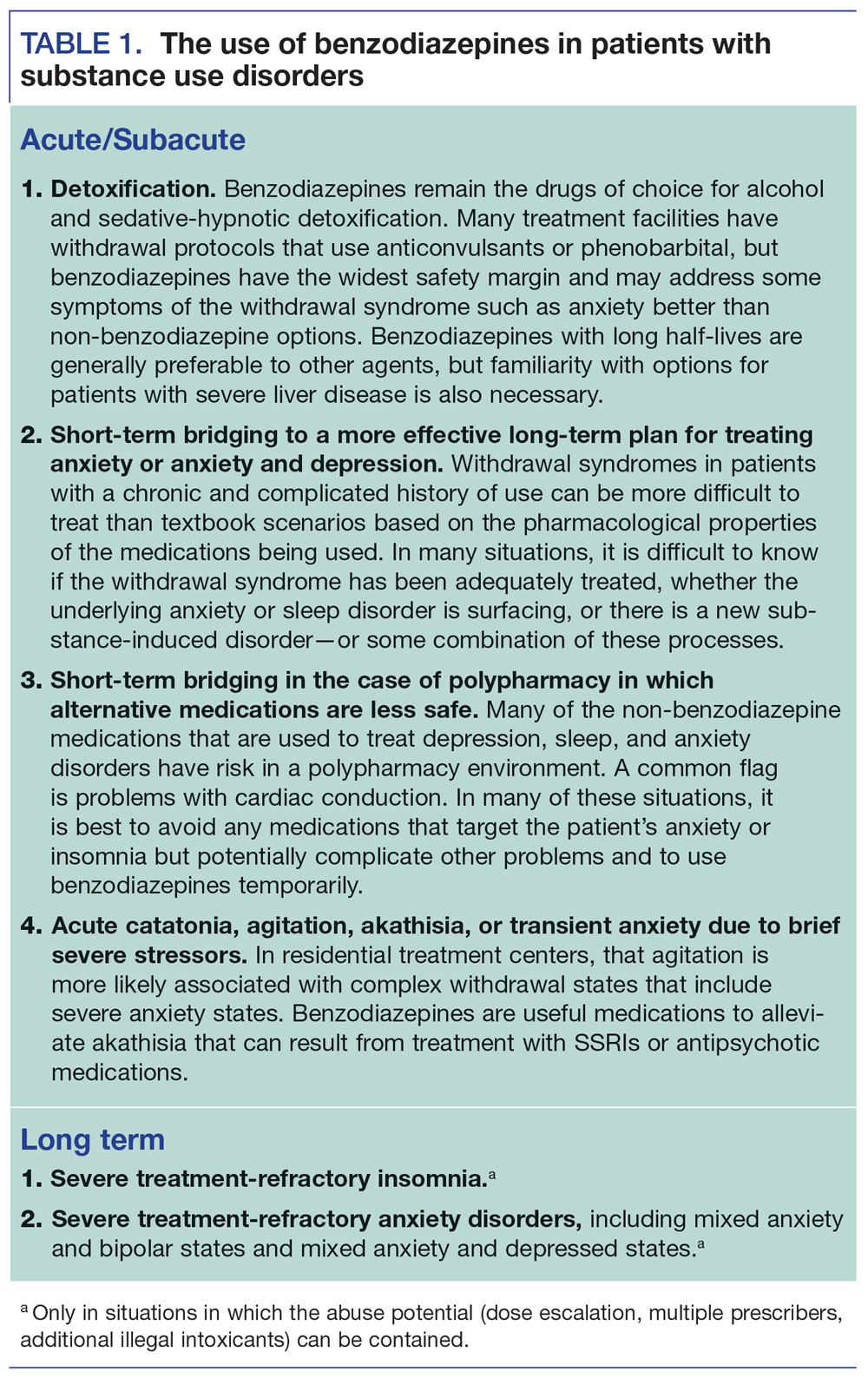 TABLE 1. The use of benzodiazepines in patients with substance use disorders 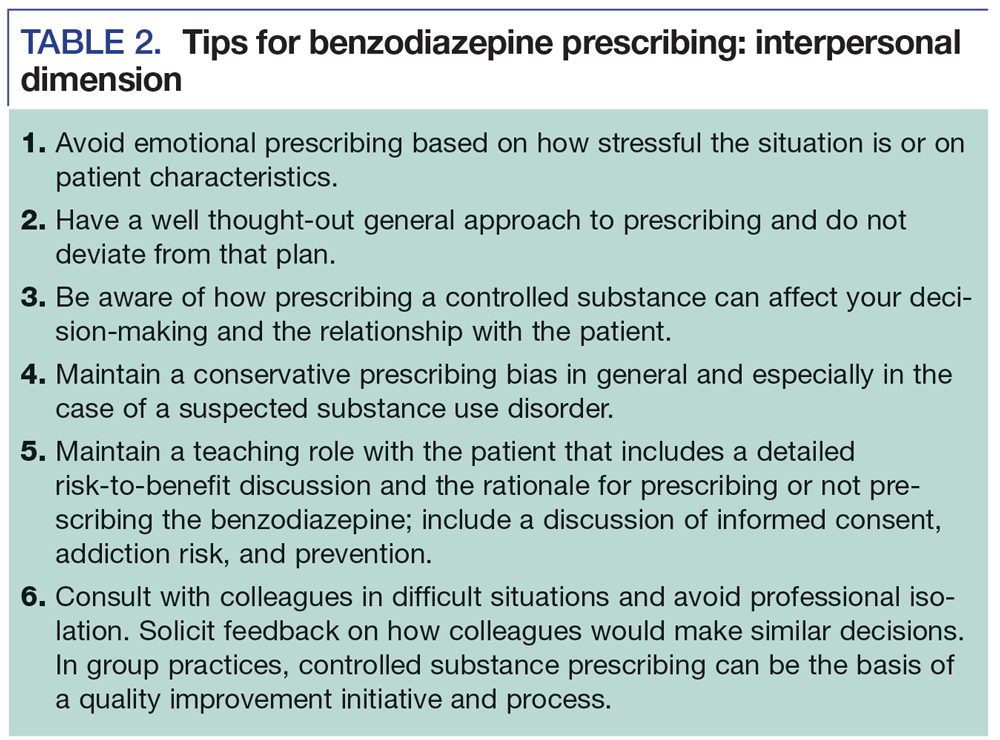 For the past 30 years, there have been widely discrepant views on the use of benzodiazepines that range from complete avoidance to use as moderate- to high-dose maintenance therapy for certain anxiety disorders. In the early 21st century, high-potency benzodiazepines were suggested as the preferred agents for treating anxiety and panic disorders because of their rapid onset of action and the fact that older low-potency benzodiazepines were considered ineffective for panic disorder. The adverse effects due to tolerance (rebound anxiety) and dependence were discussed as well as the direct effects on memory, and treatment guidelines for anxiety disorders recommended shorter periods of use.

Benzodiazepines are Schedule IV compounds, which means that as a group they have a low potential for abuse. Despite that assessment, alprazolam is the third most commonly diverted drug.

Survey estimates of the use and misuse of benzodiazepines do not give any measure of morbidity or mortality. However, a 6-year review of medication-related incidents in England and Wales indicates that benzodiazepines ranked sixth after opioids, antibiotics, warfarin, heparin, and insulin for severe harm or death.2 Between 2010 and 2014, 2 of the top 10 drugs implicated in overdoses were diazepam and alprazolam.3 In the deaths involving these medications, 95% included the use of concomitant drugs. Moreover, 30% of fatal opioid overdoses in the US involve benzodiazepines.4

Guidelines on benzodiazepine use have evolved over the years. Janicak and colleagues5 provide an algorithmic summary for anxiety disorders based on severity and chronicity. For the treatment of anxiety disorders, they reserve the use of benzodiazepines for inadequate response to behavior therapy, SSRIs plus behavior therapy, or TCAs and behavior therapy. At that point the initial recommendation is alprazolam/clonazepam. If initial treatment is at the severe level, they recommend alprazolam plus a TCA or an SSRI for the first month; if that is insufficient, “indefinite” alprazolam. There are additional therapies with or without benzodiazepines if that level of treatment is inadequate.

In the second edition of Principles and Practice of Psychopharmacology, Janicak and colleagues add clonazepam to the algorithm as another option for refractory anxiety. In subsequent editions, other antidepressants (venlafaxine, TCAs), alprazolam XR, SSRIs and SNRIs, and anticonvulsants (valproate, gabapentin) are all factored in at decision points. The basic position on benzodiazepines has been unaltered-limited use for the first month until the SSRI starts to work is preferred unless there is insufficient response, and in that case benzodiazepines are added at the level of various therapies as maintenance treatment for insufficient response.

Benzodiazepines can reinforce their own self-administration, which can occur in a number of ways. Some patients will notice either a euphorigenic or calming effect that is reinforcing. If the calming effect occurs in the case of social anxiety disorder, both the effect of the drug and the secondary effects of social affiliation will be reinforcing. In the case of patients with phobias, the medication can take on a magical talisman effect and a person may find it difficult to confront the feared situation. These are important but understudied aspects of the behavioral pharmacology of benzodiazepines.

Although most anxiety disorders are chronic, some subgroups of patients require pharmacotherapy for only short intervals after the initial diagnosis. There is no objective guidance on who should receive indefinite maintenance therapy, and the decision is complicated by several potential problems. Short-term tolerance and dose escalation can occur. Behavioral pharmacology issues can be part of the dose escalation and complicate a plan for stopping benzodiazepines at any point, and they complicate the use of other drugs, most notably opioids.

There are several patterns of benzodiazepine use in addictive disorders that explain why these drugs are frequently found as secondary medications. For example, sleep problems are frequent in moderate to heavy drinkers who take benzodiazepines and sleep medications to maintain sleep and treat early morning withdrawal symptoms.

Unprescribed benzodiazepines are taken to treat opioid withdrawal, but they can also be used to augment the euphorigenic effect of opioids. Moreover, they can be taken with a number of other agents to induce intoxication delirium. In cases such as these, it is important to assess the person for secondary use of benzodiazepines and discuss the high risk that is created.

Despite the long-term concerns and behavioral pharmacology-related concerns about benzodiazepines, they are indispensable in a number of situations. They are first-line medications for catatonia and greatly reduce the morbidity associated with that condition; they are used in inpatient settings for treating acute agitation associated with manic and psychotic states; and they are used for various forms of anesthesia.

Benzodiazepines are the preferred medications for detoxification from alcohol and sedative hypnotic drugs because of their wide safety margin in acute dosing. There is no doubt that in a supervised setting these medications can be the preferred agents for some conditions. As a quality concern in inpatients, duration of stay considerations play an important part in using benzodiazepines because the physician may find that the patient is being discharged before the drug can be tapered and discontinued. In that case, a plan needs to be developed if it is clear that the patient cannot take the medication in a controlled manner (Table 1).

These studies are generally based on cross-sectional survey data and have limitations in terms of data collection. The critical aspect of care is the ability to differentiate primary psychiatric disorders from intoxication, withdrawal, and induced states and whether treatment of clearly defined co-occurring disorders makes a difference in outcomes. In a review that looked at the treatment of co-occurring mood disorders and SUDs, Pettinati and colleagues8 conclude that while mood stabilization is possible, it does not lead to decreased substance use.

A typical flow diagram of how diagnosis might proceed in patients with co-occurring disorders is illustrated in the Figure. There is very little literature on treating the demarcated disorders, and in clinical practice intoxication, withdrawal, and substance-induced states may be difficult to determine in an outpatient setting. There are a number of problematic scenarios from a purely psychiatric perspective that are difficult to treat, such as severe anxiety and bipolar disorder, chronic refractory insomnia as a primary diagnosis before any psychiatric diagnosis was established, and anxiety and depression.

One of the main problems in using benzodiazepines is that there have been no advances in their evidence-based use in populations with SUD. After it was determined that there was an addiction risk and that more potent short-acting benzodiazepines presented a higher risk, there hasn’t been much new research. Although the American Psychiatric Association guideline cautions that its recommendations are more than 5 years old and cannot be considered to reflect “current knowledge and practice,” there has been minimal relevant research since then.

The British National Formulary provides basic guidance on the responsibilities of the prescriber of controlled substances.9 The 3 basic areas suggested include that the drug is given for a sound medical reason, that the dose is not escalated, and that the physician does not become an “unwitting source of supply for addicts.” A structured approach to prescribing benzodiazepines may be useful, but there is some evidence that there is a significant interpersonal component. A study of general practitioners found that they were overwhelmed by the psychosocial problems of their patients, and the prescriptions were driven by wanting to help the patient.10 Biases included the limited availability of psychological services, personal use of benzodiazepines for stress relief, the perception of benzodiazepines as benign, and the time constraint for counseling by the physician.

The decision to prescribe a benzodiazepine is more complex and demanding in the setting of an SUD. The patient may be seeing the physician to get a prescription primarily for intoxication purposes, to treat the effects of a primary addiction, or to potentiate the effects of another addictive drug. The decision is more complicated when the original prescription was made by a different physician and the patient is asking for a refill.

Patients-especially new patients-who request treatment with benzodiazepines need to be carefully assessed. The diagnosis and the rationale for treatment need to be clear. Reevaluation of the diagnosis and response to therapy over time is equally important. Consider urine toxicology to determine the presence of other drugs, particularly those that are often used with benzodiazepines (methadone, opioids, alcohol, stimulants). Urine toxicology can also confirm adherence rather than diversion.

Prescribing rules vary by state, and some states require checking the prescription drug monitoring program before any controlled substances are prescribed. If the patient is in a structured environment, know the procedures for monitoring and dispensing the medication. Have a clear plan and indication for the benzodiazepine, including a plan for discontinuation, and discuss it with the patient at the time of the initial prescribing decision.

A written document about the expectations of the patient may be a good idea as an anchor point in treatment. Although treatment contracts do not necessarily improve outcomes, written expectations, precautions, and what must be avoided are generally better than a rushed conversation about the same topics. The document can also be a reference point for future decisions.

Close monitoring is generally necessary with collateral contacts to ensure that the patient is doing well and is not experiencing complications from the benzodiazepine. An important consideration is the patient’s functional capacity on the medication. Dose escalation can be an early sign of a problem; thus, pill counts at each visit are recommended to determine the rate at which the patient is taking the medication. You may want to refer the patient for non-pharmacological approaches to problems such as insomnia (referral to cognitive behavioral therapy for sleep) and chronic pain (pain specialist or physical therapy referrals). For additional tips on how to safely prescribe benzodiazepines, see Table 2.