Of the 3.6 million military personnel deployed to Operation Iraqi Freedom and Operation Enduring Freedom, over half are married and about 53% are parents. As these veterans return home, the process of reintegration can have a variety of effects. 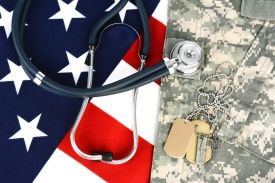 Of the 3.6 million military personnel deployed to Operation Iraqi Freedom (OIF) and Operation Enduring Freedom (OEF), over half are married and about 53% are parents. This has resulted in the separation of about 2 million children from a military parent. Veterans of these conflicts present with higher levels of mental illness compared with veterans of other service eras.

As OIF/OEF veterans return home, the process of reintegration can have a variety of effects on spouses or partners and children. Behavioral health care professionals may increasingly encounter OIF/OEF veterans and their families in a variety of treatment environments, including private practice, school social work, hospitals, and community treatment centers.

Mental health problems, such as PTSD, are common in veterans who return from Iraq and Afghanistan. PTSD has been linked to a myriad of difficulties for both the veteran parent and his or her spouse/partner and children. OIF/OEF veterans with PTSD are more likely to have difficulty with parenting and maintaining employment and may experience strain within their family and marital relationships.

Veteran parents with PTSD also exhibit poorer parenting skills and communication difficulties with non-deployed spouses compared with veterans who do not have PTSD-even 1 year after reuniting with their families, according to a study of National Guard military personnel deployed to Iraq.2 Veterans with children tend to report feelings of anger and more symptoms of depression and to endorse interpersonal violence and lower satisfaction with relationships compared with veterans who do not have children.

Common challenges specific to reintegrating into family life include regret at missing key moments in a child’s life, difficulty in reconnecting with a child, self-identified need for help in anger management and emotional expression, and adjustment to co-parenting. In addition, veterans whose children have mental health problems tend to have high rates of depression, anxiety, and other mental health symptoms and lower satisfaction with social relationships and with family.

Spouses/partners
Common challenges experienced by spouses and partners of OIF/OEF veterans include mental illness, interpersonal violence, and difficulties in readjusting to new roles within the family. Depression and anxiety both during and after deployment are common among spouses and partners, and these disorders may worsen if the veteran spouse has a physical injury resulting from combat.

Another study found that veterans with PTSD were less likely to report intimate partner aggression (IPA) compared with their partners and that IPA was more commonly perpetrated by the female partners than by the male veterans.4 The spouse of a veteran with PTSD may face challenges, including financial hardship, gambling, problems requesting leave from an employer to care for a spouse with PTSD, and time spent taking the spouse to medical appointments and talking to health care professionals.

Some research suggests that the marital satisfaction of military couples is not different from that of non-military families with the exception of when the deployed spouse has PTSD. In this case, both military members and their spouses report lower marital satisfaction, especially in terms of poor parenting alliance and negative communication.

Children
Parental deployment can affect the mental health and behavior of children. Studies indicate that children with a deployed OIF/OEF parent have high rates of depressive disorder and acute stress reactions.5 Emotional difficulties may increase if the veteran parent has PTSD.

Children ages 3 to 5 present with high levels of externalizing and internalizing behavior. Teenagers with a deployed parent, especially those who are raised by a nonparent during the deployment, exhibit higher rates of substance abuse and binge drinking compared with teenagers who do not have parents in the military. Children who take on parenting roles during a parent’s deployment may miss out on age-appropriate activities, including spending time with peers, which in turn can interfere with age-appropriate development.

Recommendations
Behavioral health care professionals can improve their services for military families by educating themselves about military culture and the unique challenges faced by families of veterans and by asking about military service during intake. These steps may help build rapport with clients and improve diagnosis, treatment plans, and outcomes.

It may also be beneficial to educate veterans about what responses to separation and reunion are age typical in children and about the risk of interpersonal violence between returned veterans and their spouses/partners, particularly if the veteran has PTSD. Building professional relationships with the Department of Veterans Affairs and the Department of Defense can help behavioral health care professionals effectively connect military families with these agencies.

Department of Defense online course about effects of deployment on children and families: http://www.deploymentpsych.org

Ms Pajak is a Licensed Medical Social Worker and Certified Correctional Health Professional. She graduated from The Georgia Institute of Technology and The University of Georgia. She works at a county jail in Atlanta, Georgia, as a mental health clinician.