Wrestling with Religion and Spirituality

We humans need to believe. We tend to feel better, more grounded, and safer. 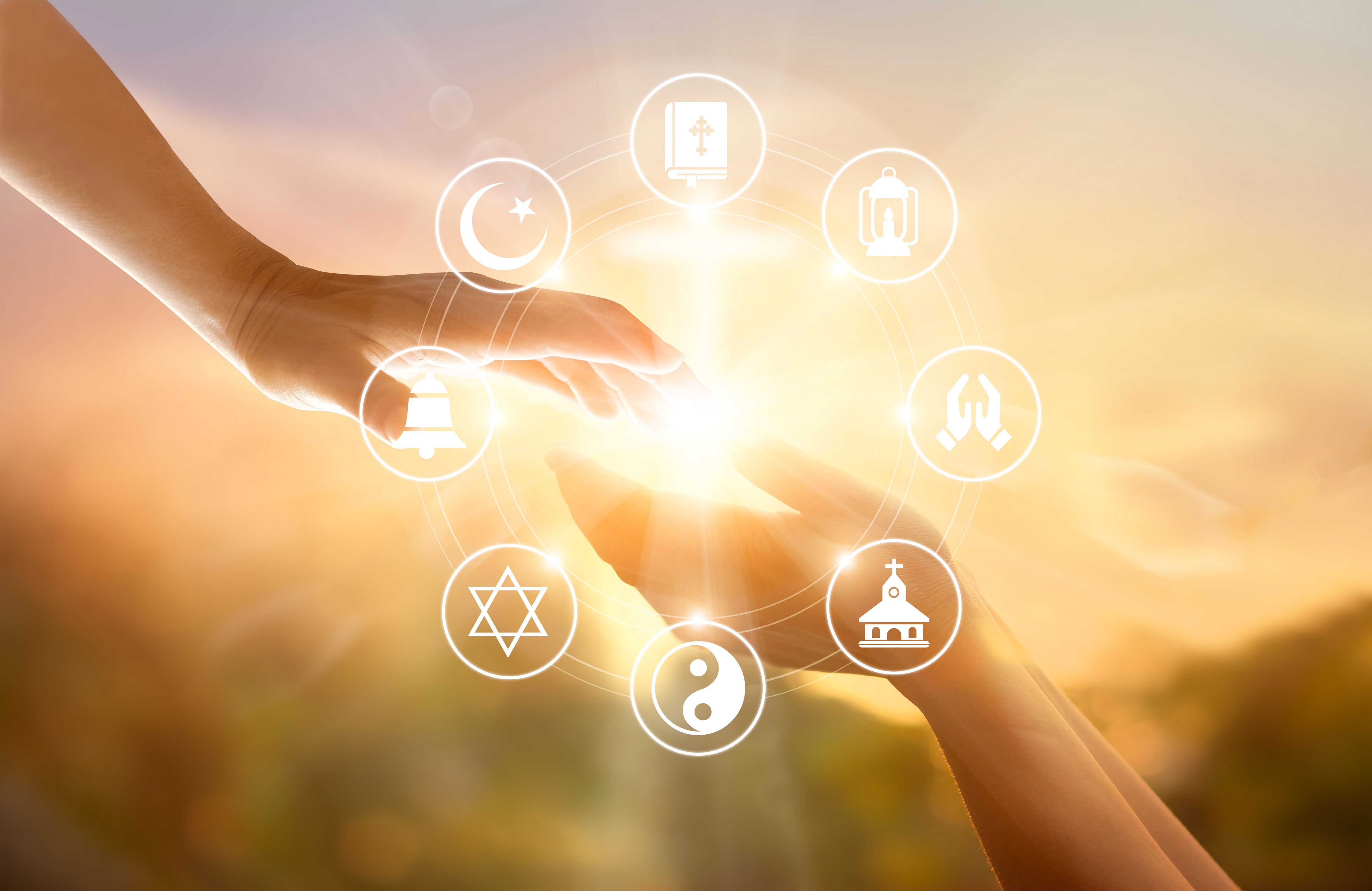 Dr Levineis Professor Emeritus in Psychiatry, University of California at San Diego. He reports no conflicts of interest concerning the subject matter of this article.

As a practicing psychiatrist, I am often confronted by examples of life’s dramatic affect-laden situations and moods, ranging from loss and tragedy to love and exultation. Whether in despair or celebration, patients (and their psychiatrists) often turn to, or spurn, the existence of God.

I am not religious, at least in the traditional sense of the word. I say this with neither pride nor apology, but with utmost respect for those who do believe in God. When asked whether I am a believer, I parry-with seriousness-by saying, “It depends . . .”

I am proudly Jewish: I was raised and schooled in Jewish history, culture, and traditions and can speak, read, and write in Yiddish and Hebrew. I worked for a year in Israel; was a member of a Zionist youth group; and enjoy our religious holidays, rituals, and music.

Although my immigrant parents were staunch Jews, they did not believe in an omnipotent, omniscient God. My late father’s rationale (my mother agreed) for being an atheist was profoundly simple: The benevolent God he’d been taught to revere as a child in a Lithuanian shtetl had utterly failed him. His family was for years engulfed by hateful anti-Semitic harassment, pillaging, and pogroms.

The description of myself as agnostic seemed equivocating, perhaps dissembling.

Those seminal experiences were soon followed by the onslaughts of the Nazis and their acolytes and the decimation of members of his family, among millions of others. My dad was always grateful for escaping the Holocaust, but he would say, “A righteous God would never allow such atrocities against humanity.” This line of thinking has often been invoked (and debated) since the time of Job or earlier when tragedies occurred.

My atheist parents nonetheless encouraged a broad education on many subjects, including religious thinking, rituals, and values.

Although I wasn’t a firm “believer” in God, I couldn’t call myself an atheist, which somehow seemed too “defiant” and definite. Nor could I comfortably say I was purely secular, which felt simplistic. The description of myself as agnostic seemed equivocating, perhaps dissembling.

Like you, I’ve gone through some painful crises during my lifetime. On rare occasions when the emotional or physical suffering of myself or others close to me seemed beyond resolution, I tried praying to “someone, some entity, somewhere, somehow.” Was I merely enacting the World War I maxim, “There are no atheists in foxholes”? I occasionally “speak” with my deceased parents: Are their spirits still here? I sometimes use the words “karma” and “fate” as if they were certainties. What is that all about?

My dad was always grateful for escaping the Holocaust, but he would say, “A righteous God would never allow such atrocities against humanity."

Aside from these “lapses” (some might say “breakthroughs”), I maintained my ambiguous relationship with the existence of God.

I have since learned a few salutary things:

Believing: Years of studying and working with people in all walks of life and different religions, races, and ethnicities have taught me that “Believing” is one of the fundamental Four B’s of humanity’s quest for a meaningful existence (in addition to Being, Belonging, and Benevolence). Those who have faith in an all-knowing, all-embracing God are seemingly more resilient during life’s adversities.

Places of worship: When I visited synagogues, temples, churches, ashrams, monasteries, and mosques in my studies, I was struck by common atmospheres that fostered spiritual reverence and contemplation, as well as communal traditions and music.

Our beloved planet Earth is an infinitesimal body barely seen on maps of space, and we inhabitants are as minute subatomic particles.

Spirituality: I have personally had surreal experiences that seemed transcendental or spiritual, as if “transported” to “other-worldly” states, wherein I felt “awakened” by wonder and awe, yet serenely peaceful. These were prompted by evocative music, night sky in the desert or at sea, mountaintops and sunsets, silent chapels, artistic creations, and feelings of love or ecstasy.

Images: Two sets of dramatic photos have moved me: (1) subatomic particles of cells in the human body and nature, taken through electron microscope lenses; and (2) stars, nebulae, and galaxies millions of light-years away, shot by the Hubble or other telescopic cameras. Both sets reveal remarkable colors and structures that are somehow familiar yet unfathomable . . . and awesome.

Infinite and infinitesimal: The latest findings indicate there are multiple vast universes beyond our own modest universe, all filled with mega and tiny stars, constellations, and black holes. Our beloved planet Earth is an infinitesimal body barely seen on maps of space, and we inhabitants are as minute subatomic particles.

Origins: We organic beings are made up of similar primordial materials found throughout our solar systems, views expressed by many brilliant astrophysicists and religious philosophers. Some are believers, others not, but the consensus is that there are dimensions of life and existence that we do not yet grasp.

I respectfully share my own thoughts about my relationship with spirituality, with which some of you will no doubt differ, but perhaps you are also examining your own religious connections and beliefs.

•·I am committed to and proud of my Jewish heritage, identity, and culture.

•·We humans need to believe. We tend to feel better, more grounded, and safer, and our lives are more meaningful when we have an intense belief system, like God, or a system of overriding values or ethics.

•·The existence of a unitary holy being who in his or her infinite wisdom created us in his or her image and will care for us forever is beyond my personal credence and confidence.

•·I understand and respect those who believe deeply in God and even envy them for their sense of security in deep worship.

We humans need to believe. We tend to feel better, more grounded, and safer. . .

•·One can be spiritual and not religious. There is a spiritual dimension to human existence, our “soul,” if you will, which we can occasionally sense or “connect with.” There are metaphysical forces that we do not, perhaps cannot, and perhaps shall not completely understand.

•·The earliest origins of both our galaxies and universes and our own human bodies are made up of similar elemental primordia. (“We are the world,” so to speak).

•·Darwin’s theory of evolution has been scientifically validated, as opposed to the wonderful traditional stories and parables found in religious holy books.

•·Great harm has been inflicted through the centuries and now by religious zealots who hate and perpetrate violence based on their fundamentalist interpretations of these writings.

•·There is immense wisdom in the moral teachings and tenets of the holy books, whose sage writers invariably emphasized benevolence, morality, and justice, which have enriched and ennobled our species.

• If we lived up to these benevolent principles, or the best tendencies of humanity (as opposed to our worst tendencies), we could imprint a “positive emotional footprint” on this world.

In sum, I believe in an unknown, perhaps unknowable, spiritual or transcendental dimension in our existence. In the spirit of countless secular songs and religious prayers, I say, “Hallelujah!”