The Age of Cannabis Has Arrived: Issues for Older Adults

Cannabis use has prompted symptoms such as dizziness, sleepiness, and fatigue in older patients. Are there any benevolent effects?

A new question must be added to the list that mental health clinicians ask their older patients while taking a history, regardless of age: “Have you used any cannabis products recently?”

I learned this lesson during a follow-up appointment with an 82-year-old man with Alzheimer disease. He reported some rather abrupt cognitive decline, and I asked him and his wife about recent medical changes without finding any clear precipitant. Finally, his wife sheepishly confessed that their son had sent them a grab bag of cannabis-derived products that the patient was taking. The family was desperate for anything to help his cognitive decline and they had heard that cannabis was a miracle cure for Alzheimer disease and many other conditions. Unfortunately, the patient received no benefit but did experience some mild, noticeable adverse effects. Without my probing, I never would have known. The next patient I asked explicitly about using cannabis products responded in an equally explicit manner: “No I haven’t,” he said, “but can you get me some?” It was clear that the age of cannabis had arrived.

ALSO IN THIS SPECIAL REPORT 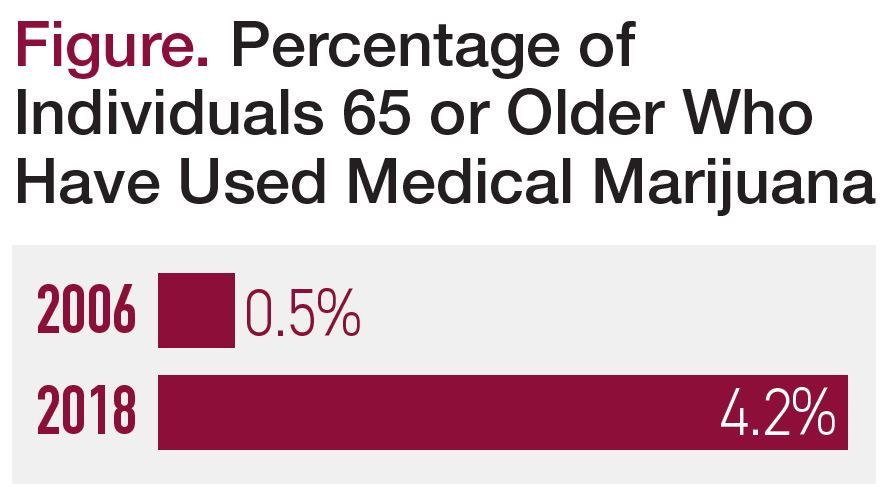 Figure. Percentage of Individuals 65 or Older Who Have Used Medical Marijuana

Older individuals with psychiatric disorders are increasingly using cannabis, largely in the form of prescribed medical marijuana and cannabidiol (CBD). This trend has been driven by several factors: reduced stigma, lifted restrictions on possession and sale by most states, and the enormous proliferation of articles and ads that tout supposed benefits of cannabis for many conditions that afflict the elderly, including chronic pain, peripheral neuropathy, stress, anxiety, depression, insomnia, headaches, and the adverse effects of chemotherapy.1,2 As a result, medical marijuana use by individuals 65 or older has increased more than 8-fold in recent years, from less than 0.5% in 2006 to 4.2% in 20183 (Figure). In a survey of 345 adults in Colorado, 16% had used medical marijuana since legalization, with half the users being 75 or older.4 CBD has seen a particularly enormous surge in interest and availability after it was exempted from federal regulations in the 2018 US Farm Bill. Since then, it is estimated that 6.4% of adults aged 45 to 55 and 3.7% of those 55 or older have used CBD at least once.5

Cannabis, Cognition, and Quality of Life

Although the cannabis sativa plant contains hundreds of chemicals known as cannabinoids, the 2 main active chemicals are Δ-٩-tetrahydrocannabinol (THC) and CBD. THC has both psychotropic and euphoric properties and confers the high associated with marijuana, while CBD is noneuphoric because it does not activate the cannabinoid 1 receptor like THC does. The same plants that produce THC also produce CBD. Both THC and CBD come in a variety of forms; they can be smoked, vaped, eaten, ingested as liquids, used as oils, and applied via creams and cosmetics.

The psychotropic effects of both THC and CBD are mainly because of their interaction with endogenous cannabinoid receptors in the brain, as well as activation of a variety of other cannabinoid and noncannabinoid receptors (ie, serotonergic, glutaminergic, µ-opioid, and α1-adrenergic) in the central nervous system and on immunologic cells. Based on their known and theorized properties, marijuana and CBD have been proposed as remedies to modulate symptoms of stress, insomnia, pain, inflammation, and cognitive impairment, particularly in older individuals. As a result, there are many unsubstantiated claims that THC and/or CBD can treat Alzheimer disease, Parkinson disease, schizophrenia, and anxiety and mood disorders.6

Several small case series have suggested a tentative basis for some of these claims. For example, a study looked at the use of an oral spray containing THC and CBD for peripheral nerve pain and found that it was well tolerated and showed a trend toward improvement in pain and sleep.7 Medical marijuana use has been associated with some improvement in both movements and neuropsychiatric symptoms in individuals with Parkinson disease.6 One small case series found improvement in behavioral and psychological symptoms of dementia from cannabis oil containing THC.8 A related randomized control trial of 50 individuals with dementia and associated neuropsychiatric symptoms did not see any benefit from THC, but did find it was well tolerated and with no appreciable effect on memory.9 Despite these limited data, agitation associated with dementia is a qualifying condition for medical marijuana in several states.10

Gruber and colleagues studied a sample of middle-aged individuals using medical marijuana over 3 months and found improvements in executive function and reductions in depression, insomnia, and impulsivity.1,11 They also saw a reduction in the use of benzodiazepines and opioids as well as a normalization of brain activation waves to states seen in normal controls. It is not clear, however, if these neurocognitive results were the direct result of the medical marijuana or an indirect benefit of decreases in pain, anxiety, and insomnia.

Although there are many other in vivo, in vitro, and animal studies of THC and CBD, it is clear that evidence is limited, and there are few randomized controlled trials to support most of their theorized clinical benefits. In addition, these studies are based on a variety of cannabis products from multiple sources and with variable contents.12 The 2 exceptions include a Food and Drug Administration (FDA)-approved form of synthetic THC known as dronabinol, which is used for treating appetite and weight loss resulting from AIDS as well as nausea and vomiting from chemotherapy, and a medication containing CBD for the treatment of 2 rare childhood seizure disorders. Dronabinol has also been studied in Alzheimer disease to treat anorexia and agitation and was found to be well tolerated with variable efficacy for both conditions.13 In the European Union, nabiximols, a CBD-THC combination, has been approved for the treatment of muscle spasms associated with multiple sclerosis.

The Downside of Cannabis Use

The use of medical marijuana and CBD in older adults must be approached with caution because there are several potential adverse effects. It has been well established that heavy marijuana use in both young and middle-aged adults can cause mild functional and structural brain impairments affecting attention, processing speed, motor coordination, verbal memory, and executive function.14,15 Although these effects may be more variable with lighter use in older adults, they may be amplified by preexisting brain impairment as well as by underlying pulmonary and cardiovascular conditions, especially when medical marijuana is smoked or vaped.16 One review of 184 older patients (median age, 82) who were on medical marijuana for 6 months found that approximately 80% reported some benefit for the treated symptoms, but one-third reported adverse effects, including dizziness (12%) and sleepiness and fatigue (11.2%).17 Other reported adverse effects from a national epidemiologic survey included changes in mood and cognition, psychosis, increased heart rate and blood pressure, urinary retention, and blurred vision.18 In addition, THC has been associated with impaired driving in young adults, which could also be a problem in older drivers who may be impaired at baseline.19

A meta-analysis of CBD use found that it is generally well tolerated with few adverse effects, the most common one being diarrhea.20 Other adverse effects associated with CBD include nausea, drowsiness, fatigue, dry mouth, and mood changes. Keep in mind that CBD is an inhibitor of several cytochrome P450 enzymes, including CYP1A2, CYP2B6, CYP2C9, CYP2D6, and CYP3A4. CBD can lead to drug-drug interactions with several commonly used medication groups in older patients, including blood thinners, antibiotics, anticonvulsants, antidepressants, and antipsychotics.

What To Ask Patients, and What To Tell Them

In this new era of medical marijuana and CBD, there are several important takeaways for clinicians working with older patients. Do not assume that because a patient is elderly and has physical or cognitive limitations that they do not fit the profile of a cannabis user. To the contrary: Every older patient along with their caregivers should be queried as to their use of cannabis, whether recreationally, from mail order or friends and family, or through a prescription. To this end, every clinical history should include questions about the use of cannabis products, including the stated reasons for use, the type of marijuana or CBD being used, and observed benefits and adverse effects. Concomitant medical conditions must be reviewed for potential vulnerabilities, such as an individual with hypertension using a product that increases blood pressure or heart rate, or an individual with chronic obstructive pulmonary disease using vaping oils. Potential drug-drug interactions also need to be considered, with a focus on the categories of medications discussed in the article.

Patients and their caregivers need to understand that nearly all benefit claims are largely unsubstantiated, as they lack a rigorous scientific basis. Slick articles and ads generally exaggerate potential benefits, or they refer to in vitro or animal studies and anecdotal reports, making them sound as if they constitute direct evidence of clinical effects. They also need to understand the differences between THC and CBD, along with the fact that production is largely unregulated, so products can have many different ingredients and properties. Several studies have found wide discrepancies between labels for cannabis products and their actual contents, especially when it comes to the amount of THC or CBD.5 Thus, many products that claim only to have CBD actually have varying degrees of THC present. This lack of consistency often accounts for both inconsistent clinical effects as well as adverse effect issues, and these factors lead many older adults to discontinue use of cannabis products.

Finally, keep in mind that older patients with preexisting neurocognitive impairment such as in Alzheimer disease might be particularly vulnerable to adverse effects such as drowsiness, dizziness, fatigue, and mood changes, which in turn can account for significant and unpredictable fluctuations in cognition and behavior. Such unpredictability (in the amount of drug being ingested over time and the ensuing effects on brain and body) is exactly the sort of variability that can be hazardous in the older patient. Compounding these risks is the fact that many individuals will use products such as CBD oil without the knowledge and supervision of a knowledgeable clinician.

The bottom line is that more rigorous scientific study using randomized controlled trials is needed to substantiate the proposed benefits of cannabis and more fully understand the range and impact of common adverse effects.