Take a look at this bread-and-butter case of ADHD from a child psychiatry clinic.

In this installment of Tales From the Clinic: The Art of Psychiatry, we look at a bread-and-butter case of attention-deficit/hyperactivity disorder (ADHD) from a child psychiatry clinic. Although very common, this disorder is surrounded by multiple questions that research is just beginning to unravel. It is subject to gender-norming and differential referral and diagnosis rates in females versus males, and even though it is highly heritable, ADHD is still labeled as “bad behavior” in many families. Resistance to initiating psychotropic ADHD medications is prevalent despite extensive proof that treatment can successfully alter a child’s life trajectory in terms of academic achievements, interpersonal relationships, substance use, and criminal history.

“Sophie” was an 8-year-old girl with no known psychiatric history who presented to the clinic for initial psychiatric evaluation accompanied by her mother, who had concerns about Sophie’s academic performance and behavior at school. Her mother related that Sophie had always been an active child, but there were no concerns until she entered preschool. Since then, teachers had expressed growing concern regarding Sophie’s behavior in the classroom. Teachers previously had recommended seeking psychiatric evaluation for possible ADHD, but her mother declined. The school provided accommodations under the 504 Plan, but Sophie continued to have a difficult time. Her current teacher reported that Sophie had significant difficulty sustaining attention and needed frequent redirection because of her off-task and disruptive behavior. In addition, the teacher recently notified Sophie’s mother that Sophie was not performing at grade level and was at risk of repeating the grade. Consequently, Sophie’s mother decided to seek psychiatric evaluation.

On exam, Sophie was a well-nourished child without evidence of developmental delays. She discussed having trouble making friends at school because kids thought she was “weird.” She explained that she was easily distracted and found it difficult to stay in her seat during class, and that teachers often redirected her because she talked out of turn or loudly. She went on to discuss that she felt nervous at school sometimes because she worried about making mistakes and being ridiculed by classmates. She denied having other anxiety symptoms and described having euthymic mood except for occasionally feeling sad and lonely at school because she did not have any close friends. Psychiatric review of symptoms was otherwise negative. Sophie’s medical history was unremarkable. Regarding family history, it too was negative for medical or psychiatric illness except for father and paternal cousins with history of ADHD.

Collateral information was obtained by speaking to teachers and reviewing ADHD rating scales. History obtained from Sophie, her parents, and the teachers was indicative of ADHD combined type. Although teachers also reported that Sophie was not performing at grade level, they stated that she did very well when given 1-to-1 instruction and additional time to complete tasks.

After discussing treatment options, Sophie’s mother gave consent to begin a trial of methylphenidate hydrochloride ER. Sophie tolerated the 18-mg dose but remained symptomatic. The dose was gradually increased to 36 mg every morning, which controlled ADHD symptoms adequately in the morning, but she still needed redirection for off-task behavior in the afternoon. Methylphenidate immediate-release 5 mg was added at noon, and teachers reported resolution of ADHD symptoms in the afternoon. Sophie’s academic performance improved, and she was now receiving A’s and B’s. However, her mother was concerned that Sophie had suppressed appetite during the day. Her mother was advised to give medication only on school days and to provide calorically dense meals and snacks to prevent weight loss. The patient’s weight remained stable and within normal range, so her mother decided to continue the medication regimen. 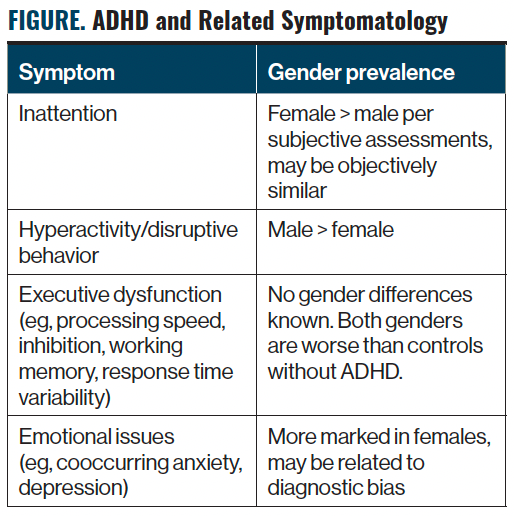 ADHD is a “persistent pattern of inattention and/or hyperactivity-impulsivity that interferes with functioning or development.”1 It is subclassified into 3 types: combined presentation, predominantly inattentive presentation, and predominantly hyperactive presentation. ADHD is one of the most common neurodevelopmental disorders of childhood, with a prevalence of over 5%.2 ADHD is highly heritable (80%),3,4 and males are more likely to receive a diagnosis of ADHD. The gender difference is presumably due to higher incidence of impulsive and disruptive behavior in boys, which leads to more frequent referrals.5 Girls with ADHD, on the other hand, are more frequently described as inattentive (Figure). Reasons for misdiagnosis or underdiagnosis link to referral and diagnostic bias, but parents also often tend to rate ADHD symptoms as milder in girls unless accompanied by associated emotional dysregulation (eg, anxiety).5

Although the exact cause of ADHD has yet to be identified, it has been associated with multiple neurophysiological deficits. Theoretical approaches integrate clinical symptoms and neuropsychological difficulties within a framework of certain brain dysfunctions. Cognitive deficits may surface from dysfunctions particularly in fronto-striatal or meso-cortical brain networks, whereas problems with reward processing may be linked with dysfunctions in the mesolimbic dopaminergic system.6 Notwithstanding, deficits in ADHD may already be seen in the resting brain, and a more fundamental neuronal network approach suggests that in individuals with ADHD, default-mode-network activity in particular may interfere with activity in neuronal networks engaged in task processing, resulting in difficulties in state regulation and periodic attention lapses.6 Heritability of different aspects of cognitive and executive dysfunction varies from 10% to 88% in twin studies.7

ADHD is a clinical diagnosis, meaning there are no standard laboratory or imaging studies in ADHD.8 Evaluation for ADHD should consist of clinical interviews with the parent and patient; obtaining information about the patient’s school or day care functioning; evaluation for comorbid psychiatric disorders; and review of the patient’s medical, social, and family histories. The most common comorbidities include oppositional defiant disorder (ODD), conduct disorder, anxiety, depressive disorders, and learning or language disorders. It has been found that individuals with ADHD have a higher incidence of academic problems, substance use disorders, relational problems, and criminal activity.9 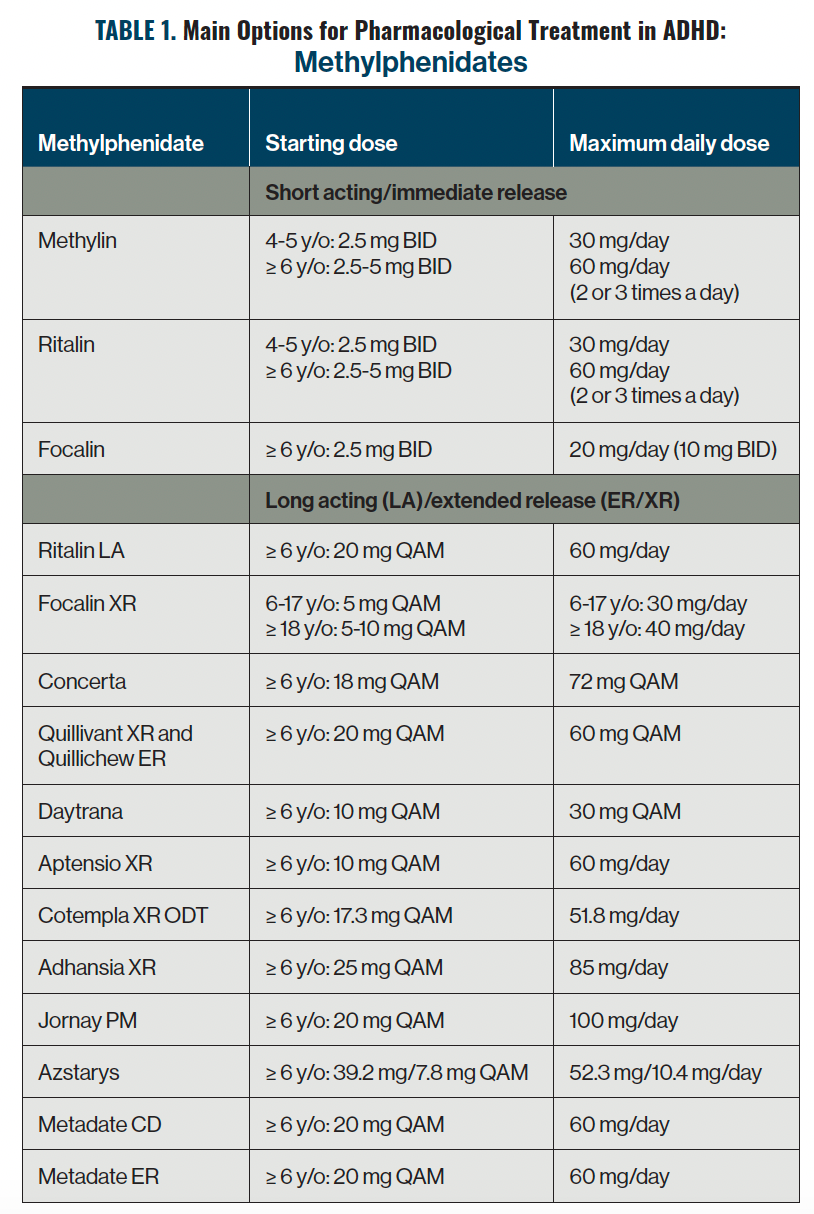 Fortunately, treatment for individuals with ADHD is tremendously effective. Stimulant treatment is one of the best-studied interventions in child psychiatry, and the response rate can be as high as 90%. Stimulants are classified in 2 categories: amphetamines and methylphenidates (Tables 1 and 2). Amphetamines stimulate release of dopamine and, to a lesser extent, norepinephrine from presynaptic sites and inhibit dopamine reuptake. Methylphenidate blocks dopamine and norepinephrine transporters in the presynaptic neuron, thereby inhibiting reuptake and resulting in increased concentrations of these neurotransmitters. Other medication options include α agonists (ie, clonidine and guanfacine) and atomoxetine (Strattera) (Table 3). However, these are not as effective as stimulants. For instance, the response rate for atomoxetine is 60%. Clonidine and guanfacine have an agonist effect of pre- and postsynaptic α2 receptors, which are believed to play a role in attentional and organizational functions in the prefrontal cortex. Atomoxetine inhibits norepinephrine reuptake.10 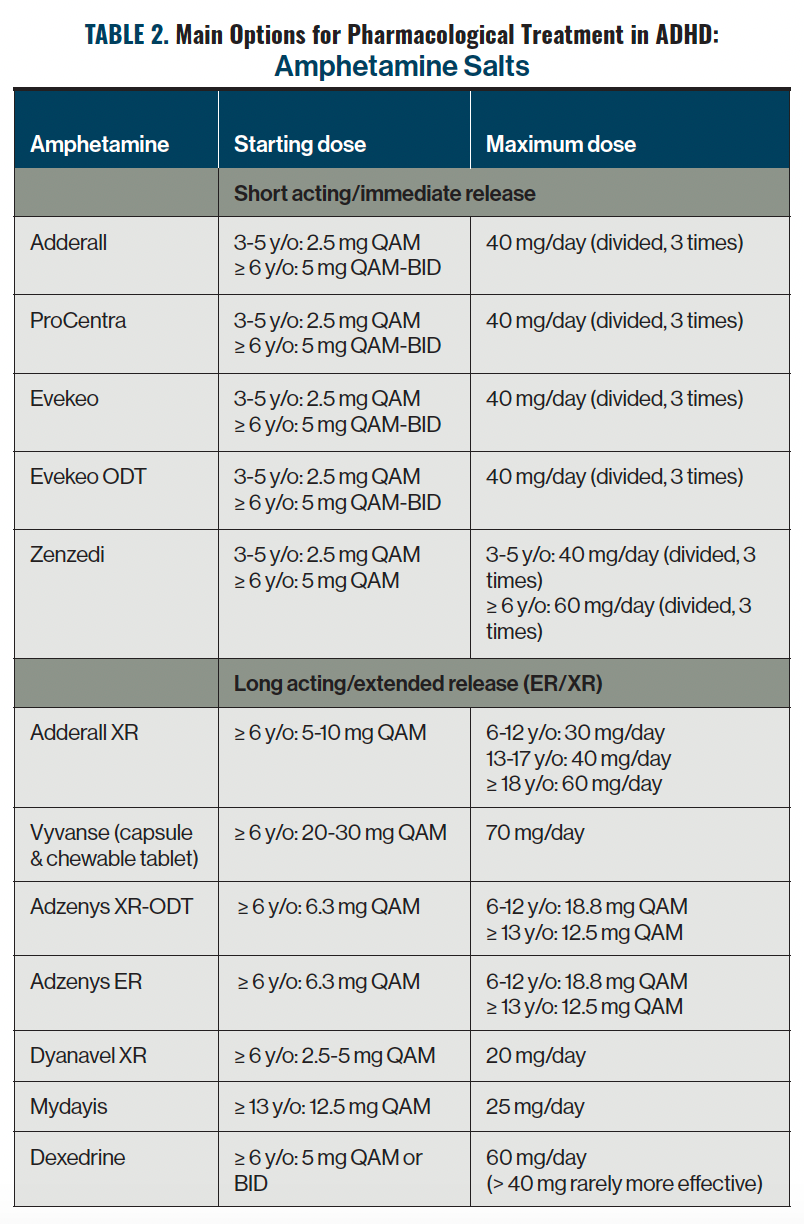 Time needed to reach a therapeutic dose of medication can be affected by multiple factors such as adverse effects, difficulty obtaining collateral information from teachers to assess response to medication, and nonadherence to medication or inconsistent attendance to return appointments. However, if medication is tolerated and the patient remains symptomatic, the stimulant dose can be adjusted every 7 days. Generally speaking, dose increases should be conservative. For example, if the patient was taking methylphenidate 27 mg every morning, it would be increased to 36 mg. In my experience, in patients with mild to moderate ADHD with no comorbidities and consistent adherence to treatment, adequate symptom control can be achieved in a few visits. Nonetheless, if the patient is seen more frequently (every 1 to 2 weeks as opposed to monthly), perhaps symptoms can be controlled in 1 to 2 months. 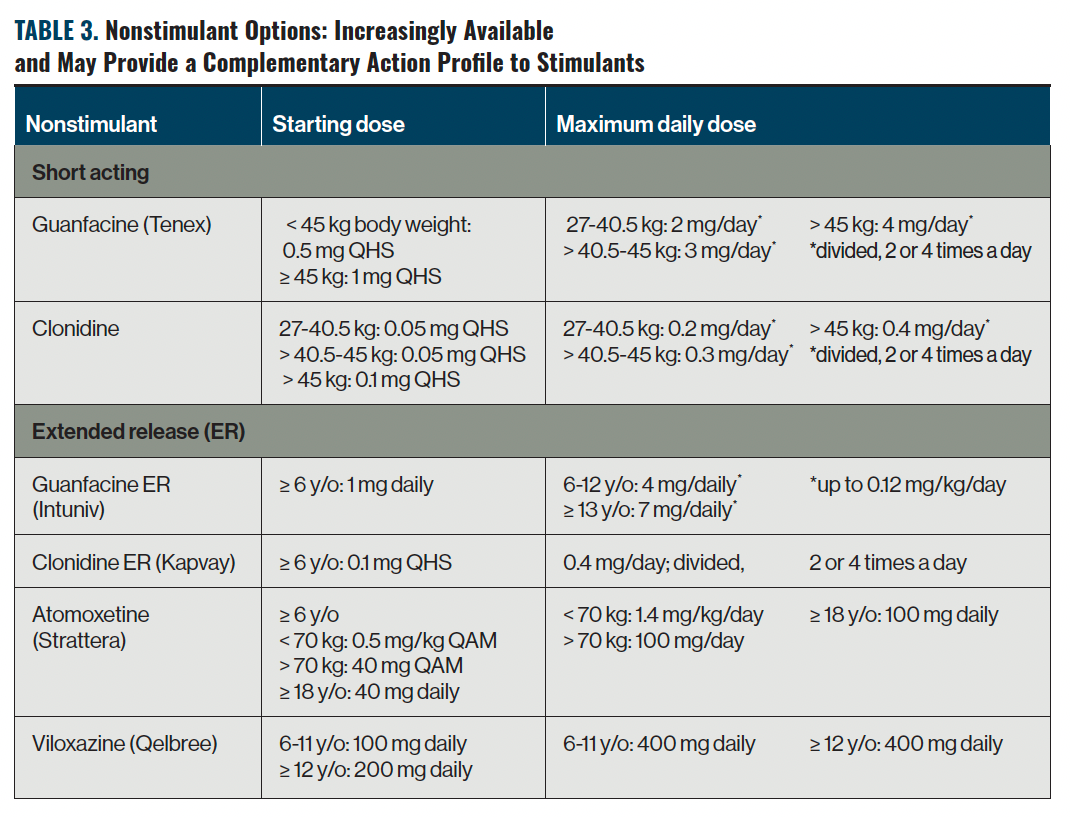 However, for severe cases or in individuals with significant comorbidities (eg, ODD, mood or anxiety disorders, autism, etc), response to medication can vary significantly. Medication adjustments might be needed as the child grows older, but not always. Treatment expectations should be addressed starting at the initial appointment while establishing the treatment plan. This will help build trust with the patient and parents, and it can prevent undue stress. In regard to treatment duration, this too varies from case to case. However, ADHD is considered a chronic condition and symptoms are often still experienced in adulthood. The decision to continue treatment will depend on the individual.

It is not uncommon for children to experience adverse effects from psychotropic medications. With stimulants, the most common adverse effects include appetite suppression and insomnia. In regard to appetite, changes in routine and diet can help offset appetite suppression. However, if the child has experienced significant weight loss, it might be necessary to consider trying a different medication such as a nonstimulant. Sleep disturbances might be a medication adverse effect but often the problem precedes the medication trial. If severe, alternative treatment should be considered. Otherwise, improving sleep hygiene can resolve insomnia. Sleep aids also can be considered. In the event that sleep disturbance is due to delayed circadian rhythm, improvements in sleep hygiene and light therapy can be helpful. It is essential that sleep disturbance be addressed to avoid exacerbation of ADHD symptoms.

Behavioral interventions for ADHD include evidence-based parenting interventions such as parent-child interaction therapy and the Incredible Years program. The core features of these are positive interventions that differentially reinforce desired behaviors and improve the quality of the parent-child attachment relationship. These interventions are indicated as first-line treatment for toddlers and preschool children. They are also indicated for older children with comorbid ODD or other behavioral or parenting concerns that are not core ADHD symptoms. In addition, school interventions such as the 504 Plan and individualized education program (IEP) are often utilized. The 504 Plan provides accommodation and support to allow students to make use of the general education setting. For those students identified as requiring special education, an IEP is drafted. An IEP outlines the special education instruction, supports, and services a student needs to succeed in school. Diagnosis and persistence of ADHD into adulthood is a different topic altogether, and much research is going on in that field.

ADHD is one of the most common neurodevelopmental disorders of childhood. It is highly heritable and more diagnosed in males. However, the exact cause for it is not known. The diagnosis of ADHD is a clinical one; therefore, it is necessary to obtain a thorough history from parents, patients, and teachers. Treatment is the same regardless of the patient’s ADHD subtype, and stimulant medications are usually the most effective form of treatment. For patients with comorbidities, psychotherapy (ie, individual therapy, group therapy, parent management training) will likely be necessary to achieve adequate behavioral control.

As mental health providers, it is imperative that we educate families about the importance of managing ADHD. We must serve as advocates for our patients to ensure that they receive an adequate education and have access to resources to reduce the incidence of comorbid psychiatric illness, substance use disorders, relational or legal problems, and employment and financial instability.

Dr Nazario is an assistant professor of psychiatry and behavioral sciences at Baylor College of Medicine in Houston, Texas.