Whatever the etiology, some extreme views come very close to the behaviors of bipolar mania, as illustrated in a recent documentary. 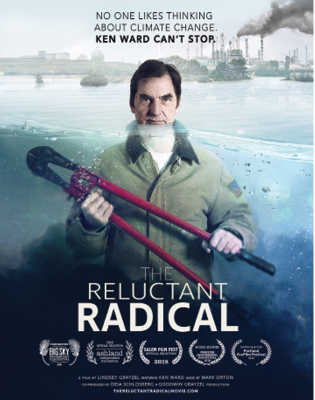 Do you sometimes have trouble continuing your daily work under the shadow of looming climate change? Wonder about chucking your practice and working exclusively on ending our reliance on fossil fuels? Is someone who devotes his life to arresting climate change a fanatic-or maybe even manic? Let’s take a brief tour through climate science to the story of such a man who acquired such a diagnosis.

Harvard historian of science Naomi Orestes1 asserts that science is not simply the result of following “the scientific method” of rigorous hypothesis testing. Rather, she believes that science is a process of arriving at a consensus, a current working understanding.2 This is why a physicist may accept the idea that a vaccine increases one’s safety even without being able to deeply evaluate the epidemiologic data, or a geologist accepts speciation by natural selection without examining all the relevant data: they rely on the consensus of scientists who specialize in epidemiology or evolution. Says Orestes, we can think of scientific knowledge as the result of “a jury of geeks.”

Science’s current working understanding of climate indicates that the earth is warming rapidly, sufficient to cause social disasters beyond anything humans have ever seen, during most of our patients’ current lifetimes. If you have any difficulty with this assertion, please do listen to Orestes’ TED talk on science first, then the World Bank report predicting climate-driven migration of 140 million people by 2050.3

Watching humans destroy the very basis of their existence (a stable climate), one man thought “this is insane.” He could not understand how we could persist in our current behaviors. He thought a global awakening to our collective insanity was emergently needed. So he dedicated his life to helping people recognize and respond to the problem of climate change. The result: he was diagnosed as bipolar and given lithium.4

Was this man fanatic, or manic? What is the difference? The literature on this question is surprisingly small: there are no references on Pub Med for a search of fanatic manic, or fanatic bipolar, for example. A more substantial work has examined the boundary of religious and delusional beliefs (some of it reviewed in Iyassu et al5). A lengthy user post and replies on the International Bipolar Foundation (IBPF) website includes many descriptions of the overlap of manic phases and intensified religious thinking.6 Indeed the term “fanatic” has a strong connection etymologically to religion (from fanum, a holy place, sanctuary or temple; and the verb fano, to devote).

But not all fanaticism is religious. Perhaps fanaticism itself is a disease, like alcoholism: a Psychology Today post suggests there should be a Fanatics Anonymous.7 Or perhaps fanaticism is like a brain infection, a la the parasite that can infect an ant’s brain and make it climb up a blade of grass where it is more likely to be eaten by the cow that is the parasite’s next life-cycle port of call.8 Perhaps fanaticism is a neurologic problem: combat injury to the frontal cortex is associated with fundamentalist beliefs, according to Zhong and colleagues.9

Whatever the etiology, some fanaticism comes very close to the behaviors of bipolar mania: energized devotion to an idea. Sex and money are frequent foci, but also political ideas: see, for example, the complex patterns of bipolar-like behaviors in world leaders, examined by Nassir Ghaemi in his book A First-Rate Madness (narcissism is just the beginning).10 In this territory of highly uncertain boundaries between passion and determination and mental illness lies the story of the man who had a diagnosis of bipolar mania based on his insistence that humankind itself is insane for continuing to mine and burn fossil fuels. It’s an interesting twist, no?

You must see the documentary of this man, The Reluctant Radical, at your earliest opportunity.4Look for local showings. It is a fascinating tour through fanaticism and its consequences, including bipolar diagnosis (in this case, likely over-diagnosis). It’s a polished production, easy to watch, with a message of the utmost importance: that we ourselves are indeed acting insanely and must quickly recognize our own collective “mental illness” with radical behavior change.

Have something to say? Write us at editor@psychiatrictimes.com to share your views. We might include your letter at the end of this article, possibly with a response from the author. Please include your full name, title, and affiliation for consideration.

This article was originally published on 10/15/18 and has since been updated.

Dr Phelps stopped accepting honoraria from pharmaceutical companies in 2008 but receives honoraria from McGraw-Hill and W.W. Norton & Co. for his books, including Bipolar, Not So Much, which he coauthored with Chris Aiken, MD.

3. World Bank. Climate Change Could Force Over 140 Million to Migrate Within Countries by 2050. https://www.worldbank.org/en/news/press-release/2018/03/19/climate-change-could-force-over-140-million-to-migrate-within-countries-by-2050-world-bank-report. Accessed November 14, 2018. 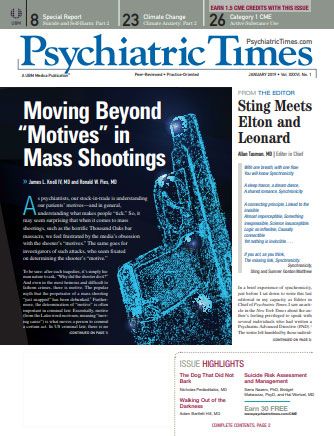 Safe Communication About Suicide in the Digital Age
Walking Out of the Darkness
An Integrated Care Approach to Identifying and Treating the Suicidal Person in Primary Care
Zero Suicide: The Dogged Pursuit of Perfection in Health Care
Suicide Risk Assessment and Management: Tips for Improving Care and Outcomes
Child Psychiatrists: On the Front-lines of Neuropsychiatry
In the Room With Climate Anxiety: Part 2
Use of Psychodrama With Adolescents
The Dog That Did Not Bark
Sting Meets Elton and Leonard
Substance Use Disorders in Crisis Settings: Engagement, Assessment, and Intervention Approaches
Rocko
Nutritional Psychiatry: The Gut-Brain Connection
The Therapeutic Potential of Self-Disclosure
Monarchs and the President
Related Videos
Related Content