Blood Tests for Diagnosis of Schizophrenia and Depression? 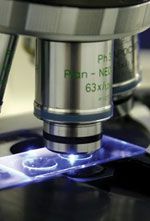 At this year’s American Psychiatric Association’s annual meeting in Hawaii, Professor Sabine Bahn, MD, PhD, MRCPsych, Director of the Cambridge Centre for Neuropsychiatric Research (CCNR) and Director/Cofounder of Psynova Neurotech Ltd, described her 15-year search for biomarkers of neuropsychiatric disorders and the development of VeriPsych-reportedly the first blood-based diagnostic test to confirm the presence of recent-onset schizophrenia. It is not a genetic test, but rather an automated test that uses a single serum sample to identify 51 protein biomarkers. It is designed to help mental health professionals arrive at a diagnosis.

For Bahn, who is also Chair of Translational Neuroscience at Erasmus Medical Centre in Rotterdam, the Netherlands, the search for biomarkers in psychiatric disorders is a personal pursuit. Her father had bipolar disorder.

Biomarkers have multiple applications, Bahn explained to APA attendees. These include the identification of high-risk individuals and disease subgroups that could serve as target populations for intervention trials; facilitation of “objective” diagnosis; monitoring of patient response to drug treatments; and assessment of patient compliance.

According to Bahn, she and the more than 20 scientists at CCNR are seeking to develop molecular diagnostics for major neuropsychiatric disorders and to determine the cellular mechanisms that regulate the expression of biomarker molecules altered in these states so as to develop novel therapeutic approaches.

For example, Bahn told APA attendees that in the team’s examination of postmortem brain tissue of patients with schizophrenia, they found evidence of abnormal glucose utilization. Schizophrenia, she said, might be considered “diabetes of the brain.”

Bahn and her team then moved to cerebrospinal fluid (CSF) in living patients “to see if we could identify the same changes as seen in the postmortem brain.”

“Our findings suggest alterations in glucoregulatory processes in CSF of drug-naive patients with first-onset schizophrenia. Short-term treatment with atypical antipsychotic medication resulted in a normalization of the CSF disease signature in half the patients well before a clinical improvement would be expected,” she said.

Bahn’s team discovered a set of 51 biomarkers with linkages to schizophrenia and to various biochemical pathways, including inflammation and metabolism, as well as cell-to-cell signaling.

The results also suggest that the initiation of antipsychotic treatment during a first psychotic episode may influence treatment response and/or outcome.

Eventually, the team moved to using its molecular profiling techniques on blood serum.

During the developmental stage of VeriPsych, 200 biomarker candidates were looked at to assess their connection to schizophrenia. Bahn’s team discovered a set of 51 biomarkers with linkages to schizophrenia and to various biochemical pathways, including inflammation and metabolism, as well as cell-to-cell signaling.

In a subsequent study, the 51 biomarkers were validated in com-bination with a mathematical pro-cess to separate patients with schizophrenia from normal controls.2 The study included analysis of more than 800 blood samples. The panel of 51 markers yielded an average sensitivity and specificity of 85% or greater across 5 clinical centers, according to Bahn.

More recently, Bahn and her team used a multiplex molecular profiling approach to measure serum concentrations of 181 proteins and small molecules in 250 patients with first- and recent-onset schizophrenia along with 35 who had major depressive disorder (MDD), 32 who had euthymic bipolar disorder, and 45 who had Asperger syndrome. There were 280 control subjects. The results, published in Molecular Psychiatry, demonstrated that a biological signature of schizophrenia can be identified in blood serum, and this can distinguish persons with schizophrenia from healthy controls and from those affected by related psychiatric illnesses that have overlapping symptoms.3

Since VeriPsych’s launch for schizophrenia in the fall of 2010, psychiatrists in a variety of treatment settings have ordered the test for hundreds of psychiatric patients, according to Michael Spain, MD, Myriad RBM’s Chief Medical Officer. The test costs $2500, and Spain said “numerous insurance carriers” are reimbursing for it. For patients without coverage, the company promises to work with them on “a reasonably acceptable financial assistance package.”

Spain said Myriad RBM is now “working on a differential product that would help to diagnose, identify, and discriminate schizophrenia patients from bipolar and unipolar patients.” It is based on the recent research conducted by Bahn’s team that was published in Molecular Psychiatry. Eventually, he added, the company hopes to expand the test’s availability to other countries.

“In the same way that a person with chronically high serum levels of glucose would be identified as diabetic and treated medically, tests like VeriPsych will hopefully allow for earlier diagnosis and treatment of major mental illness, which has been proven to lead to better patient outcomes,” said Spain. “Further, VeriPsych and our products in development help to underline the physiological and biological aspects of major mental illness and may hopefully lead to better understanding and treatment for patients with these disorders.”

In a scientific and clinical report session at the APA’s recent annual meeting, Perry Renshaw, MD, PhD, Professor of Psychiatry at the Uni-versity of Utah School of Medicine and Director of Magnetic Resonance for the Utah Brain Institute, presented clinical data on a multi-analyte blood test developed by Ridge Diagnostics, Inc, to aid in the diagnosis and management of MDD.

Founded in 2006, Ridge Diagnostics is located in San Diego and has its CLIA-certified laboratory in Research Triangle Park, NC, although it is planning for another lab in California. Its products are based on a proprietary Human Biomarker Library and Hyper-Mapping technology. In late 2010, the company began marketing its first-in-class blood test for MDD in Southern California and North Carolina. In the very near future, it plans to expand the test’s commercial availability throughout this country.

The diagnostic test was developed by researchers evaluating a variety of serum-based biomarkers implicated in key physiological processes involving depression. These include representative markers of the neurochemical, metabolic, inflammatory, and hypothalamic-pituitary-adrenal axis pathways, according to Ridge Diagnostic’s white paper.4

In his APA presentation, Renshaw described a community-based study designed to validate the biomarker panel for MDD. Thirteen psychiatrists, 1 nurse practitioner, and 1 physician assistant participated in a Clinical Experience Program (CEP) in which they enrolled patients with previously diagnosed MDD or those in whom MDD was suspected.

A total of 95 patients with a range of psychiatric diagnoses-predominantly MDD-were enrolled, and 80 completed the study. In addition, 51 healthy individuals constituted a control group.

For the vast majority of patients, MDDScore results ranged from 6 to 9. Their test scores were highly predictive of the clinical diagnosis they had previously received.

The MDDScore was able to discriminate patients with a clinical diagnosis of MDD from the normal control group, according to Renshaw. The P value for segregating MDD patients from healthy controls was highly significant (P < .0001) over a broad range of male and female patients.

At the time of study entry, all MDD patients were receiving one medication or a combination of medications for their psychiatric disorders, such as escitalopram or duloxetine. However, test results did not seem to be affected by the presence of antidepressants, Renshaw explained.

Renshaw told Psychiatric Times that beyond the CEP, he helped Ridge’s founders organize clinical trials of their new technology in Boston and in Seoul, South Korea.

According to Lonna Williams, Ridge Diagnostics’ Chief Executive Officer, the company has completed 5 clinical studies and has 2 ongoing prospective studies for the diagnosis of depression in adults.

“Additionally, we are currently enrolling teenagers in an NIH-funded study for adolescent depression. On conclusion of that study, we plan to make a test available to aid in the diagnosis of depression in adolescents,” she said.

The company also is planning a clinical study to further validate the MDDScore for use in the primary care population; has proposed studies with the US military; and has a biomarker panel for antidepressant treatment efficacy/monitoring being evaluated in 2 clinical studies.

“We do not have a launch date for the therapy-monitoring product at this time but expect it sometime in 2013,” Williams said. “In conjunction with a major academic center in the US, we will begin research on a blood test to aid in diagnosing bipolar disorder.”

The MDDScore test, Williams said, currently costs $745 and is covered by some insurance companies. Payment plans are available for patients without coverage.

In clinical studies and in response to test orders from psychiatrists, other mental health professionals, and physicians treating chronic pain, the company had generated nearly 1000 test results as of early July.

“Too many people with depression are not diagnosed using standard clinical assessment measures,” he said. “Moreover, there is also a real possibility that the Ridge biological marker technology will be useful in optimizing treatment selection by assessing 4 different marker domains (neurotrophic, metabolic, immune, and endocrine).”

Williams added that in the company’s main market research, psychiatrists reported up to 30% of their depressed patients are difficult to manage, do not comply with their treatment plan, and have work and family issues.

“By having a biological indication of depression, patients and their families have an improved understanding of the condition as a medical one, which reduces the stigma associated with mental health disorders and leads to an improvement in treatment compliance. We have several case studies citing examples of the test results being used by psychiatrists to improve communications with their patients and ultimately improve outcomes,” she said.

“Market research,” she added, “also suggests that up to 50% of MDD cases are missed at the primary care level, leading to delayed treatment and other unnecessary, costly diagnostic evaluations.”

At the Japanese Society of Biological Psychiatry Conference in Tokyo last May, researchers reported devising a test that measures the concentration of phosphoric acid in the blood as an indicator of major depression.

The simultaneous and comprehensive measurement of metabolites in plasma from depressed subjects (n = 34, diagnosed at the National Center of Neurology and Psychiatry in Kodaira, Tokyo) and demographically matched nondepressed subjects (n = 38) resulted in the identification of the new depression biomarker, ethanolamine phosphate (EAP), according to Ohashi. The study showed that patients with depression had lower plasma concentrations of EAP.

“We are developing a reagent to gauge the level of EAP within minutes,” Ohashi said. “We expect to complete the development of reagent in a year and to seek health ministry approval after conducting clinical trials.”

To conduct clinical trials of the depression test, HMT is attempting to recruit more than 1000 participants from the Gaien Mental Clinic and another research clinic in Tsuruoka, Japan. A journal article on the biomarker research also is being submitted.

Speaking about benefits of the test, Ohashi told Psychiatric Times, “the guidelines for diagnosing depression include elements that are difficult to capture objectively; for example, ‘insomnia or hypersomnia nearly every day,’ ‘loss of energy,’ and so on. What should doctors do if patients falsely report their symptoms? On the other hand, some depressed patients might underplay their symptoms because of the stigma of disclosure and perhaps because of the fear of receiving antidepressants. We have identified a biomarker of major depression that correlates with diagnosis by an experienced psychiatrist. This is very good news for general practitioners to whom many depression patients go at the first visit.”