We are using 4 different approaches to bipolar diagnosis, according to the author of this commentary. 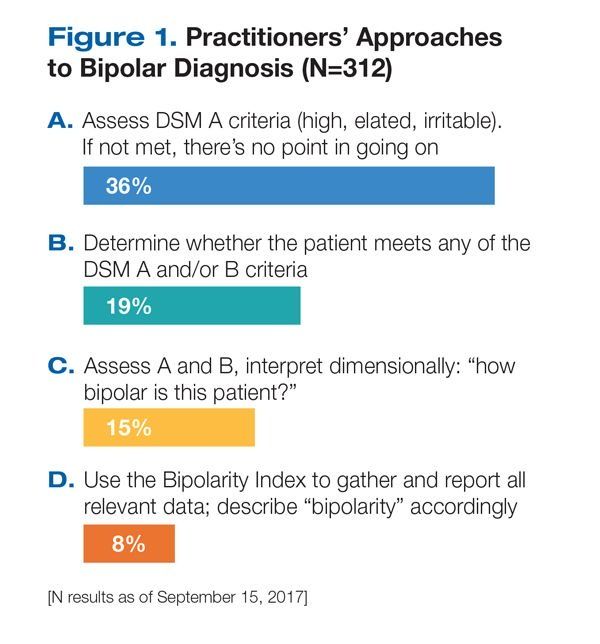 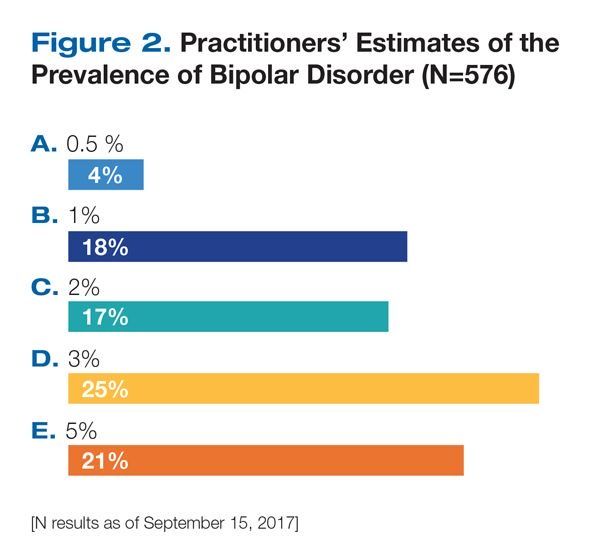 According to our informal reader survey 2 months ago, respondents who identified as practicing psychiatrists and psychiatric nurse practitioners are using 4 different diagnostic approaches to bipolar disorder. When given descriptions of how to look for bipolar disorders in new patients, no single approach was the clear winner (Figure 1). Can you imagine surgeons using 4 different approaches to the diagnosis of appendicitis? (“I just look for McBurney’s sign”; “I use the ultrasound results”; “I use the cbc and the ultrasound”; “I interpret all these findings together”).

Our 4 different approaches may explain a similar wide difference in practitioners’ estimates of the prevalence of bipolar disorder. In an earlier informal reader survey responders were evenly spread between 1% and 5%. That’s a 5-fold difference in estimates, from 1 person in 100 to 1 person in 20. See the results in Figure 2.

Categorical or dimensional? (DSM or spectrum)

Note that one-third of practitioners endorsed the pure DSM-based categorical approach (option A in Figure 1). Technically correct. Efficient. And utterly at odds with bipolar phenomenology. Yes, the DSM operates this way, but even the DSM-5 chairman suggested that mood disorders “might be better represented as an affective disorders continuum, with variable expressions of bipolarity representing dimensions of underlying pathophysiologic processes” (emphases mine).

In 2008 the International Society for Bipolar Disorders, recognizing the chaos still evident in Figure 1, convened a group of bipolar specialists to review the available literature and make recommendations on how to approach bipolar diagnosis. The Bipolar II subgroup summarized: “Dichotomies [such as DSM yes/no categories] are useful for education, communication, and simplification. Unfortunately, simplicity is useful, but untrue-whereas complexity is true, but useless.”1 Cleaving to the DSM rules is simple, but untrue.

Fortunately, “categorical or dimensional” is itself a false dichotomy. One need not abandon the DSM to incorporate a spectrum view. Patients whose symptoms are near the extremes-either in their presence or their complete absence-can be handled with the DSM approach, yes or no. Patients whose bipolar markers are less numerous or prominent warrant examination using a dimensional approach.

Gathering all the relevant data

The key to a fully informed approach to bipolar diagnosis is to gather all the relevant data. You take a family history, regardless of the presence or absence of DSM A criteria? Right, sure you do, we all do. But if that behavior is logical, then it is also logical to gather similarly clinically relevant data on othermarkers of bipolarity.2 Some are stronger than others. In addition to a family history of bipolar disorder, you could just check for postpartum depression; strongly adverse reactions to antidepressants suggestive of induced mixed states (agitation, irritability, extreme insomnia, suicidal ideation) or hypomania/mania (increased energy, increased activity, thought acceleration, or the much more rare finding of elation); highly recurrent discrete episodes of depression; and a first depression in late adolescence or early 20s.

Or you could just routinely administer a questionnaire to gather these strong markers and a few weaker markers as well, using the 2-page MoodCheck questionnaire (detailed in last month’s essay).

Imagine the uniformity that would result if we all began our diagnostic assessment with the same database. Not just McBurney’s sign, or just an ultrasound or CBC, but all the relevant data on every patient. We might differ in our interpretation of those data and how to vary treatment accordingly. Indeed, surely we would, because we have almost no research to guide us when treating a patient with “subthreshold bipolarity” (the group whose numbers swell bipolar prevalence from 1.1% [BP I plus BP II] to 3.3% of the general population, and as much as 47% of all patients with depression according to one investigation).3

(Does that 47% figure disturb you? Please see the abstract, and note the author list, all highly respected members of the International Society for Bipolar Disorders, bipolar specialists from around the world. This 47% figure may generate extreme cognitive dissonance. Be careful before you dismiss it.)

To move away from an embarrassing diversity of diagnostic approaches, now, Step One would be to decrease the diversity in the questions we ask of patients to detect bipolarity. We should gather all the relevant data, every new patient, every time. The DSM A criteria are no defense: a full understanding of bipolar phenomena dictates a more comprehensive approach. No more “I just look for McBurney’s sign”!