“Mrs Blue” is a 70-year-old Caucasian woman with a 45-year history of schizophrenia. She also has posttraumatic stress disorder (PTSD) stemming from a sexual assault in early adulthood and occasionally smokes marijuana. Her current psychotropic regimen includes aripiprazole (Abilify), valproic acid (Depakote), and citalopram (Celexa), and she is overall stable with no psychiatric hospitalizations in the past 6 years. Prior to the schizophrenia diagnosis, she underwent a hysterectomy at age 20 for ovarian cancer. She has comorbid obesity, hypertension, hyperlipidemia, and osteoporosis. Three years ago, she received a diagnosis of chronic renal failure. Her most recent blood urea nitrogen to creatinine ratio is 51:2.15, with a glomerular filtration rate of 26.

The investigators conducted data-driven analyses on patient phenotypes before and after the index diagnosis of schizophrenia and compared data on phenotypes with those of matched controls without schizophrenia. The Aetna data set contained 86 million participants from all 50 states, the District of Columbia, 5 populated territories, and Armed Forces Europe, with claims data from January 2008 to December 2019. International Classification of Diseases, Ninth Revision (ICD-9) and ICD-10 codes formed the basis of corresponding phenotype codes or phecodes. Schizophrenia was defined as at least 3 occurrences of phecodes 295 and 295.1.

The authors analyzed 1890 phenotypes based on phecodes (requiring at least 3 occurrences) before diagnosis for patients with a first documentation of schizophrenia between ages 15 and 29 years. Data for all participants were analyzed using the Fisher exact test. Data on phenotypes occurring after the onset of schizophrenia were analyzed using Cox proportional hazards models. Patients were removed from these analyses if the phecode was within 1 year of the first schizophrenia diagnosis. The Bonferroni correction was applied to P-values for multiple comparisons.

The authors identified 61,453 patients with schizophrenia (prevalence, 0.7%; 47% were male); average length of patient records was 6 years. The investigators noted 144 phecodes were significantly enriched in patients who later received a schizophrenia diagnosis. Some of the top phecodes were suicidal ideation (odds ratio [OR], 51.2), bipolar (OR, 36.1), antisocial/borderline personality (OR, 18.4), substance addiction and disorders (OR, 17.6), and PTSD (OR, 16.2). Women who later developed schizophrenia were more likely to have type 2 diabetes, obstructive sleep apnea, and eating disorders; men were more likely to have acute renal failure, developmental delay, and rhabdomyolysis (Table). 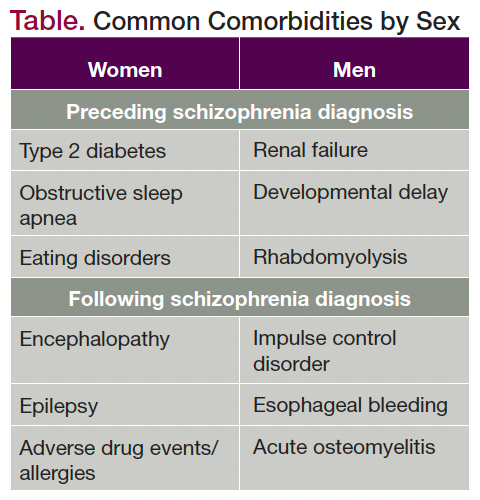 The authors also noted that 402 phecodes were significantly enriched after the diagnosis of schizophrenia. Some of the top phecodes were coma/stupor/brain damage (HR, 87.3), altered mental status (HR, 86.2), alcoholism (HR, 47.3), and septicemia (HR, 30.4). Women were more likely to develop encephalopathy, epilepsy, and adverse drug events or allergies; men were more likely to develop impulse control disorder, esophageal bleeding, and acute osteomyelitis.

Thus, the authors concluded there was a broad range of comorbidities enhanced in schizophrenia both before and after diagnosis, including PTSD, other anxiety disorders, and alcohol and other substance use disorders. In addition, patient sex significantly influenced associated comorbidities.

Study strengths included the large sample size and comprehensive data, consideration of comorbidities before and after the diagnosis of schizophrenia, and statistical correction for multiple comparisons. Study limitations included the potential lack of generalizability to other schizophrenia populations (ie, the investigation leveraged an employer-sponsored insurance claims data set), the relatively short follow-up time, and the inherent nature of phecodes that represent coarse categories of clinical phenotypes.

This study demonstrates the utility of large-scale, real-world data analyses to elucidate patterns of disease comorbidity, which can provide clinically useful information to treating clinicians.

How often do you see comorbidities in patients with schizophrenia? Which comorbidities are the most troublesome to treatment? Email us at PTEditor@mmhgroup.com.

Dr Miller is a professor in the Department of Psychiatry and Health Behavior at Augusta University in Georgia. He is on the Editorial Board and serves as the Schizophrenia & Psychosis section editor for Psychiatric TimesTM. The author reports that he receives research support from Augusta University, the National Institute of Mental Health, and Stanley Medical Research Institute.