Everyone Relapses Anyway. Or Do They?

Approximately 7.6% of men and 4.1% of women aged 18 and older suffer from AUD, but national surveys consistently demonstrate low utilization of treatments. 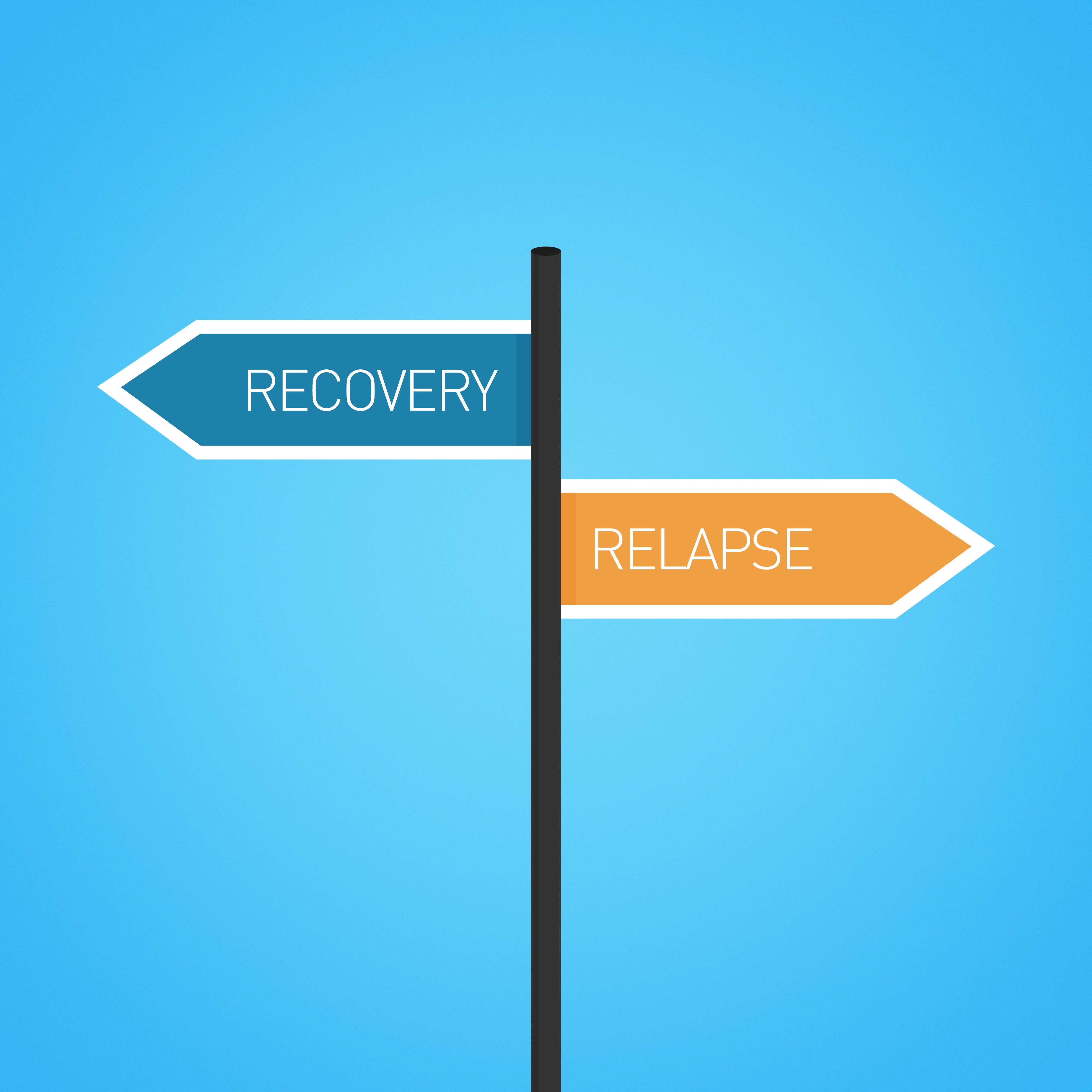 In this installment of Tales From the Clinic: The Art of Psychiatry, we examine the case of alcohol use disorder with difficult relapses. AUDs are known to be 1 of the most prevalent mental health disorders worldwide. This discussion examines comorbidities and barriers to treatment.

“Ms Frank” is a young woman with a history of alcohol use disorder (AUD), cocaine use disorder, posttraumatic stress disorder (PTSD), and bipolar disorder who is currently receiving psychiatric care at an outpatient program. She has a severe trauma history that has never been fully discussed with a therapist or psychiatrist, despite years of treatment. She has chronic suicidal thoughts after multiple previous attempts by overdose. Suicidality is increased in times of intoxication, and suicidal thoughts have never completely gone away even with the switch to lithium. She has failed over 15 medications and is often sensitive to adverse effects.

After a significant suicide attempt and inpatient rehabilitation for 90 days, Ms Frank achieved and maintained sobriety for almost 2 years prior to being put into a supervisory role at her sober living facility. Some of her duties in this included expelling people who had relapsed, including people she had gotten to know as friends. She felt that “everyone relapses anyway” and “there’s no point,” and subsequently relapsed herself with successive suicide attempts and psychiatric hospitalizations. She has since regained sobriety and gone to another 30-day rehab program. She continues to struggle with persistent suicidal thoughts and difficulty engaging with therapy; however, she has managed to again achieve and maintain sobriety for over a month with a medication regimen including naltrexone monthly injectable, which has reportedly helped with her cravings. She has previously tried and failed naltrexone by mouth, acamprosate, and disulfiram due to adverse effects. She regularly attends Alcoholics Anonymous meetings and therapy.

Ms Frank’s history is significant for a pervasive pattern of instability in personal relationships; impulsivity; affective instability; difficulty controlling anger; and recurrent suicidal behavior, gestures, and threats concerning for an underlying cluster B personality disorder. While she deals with these issues, she does maintain a close circle of friends and is able to maintain a consistent job.

AUDs are known to be 1 of the most prevalent mental health disorders worldwide. As seen in Table 1, according to the 2019 National Survey on Drug Use and Health (NSDUH), 7.6% of men and 4.1% of women aged 18 and older suffer from AUD.1 As the prevalence of AUDs has continued to rise, various methods of detection have been recommended. The Alcohol Use Disorder Identification Test (AUDIT) is recommended by the World Health Organization as a screening tool to detect alcohol problems. Different AUDIT scoring thresholds are required for men and women, as research has shown that AUDs in women have distinctive social and biological characteristics.

Table 1. Alcohol Use Disorder in the Past Year Among Persons Aged 18 or Older, by Gender: Percentages 2019

Adapted from “SAMHSA, Center for Behavioral Health Statistics and Quality. 2019 National Survey on Drug Use andHealth. Table 5.4B – Alcohol Use Disorder in Past Year among Persons Aged 12 or Older, by Age Group and DemographicCharacteristics: Percentages, 2018 and 2019.” In the public domain.

For the same amount of alcohol, women develop a higher blood alcohol concentration than men. Therefore, the Centers for Disease Control and Prevention (CDC) provides distinctive cutoffs for alcohol use and binge drinking in women vs men, as seen in Table 2. Women are also more susceptible to the toxic effects of alcohol such as cognitive disorders, heart disease, and liver cirrhosis. Women also differ in their approach to the health care system, which may influence their performance on self-reported screening tests.2 Women also often display a shorter trajectory from onset of alcohol use to the diagnosis of AUD. The prevalence of AUD in women has steadily increased in women, resulting in a narrower gender gap in AUD diagnoses.3 These are a few of the many reasons it is imperative to utilize a lower screening threshold when assessing female patients for AUDs.

Table 2. CDC Guidelines for Alcohol Use

Despite the increasing prevalence of AUDs and the multitude of services available, national surveys consistently demonstrate low utilization of treatments, as seen in Table 3.4 Gender disparities in the utilization of treatment are long-standing and significant. Women have about one-third to one-half the odds of utilizing any alcohol use treatment when compared to men.5 Fears of stigmatization and beliefs that treatment is ineffective seem to play a large role across the board. In a recent study, women were found to be more likely than men to report attitudinal barriers to treatment. These barriers consisted of shame, fear of others finding out, belief that no one can help, and the belief that the problem is not serious enough.6 Several gender-specific factors have been identified as reasons women are less likely to seek help, further warranting the need for tailored interventions.

Table 3. Received Alcohol Use Treatment in Past Year among Persons Aged 18 or Older, by Gender: Percentages, 2019

Adapted from “SAMHSA, Center for Behavioral Health Statistics and Quality. 2019 National Survey on Drug Use andHealth. Table 5.11B – Received Alcohol Use Treatment in Past Year among Persons Aged 12 or Older, by Age Group andDemographic Characteristics: Percentages, 2018 and 2019.” In public domain.

Although underutilized, effective and safe treatment for AUD is available through psychosocial and pharmacological interventions.7 The combination of pharmacotherapy and psychotherapy (cognitive behavioral therapy, individual and group drug counseling, motivational enhancement therapy, etc) has been found to enhance outcomes for AUD. Currently, the Federal Drug Administration (FDA)-approved drugs for AUD include disulfiram, acamprosate, and naltrexone. Disulfiram, commonly known as Antabuse, acts by blocking the metabolism of alcohol leading to an accumulation of acetaldehyde, a toxic substance that results in tachycardia, headache, nausea, and vomiting after an individual consumes alcohol. Acamprosate has been associated with decreased craving and consumption of alcohol through agonist activity at GABA receptors and inhibitory activity at NMDA receptors. Naltrexone, available in oral formulation as well as long-acting injectable form, has been shown to decrease cravings and help prevent relapse through its action as an opioid antagonist.

Advances in addiction neurobiology have led to the development of the FDA-approved medications previously mentioned; however, substance abuse retail medication sales remain relatively small when considering the size of the population that could benefit. According to the 2019 NSDUH, only about 7.3% of adults aged 18 and older with AUD received any treatment in the past year. As seen in Figure, less than 4% of patients with AUD were prescribed an FDA-approved medication for AUD.8 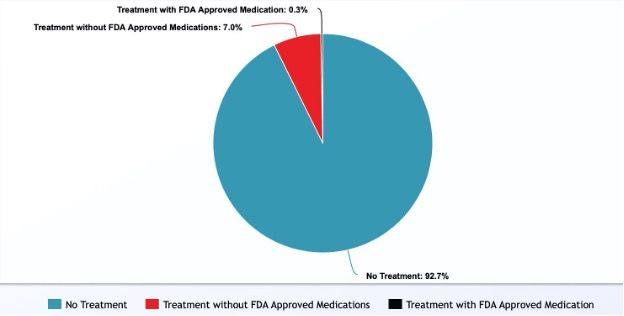 Figure. Treatment Patterns of AUD in Adults Aged 18 and Older15

Individuals struggling with AUD are unlikely to initially seek help from specialty providers. The best chance of identifying AUD usually occurs within the primary care setting; however, the recognition of AUD remains low in such settings.9 Studies have identified reasons such as limited time, limited organizational capacity, fear of losing patients, and feelings of incompetency regarding treatment of AUD as potential barriers regarding identification of AUD in primary care.10 Within primary care settings, there is evidence to support the effectiveness of AUD screening, brief interventions, and referral to specialized treatment (SBIRT). However, the implementation of models for identifying and treating AUD in primary care remain inadequate.9 Effective treatment may be more widely utilized if measures are taken to increase primary care participation, destigmatize AUD, and address inaccurate attitudes about treatment efficacy.

When formulating treatment plans for patients with cooccurring disorders, it is imperative to determine the chronology of onset of the diseases. The clinical course tends to be determined by the primary diagnosis. Comorbidity has particularly important clinical implications in cases where psychiatric symptoms increase the risk for suicide. AUD in patients with depressive disorder is associated with increased suicidality.11 Personality traits that are often associated with increased risk for alcohol abuse, impulsivity, negative emotionality, and antagonism are also characteristics of borderline personality disorder (BPD) and antisocial personality disorder.12

Although these disorders are highly comorbid and result in poorer prognosis when they occur together, there are limited treatments that target the symptoms of both BPD and AUD. There is promising evidence that some anticonvulsants (topiramate, lamotrigine)and second-generation antipsychotics (aripiprazole, olanzapine) may reduce the anger, impulsivity, and mood lability present in BPD. There are also studies suggesting that these same medications may also reduce alcohol craving and consumption.13 It should be noted that these medications are not FDA approved for BPD or AUD. Modified psychotherapies have been developed for the treatment of comorbid AUD and BPD (dynamic deconstructive therapy, dialectical behavior therapy, and dual focus schema therapy); however, there is limited evidence to support the efficacy of these modalities on treating symptoms of both disorders concurrently. Only dynamic deconstructive psychotherapy has been specifically tested on patients with both AUD and BPD. Evidence shows that although this therapy may be successful in treating symptoms of BPD, its efficacy in reducing alcohol consumption may not be sustained long-term.

The efficacy of the other 2 models in the treatment of AUD has not yet been established.13 Due to the lack of sufficient evidence, psychotherapies for antisocial personality disorder (ASPD) are limited.12 Although there is sparse evidence to support pharmacotherapy for ASPD, medications can be used to treat symptoms of the disease, such as aggression and impulsivity.14

Alcohol use disorders are known to be one of the most prevalent mental health disorders in the world. In order to effectively treat these disorders, an awareness and utilization of evidence based treatment options is imperative. Furthermore, barriers to seeking care in this particular population require special consideration when formulating treatment plans.

1. Substance Abuse and Mental Health Services Administration, Center for Behavioral Health Statistics and Quality. 2019 NationalSurvey on Drug Use and Health. Table 5.4B – Alcohol Use Disorder in Past Year amongPersons Aged 12 or Older, by Age Group and Demographic Characteristics: Percentages,2018 and 2019. Accessed January 5, 2022. https://www.samhsa.gov/data/sites/default/files/reports/rpt29394/NSDUHDetailedTabs2019/NSDUHDetTabsSect5pe2019.htm

2. Neumann T, Neuner B, Gentilello LM, et al. Gender differences in the performance of a computerized version of the alcohol use disorders identification test in subcritically injured patients who are admitted to the emergency department. Alcohol Clin Exp Res.2004;28(11):1693-1701.

4. Substance Abuse and Mental Health Services Administration, Center for Behavioral Health Statistics and Quality. 2019 NationalSurvey on Drug Use and Health. Table 5.11B – Received Alcohol Use Treatment in PastYear among Persons Aged 12 or Older, by Age Group and Demographic Characteristics:Percentages, 2018 and 2019. Accessed January 5, 2022. https://www.samhsa.gov/data/sites/default/files/reports/rpt29394/NSDUHDetailedTabs2019/NSDUHDetTabsSect5pe2019.htm