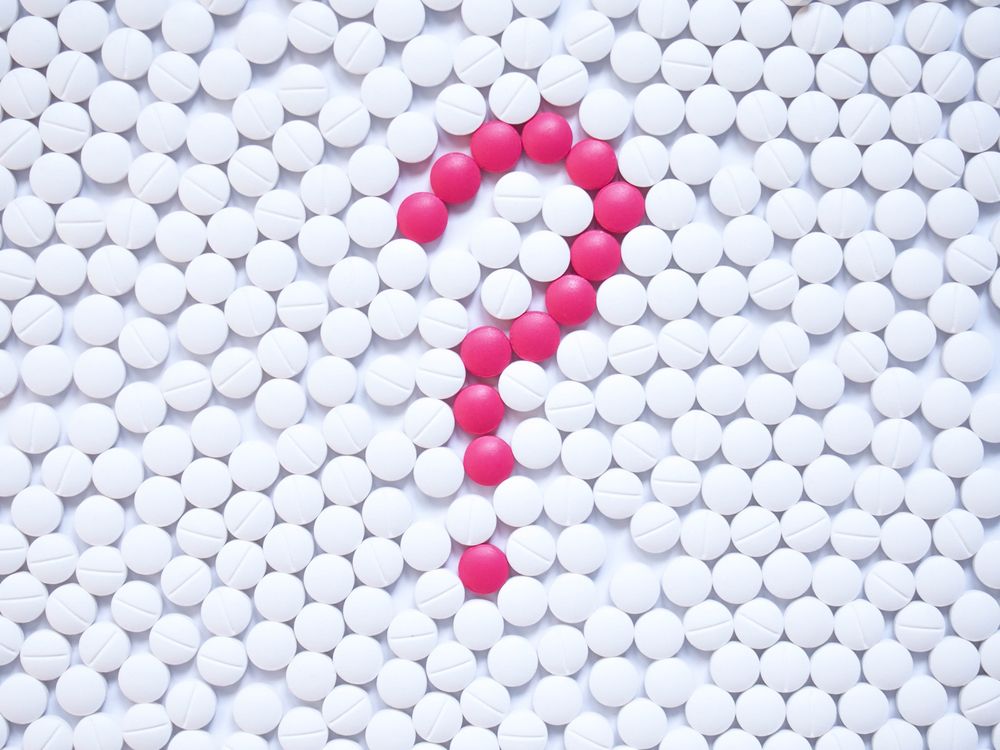 In every branch of science, nomenclature plays a vital role in allowing a common language to be employed so that a clear and consistent meaning is applied to any term that is routinely used. Such is the case when describing the mechanism of action of a particular drug at a particular receptor—or so it used to be. The title of this editorial may appear to contain a typographical error, but it does not: It is exactly as I wrote it. As the science behind receptor pharmacology has become increasingly complex, a common term currently used to describe a receptor mechanism of action—partial agonism—has served to confuse rather than clarify the mechanism of many drugs placed in this category.

When a Drug Meets a Receptor

All drugs—in fact, all molecules—have a specific binding affinity for a specific receptor in a prespecified chemical environment. This is commonly referred to as the drug’s inhibition constant (Ki) at a particular receptor and is usually written as a concentration in nanomoles (nM). The FDA-approved product insert of every drug lists the Ki’s at all relevant receptors in Section 12—Clinical pharmacology, subsection 12.2—Pharmacodynamics. The smaller the Ki at a particular receptor, the tighter the drug binds to that specific receptor.

As an example, drug X has a Ki = 1 nM at the dopamine-2 receptor (D2R) and a Ki = 100 nM at the histamine-1 receptor (H1R). That translates clinically into a mechanism of action whereby drug X is very potent at the D2R, but 100-fold weaker at the H1R. If drug X is an antagonist at these 2 receptors, this predicts with high likelihood that drug X would be a good antipsychotic, but a weak antihistamine. If the antagonist drug Y, on the other hand, has a Ki = 1 nM at the H1R and a Ki = 100 nM at the D2R, drug Y should be a great antihistamine, but a weak antipsychotic.

The Ki gives us an important piece of information, but it does not tell us the complete story about what that drug is actually doing at a particular receptor—only how tightly it is binding. Many psychiatric medications bind to multiple receptors from the same or different neurotransmitter systems. To clarify, Ki’s are determined in vitro, and they can vary from one assay to another due to the properties of each assay (eg, pH, ion concentrations, temperature, and other physical chemistry properties). This explains why we can see a range of Ki’s for the same drug at the same receptor from different studies. Despite these differences, the general properties of a drug at various receptors remains consistent across different assays. (Nonetheless, this situation supports the strong need for developing a Ki database based on exactly the same assay conditions for each drug/receptor studied.) The good news is that following the 2003 sequencing of the human genome, receptors that are utilized to determine the binding affinities of drugs that will be used in humans are now cloned from the human genome. In years past, it was common to use rat, mouse, rabbit, or monkey receptors, which are not predictably analogous, structurally, to the corresponding human receptors.

How Does the Drug Impact Receptor Functioning?

Once we have determined the Ki of a specific drug at a specific receptor in a well-defined and reproducible chemical environment (assay), the next step is understanding how that drug changes the activity of the receptor. In the early days of pharmacology, it was simply a matter of determining if a drug appeared to agonize (activate) the receptor or antagonize (block) the receptor. Through decades of increasingly sophisticated research in many areas of basic science, our current understanding defines a wide spectrum of drug–receptor functional actions. Our current descriptions of drug–receptor activity that may occur when a drug binds to a receptor can be found in the Table. 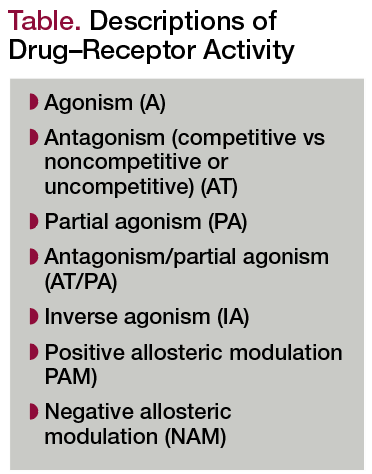 Confusion of the Descriptor “Partial Agonism”

Let us focus on 2 of these mechanisms, both of which have been used interchangeably and, as a result, have confused the practicing clinician regarding what is actually going on at the drug–receptor interface in our patients’ brains: partial agonism (PA) and antagonism/partial agonism (AT/PA). When I was receiving my biochemistry training, these descriptors clearly differentiated 2 distinct mechanisms of action of a drug.

An AT/PA drug provides both of these functions simultaneously. Clinically useful AT/PA drugs have binding affinities at the target receptor that are much stronger than the binding affinity of the EN. This combination of AT and simultaneous PA at the EN receptor allows for a predictable pharmacodynamic effect if the AT/PA is dosed to occupy 100% of the target receptor. At full AT, the percent of PA determines the functional activity of the EN receptor. If the AT/PA has 10% PA, it functions as an antagonist. If the AT/PA has 90% PA, it functions as an agonist. Consequently, you could create a series of AT/PA drugs that all share the same potent AT, but their PA would range from 1% to 99%. When dosed to 100% antagonism, the percent PA would determine the functional activity of that receptor. This allows for a predictable effect at the EN receptor.

When both PA and AT/PA are described as PA, as they currently are in the psychiatric literature, the opportunity to understand the clinical effect of the drug is lost, as these mechanisms are not differentiated. Two excellent publications describing the AT/PA activity of buprenorphine1 and cariprazine2 from 2008 and 2010, respectively, specifically define these drugs as AT/PA in the papers’ titles. Over the past 10 years, for reasons that I do not understand, the term partial agonist has become synonymous with both AT/PA and PA.

Buprenorphine and the Mu Opioid Receptor

Buprenorphine is a commonly prescribed drug that has a predictable effect on an individual who is using opioid(s), based on its activity as an AT/PA at the mu opioid receptor (MOR). Understanding its AT/PA provides an exemplary model of how this combination of receptor effects manifests clinically. PET scans on live human brains have demonstrated that buprenorphine occupies close to 100% of the MORs at doses between 18 mg and 24 mg per day, depending on the patient. Like naltrexone, naloxone, and samidorphan, buprenorphine is a potent antagonist at the MOR, but unlike the other 3, it also has functional simultaneous partial agonism approximately equal to 20 mg of methadone at full MOR occupancy. Being a potent antagonist at the MOR, buprenorphine displaces endorphins and most mu opioid agonists, including morphine, heroin, oxycodone, oxymorphone, hydrocodone, hydromorphone, and methadone. This combined AT and PA is the pharmacological reason buprenorphine is such a successful drug in the treatment of opioid use disorders.

Any seasoned buprenorphine prescriber will tell you that adding 24 mg of buprenorphine to an individual’s regimen when that person has been taking more than 30 mg of methadone for several months will result in immediate severe opioid withdrawal.3 The potent antagonism prevents other mu opioid agonists from synergistically increasing buprenorphine’s agonism at the MOR. Referring to buprenorphine as a PA does not convey the complexity of what is happening at the MOR: potent antagonism that displaces endorphins and most opioid agonists, while simultaneously partially agonizing the MOR with approximately 20-mg equivalents of methadone.

AT/PA and the Dopamine2 Receptor

All antipsychotics, both typical (first generation) and atypical (second generation), are pure D2R antagonists except for 3: aripiprazole, brexpiprazole, and cariprazine. These 3 are sometimes called “third generation” due to their shared property of AT/PA at the D2R. This mechanism of action at the D2R creates different pharmacological rules than those we apply for the other antipsychotics. Referring to these 3 antipsychotics as PA creates a great deal of confusion about their mechanism of action as well as how to dose them when cross-titrating from a pure antagonist or when they are used in combination therapy.4

It is the very potent AT at the D2R that is pharmacologically relevant to the efficacy of aripiprazole, brexpiprazole, and cariprazine as antipsychotics. These 3 agents are the most potent of all FDA-approved antipsychotics, with subnanomolar Ki’s ranging from 0.3 to 0.49 nM. To effectively treat psychotic symptoms, all 3 antipsychotics are dosed to nearly saturate the D2R, which would lead to severe movement disorders, hyperprolactinemia, cognitive blunting, and dysphoria were it not for their PA. At the doses necessary for these 3 drugs to be effective in treating psychotic symptoms, they approach 100% D2R antagonism, hence displacing most other antipsychotics as well as dopamine from the D2R.

The degree of PA for these drugs at the D2R ranges from approximately 25% to 35%, which is occurring simultaneously with the nearly saturated D2R antagonism. This results in a functional neuronal physiology of 65% to 75% D2R antagonism, which is considered the ideal antagonism to treat psychotic symptoms. Not surprisingly, none of the 3 drugs raise prolactin levels, as none achieve greater than 75% D2R functional antagonism despite near D2R saturation. At low doses, the partial agonism may contribute to their antidepressant properties.

When prescribing medications, a clinician relies on a drug’s defined pharmacokinetic and pharmacodynamic properties, involving numerous factors, to make informed choices as to what medication to use. One of those factors is the mechanism of action occurring at the various drug–receptor interfaces. The casual use of the term PA, rather than more specifically defining a drug’s mechanism as a PA or an AT/PA, can result in unexpected and problematic clinical outcomes.