This book focuses on Islamophobia’s multifaceted nature, its broad and specific clinical challenges, and its connections with the current political realities of a convulsed world. 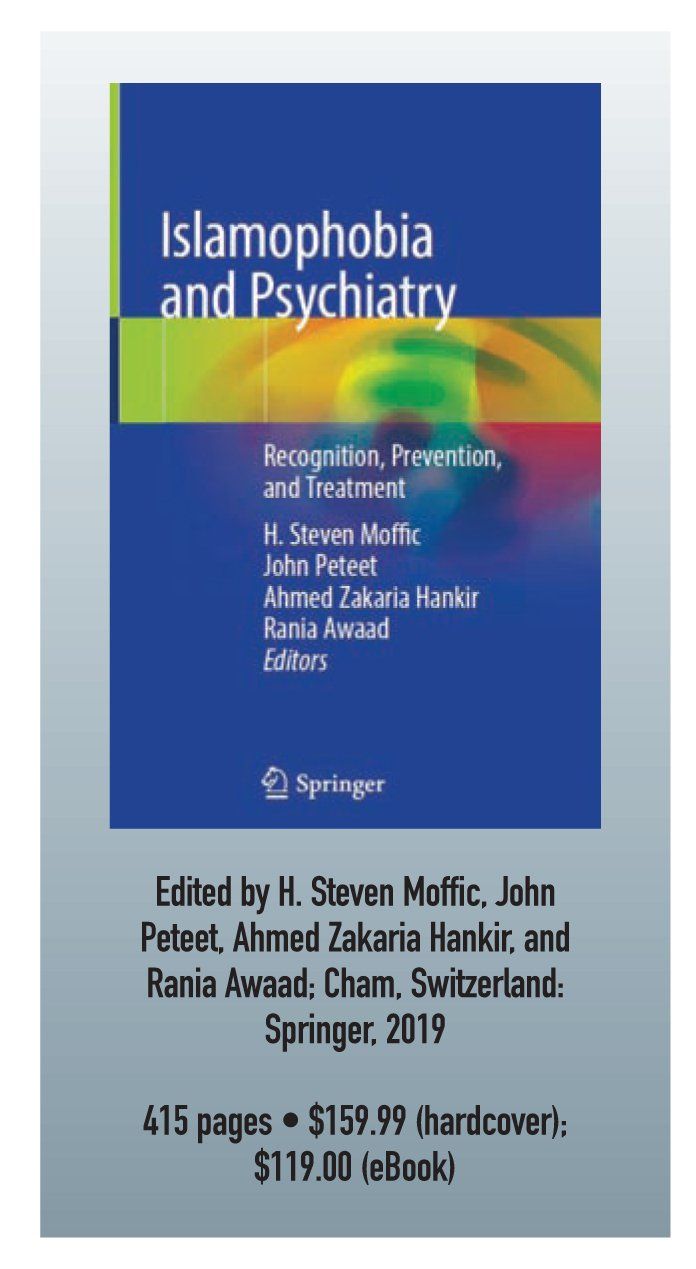 The content of this book surpasses the limits of its title. Its main merit is, perhaps, being the first publication on Islamophobia’s multifaceted nature, an exploration of the historical basis of Islam, the etiopathogenesis of a social disorder, its broad and specific clinical challenges, and its connections with the current political realities of a convulsed world. Four editors and 51 contributors from seven countries (four of them with close Islamic connections) give shape to both an attractive and an intriguing publication.

The book has four sections and 32 chapters. The first section deals with General Issues, covering from historical and conceptual topics to psychological, religious, spiritual, neurobiological, cultural, artistic, and clinical discussions about Islam. Chapter 1 is an extremely informative report on Mental Health in the Islamic Golden Era: The Historical Roots of Modern Psychiatry (622 to 1492 AD), which emphasized a harmonious connection between faith and reason, the preservation of intellectual and mental capacities, independent reasoning, anger as a barrier to sound cognitive judgment, and acceptance of scientific inquiry and Greek, Galenic teachings as the bases of Islamic medicine. The first classification of psychological illnesses was elaborated by the beginning of the 9th Century, and Islamic hospitals are described as “hubs for research, offering apprenticeships for students and disseminating the ‘true science’ of cerebral illnesses.” The balanced clinical and therapeutic management of patients with mental/emotional conditions, the combination of somatic therapies, psychotherapy (with strong behavioral postulates) and social approaches “transcending geographical, cultural, language and religious boundaries” and reflecting a “holistic, culturally adaptive, scientific approach” are, indeed, remarkable features.

Compared with the initial chapter, the second, titled ‘‘Islamophobia: An Introduction to the Academic Field, Methods, and Approaches,’’ shows at times a somewhat militant tone. The Introduction mentions the marginalization of Islam and Muslims in the affairs of Western society and in the curricula of secular universities in the US and Europe. It mentions “unresolved and unaddressed” questions dealing with postcolonial theory and decolonization but already surpassed by the “war on terror” and the resulting worldwide Islamophobic discourses and subsequent discriminatory policies. The chapter elaborates a scholarly history of the term Islamophobia qualifying it, from the beginning, as “imperfect,” and declaring that its validity or accuracy “is a healthy and worthwhile academic exercise”; nevertheless, the chapter does not go further. From its start in the early 20th century, Islamophobia focuses on the notions of rejection, hostility, racism, or otherization born out of the military and political implications of colonialist enterprises. Its entry in the field of public policy accentuated a heated debate without necessarily clarifying its many meanings; thus, we witness today the clashes between an ambitious “Islamophobia industry” and the clarifying and protective attempts of Islamophobia academics.

The Islamophobia Studies field faces as well, a pedagogical challenge: It should not be limited to examining the responses to Islamophobia but should also cover substantial theoretical topics such as the deconstruction of its “five pillars”: state machineries, far right and neoconservative political movements, transnational Zionism, pro-war liberal left, and the new atheist movement. Each one requires analyses and responses that the chapter does not provide. Its central thesis insists on the political considerations supported by “racial stratification, economic power hierarchies and open-ended militarism.” A sort of conspiracy to silence Muslims around the world is described, and “bigotry at every turn” is denounced. Some readers may consider these as rather impassioned pronouncements, and wonder about their effectiveness vis-Ã -vis a rational, realistic, truly pedagogical cultivation of public response. Clearly, multidisciplinary research programs are much needed, not to change fixed mental schemes in some socio-political groups but to prevent a dissemination of their extremist gospels. It is crucial to educate the public and correct wrong perspectives, not to fall into conflict and debate traps nourished by equally extremist-and useless-clichÃ©s.

This reader also liked Chapters 9 on Cultural Literacy, and Chapter 10 on the Psychiatric Cultural Formulation. The former starts with a meritorious attempt at defining the concept of “cultural competence education” in teaching and training programs across the US, and concludes that it is “a finite state, and endpoint.” Instead, cultural literacy emerges as a critical self-and social consciousness, “the first step in developing an orientation toward social justice.” I submit, however, that this attempt is not free of risks: it could encourage stereotyping and diverse reductionisms or generate an endless catalogue of punctual issues. We must assume that cultural literacy clarifies the extent of Islamophobia or similar states, their size and volume: it provides objectivity (the author does not use the word) in an honest context, not a “perfect learning,” a stereotype-sounding definition.

Chapter 10 uses the revised version of DSM-IV’s Outline for Cultural Formulation (OCF) to assist in the clinical assessment and care of Muslim psychiatric patients through the understanding and explaining of Islamophobia’s relevance. One finds strong similarities between the information summarized in the Overall Cultural Assessment subsection, and that observed among, for instance, Hispanic patients (ie, strong use of religious beliefs; fears of stigma; first help-seeking services from nonmental health professionals; reluctance to see mental health professionals, etc.). In fact, we find in the assessment of Islamophobia another reason for a strong cultural training of future psychiatrists and mental health professionals. Diversity among patients demands diversity in service providers and their training.

The impact of acculturation is explored in Chapter 15, Part II (Psychiatric Implications of Islamophobia), devoted to effective ways of working with Muslim psychiatric patients. Clinical concepts such as self-stigma, intergenerational and cross-gender conflicts inside Muslim families, and clergy members’ involvement are well-described. The chapter provides useful views about therapy guidelines, ie, eye contact, working with couples, and distinctions between cultural issues per se and religious beliefs. Like other clinicians, psychiatrists can make mistakes in the cultural assessment of patients’ narratives and their ideas about mental health professionals, and misrepresent habitual Muslim-type responses, reactions, or attitudes as psychopathological manifestations. Specific Clinical Challenges in Part III are useful reminders of these potential situations.

Perhaps the most interesting section of the book is Part IV, devoted to socio-psychiatric implications of Islamophobia. It presents cogent images of Muslim women and youth status, individual and community resilience, and psychological determinants and social impact of violent extremism. The Chapter on Islamophobia and Public Health examines the impact of the disorder on individuals, social relations, and communities at large. It is a comprehensive review that utilizes the socio-ecological model to describe vulnerability and resilience to Islamophobia and its resulting psychosocial problems. In such context, community engagement strategies, “a bottom-up approach,” seeks and finds self-sustainability, growing social support, and overall positive results. Rich and transparent principles will have to face, however, strong logistic demands: providing community members with the opportunity to advocate for their needs and participate in the design of sensitive interventions is easier said than done. Experience shows that critics of this approach will quickly label these efforts as “socialist” infiltrations, and conservative sectors may very well impede the provision of financial and human resources. Yet, it describes encouraging results from several ongoing projects in California. Whether this can reach other parts of the country and the world where Islamophobia and related conditions (fed by authoritarianism, oppression, rejection, demagoguery, and/or hatred) dominate, remains a challenging reality.

In short, this book represents a laudable initial effort to study a social phenomenon of somberly complex characteristics. It is multidisciplinary and, as such, recognizes the strong bio-psycho-socio-cultural-spiritual basis of Islamophobia. It presents a solid historical background about Islam, analyzes the different doctrine-based perspectives on the psychological/mental nature of Islamophobia, exhibits artistic illustrations, and succeeds in describing clinical outcomes. Among its few setbacks one can mention is a mild trend toward conceptual repetitiousness, some lack of precision in diagnostic and therapeutic proposals, some theoretical excesses and polemic political pronouncements, and a small number of editing typos. The 20 items listed in the Editors’ Conclusions, however, show concrete evidence of a job well done.