Remember to keep the cart behind the horse while practicing medicine.

The privilege of practicing medicine is accompanied by immense responsibilities. Medicine is an imperfect profession, as all human professions and actions are imperfect, and our current treatments are the result of hundreds of years of trial and error that inherently produce results that are at times spectacularly successful or eventually reveal pain and suffering. Antibiotics come to mind as a paradigm-changing benefit to the treatment of infectious diseases. Anesthesia modernized surgery with dramatic benefits for the patient. However, some of our treatments, although initially believed to be safe and effective, ultimately were found to cause significant harm in some patients (Table 1). 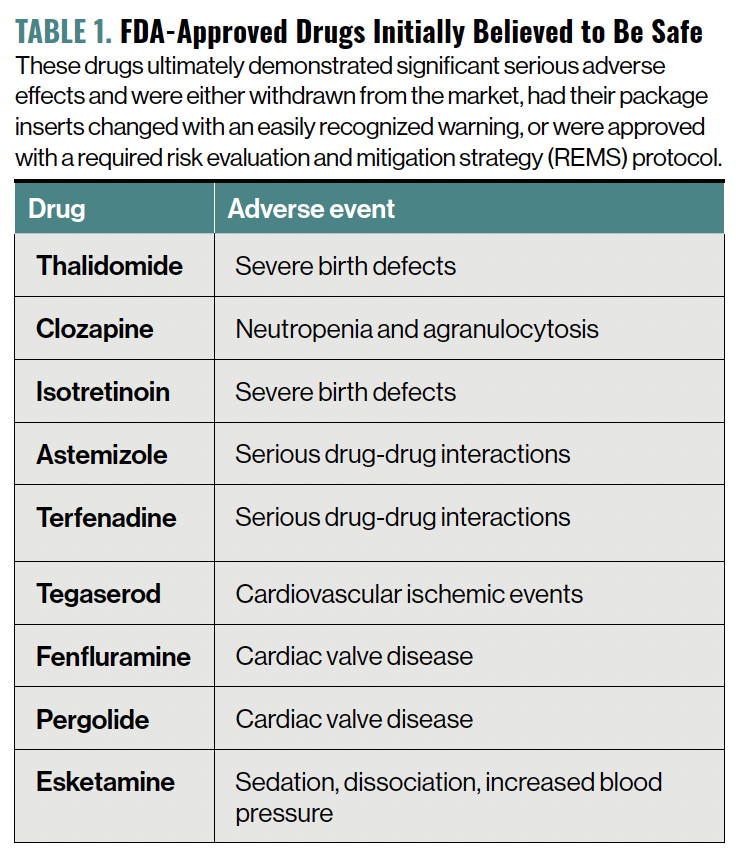 To maximize positive clinical outcomes and minimize harm, we as health care providers undergo rigorous medical education and supervision, which culminates in a license to practice. Practice is indeed the correct verb in medicine, as we never perfect our learning and clinical acumen. Medicine is a constant work in progress, with some established dogmas of the past falling by the wayside as our understanding forges ahead with new discoveries and treatments. As such, it is our responsibility to educate and reeducate ourselves about our armamentarium of medications, especially when considering their therapeutic worth. As the opioid crisis has taught us, this is imperative when recommending or prescribing drugs with an abuse potential.

Over the past several years, psilocybin, 3,4-methylenedioxymethamphetamine (MDMA), and esketamine/ketamine have become common topics of conversation throughout the United States in a casual manner that lacks the context needed to understand their current or possible future role in routine psychiatric practice. Without the guardrails of evidence-based medical research, submission for US Food and Drug Administration (FDA) approval, and (if approved) Drug Enforcement Administration (DEA) scheduling, these drugs have the potential to cause significant harm. Equally important, medical professionals must become educated about their established clinical benefits before these guardrails have been implemented. Only then can an ethical discussion about their potential benefits, risks, and adverse effects occur without a clinician’s personal biases intruding and contaminating a patient’s understanding.

There is nothing special or unique about ketamine, psilocybin, or MDMA. The diversion, misuse, and abuse of drugs has been interwoven in all cultures throughout the history of medicine. In fact, all 3 agents were established drugs of abuse during my training in medical school and residency, although the more common drugs of abuse (both then and now) include alcohol, cannabis (various percentages of tetrahydrocannabinol/cannabidiol [THC/CBD]), tobacco products, methylphenidate, dextroamphetamine, cocaine, and heroin (Table 2).

In many instances, drugs that are now regulated by the DEA as controlled substances, or that have been deemed illegal and classified as Schedule I, were once readily available from numerous sources. Cocaine and opium are 2 classic examples. Cocaine, a Schedule II drug, is actually legal to prescribe in an emergency department setting. Opium served as the progenitor to the vast array of µ-opioid receptor agonizing analgesics that became the backbone for pain management until recently. (Interestingly, the alarm is due to overprescribing, unintentional addiction resulting from opioid tolerance, and a rapidly escalating US death rate from accidental opioid overdose.) So where does that leave us in terms of psilocybin, MDMA, and esketamine/ketamine? And how do they measure up against other drugs of abuse? 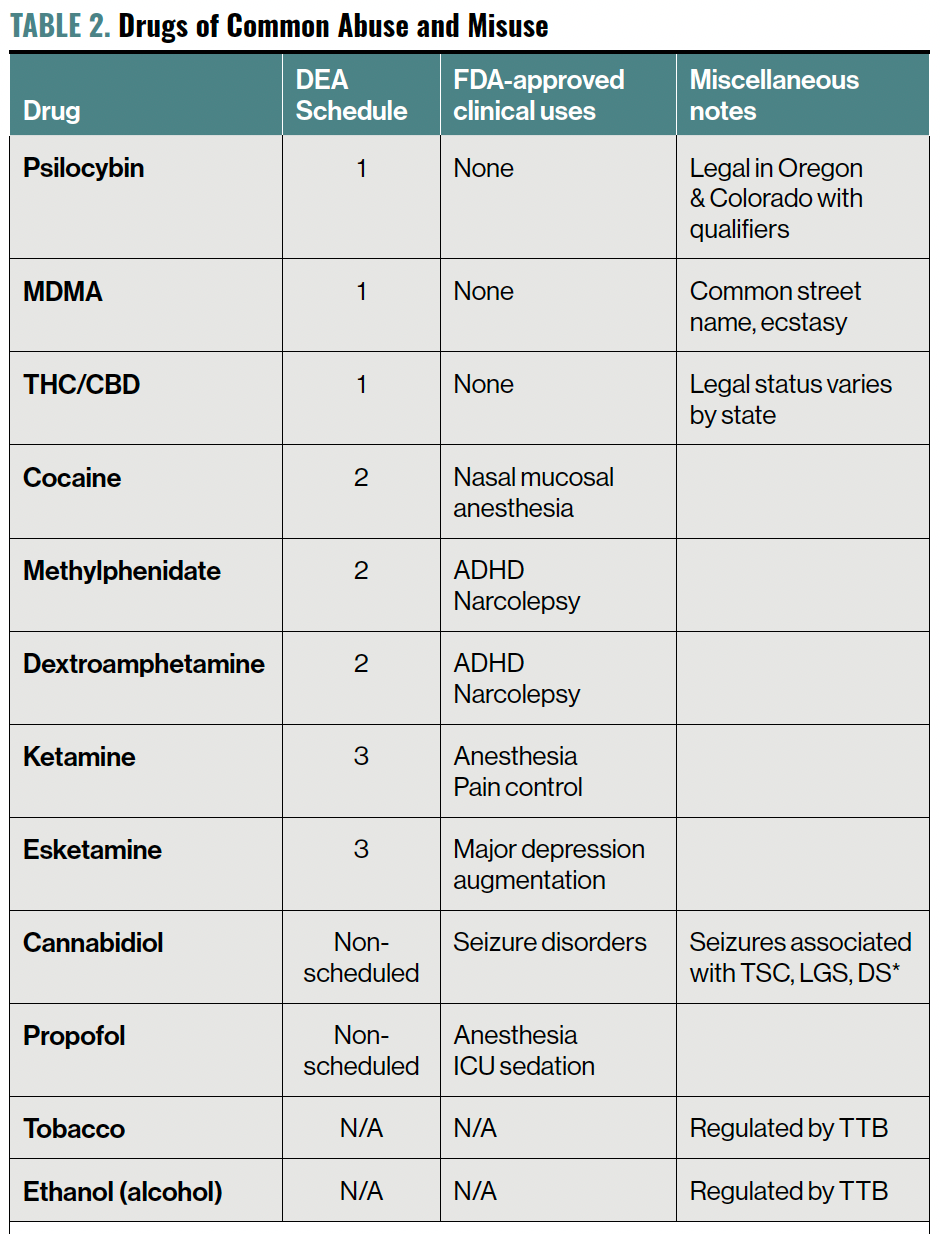 All drugs are not dispensed and administered by health care professionals. Two of the drugs with the highest contributions to mortality in the United States are regulated by the US Department of the Treasury’s Alcohol and Tobacco Tax and Trade Bureau: alcohol and tobacco. Alcohol, one of the oldest and most commonly used and abused drugs in the world, made headlines recently in a JAMA article that concluded that amongst adults in the United States aged 20 to 64 years, a whopping 1 in 8 deaths were attributable to excessive alcohol use from 2015 to 2019.1

Our goal, thus, should be to help prevent and address the abuse of these 2 drugs among our patients.

Intranasal esketamine—1 of the 2 active isomers of ketamine—was FDA approved for use in treatment-resistant depression in the United States in 2019. The evidence-based medical guidelines for the use of esketamine are well established, and my colleagues who administer this treatment report significant efficacy in some patients who had previously failed trials of other established treatments for depression. Regrettably, this specific and highly regulated FDA approval of esketamine served as a green light to many clinicians and nonclinicians alike to administer ketamine in a range of settings with lax protocols that are not evidence based and will likely result in harm to patients. (See my October 2022 editorial, in which I explored this issue in depth.2)

Psilocybin is undergoing phase 3 clinical trials for treatment-resistant depression and is being studied for a wide range of disorders in various phases of development, with approximately 72 clinical trials currently registered with the FDA.3 As of today, psilocybin, currently a Schedule I drug, has no role in clinical medicine outside of these trials. Due to the media’s coverage of ongoing investigational registration trials, there is a misperception throughout the United States that psilocybin can treat depression, with a large array of therapists offering their services to oversee patients’ psilocybin experiences. As licensed medical practitioners, we are obliged to educate our patients—and the greater society—that there is no current role for psilocybin in clinical medicine. We must await the completion and FDA evaluation of the phase 3 clinical trials, as is the case for any other drug seeking FDA approval for use.

Furthermore, the clinical trials with psilocybin involve comprehensive treatment protocols that are as integral a part of the treatment intervention as the psilocybin itself. As with any medical treatment, these investigational trials will determine the precise dose of psilocybin, the age range for use, accompanying elements of the treatment (such as having a treatment-specific trained health care provider present), type of treatment setting required, contraindications, dosing frequency, length of treatment, and risks/benefits/adverse effects.

Findings from a recently completed phase 2 double-blind trial of psilocybin for treatment-resistant depression demonstrated a potential complex treatment protocol.4 Study participants were outpatients experiencing a depressive episode who met criteria for treatment-resistant depression, with documentation of nonresponse to 2 to 4 adequate antidepressant trials. The individuals were randomized in a double-blind ratio of 1:1:1 to receive psilocybin doses of 25 mg, 10 mg, or 1 mg (control group). During a 3– to 6–week run, all antidepressants were tapered and discontinued by 2 weeks before the actual trial began. This time included at least 3 sessions with a therapist for psychoeducation, preparation for the psychedelic experience, and to build trust.

On day 1, the participants received their randomized dose of psilocybin and spent 6 to 8 hours in a calm and nonclinical treatment room, wearing eyeshades, and listening to a specific music playlist in the presence of the lead therapist and an assistant therapist. Two integration sessions occurred with the same therapist on days 2 and 7. The study participants were followed and evaluated for 12 weeks after their single dose of psilocybin. The primary outcome was change from baseline (the day before receiving the psilocybin) to week 3 in the Montgomery-Asberg Depression Rating Scale (MADRS) score. The 25 mg but not the 10 mg dose demonstrated a significant improvement in MADRS score compared with the 1 mg dose at 3 weeks.

Based on the robust outcomes in phase 2 and 3 studies, it is likely that MDMA will be submitted for FDA approval for posttraumatic stress disorder (PTSD) before psilocybin is submitted for FDA approval for treatment-resistant depression. In the phase 3 study, participants with severe PTSD with significant comorbidities received 3 doses of MDMA or placebo in combination with manualized therapy, followed by 9 integrative therapy sessions, over 18 weeks. The MDMA-treated group demonstrated “a significant and robust attenuation of PTSD symptoms and functional impairment as assessed using the CAPS-5 [Clinician-Administered PTSD Scale for DSM-5] and SDS [Severity of Dependence Scale], respectively.”5-7

Currently, psilocybin and MDMA are both Schedule I drugs in the United States, making them illegal and characterized by the Controlled Substances Act as having “no currently accepted medical use and a high potential for abuse”—qualities that ongoing preclinical studies are calling into question. Despite this, both drugs have been granted breakthrough therapy designation by the FDA. The Schedule I status creates a huge obstacle for researchers and serves to significantly slow down potential advances in research. On November 17, 2022, US Senators Cory Booker (D-NJ) and Rand Paul (R-KY) introduced the Breakthrough Therapies Act, which would allow the DEA to reclassify a Schedule I drug as Schedule II if the drug was granted breakthrough therapy designation status by the FDA based on established preclinical research.8

As health care providers, we must refrain from non–evidence-based treatment, especially when it involves Schedule I drugs. Cannabis, MDMA, and psilocybin all fall into this category. COVID-19 created treatment access challenges that resulted in the DEA temporarily loosening previously necessary regulations to allow the continued prescribing of controlled substances. Sadly, opportunists slipped through and created organized and extensive “clinical” websites providing easy access to psychostimulants (Schedule II drugs) for presumed ADHD, as well as numerous “at-home ketamine” (Schedule III drug) treatments for whatever ails you. It is time for the DEA to reinstate its pre–COVID-19 regulations. This will plug 1 dangerous hole in the leaking dam.

Understandably, there is a lot of excitement from clinicians and patients alike about the possibility of future FDA approval of MDMA-assisted therapy for severe PTSD and psilocybin protocols for treatment-resistant depression—2 diagnostic categories with a huge unmet need for novel and improved treatments. Most competent and ethical health care providers would not recommend their patient have ethanol-assisted or tobacco-assisted treatment for their PTSD or depression, despite these drugs being legal and nonscheduled by the DEA. For clinicians who work in a state where cannabis is legal, I would not recommend THC-assisted therapy. As competent and reproducible clinical research data accumulate on the possible psychiatric applications for psilocybin and MDMA, we must nurture our patience.

Reflecting on a good piece of advice, let’s keep the cart behind the horse.