What is the actual risk of suicide attempts or suicide death in people with bipolar disorder? How does a BD diagnosis affect short-term and long-term suicide risk? How should a BD diagnosis help guide us toward the most effective suicide prevention strategies? 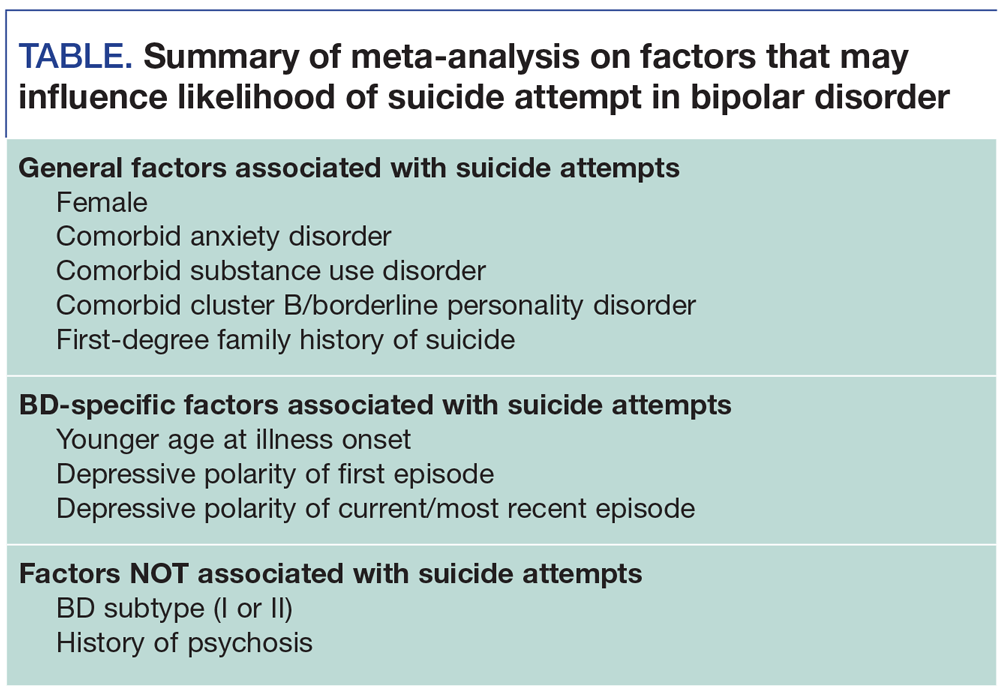 TABLE. Summary of meta-analysis on factors that may influence likelihood of suicide attempt in bipolar disorder

There is widespread international consensus that improved understanding of suicide risk and suicide prevention is a key health care priority. While the tragedy of suicide is certainly not unique to bipolar disorder (BD), people with this condition have among the highest rates of suicide attempts and suicide deaths. This raises a number of important questions for clinicians involved in the care of patients with BD:

1) What is the actual risk of suicide attempts or suicide death in people with BD?

2) How does a BD diagnosis affect our understanding of a specific person’s short-term and long-term risk of suicide?

3) How should a BD diagnosis help guide us toward the most effective suicide prevention strategies for our patients?

The International Society for Bipolar Disorders (ISBD) is a leading academic society, with members in more than 50 countries (www.isbd.org). The ISBD Task Force on Suicide was created as a vehicle for international collaboration, with the goals of summarizing the literature in this important area and providing a frame for the clinical questions posed above.

Question 1: What is the actual risk of suicide attempts or suicide death in people with BD?

The ratio of suicide attempts to suicide deaths is approximately half that found in the general population: it is estimated at 13:1 to 16:1 among those with BD. This may be because persons with BD engage in suicidal behavior with higher intent and lethality. Self-poisoning has generally been found to be the most common method used in suicide attempts, especially in non-Asian countries. Hanging, self-poisoning, and jumping account for the large majority of suicide deaths around the world. The exception is the US, where gunshot wounds also account for a significant proportion of BD suicide deaths.

A pooled analysis published by the ISBD task force found the overall suicide death rate among people with BD to be 164 per 100,000 person-years.1 As a comparison, the CDC-estimated suicide rate in the US population is 13 per 100,000 person-years.2 The rate of suicide among people with BD is therefore at least 10-fold greater than in the general population in most countries. It is also estimated that 3% to 10% of all suicide deaths occur in people with BD, far outstripping the 1% to 2% overall lifetime prevalence of the condition.

The rate of suicide varies considerably during a person’s life, likely based on a variety of personal and clinical factors. A longitudinal study from Denmark estimated that over the course of more than 30 years, 7.8% of men with BD and 4.8% of women with BD will eventually die of suicide.3 These striking data reinforce the importance of focusing on suicide prevention within the clinical management of BD.

Question 2: How does a BD diagnosis affect our understanding of a specific person’s short-term and long-term risk of suicide?

Late one evening, 33-year-old Maria is brought to the emergency department (ED) by her friends. She had an argument with her boyfriend, drank too much alcohol, wrote an angry suicide note, and impulsively ingested 20 antihistamine pills. She endorses a recurrent history of depression and ongoing struggles with her academic load since her recent return to college. She had a recent hospitalization at another hospital for increasing depressive symptoms with suicidal ideation; venlafaxine, 150 mg qd, had been prescribed in addition to her usual treatment with quetiapine, 400 mg qhs. Since starting venlafaxine she has been more irritable and agitated. Racing thoughts at night are leading to insomnia.

A review of her clinical records identifies a 10-year history of BD type I. She had her first episode of depression at age 17, for which she was treated with paroxetine for a short period. Her first manic episode was associated with psychotic symptoms and resulted in a hospitalization. There has been no return of psychosis and no hospitalizations or ED visits until recently. She was treated with divalproex sodium for 7 years but switched to quetiapine when she began to consider getting pregnant. She endorses a history of suicide in her father and states, “I don’t want to end up like him.”

Does the presence of the BD diagnosis change your clinical management? If yes, then what clinical information is important to estimate Maria’s short-term and long-term risk of suicide?

The ISBD task force completed a systematic review and series of meta-analyses that examined the presence and strength of factors that were potentially associated with suicide attempts or deaths in BD populations. The meta-analyses were limited to the factors for which there were sufficient data to analyze. These analyses identified several relevant factors (Table).

Numerous other putatively important factors could not be included in the meta-analyses because of the insufficient number of studies. We did, however, find specific studies that identified numerous additional factors associated with suicide attempts and deaths, including but not limited to age, mixed states, first-degree family history of mood disorders, prior suicide attempts, and recent interpersonal stressors.8

With this in mind, we can return to the question of “if” and “how” does a diagnosis of BD affect suicide risk assessments? In our view, the answer is a resounding “yes.” Not only are there strong data that BD is associated with a relatively high rate of suicide attempts and deaths, but we also have evidence that general and BD-specific correlates of suicide attempts and deaths are important to consider. We propose a model to capture this perspective (Figure).

Question 3. How should a BD diagnosis help guide us toward the most effective suicide prevention strategies for our patients?

Management of suicide risk is an important goal of psychiatric care. General suicide prevention strategies have been widely reviewed and serve as the foundation for effective management of suicide risk among patients and across communities. Community-based measures such as public education, crisis lines, means restriction, media reporting guidelines, and gateway training are critical, especially for those outside the mental health care system.

While overall management of psychiatric symptoms must certainly play a central role in the clinical management of suicide risk, there are specific issues within BD that are worth considering. These include high-risk periods, prescribing of lithium, and use of other treatments.

High-risk periods. During or soon after a psychiatric hospitalization has consistently been shown to be a high-risk time for suicide: roughly 30% to 40% of BD suicides occur during this period.9 This is especially notable after a first psychiatric admission and/or for patients under age 30, with standardized mortality ratios that range from 43 to 60 times greater than the general population.10,11 These striking findings suggest that the utmost importance should be placed on developing and implementing suicide prevention strategies for those patients around the time of hospitalization.

While the body of evidence is still incomplete, strategies such as written safety plans, brief psychological interventions for suicidal ideation, skills training, means restrictions, and others can be implemented in inpatient and post-hospitalization settings (see http://www.sprc.org/bpr for an excellent list of resources). Future refinement of these strategies for a BD patient population is certainly warranted.

Lithium. The overall effect of treatment of BD on reducing rates of suicide attempts or deaths is unequivocal. The challenge for clinicians lies in identifying which specific treatment approaches will be most effective for each patient.

The role of lithium as a potential anti-suicide treatment has been extensively examined in the literature and debated by clinicians. The ISBD task force carefully examined the extant data to attempt to draw the most appropriate conclusions. First, patients with BD who are receiving lithium are at lower risk for suicide attempts and deaths than patients who are receiving placebo. Second, lithium discontinuation has been consistently associated with higher rates of suicide attempts and deaths. Third, data from large naturalistic treatment databases showed that patients who receive lithium are at lower risk for suicide attempts or deaths than patients who receive other pharmacotherapies.14

What remains uncertain, however, is how to interpret the prospective clinical trial data. With the exception of a small dataset that compared lithium with carbamazepine, clinical trial data do not clearly show an advantage of lithium over other mood stabilizer medications with respect to suicide prevention. A significant caveat is that the available data either were not designed for this question or were limited by insufficiently powered studies. At the end of the day, suicide is still thankfully a rare outcome over shorter periods. We are therefore left with uncertainty about the most appropriate interpretation of the literature. Can it be stated that lithium has an anti-suicide effect? The answer to this appears to be “yes.” Can it be stated that lithium has an anti-suicide effect that is greater than that of other guideline-concordant care for BD? That answer remains uncertain.

Other pharmacotherapies. Even less is known about other medications and risk of suicide attempts and deaths in patients with BD. In 2009, the FDA released a warning related to increased risk of suicidal thoughts or actions in patients who received anticonvulsant medications15; a series of studies followed. A meta-analysis of studies that focused on mental illness populations did not find evidence to support the warning.16 Similarly, long-term observational data in BD samples did not support any evidence of increased risk; in fact, there is some indication that continued treatment with anticonvulsants is associated with a significant reduction in risk of suicide, comparable to that of lithium.17

In summary, there is no clear evidence that specific pharmacotherapeutic strategies have a clear advantage over others in reducing suicide risk. All successful treatments may be able to assume the mantle of having an “anti-suicide effect,” with lithium clearly in the lead in terms of the wealth of data in this area.

Suicide risk assessments and prevention approaches can be daunting. The complexity is great, the path is not always clear, and the implications are profound. This is especially true in the context of a patient with BD. A key goal of the ISBD Task Force on Suicide was to summarize and interpret the large literature in this area-and to provide clinically useful information for clinicians who care for patients with BD. We hope this summary serves to inform the point where evidence and clinical judgment meet.

Dr. Schaffer is Chair, International Society for Bipolar Disorders (ISBD) Task Force on Suicide, and Vice President Education, ISBD. Dr. Sanchez De Carmona is President, International Society for Bipolar Disorders. Dr. Schaffer reports that he is on the Speakers Bureau for Asofarma, Lundbeck, and Sunovion. Dr. Sanchez De Carmona reports that he has no conflicts of interest concerning the subject matter of this article.

15. US Food and Drug Administration. Suicidal Behavior and Ideation and Antiepileptic Drugs. May 5, 2009. http://www.fda.gov/Drugs/DrugSafety/PostmarketDrugSafetyInformationforPatientsandProviders/ucm100190.htm. Accessed July 8, 2016.