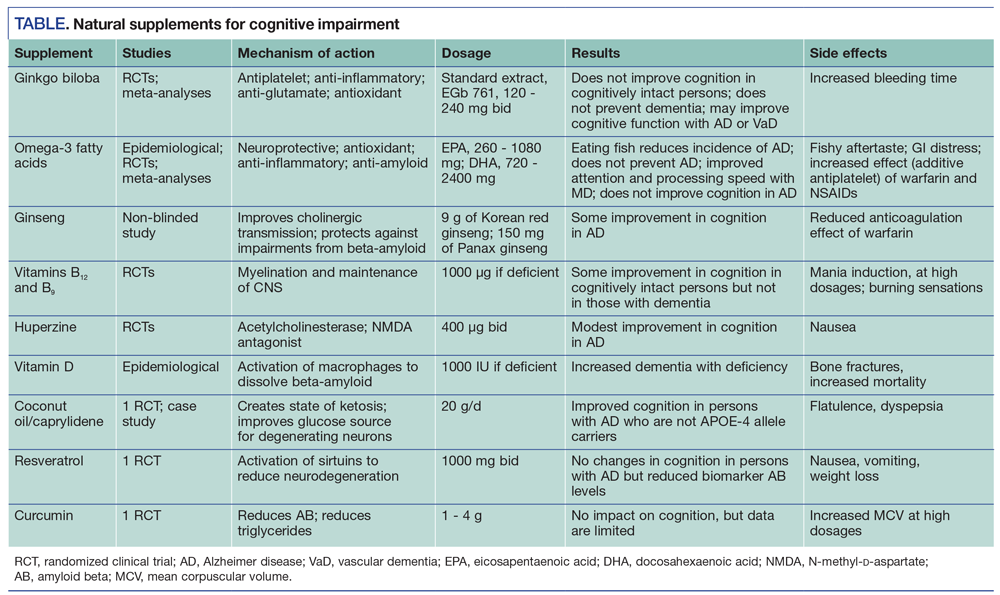 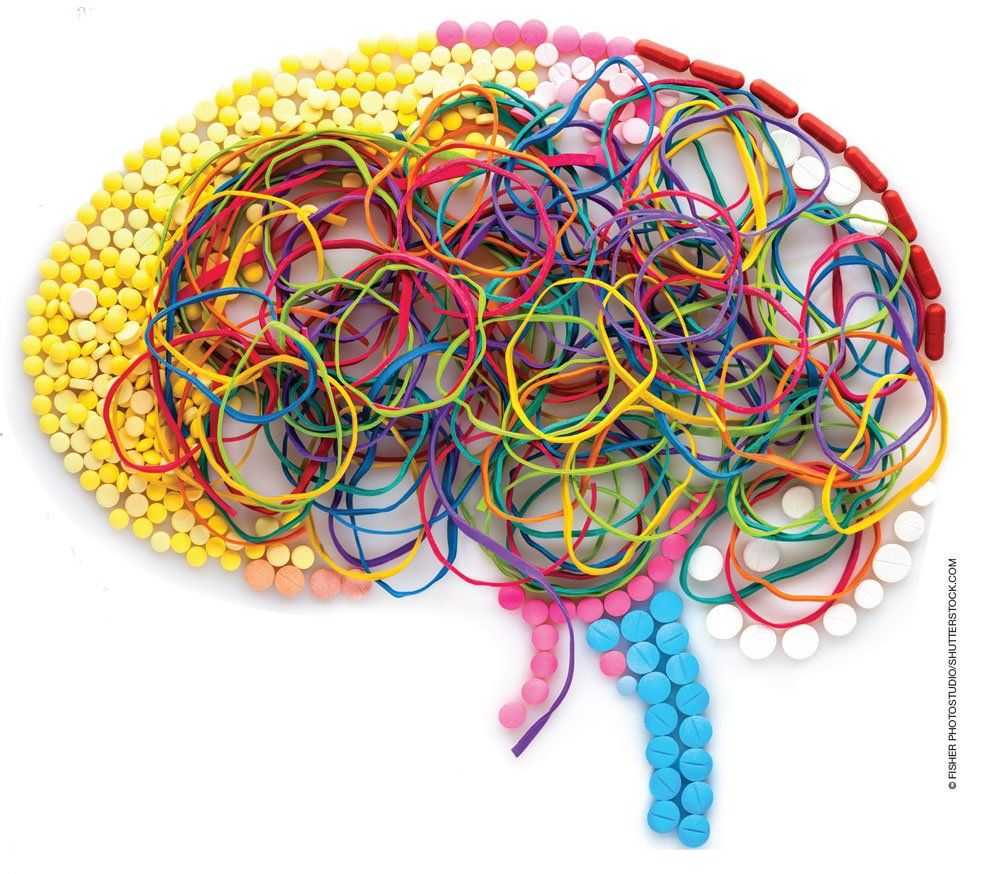 Dementia, also referred to as major neurocognitive disorder (including Alzheimer disease [AD]), is a growing problem because of increased lifespan. There is no known cure. Several drugs are FDA-approved for the treatment of dementia, including acetylcholinesterase inhibitors (eg, donepezil, rivastigmine, galantamine) and an N-methyl-D-aspartate (NMDA) receptor antagonist, but these have limited efficacy, adverse effects, and significant cost-all of which contribute to the search for alternative therapies to improve cognition.

In this article, we look at several natural products used to improve cognitive impairment or cognitive symptoms of dementia (Table).

A popular supplement for cognition is ginkgo biloba, which is extracted from the leaf of the Maidenhair tree. Although it has been used as a supplement in the US, in many European countries it is part of mainstream medical care and requires a prescription. A standardized extract called EGb 761 is prescribed in many countries outside of the US.

reduce the excitotoxic effects of glutamate. Finally, the flavonoids serve as antioxidants that reduce the damage caused by free radicals.

The majority of trials that show the benefits of ginkgo biloba pertain to improved cognition in persons who already have a major neurocognitive disorder or dementia. However, the data regarding a benefit in cognitively intact individuals are mixed. The most rigorous study by Mix and Crews2 examined the effect of a 180-mg dose of ginkgo biloba on community-dwelling individuals without neurocognitive disorders. Full neuropsychological testing showed some small improvements in memory, but intergroup differences limited the results. The dosage was lower than typically recommended, which is generally about 120 mg to 240 mg, 2 or 3 times daily. Another randomized clinical trial (RCT), which used a 240-mg dose of ginkgo biloba, demonstrated some small effects in immediate and delayed recall.3 In summary, there is no compelling evidence to support the use of ginkgo biloba to improve memory functioning in individuals who are cognitively intact.

Another study looked at the prevention of AD in adults aged 72 to 96 years with either normal cognition or mild cognitive impairment.5 The study used EGb 761 (a ginkgo biloba extract) at a dosage of 120 mg twice daily over the course of 6 years. No risk reduction was found.

The GuidAge study looked at the prevention of dementia with ginkgo biloba in more than 2000 community-dwelling older adults over a 5-year period.6 Like the GEM study, the GuidAge study did not show a benefit of ginkgo biloba in preventing dementia over 4 years; however, after 5 years, it started to show an improvement. A limitation of the GuidAge study is the especially low incidence of dementia in the participant population (1.2/100 to 1.4/100), which makes it more difficult to show statistical significance. The large, 20-year PAQUID study showed that ginkgo biloba prevented dementia. However, important characteristics such as dosage and duration of ginkgo treatment were not documented.7

These studies include both epidemiological studies as well as RCTs, which make it difficult to compare findings. Epidemiological studies do not control for confounding variables, such as comorbid risk factors that might contribute to the development of dementia. Moreover, there is insufficient evidence to support the use of ginkgo biloba in the prevention of dementia. Studies that focus on dosage and duration of ginkgo biloba administration are needed to remove the potential confounding effects.

A smaller but more recent meta-analysis demonstrated a potential benefit of ginkgo biloba on cognition in those who already had cognitive impairment.9 The standard mean difference calculated between ginkgo biloba and placebo was -0.89 (95% confidence interval, -1.82 to 0.04), and there was a statistically significant but not necessarily clinically significant benefit on Alzheimer Disease Assessment Scale-cognitive (ADAS-cog) scores of 2.65. Significant improvement in cognitive functioning in outpatients with mild to moderate AD or vascular dementia occurred with 240 mg of EGb 761.10 In addition, ginkgo biloba has an antidepressant effect in patients with dementia.11 Other studies have shown that ginkgo biloba was not inferior to donepezil and may provide added benefit when both are given to individuals with AD.12,13

Ginkgo biloba must be used with caution in patients who are at increased risk for hemorrhage because it may potentiate bleeding. However, studies of its effect on bleeding function found ginkgo biloba to be safe alone and in combination with antiplatelet drugs.14,15 Persons who are most likely to benefit from ginkgo biloba include those who already have dementia.

The APOE-4 allele is a genetic predisposition for the development of AD. Individuals who have this genetic susceptibility to AD do not appear to benefit in the same way from omega-3 fatty acid supplementation as do individuals without the APOE-4 allele. Older adults who seek to prevent AD might benefit from a diet rich in omega-3 fatty acids, including fish; whereas older adults who already have mild cognitive impairment might benefit from omega-3 fatty acid supplementation to improve attention and memory.

Omega-3 fatty acid supplements, primarily EPA, also provide an antidepressant effect.23 Thus, it is possible that supplementation for the purpose of cognitive impairment might have unforeseen benefits on mood. Similarly, the confounding effect of omega-3 fatty acids might be improved cognition with the improvement of depression, since depression in geriatric patients often adversely affects cognition.

Ginseng may have cognitive-enhancing effects. In a study that compared Korean red ginseng with placebo, significant improvement was seen in ADAS-cog scores in participants who received 9 g of ginseng.24 Another study used 150 mg of Panax ginseng as well as other cognitive-enhancing agents, including 120 mg of ginkgo biloba and royal jelly.25 Statistically significant improvement in cognitive function was observed, as measured by about 2 points on the Mini-Mental State Examination (MMSE); however, such improvement is not always considered clinically significant.

Huperzine A is a bioactive constituent of Huperzia serrata, which has been suggested to have cognitive-enhancing effects. Huperzine has several mechanisms of action similar to those of traditional cognitive-enhancing medications, such as acetyl cholinesterase inhibitors, and the antagonistic effects on the NMDA receptor. The common dose range is from 200 to 400 µg.

Deficiencies in cyanocobalamin (vitamin B12) and folate (vitamin B9) can cause cognitive impairment. Therefore, it is standard practice to evaluate levels of these vitamins in anyone who presents with cognitive impairment.28 Low levels of vitamin B12, as evidenced by elevations in methylmalonate and homocysteine, are related to deficiencies in memory and decreases in perceptual speed and brain volume.29

Vitamins B12 and B9 may have a cognitive-enhancing effect in persons with normal cognition. Therapeutic benefits on immediate and delayed recall were observed with vitamin B supplementation in adults aged 60 to 74 years.32 Although there is insufficient evidence to show the benefit of vitamin B supplementation on cognition in persons with dementia and normal vitamin B levels, the data suggest some benefit in cognitively intact individuals. Adverse effects include induction of mania and burning sensations.

Vitamin D stimulates macrophage-induced phagocytosis of beta-amyloid protein.33 In a population study of 171 individuals, an increased incidence of all-cause dementia was seen in those who had vitamin D deficiency compared with those who had normal levels.34

Coconut oil is a medium-chain fatty acid that is more easily digested than saturated fatty acids identified as long-chain fatty acids.38 There is limited evidence to support the use of coconut oil for AD. Most of the evidence comes from the Newport Story, which consists of robust effects in a case study of a male with AD.39

Coconut oil is hypothesized to have numerous beneficial effects, which might indirectly reduce the risk of AD. Several mechanisms may be implicated, including its antioxidant effect; moreover, coconut oil reduces accumulation of beta-amyloid and lowers insulin resistance and low-density lipoprotein cholesterol.38

There is more evidence to support caprylidene (Axona), which is a derivative of coconut oil and consists of medium-chain fatty acids. The theory behind caprylidene is based on hypometabolism of glucose in the brains of patients with AD. Caprylidene creates a state of ketosis that provides an alternative energy source for the neurons.40 Patients with mild to moderate AD who received caprylidene showed an average improvement in ADAS-cog scores of 1.533 points after 45 days. It is important to note that this improvement was observed only in those who were non–APOE-4 allele carriers and that many of the individuals were taking cognitive-enhancing medications (acetylcholinesterase inhibitors or memantine) as well as caprylidene.

Coconut oil and its derivative caprylidene have limited adverse effects. The most common include gastrointestinal effects, such as diarrhea, flatulence, and dyspepsia.

Although there is insufficient evidence to recommend either resveratrol or curcumin in preventing or treating cognitive impairment, the 2 supplements hold promise in improving cognition. A phase 2 RCT with resveratrol did not demonstrate significant changes in cognition as measured by MMSE or ADAS, but it did show an increase in cerebrospinal fluid levels of amyloid beta, a biomarker of AD.41

There have also been some positive results with curcumin. A study by Baum and collegues42 showed good tolerability but did not detect a cognitive-enhancing effect. In cognitively intact individuals, curcumin reduced triglyceride levels as well as plasma beta-amyloid levels.43

Multiple agents are marketed for cognitive impairment; however, few have compelling evidence to recommend their use in vulnerable populations. More data are needed to better understand these potential treatments for cognitive impairment. Ideally, larger, better-designed studies with multiple dosing would benefit our understanding as well as studies that help identify the specific mechanism of action of the various complementary and alternative medicines.

Dr. Varteresian is MH Psychiatrist, Los Angeles County Department of Mental Health, and Assistant Clinical Professor (volunteer) at the University of California, Irvine. Dr. Lavretsky is Professor of Psychiatry at the University of California, Los Angeles (UCLA) and Director of the Late-Life Mood, Stress, and Wellness Research Program at the Semel Institute for Neuroscience and Human Behavior, Geffen School of Medicine at UCLA. Dr. Varteresian reports no conflicts of interest concerning the subject matter of this article; Dr. Lavretsky reports that she is a recipient of grants from Forest Research Institute/Actavis and the NICCIN and NIMH.