Neuroticism-Depression: What Is It and Does It Play a Role in College Drinking?

Are people with high "neuroticism-depression" likely to drink more than the average person when stressed? We may be getting closer to the answer. 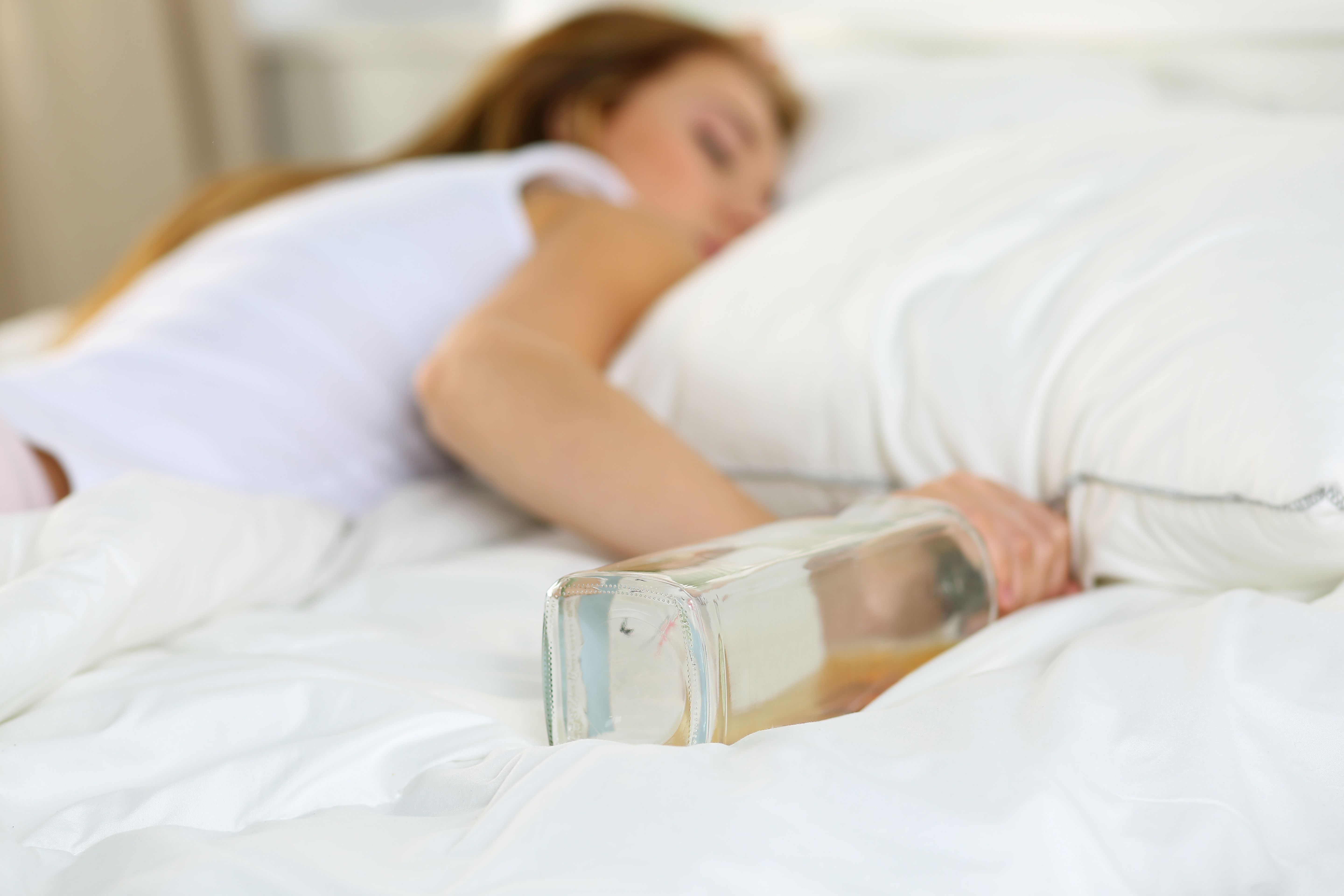 According to national surveys, half of full time college students aged 18 to 22 consumed alcohol this past month, and 33% of them engaged in binge drinking during this same time frame.1 Binge drinking is defined as consumption of 5 or more standard drinks on 1 occasion for males, or 4 or more for females, bringing blood alcohol concentration to 0.08 grams of alcohol per deciliter or higher.2 These drinking patterns lead to serious health and safety risks, including death from unintentional injuries such as motor vehicle crashes,3 sexual assault,4 suicide attempts and other mental health issues, legal charges, and, over the long term, damage to the liver and other organs.

Academic performance is also compromised, with 1 in 4 students endorsing academic difficulties (ie, missing class or falling behind on assignments) due to alcohol consumption.5 Those who binge drink are more likely to perform poorly on tests or projects compared to those who drink but do not binge (40% vs 7%) and 5 times more likely to have missed a class.6 Additionally, although not all who drink develop an addiction, consumption and especially binge drinking patterns are certainly preludes to developing an addiction, with approximately 9% of college students meeting criteria for alcohol use disorder.7 Lack of screening may also underestimate the magnitude of the problem.8

Although most students arrive to college having already had some experience with alcohol, the first few weeks of freshman year are often a period of heavy drinking and alcohol-related consequences. Social pressures and expectations during new-found independence, widespread availability and access to alcohol, an unstructured schedule with mounting academic pressure, and lack of parental interactions all play a role. Alongside these stressors, many students have pre-existing personality traits that may account for the use and misuse of alcohol during college.

One of the “Big Five” higher order personality traits, neuroticism, defined by high emotional instability, depressed mood, low frustration tolerance, and anxiety, has been found to positively predict alcohol consumption,9-11 as well as being a predictor of alcohol use.12 As it pertains to the college population, only 1 previous study of 200 students evaluated the implications of personality types and found high neuroticism and low conscientiousness predicted more alcohol use and related problems.13

In the study analyzed in this journal club, Martin and colleagues14 aim to better understand the role of personality and neuroticism in college alcohol use/misuse among freshman, above and beyond the reported levels of stress. The starting hypothesis revolves around the notion that negative affect faces of neuroticism, and primarily depression, are more strongly associated with alcohol use and misuse than stress when accounting for other personality domains.

Question. Do personality traits and neuroticism in particular predict alcohol use and misuse in matriculating college freshmen above and beyond reported levels of stress?

Type of study. Cross-sectional outpatient Institutional Review Board, an approved study with survey data collected from participants during the first 8 weeks of their first college semester.

Population. 211 female and 90 male matriculating college freshmen with an average age of 18.58 years (SD =0.39) from 2 campuses of a private university in the Southeastern United States, spanning both urban and rural areas.

Method. Participants were recruited from the 2 campuses of a private university (urban n=193; rural n =110) at the start of the first semester through fliers posted around campus and during frequent in-person undergraduate events. They were administered an online survey of behavioral and health questionnaires, in addition to several cognitive assessments. Most surveys were completed within 3 weeks of the study start, and participants received a $15 gift card for completion. The Alcohol, Smoking and Substance Involvement Screening Test (ASSIST) and the Alcohol Use Disorders Identification Test (AUDIT) were used to assess alcohol use and misuse (Table). 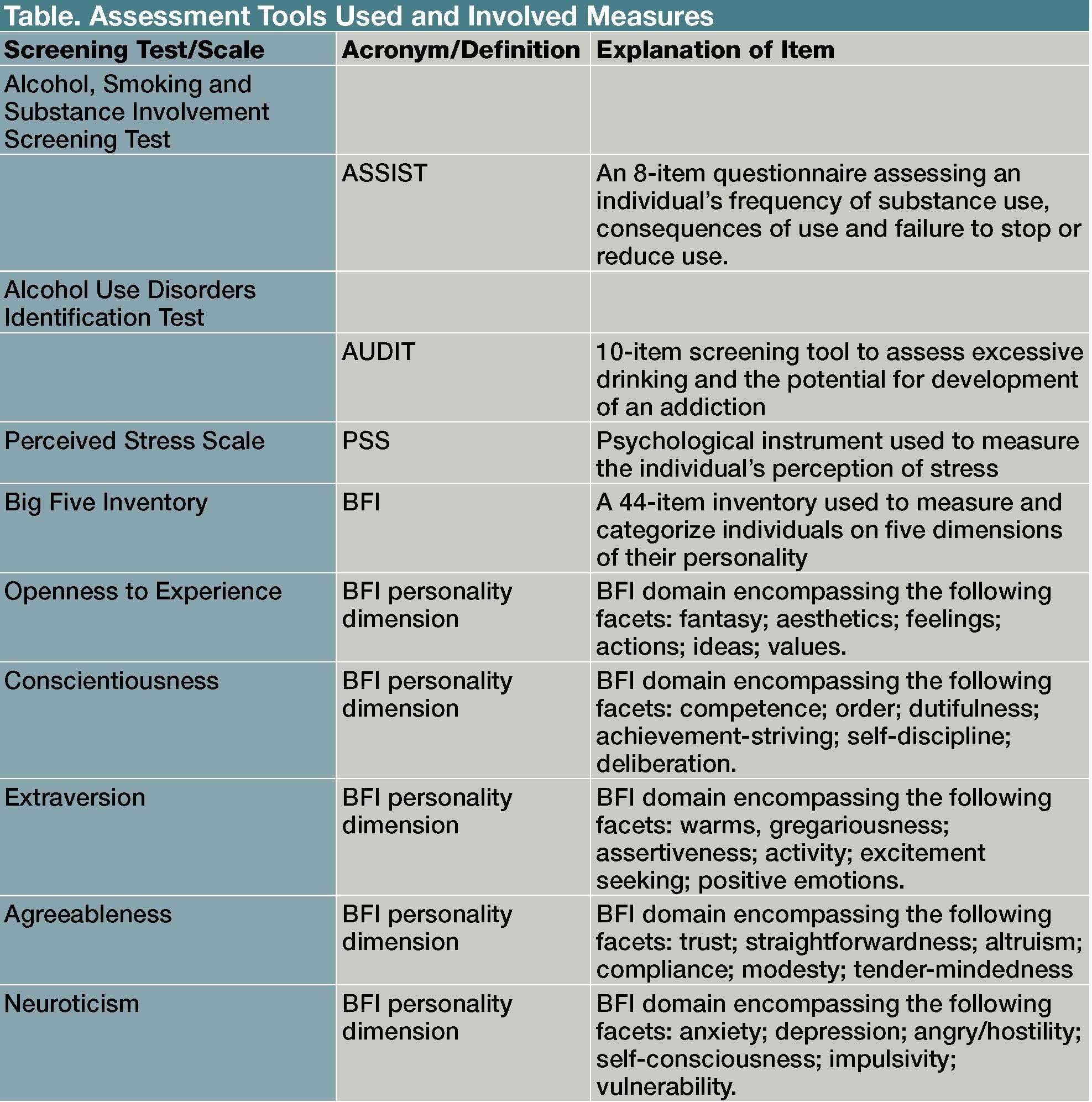 Endorsement of use 1 or more times on the ASSIST prompted the administration of the AUDIT, a 10-item questionnaire with a maximum score of 40, where the higher scores indicate more severe and hazardous, harmful, excessive alcohol use/misuse. Stress was assessed using the Perceived Stress Scale (PSS), a 14-item self-reported measure of stress with each stress symptom scored on a 4-point Likert scale, where 0 =never and 4=very often (maximum score of 56). Personality was assessed using the 44-item version of the Big Five Inventory (BFI), which measures 5 dimensions of personality (openness to experience, conscientiousness, extraversion, agreeableness, and neuroticism).

Ten facet traits were also calculated to assess more specific personality characterization within the 5 domains: for openness, aesthetics, and ideas; conscientiousness, order, and self-discipline; for extraversion, assertiveness, and activity; agreeableness, altruism, and compliance; and for neuroticism, anxiety, and depression.

Data Analysis: All analyses controlled for campus site (rural versus urban), sex, and individual week of study enrollment (as school obligations as potential stressors fluctuated between study weeks). The researchers examined partial correlations between predictions while controlling for covariates. They used multiple regression analysis to examine the conditional and joint effect of personality and stress on alcohol use and misuse.

Results. Of the sample, 54% (or 164 individuals) endorsed use of alcohol at least once in their lifetime. Descriptive statistics of all covariates were accounted for, and across covariates sex and week of study enrollment were only modestly associated with AUDIT scores (male gender and more weeks since college commencement somewhat associated with higher AUDIT scores), while site of the campus was not. Despite this, a t-test concluded that there were no gender differences between alcohol use and misuse (t(161) =-1.89, P=.06). Among partial correlations, the participants’ AUDIT scoreswere positively correlated with PSS scores (r= .17, P= .003) and neuroticism (r=.31, P< .001), and negatively correlated with agreeableness (r = −.12, P = .031). Stress was significantly correlated with all the personality domain scores except for openness to experience.

Regression analyses provided less biased estimates of personality and stress on AUDIT. To elucidate the relationship between neuroticism, stress, and alcohol use and misuse (given the discrepancy between the partial correlation results and the multiple regression model), the neuroticism facets were explored as outcome measures. Analyses that used the neuroticism facets(depression or anxiety) in place of the neuroticism domain found that neuroticism-depression was positively associated with higher AUDIT scores when accounting for PSS and domain-level Big Five personality traits (β=.23, P=.028; Adjusted R2=.11, F (10, 146) =2.90, P=.002). 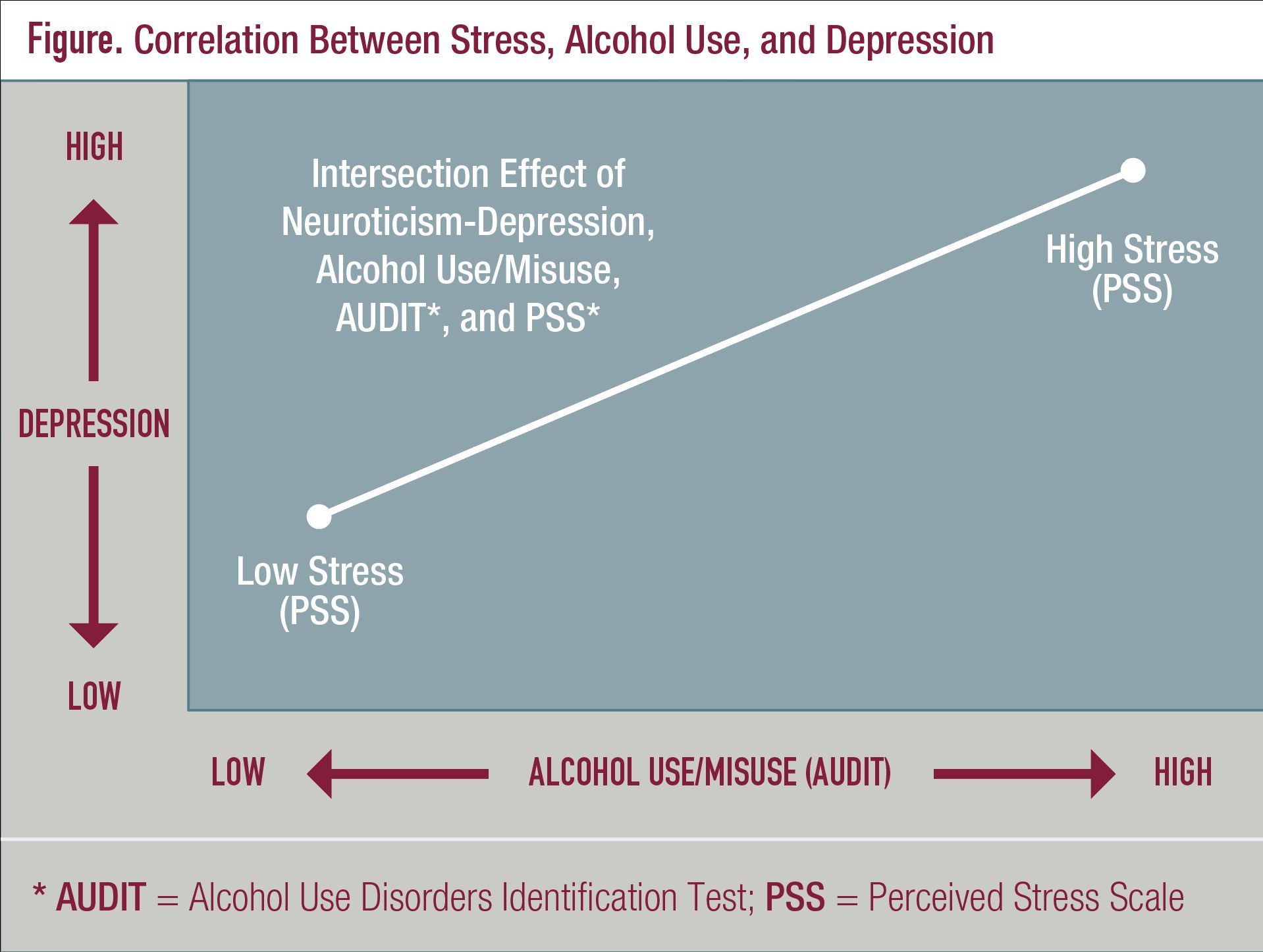 Figure. Correlation Between Stress, Alcohol Use, and Depression

This study tested an interesting hypothesis: do personality traits—and neuroticism in particular—predict alcohol use and misuse in matriculating freshmen above and beyond reported levels of stress?

Investigators branched off previous studies exploring the roles of personality or stress on college drinking. They analyzed survey results data from Wave I of the MAPme Project, a longitudinal study of biobehavioral health and substance use during college. The findings showed that personality characteristics and stress play a significant role in the severity of problematic alcohol use and misuse, but that certain traits are more significantly associated with alcohol involvement than others. The neuroticism-depression facet was a better predictor of alcohol use and misuse than the neuroticism domain, and this facet accounted for unique variance even when controlling for stress and other personality facets and domains. Stress did not account for unique variance in harmful and hazardous alcohol use and misuse beyond personality traits.

1. When presented with highly stressful circumstances, individuals’ high neuroticism-depression predicts propensity to use and misuse alcohol.

3. The BFI domains and faces seem to have a role in alcohol use/misuse, above stress levels. These could be used as screeners for population risk indicators among incoming freshmen.

1. This study was conducted using a primarily Caucasian group from a private university located in the Southeast US. Findings may not generalize to other diverse individuals with varied socioeconomic statuses. Although it encompassed both urban and rural participants, they were located in the same part of the country.

2. Overall, looking at the big picture, there was a fairly low numbers of reported alcohol use among the sample to confidently generalize findings.

3. The study included a greater proportion of women compared to men, which may have skewed the baseline starting characteristics and outcomes.

5. The authors used a single-domain,hear self-reported assessment of stress, associated with increased likelihood of response bias and social desirability bias. More comprehensive and objective measures of stress levels might include physiological assessment, such as skin conductivity, hear trate, or cortisol measures that have shown be strongly associated with perceived stress.

6. Here the authors used the AUDIT-Total score, which confounds alcohol consumption and problematic alcohol use behaviors. As they note, while the study participants reported low alcohol use and misuse behaviors and were not well prepared to detect unique effects of these constructs, future research could expand on the present study by examining alcohol consumption and problems separately.

7. This study is limited by its cross-sectional design. To best examine the relationship between stress and personality on alcohol use and misuse, future studies could take a longitudinal state-trait perspective, treating personality and neuroticism specifically as stable traits and stress as a state. Data from this sample will continue to be collected until the students graduate, allowing longitudinal examinations into alcohol use and misuse trajectories, and the associations between stress, personality traits, and hazardous and harmful alcohol use.

Dr Stanciu is assistant professor of psychiatry at Dartmouth’s Geisel School of Medicine and Director of Addiction Services at New Hampshire Hospital, Concord, NH. He is Addiction Section Editor for Psychiatric TimesTM. The author reports no conflicts of interest concerning the subject matter of this article.

1. US Department of Health and Human Services. Center for Behavioral Statistics and Quality, Substance Abuse and Mental Health Services Administration. 2019 National Survey on Drug Use and Health. Table 6.21B—Types of Illicit Drug, Tobacco Product, and Alcohol Use in Past Month among Persons Aged 18 to 22, by College Enrollment Status and Gender: Percentages, 2018 and 2019. Accessed February 5, 2021. https://www.samhsa.gov/data/sites/default/files/reports/rpt29394/NSDUHDetailedTabs2019/NSDUHDetTabsSect6pe2019.htm#tab6-21b

7. US Department of Health and Human Services. Center for Behavioral Statistics and Quality, Substance Abuse and Mental Health Services Administration. 2019 National Survey on Drug Use and Health. Table 6.23B—Alcohol Use Disorder in Past Year among Persons Aged 18 to 22, by College Enrollment Status and Demographic Characteristics: Percentages, 2018 and 2019. Accessed February 5, 2021. https://www.samhsa.gov/data/sites/default/files/reports/rpt29394/NSDUHDetailedTabs2019/NSDUHDetTabsSect6pe2019.htm#tab6-23b