Obama, the Oil Spill, and the Magic of Righteous Anger

Many Americans seem angry at President Obama’s seeming lack of anger over the BP fiasco. Frustration with the environmental calamity in the Gulf is perfectly understandable. Anger with those who should have foreseen and prevented this horrendous situation is also understandable, and-up to a point-quite justifiable. 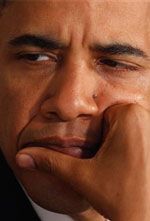 Gloria Borger,1 CNN’s senior political analyst, wrote in a recent commentary that President Obama was elected because “he is cool, calm and analytical.” She continues:

But now the disaster in the Gulf has made many of us want to see someone else-with plenty of anger, emotion and bravado. We want him to yell at BP. We want him to loudly tell us he’s whipping the cleanup effort into shape.1

I suspect that Borger is right-many Americans seem angry at President Obama’s seeming lack of anger over the BP fiasco. Now, to be sure: frustration with the environmental calamity in the Gulf is perfectly understandable. Anger with those who should have foreseen and prevented this horrendous situation is also understandable, and-up to a point-quite justifiable.

What is more difficult to understand-and more psychologically complex-is the conviction that getting angry is somehow a “good thing” in a leader, and that the (apparent) absence of anger betokens someone who is “out of touch” or insensitive to the moral dimensions of the problem at hand. Of course, I have no idea what President Obama is actually feeling about the environmental catastrophe caused by the oil spill-presidential aides imply that he is, indeed, angry about it. But apparently the President is just not angry enough to placate some of his very, very angry critics. They would probably be satisfied with nothing less than steam rushing out of those famous ears, or perhaps a few presidential profanities directed against BP. Evidently, the “Plug the damn hole!” comment attributed to the President did not do the job.

But as mental health professionals, should we encourage this thirst for righteous anger? Does anger really do much good in a situation such as the present debacle in the Gulf? Is anger a useful problem-solving strategy? Or, in general, does anger tend to make things worse?

The father of rational emotive behavioral therapy, the late Albert Ellis, PhD, was quite clear about the futility of blowing your stack-or your blow-out preventer. He and colleague Robert A. Harper observed:

If you make yourself-yes, make yourself-terribly upset and unhappy about your frustrations, you will almost invariably block yourself from effectively removing them. The more time and energy you expend in lamenting your sorry fate, ranting against your frustrations, and gnashing your teeth in despair, the less effective action you will be able to take. . . . Even if you are correct in your surmise that it is unfair and unethical for others to block your wishes, so what? So it is unfair and unethical. . . .2(p113)

But Ellis did not intend to encourage passive acceptance of injustice or evil-doing. He and Harper continue:

When conditions are not the way you would prefer them to be, calmly and determinedly try to change them for the better; and when, for the moment, they cannot be changed, the only sane thing to do is quietly to accept them (and wait and plan for the time when they finally can be changed).2(p186)

As psychologist Ren J. Muller, PhD, has noted in Psychiatric Times, citing the work of Jean-Paul Sartre and other existential philosophers, there is a “magical” dimension to intense anger: it transforms the world from one in which the person feels helpless and impotent into one in which the person has the illusion of power and control.3 It is as if to say, “If I get angry enough, the laws of physics won’t apply-I’ll be able to plug that damn oil leak through the power of my righteous indignation!” Of course, this is a kind of self-induced trance state that changes nothing except the person’s ability to make rational decisions.

Anger is dealt with somewhat ambivalently in the rabbinical tradition. The Vilna Gaon (Elijah ben Shlomo Zalman, 1720-1797) believed that anger “must be totally eradicated, as it has almost no redeeming value.”4(p213) But the word “almost” is important here. The great physician and philosopher, Maimonides, in his masterwork, the Mishneh Torah, describes anger as “an exceedingly bad passion, and one should avoid it to the last extreme.”5 And yet, even Maimonides noted the occasional value of simulating anger, as when one wants to discipline one’s children-so long as one “does not really feel” anger.5 Notably, the Talmud does not admonish us, “Never get angry!” Rather, we are instructed to be “slow to anger,” and are told, “Do not anger easily” (Pirke Avot 2:15).

So what is the most adaptive attitude toward anger? And has President Obama managed to achieve this, with respect to the oil leak in the Gulf? On the second question, I will leave the reader to form the final judgment. But on the first question, I find myself in agreement with Aristotle, in his Nicomachean Ethics:

[A person] is praised for being angry under the right circumstances and with the right people, and also in the right manner, at the right time, and for the right length of time. . . . For being gentle means to be unruffled and not to be driven by emotion, but to be angry only under such circumstances and for as long a time as reason may bid.6(pp100-101)

Borger G. We got the president we elected. CNN Opinion.

A Guide to Rational Living.