So, you think you have a pretty good handle on DSM-5—what the lay press loves to call, quite misleadingly, “Psychiatry’s Bible”? OK, maybe you know most of the criteria for the major categories of serious mental illness. No doubt, you are aware of serious problems with some aspects of DSM-5 (the Manual), including the limited reliability and validity of many of its disorder categories.2 But how well do you understand the “deep structure” of DSM-5 as a diagnostic tool?

Just to get your adrenaline flowing, try taking this 2-minute quiz:

Which of the following statements regarding DSM-5 is/are true?

Critics of psychiatric diagnosis often caricaturize the DSM process as the “Chinese Menu” approach. Thus, a professor of history and philosophy—in an article titled, “Forget talking, just fill a script: how modern psychiatry lost its mind”—wrote:

In clinical practice, DSM-III led to a “Chinese menu” approach to psychiatric diagnosis: a specific mental illness can be diagnosed if a sufficient number of boxes can be ticked. This is only of limited value in clinical practice.3

Indeed, merely checking off boxes of symptoms (and signs) is of very limited clinical value—but that is not at all what DSM-5 calls for. As my colleague, Dr Mark Ruffalo, and I pointed out, the DSM-5 makes it crystal clear: Simply checking off symptoms cannot and does not constitute a psychiatric diagnosis—which requires a comprehensive case formulation.4 As the Manual itself notes:

The case formulation for any given patient must involve a careful clinical history and concise summary of the social, psychological and biological factors that may have contributed to developing a given mental disorder. Hence, it is not sufficient to simply check off the symptoms of the diagnostic criteria to make a mental disorder diagnosis (emphasis added).5(p19)

As Dr Gary G. Gintner has explained, the case formulation “. . . is a core clinical skill that links assessment information and treatment planning. It is a hypothesis about the mechanisms that cause and maintain the problem. It answers the question, ‘Why is this person, having this type of problem, now?’”6

In principle, the case formulation—and by extension, the final DSM diagnosis—requires medical knowledge, or at least access to medical consultation, in order to assess the “biological factors” that may have contributed to the patient’s problem. Finally, we should note that, in addition to meeting sign/symptom criteria for a mental disorder, virtually all the major DSM-5 categories require evidence of “clinically significant distress or impairment in social, occupational or other important areas of functioning.” You cannot snag a DSM diagnosis merely by collecting a group of signs and symptoms. There must also be adverse consequences in the person’s life.

The DSM-5 Is “Biomedical”? Not So Much

It is clear from the aforementioned description of the case formulation that the DSM-5 explicitly uses a “biopsychosocial” approach to diagnosis. In addition, DSM-5 has extensive coverage of cultural issues, as they impinge on differential diagnosis. Excellent examples of the “case conceptualization” using a bio-psychosocial-cultural approach may be found in the text by Sperry and Sperry.7

Nonetheless, some commentators—mainly critics of psychiatric nosology—have asserted that DSM-5 represents the “biomedical” model. For example, 1 paper argues that,

The Diagnostic and Statistical Manual of Mental Disorders . . . offers a biomedical framing of people’s experiences of distress and impairment, and despite decades of criticism, it remains the dominant approach.8

These authors go on to argue that, “. . . a biomedical construction of ‘mental illness’ all too frequently fails to protect individuals from delegitimation and stigma.” That is a provocative claim worth examining but is beyond the scope of this essay. What is striking about the paper by these 2 psychologists is that the term “biomedical” is never fully defined. The authors do note the biomedical model is oriented “around the problems of the body . . . such as genetics or neurochemistry.”8

If we take that rough formulation as a guide, it can be readily seen that—with a few exceptions—there is very little in DSM-5 that invokes “genetics” or “neurochemistry.” True, DSM-5’s discussion of Huntington disease does reference abnormalities on chromosome 4; and other neurocognitive disorders, such as Lewy body disease, are linked to genetic abnormalities. But such references to specific genetic abnormalities are by far the exception, particularly for the more classically “psychiatric” disorders, such as schizophrenia and bipolar disorders. (We do find, under the rubric of “Risk and Prognostic Factors,” the statement that “Schizophrenia and bipolar disorder likely share a genetic origin . . .”5 but that is about as far as the Manual goes). 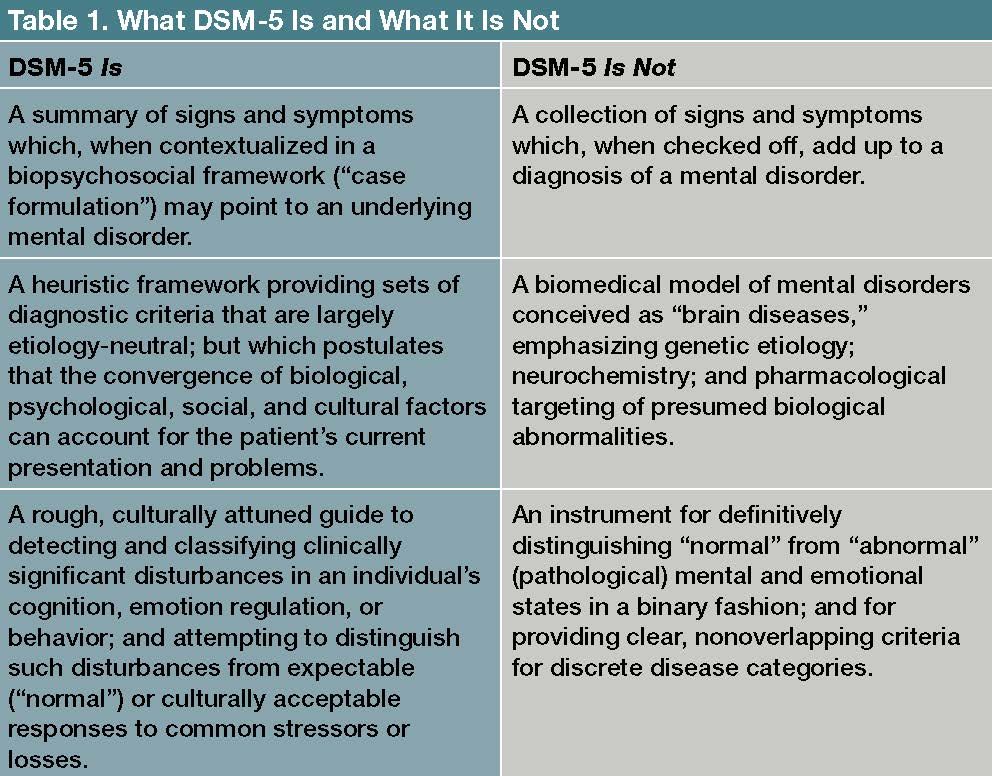 As far as I know, discussion of “neurochemistry” as a causal or etiological factor in any of the common psychiatric disorders is entirely lacking in DSM-5. (So much for “chemical imbalances”). With only a few exceptions, DSM-5 avoids commitments regarding etiology. Indeed, the Manual explicitly notes, “a diagnosis does not carry any necessary implications regarding the etiology or causes of the individual’s mental disorder. . .”5(p25) One can see this as a serious deficiency in the DSM-5—but one cannot claim the Manual endorses anything resembling neurochemical etiologies or “chemical imbalances” for the major mental disorders.

In sum, there is no credible basis for arguing that the DSM-5 “offers a biomedical framing of people’s experiences of distress and impairment.”8 Deacon, in a detailed review and critique, argues that “The biomedical model posits that mental disorders are brain diseases and emphasizes pharmacological treatment to target presumed biological abnormalities.”9 I do not contest that description, but nothing in Deacon’s analysis shows that DSM-5 is essentially “biomedical” in the sense he explicates.

Another common claim is that DSM-5 is a strictly “categorical” framework that conceptualizes mental illness as a collection of discrete, diagnostically separable entities. As one paper puts it, “. . . the DSM-5 is a categorical system. Thus, individual disorders are regarded as discrete units—“you either have it, or you don't.”10 A related claim is that DSM-5 posits a clear and distinct separation between mental abnormality and “normal” mental or psychological states.

In truth, neither claim is supported in the DSM-5 (Table 1). On the contrary, the Introduction to the Manual clearly states,

The results of numerous studies of comorbidity and disease transmission . . . make strong arguments for what many astute clinicians have long observed: the boundaries between many disorder “categories” are more fluid over the life course than DSM-IV recognized, and many symptoms assigned to a single disorder may occur, at varying levels of severity, in many other disorders. These findings mean that DSM . . . should accommodate ways to introduce dimensional approaches to mental disorders, including dimensions that cut across categories . . . Although some mental disorders may have well-defined boundaries around symptom clusters, scientific evidence now places many, if not most, disorders on a spectrum with closely related disorders that have shared symptoms, shared genetic and environmental risk factors, and possibly shared neural substates . . . In short, we have come to recognize that the boundaries between disorders are more porous than originally believed.” (Italics added)5(pp5-6)

Furthermore, the DSM-5 does not argue for a hard and fast boundary between “normal” and “abnormal” states and conditions. On the contrary, it states:

The boundaries between normality and pathology vary across cultures for specific types of behaviors…Hence, the level at which an experience becomes problematic or pathological will differ. The judgment that a given behavior is abnormal and requires clinical attention depends on cultural norms that are internalized by the individual and applied by others around them, including family members and clinicians.5 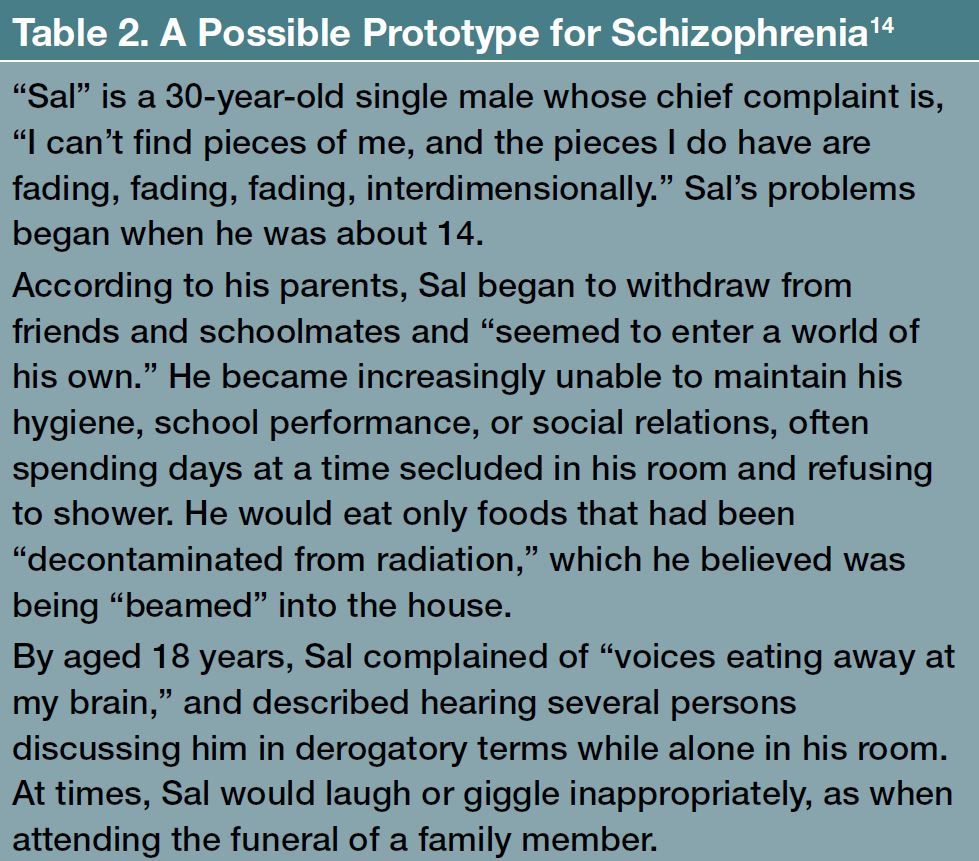 Table 2. A Possible Prototype for Schizophrenia14

All this is not to say that psychiatric illnesses are merely “socially constructed” labels that have no corresponding physical or pathological referents in “the real world”—a thorny topic for another time.11 DSM-5 merely affirms what all good clinicians know: There are many gray areas in the realm of psychopathology, often influenced by culture; and it is very doubtful that we can “carve Nature at its joints.”12

Winston Churchill once quipped that democracy is the very worst form of government, except for all the others that have been tried.13 It is tempting to suggest, tongue slightly in cheek, that DSM-5 is by far the worst diagnostic framework psychiatry could have chosen—except for all the rest. To be sure, many different approaches to psychiatric diagnosis have been proposed and debated—each with its pros and cons.14

Personally, I favor a prototype-based diagnostic approach for every-day clinical work; and a parallel set of “research diagnostic criteria” for investigative purposes (Table 2). “Prototype” diagnosis refers to the use of idealized models or archetypes of disease, rather than either “categorical” or “dimensional” methods of classification. Phillips and colleagues14 discuss and debate various diagnostic models in a wide-ranging colloquium.

It seems very clear that diagnosis is, and will always remain, a necessary part of clinical care, both in general medicine and psychiatry. When a patient presents with the complaint, “I hear threatening voices in my head,” we simply must diagnose—a word whose etymology means, “knowing the difference between.” For example, we must know the difference between “threatening voices” stemming from combat-related trauma, on the one hand, versus schizophrenia or anti-NMDA receptor encephalitis15 on the other. Otherwise, our treatment is likely to be misguided.

No, whatever the lay press claims, DSM-5 is not “The Bible of psychiatry.’ It is not a sacred, eternal, and inviolable text, or even a very sophisticated diagnostic tool. John Talbott, MD, professor emeritus of psychiatry and former president of the American Psychiatric Association, has cautioned, “If you let the specifics of the DSM tie you down, it prevents you from practicing the art of medicine. So, I would hope people would not be bound by it, but be flexible and use their clinical judgment instead.”16

I agree. But before we use the DSM-5’s text to line our bird cages—as a renowned British psychiatrist I once met described the utility of the DSM-III—we should at least understand what DSM-5 does, and does not, represent.

Let us hear from you! Share comments with your colleagues by emailing PTEditor@mmhgroup.com. Comments may be shared online pending review and editing for style.

9. Deacon BJ. The biomedical model of mental disorder: a critical analysis of its validity, utility, and effects on psychotherapy research. Clin Psychol Rev. 2013;33(7):846-861.