Neuropsychiatric manifestations of Huntington disease can present decades before the motor symptoms become apparent, making the role of the psychiatrist all the more important. 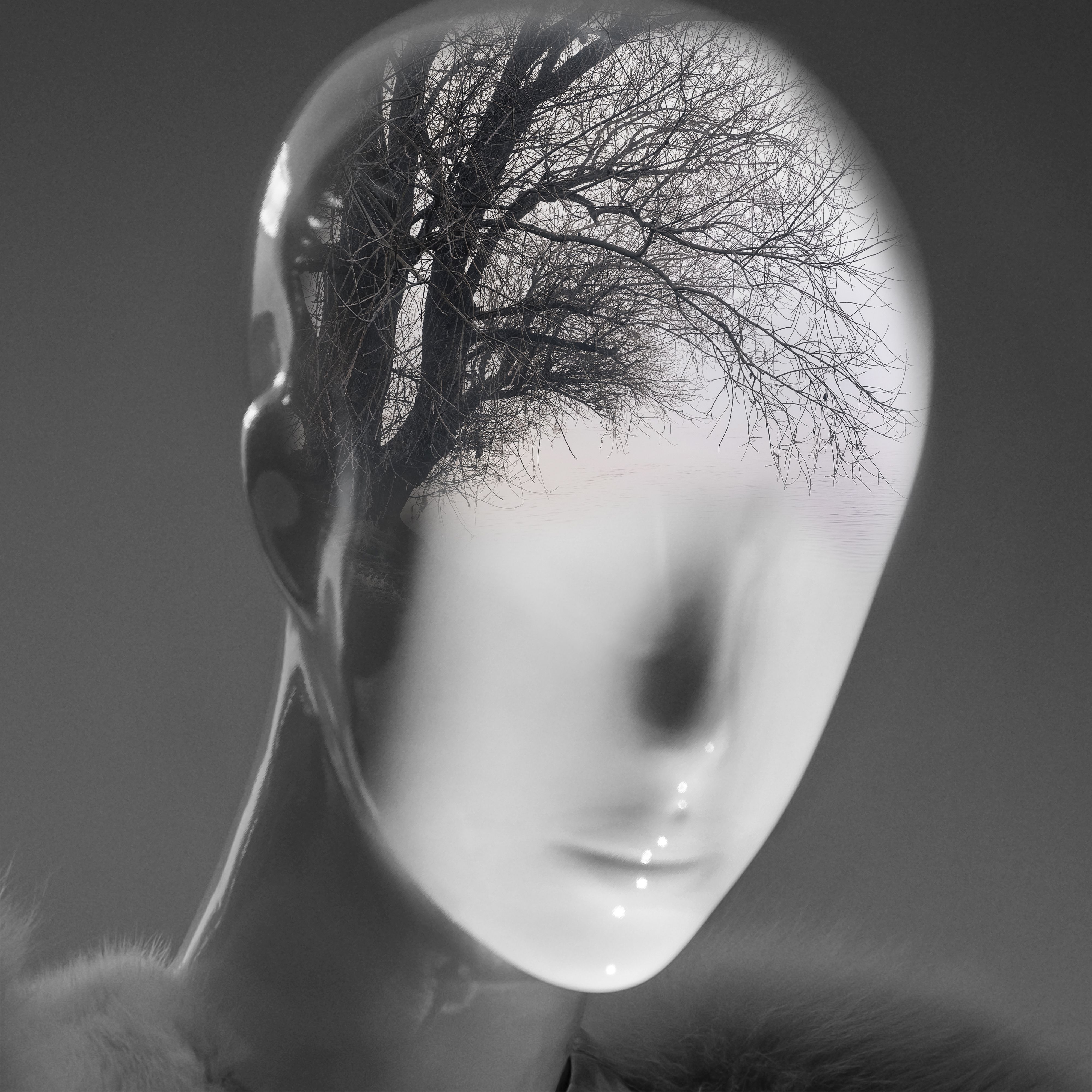 First recognized in 1872 by George Huntington, MD, Huntington disease (HD) is a neurodegenerative disorder that is characterized by progressive decline in motor functioning, cognition, and behaviors.1 In North America, approximately 30,000 individuals have this illness, and an additional 150,000 individuals are at risk for developing it.2 HD tends to occur more commonly among individuals of European descent, with a prevalence rate of 10 to 15 per 100,000. The incidence of HD is approximately 4.7 to 6.9 new cases per million per year in the Western population.3 The median age of diagnosis for HD is approximately 40 years.2 It is rare for HD to be diagnosed among individuals 20 years or younger, or among individuals 65 years or older. HD affects men and women equally.

The neuropathological hallmark among individuals with HD is the progressive atrophy of caudate nucleus and putamen due to neuronal loss.4 The clinical features of HD occur due to the loss of medium-sized projection spiny neurons in the dorsal striatum, which express the dopaminergic type 1 or 2 receptors. As the illness progresses, global neuronal loss and generalized cerebral atrophy occur, and the overall brain weight can decrease by up to 40%. These medium-sized projection spiny neurons use the inhibitory transmitter γ-aminobutyric acid and either dynorphin, enkephalin, or substance P as cotransmitters. It is thought that the loss of inhibitory input from the medium-sized spiny neurons, which usually exert an inhibitory effect, is the reason for the uncontrolled movements characteristic of individuals with HD. Individuals with HD also have intranuclear inclusions and protein aggregates in the dystrophic neurons of both the striatum and cortex.5 Additionally, the number of cortical inclusions correlates directly with the length of the CAG repeat expansion and the age of onset of the illness. Furthermore, these intranuclear inclusions tend to appear before the loss in brain weight. The loss of brain weight precedes the loss of body weight and the onset of neurological symptoms.

There is significant variability in the type, timing, and progression of clinical symptoms.4 The clinical course can be divided into premanifest and manifest periods.6 The premanifest period can be further divided into presymptomatic and prodromal periods. During the presymptomatic period, which is approximately 10 to 15 years before the onset of symptoms, individuals are not clinically distinguishable from those individuals without HD. During the prodromal period, individuals present with subtle motor, cognitive, and behavioral symptoms. Once individuals enter the manifest period with prominent motor, cognitive, and behavioral symptoms, the symptoms continue to progress and worsen, and the illness is ultimately fatal. The median survival time from the onset of motor symptoms is approximately 18 years.3

The symptoms of HD can be divided into 2 broad categories: progressive motor symptoms and neuropsychiatric symptoms.2 A diagnosis of HD is made only when the characteristic motor features manifest, even among individuals who are gene positive. 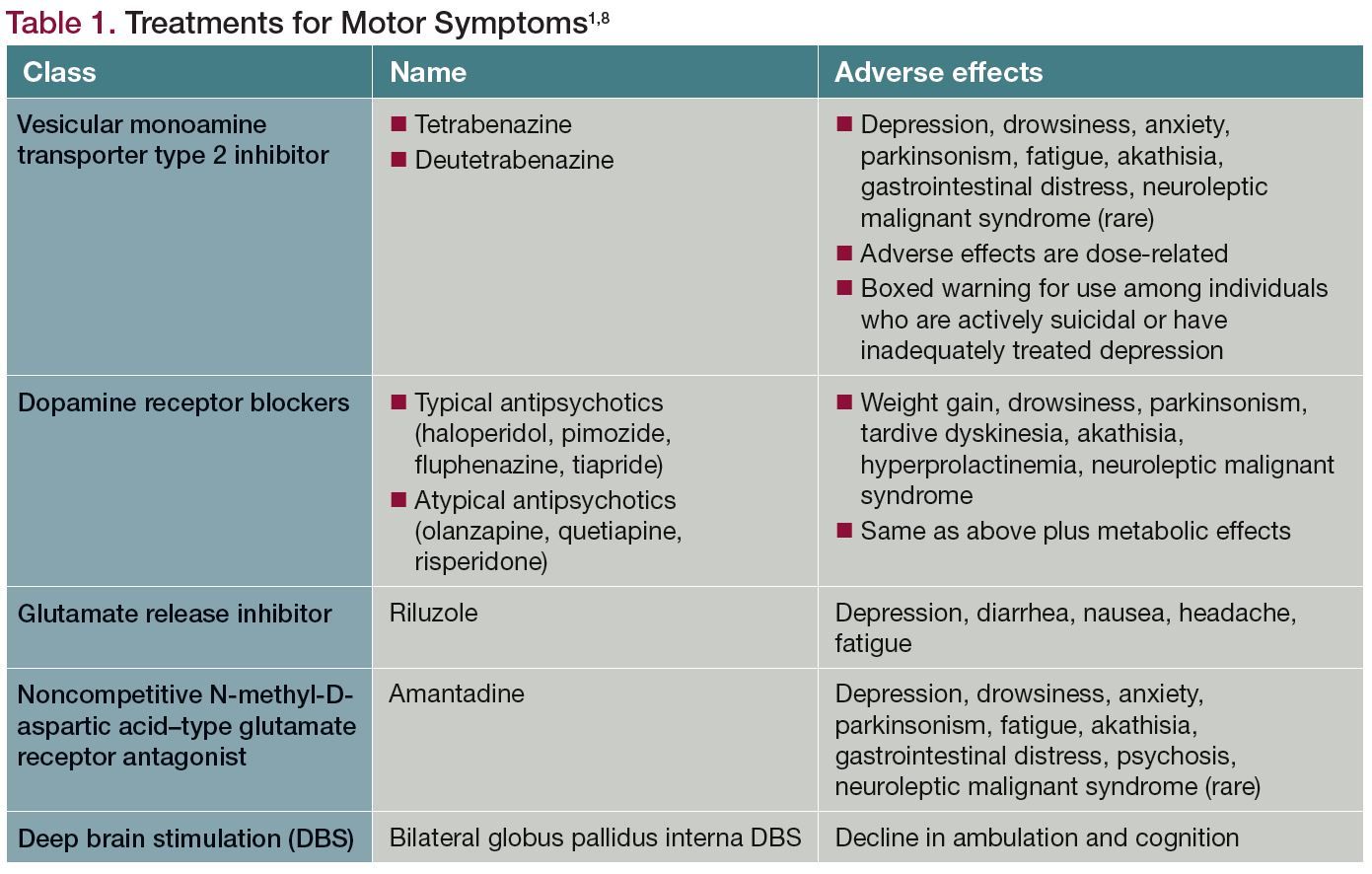 DEPRESSION. Depressed mood, loss of interest, guilt, and suicidality were more indicative of depression than somatic symptoms (eg, poor appetite, sleep disturbances, and psychomotor slowing).7 In patients with HD, depression is more common among women.10 Independent correlates of depression include a positive psychiatric history for depression, OCBs, a previous suicide attempt, and the use of benzodiazepines or antidepressants.

Suicidal ideation is also common in individuals with HD (Figure).11 According to a recent review, lifetime rates of suicide attempts range from 6.4% to 16%, and the percentage of deaths from suicide range from 2.2% to 10%. The risk factors include the presence of psychiatric comorbidities, especially depression, followed by anxiety, aggression, and previous suicide attempt. Other related risk factors include irritability, apathy, OCBs, psychosis, history of suicidal ideation, alcohol abuse, and the use of antidepressants. No consistent evidence showed that the risk for suicide was associated with sex, ethnicity, having children, history of incarceration, severity of motor dysfunction, disease stage, and specific neuronal loss or pathophysiologic circuit.

Examining the neuropsychiatric symptoms in a European HD cohort (REGISTRY) study, 24.7% of individuals with HD reported mild irritability/aggression, and 13.9% reported moderate to severe irritability/aggression.10 The prevalence of moderate to severe irritability and aggression increased as disease stage progressed, from 10.4% in the milder stages to 19.6% in the later stages. Independent correlates included male sex, younger age, history of depression, psychosis, and a previous suicide attempt.

OBSESSIVE-COMPULSIVE DISORDER. One review found the prevalence of OCBs ranged from 5% to 52%, whereas perseverative behaviors (PBs) occurred in approximately 75% of the individuals.12 Individuals with premanifest HD reported more OCBs when compared with gene-negative controls. However, individuals with manifest HD reported a higher rate of OCBs when compared with those with premanifest HD. Both OCBs and PBs are associated with duration and severity of HD, but they tend to decrease in the most advanced stage of the disease. A formal diagnosis of obsessive-compulsive disorder is also more prevalent than in the general population, and it is often classified as “obsessive-compulsive and related disorders due to another medical condition” using the DSM-5 criteria. OCBs tend to cause significant distress and impairment in functioning. PBs often occur without the individual’s full awareness or insight into their occurrence.

ANXIETY DISORDERS. Available evidence indicates that between 13% and 71% of individuals may present with symptoms of anxiety.4 Anxiety can occur at any stage of the disorder, including the prodromal stage, but it does not appear to be a measure of disease progression.14 Anxiety may present as generalized anxiety, social anxiety, anticipatory anxiety, or panic, or as posttraumatic stress disorder, and it may co-occur with depression. Anxiety may occur as a result of environmental factors as well as cognitive and physical impairments. It can also be confused with akathisia, which occurs as a result of medications (eg, antipsychotics or tetrabenazine) used to treat HD symptoms.

SLEEP DISORDERS. Approximately 90% of individuals report sleep problems, including insomnia, difficulties in falling asleep, frequent nocturnal awakenings, and excessive daytime sleepiness.15 Available evidence indicates that some sleep disorders are found in the early phase of the disease, even during the illness’ premanifest stage. These disorders may be associated with comorbid psychiatric disorders, especially mood and anxiety disorders. Involuntary movements and increased motor activity may also contribute to sleep difficulties. Many drugs that are used to improve the core symptoms of HD may also contribute to sleep disturbances, including amantadine, clonazepam, diazepam, L-DOPA olanzapine, quetiapine, riluzole, sodium valproate, tetrabenazine, deutetrabenazine, and venlafaxine.

COGNITION. Due to the degenerative nature of HD, individuals develop gradually progressive cognitive decline.7 Individuals develop the prototypical frontal-subcortical type of dementia, with frontal-executive disturbances, attentional deficits, and reductions in processing speed.16 These symptoms are the result of striatal and thalamic degeneration as well as degeneration in the caudate nucleus and putamen. As the illness progresses, abnormalities in visuomotor integration, visual perception, mental rotation, language production, and organization occur. However, the rate of progression of cognitive decline varies significantly among individuals, suggesting that other mechanisms (including environmental and genetic variables) may contribute to the neuropathological and clinical progression of cognitive decline.

Available evidence indicates a comprehensive and multidisciplinary approach is required. Given the complexity of the illness’ clinical presentation, it should be treated by a group of providers including physicians, nurses, occupational and speech therapists, physical therapists, and social workers.9 Both nonpharmacological and pharmacological management strategies have benefited individuals with HD-associated neuropsychiatric symptoms.14 The use of nonpharmacological treatment strategies often complements pharmacological treatments. A thorough multidisciplinary team assessment can assist in identifying the environmental and medical triggers and causes of neuropsychiatric symptoms, which then can be used in developing individualized treatment plans. Cognitive dysfunction can be reduced by structured daily schedules, providing cues, and having regular routines. In addition, respite care may significantly relieve caregiver burden.

There are no controlled trials for the pharmacotherapy of neuropsychiatric manifestations of HD, but evidence has been gathered from published case reports, case series, and an expert-based consensus guideline (Table 2).8,9,14,17 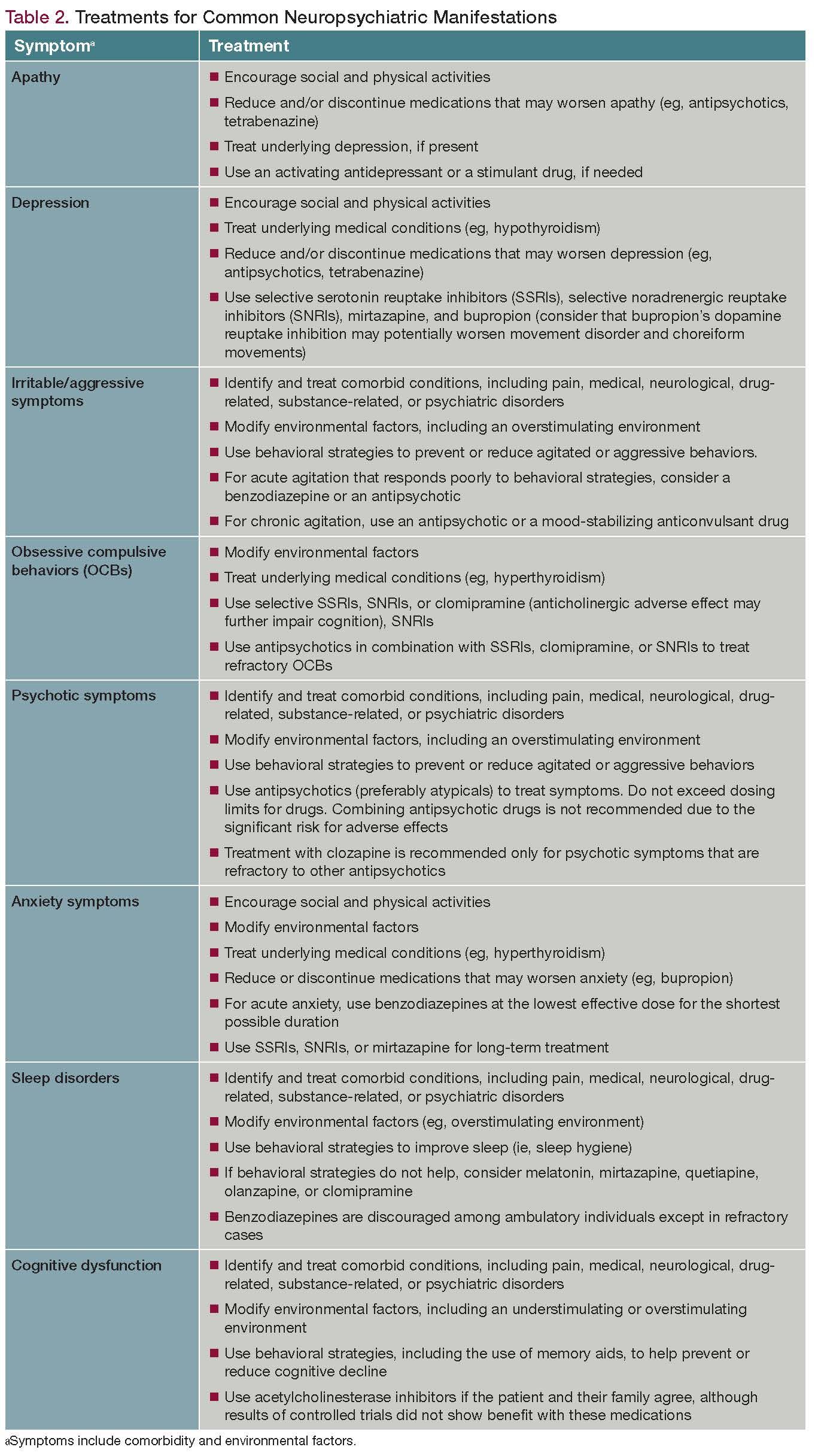 Currently, there are no disease-modifying strategies for the treatment of individuals with HD. Available treatment strategies focus on comprehensive multidisciplinary assessments and appropriate management of symptoms. There are no controlled studies for the treatment of neuropsychiatric manifestations of HD, but available evidence indicates efficacy for both nonpharmacological and pharmacological treatment modalities. The goal of treatment is to improve the quality of life for both the individual with HD and their caregivers.