To Sirtuin With Love: Caloric Restrictions and the Genes of the Aging Brain

One of the most remarkable discoveries in the field of life span alteration occurred in the past century and has to do with caloric restriction. 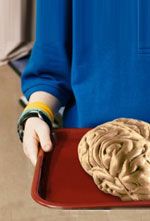 One of the most interesting research efforts of the past few years seems to have taken a page from the preoccupations of the self-help magazine world: the cognitive decline of the brains of aging baby boomers and the obese nature of their grandchildren. These topics have been united by the well-established finding that restricting caloric intake leads to an increased life span in almost every animal tested. Because eating habits are formed early in life, the prediction is that a sensible diet will increase a person’s life span.

Is that true? The link between caloric restriction and life span is certainly solid, although the jury is still out on many of the claims made in the general media. Serious scientists have been studying the molecular biology behind this link for a number of years. One particular group of sequences seems to stand in the gap between aging and food, that of the sirtuin family of genes (also called silent information regulator [SIR] genes). One member of the family, the SIR2 gene, has been studied in particular detail. This article discusses age-related cognitive decline, caloric intake restriction, and the role SIR2 plays in the process.

As the brain ages

It is the canonical experience of people older than 40 that senior moments become an increasingly familiar part of one’s thinking life. We forget names, we forget places, we forget where we put our car keys, and we wonder when-and why-our retrieval systems began to abandon us. Higher-order processing begins to change as well as memory, perhaps not as obviously, but apparently in a far more dramatic way. Although the types of cognitive decline clearly vary from one person to the next, no one escapes these behavioral changes completely or, perhaps, the panic that ensues for some individuals when they compare their previous talent with current abilities.

It is axiomatic that cognitive decline occurs because of physical changes that human brains undergo as they age. Yet demonstrating the specifics of the relationship has not always been easy. With the advent of more sophisticated technologies (and improvements in older technologies), that has begun to change. We now know that changes in the regulation of global gene expression patterns-mostly down-shifting-are observed in a broad swath of the CNS during aging. Gene products specifically involved in the physiological processing of inhibitory signals mediated by γ-aminobutyric acid) have shown particular vulnerability. These neuron-related changes are disproportionately large when compared with changes in other tissues (eg, kidney and muscle tissues show age-related up-regulation).

Alterations in gross neuroanatomical structure have also been observed for many years. Some of the most dramatic involve disruptions of the myelinated fibers that yoke disparate brain regions together to provide specific functions-particularly in the prefrontal cortex (PFC). The changes are generally not due to neuronal loss in the PFC, which is actually quite minimal in most aging brains, but to loss of functional connectivity. The accompanying disruptions of neural integration in these regions of the aging brain result in less organized activity than is found in the brains of youthful controls. Such alterations are thought to be associated with a measurable behavioral change in aging populations: disruption of executive function (a task involved in everything from impulse control to planning for the future). This is part of a general age-related decline in the brain’s higher-order functional abilities.

One of the challenges of studying cognitive decline in elderly populations is separating normal changes in cognition from abnormal pathological changes. Although these are not always easy to distinguish, examination of the aging hippocampus has provided valuable insights. The normal aging pattern of the hippocampus involves an inhibition of metabolic activities of the dentate gyrus and subiculum. That is not what you see in patients who have Alzheimer disease. At least initially, the inhibition primarily targets the entorhinal cortex. Neuronal death in these tissues, with a general volumetric shrinkage of the medial temporal lobe, has been shown to distinguish the disease state from typical aging processes.

It is also a matter of calories

Many of the data presented above appear to describe natural, typical processes. But are they inevitable? One of the first questions many people ask after going a few rounds with their senior moment brains is: can the decline be reversed? These are often the questions asked by people who want to increase their life span. The surprising answer to both questions, in a few cases described below, is yes.

One of the most remarkable discoveries in the field of life span alteration occurred in the past century and has to do with caloric restriction. (This does not mean caloric starvation; malnutrition does not provide the benefit and is a completely different issue.) A controlled decrease in the amount of calories consumed has changed the life span of a surprising variety of animals, including mammals. It truly does mean that if you eat less, you will live longer.

A matter of genes

Such robust findings work like scaffolding for researchers interested in the molecular biology behind the aging process and have certainly piqued the interest of people wanting to extend their life spans. What is the molecular mechanism behind the life span–extending properties of feeling hungry all the time? One of the earliest fruits of these research efforts was the isolation and characterization of the SIR genes.

The SIR genes were first isolated and characterized in yeast. They are a highly conserved family of sequences found in animals as diverse as roundworms and humans. One intensely studied member of this family is the SIR2 gene (Figure).

The SIR2 gene product functions as an NAD+-dependent deacetylase. In the presence of NAD+, SIR2 removes acetyl groups from proteins. Histone proteins are a favorite target of SIR2. As you may recall from your undergraduate days, histones are groups of proteins around which DNA molecules wrap themselves, somewhat like popcorn wrapped around string. Histones are deeply involved in regulating gene expression. Adding or subtracting subgroups to histones can profoundly influence the expression patterns of the genes in contact with the molecules.

How does SIR2 fit into the caloric restriction story? It was shown years ago that if you introduce SIR2 into yeast in such a fashion that you overdrive its expression, you can increase the yeast’s life span (measured as the number of times a cell completes a round of replication). If you severely restrict the caloric intake of an unmanipulated yeast, you can do the same thing. If you look for levels of SIR2 protein, you find that starvation has elevated its activity. The association appears to be strong, both by correlation and by direct intervention. The link between SIR2 protein and caloric restriction was first found in insects and then in mammals.

Subsequent research has muddied the waters of this otherwise seemingly tight story, however. Other researchers failed to replicate the results of the initial findings. Questions about various technical aspects that provided the original findings have been raised as well. There appear to be differences between genetic backgrounds in the primary test vehicles, from yeast to mice. These issues have yet to be fully resolved.

Such controversies are the nature of a good research project that, while hardly finished, has reached a certain maturity. These controversies are not deal killers regarding the association between the aging process and what goes in your mouth. The devil, as they say, is in the details. The fact that these issues can be raised at all demonstrates the enormous strides that researchers are making regarding the association between aging and eating-two of the most socially important issues of our time. That the arguments can revolve around deciding how the subtraction of acetyl groups changes the cell cycle simply shows how intimate, and how sophisticated, the progress has become.