Sleep-related problems are among the most disabling consequences of TBI, with multiple influences: impairment of neuronal plasticity, metabolomic alterations, loss of vascular homeostasis, and disruption of the blood-brain barrier. The authors take a close look. 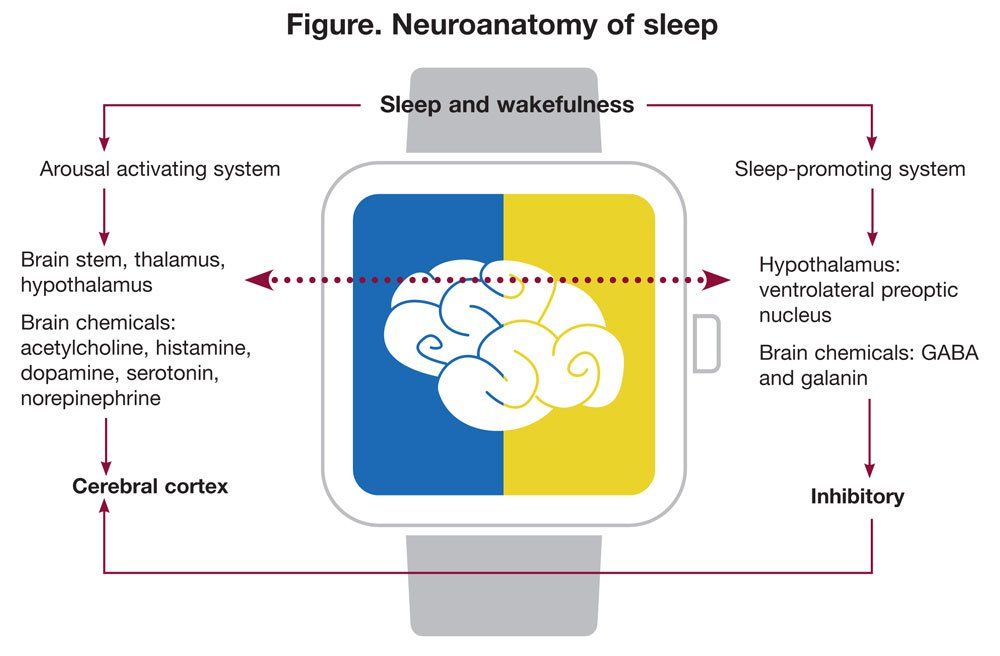 Traumatic brain injury (TBI) is best defined as an alteration in brain functioning or brain pathology caused by an external force. The rapid acceleration or deceleration external forces can be caused by blunt trauma, penetrating objects, or blast waves. The resulting primary damage includes shearing/tearing injuries of white matter, focal contusions, hematomas, or cerebral edema. Soon after the primary damage, a cascade of metabolic events sets in, which can cause secondary brain damage that may result from the generation of free radicals, release of neurotransmitters, inflammatory responses, calcium-mediated damage, mitochondrial dysfunction, and gene activation. TBI is associated with both focal and diffuse neuronal damage at the site of impact and in more distant brain regions.

Sleep-related problems are among the most disabling consequences of TBI, with multiple influences: impairment of neuronal plasticity, metabolomic alterations, loss of vascular homeostasis, and disruption of the blood-brain barrier. Moreover, patients with TBI sleep disturbances are more sensitive to pain; are at greater risk for neuropsychiatric problems, such as depression and anxiety; perform poorly on neuropsychological tests of memory, attention, and executive function; and have worse social functioning.1 They have longer hospitalization stays and once discharged from the hospital are at increased risk for suicide.2,3

Sleep disturbances can occur during both the acute and chronic phases of injury. Acute posttrauma phase sleep problems have the potential to interfere with neuronal recovery that may be complicated further by treatment with medications, such as benzodiazepines and haloperidol, which can be detrimental to the recovering nervous system. In the subacute and chronic phases, daytime drowsiness can impair participation in rehabilitation while nighttime wakefulness is often associated with psychiatric problems, behavioral dyscontrol syndromes, and overall poorer quality of life.

Patients with all severities of TBI are at risk for sleep problems, although some studies have noted increased rates with mild compared with severe TBI.4-6 However, these findings may be due to a lack of awareness or underreporting in persons with severe TBI, or perhaps because of the increased sensitivity to changes after mild TBI. Some findings suggest that there are changes in polysomnographic measures following TBI, such as longer sleep onset latencies, shorter REM onset latencies, frequent nighttime awakenings, and higher proportion of stage 1 sleep.7-10

The sleep-wake cycle depends on the coordinated function of multiple brain regions, including the brain stem, basal forebrain, hypothalamus, and the frontal-subcortical system, as well as a balance between the arousal activating and inhibitory systems (Figure). CT and other structural imaging devices can miss sleep-associated microstructural abnormalities in the brain. For example, in one study, CT scans did not pick up any brain damage, but when polysomnography was done, significant differences in electroencephalogram power spectra data were seen.11

The causes of sleep disturbances after TBI are not well understood. However, the mechanisms underlying sleep-wake cycle problems may include the disruption of neural circuits as well as a myriad of other medical and psychiatric disturbances and environmental factors.

• Insomnia disorder: roughly one-third of adults in the general population have occasional insomnia and about 6% to 10% meet the criteria for insomnia disorder; approximately 30% to 50% of patients who have suffered a TBI experience insomnia.12

• Narcolepsy: the prevalence of narcolepsy in the general population is 0.02% to 0.04%; the estimated prevalence in patients with a TBI is 3% to 5%.

• Breathing-related sleep disorders: obstructive sleep apnea hypopnea is present in 2% to 15% of middle-aged adults; among TBI patients, the prevalence is 23% to 36%.13,14

• Parasomnias: the prevalence of many parasomnias in both the general and the TBI population is unclear. Bjorvatn and colleagues17 report a lifetime prevalence of 4% to 67% in the general population, with sleep talking and nightmares accounting for 67% and sleep-related injuries and eating accounting for about 4%; Verma and colleagues16 report a rate of 25% in the TBI population, with REM behavior disorder being the most common.

Evaluation of sleep disturbances after TBI

When evaluating a brain-injured individual with sleep disturbances, a comprehensive evaluation is needed to rule out general medical conditions, psychiatric disturbances, and environmental factors (Table 2). The key elements are a detailed history from the patient and collateral information from his or her family, a review of medical records, and the use of problem-focused laboratory tests.

We advocate the 4 perspectives of the psychiatry model developed by McHugh and Slavney18 that serves as a “toolbox” to formulate and treat TBI sleep disturbances. This approach includes the disease perspective that focuses on the broken part in the brain and includes injury- and non–injury-related biological factors; the dimensional perspective that considers premorbid and/or injury-related cognitive and personality vulnerabilities; the behavior perspective that examines abnormal goal-directed behaviors; and the life story perspective that captures pre- and post-injury psychosocial stressors (Table 3).

If sleep disturbances persist after optimizing the management of general medical and psychiatric conditions, more thorough sleep assessments should be considered. These may include subjective assessments, such as a review of sleep diaries and standardized sleep scales (eg, Pittsburgh Sleep Quality Index, Insomnia Severity Index, and Epworth Sleepiness Scale), to determine the severity and the character of the disturbances.

The key elements of a sleep diary include:

• Number of awakenings at night

• Stressful events during the day

• Time and duration of exercise

• Amount of alcohol and caffeine consumed and time of consumption

• Medications taken before going to sleep

While polysomnographs are the gold standard for objectively measuring sleep disorders, patients may be unwilling to have overnight sleep studies or it may not be possible to refer them to sleep clinics. In these situations, home sleep testing with type III devices is a practical alternative, especially when there is high suspicion of obstructive sleep apnea.

For patients who are unwilling or unable to have overnight sleep studies, actigraphy may be a good alternative. Actigraphs are small, wristwatch-size accelerometers that are worn on a limb and record data on patient movement continuously for several days. These devices differentiate between sleep and waking based on the amount and pattern of body movement. Actigraphy is especially valuable because of ease of its use and extended recording.

Establishing a diagnosis is crucial. Before initiating medications for sleep, the focus is on the treatment of medical and psychiatric comorbidities. Nonpharmacological strategies such as sleep hygiene (Table 4) and cognitive-behavioral therapy (CBT) can be initiated simultaneously during management of psychiatric problems. A key element of sleep hygiene is educating patients about making behavioral changes and controlling environmental factors that have the potential to disrupt sleep. CBT for insomnia has 4 main components, including cognitive therapy, relaxation training, stimulus control, and sleep restriction.

Although sleep disturbances are common after TBI, there is a dearth of literature on the management of post-TBI sleep problems. Treatment is often influenced by standard practices in the management of sleep disturbances in the general population, although TBI patients may require special considerations. Medications should be used with caution because of concerns about adverse effects and drug interactions. Drugs commonly used to treat sleep disturbances in the general population, such as benzodiazepines, antidepressants, antipsychotics, and antihistamines, should be used very cautiously because some may have the potential to lower seizure threshold or interfere with neuronal plasticity. In addition, benzodiazepines have the potential to cause paradoxical agitation, adverse cognitive effects, physical dependence, tolerance, and rebound insomnia. We strongly recommend avoiding benzodiazepines in TBI patients. Sedating antidepressants, such as trazodone and mirtazapine, can be used off-label for the treatment of insomnia.

Table 5 provides a summary for the management of TBI sleep disturbances. These recommendations are based on our clinical experience and a review of the literature.1,12,19 Readers are also encouraged to read the clinical recommendations on management of sleep disturbances following concussions and mild TBI, released in June 2014 by the Defense and Veterans Brain Injury Center.20 If patients do not respond to initial treatments or if there is concern about the presence of other possible sleep disorders, such as sleep apnea, narcolepsy, sleep-related movement disorders, or parasomnias, referral to a sleep specialist is recommended.

Sleep disturbances are common in persons with TBI. The pathogenesis of TBI sleep disturbance is complex and often multifactorial; it may include biological and psychological effects of the trauma, premorbid psychiatric problems, effects of drugs, chronic pain, psychosocial stressors, and environmental factors. An organized formulation is important, because it can help establish the diagnosis and can aid in treatment of the sleep disorder and its comorbidities.

General psychiatrists should have a low threshold when referring patients with TBI sleep disturbances to sleep specialists for thorough assessments and objective testing. Management should always be multipronged and focused on the various biological and psychosocial factors associated with sleep disturbance. Sleep hygiene is an important component of managing sleep disturbances and should always be instituted as the first step in management, although medications and other somatic therapies may be necessary as well.

Acknowledgment-This review was supported in part by grant W81XWH-13-1-0469 to Dr Rao from the Department of Defense for research on repetitive transcranial stimulation (rTMS) for the treatment of depression and other neuropsychiatric symptoms after traumatic brain injury.

Articles in this issue
A Review of Changes in DSM-5 Sleep-Wake Disorders
Sleep-Related Violence
Parasomnias: What Psychiatrists Need to Know
The Correlation Between Sleep Disturbance and Suicide
Alzheimer Dementia and Sleep Disorders: Issues in Diagnosis and Treatment
Sleep Disturbances After Traumatic Brain Injury
Koryagin, Suspicious of Glasnost, Recounts Ongoing Soviet Abuses
PTSD in DSM-5: Understanding the Changes
Weight Loss Associated With Cholinesterase Inhibitors in the Elderly
Clinical Care of the Suicidal College Student: When and How to Involve Parents
The Clinical Implications of Violence-Related PTSD in Mothers and Their Children
Evolving Potential of Mobile Psychiatry: Current Barriers and Future Solutions
Nonpharmacological ADHD Treatments for Youths: How to Implement Evidence-Based Practice Recommendations
Somatoform and Related Disorders: An Update
Use of a Nasal Naloxone-Containing Kit in the Transition From Regional Psychiatric Hospital to Community Care: A 1-Year Follow-up Study
Related Videos
Related Content