Marco Bellocchio, one of the most psychoanalytically oriented filmmakers of his generation, entered the annals of Italian cinema in the 1960s to almost universal acclaim from critics at home and abroad. 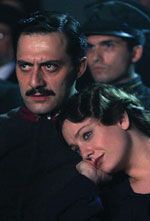 Marco Bellocchio, one of the most psychoanalytically oriented filmmakers of his generation, entered the annals of Italian cinema in the 1960s to almost universal acclaim from critics at home and abroad. An intellectual wunderkind, he had abandoned the academic study of philosophy for a creative career as an auteur. At age 27, with money borrowed from his family, he made his first film, Fists in the Pocket (1964). Filmed in black and white with a score by the great composer Ennio Morricone, Fists was a polemic against bourgeois conventions. As a creature of the 60s with the radical convictions that were to produce Europe’s cultural revolution of 1968, Bellocchio believed that the transformation of the bourgeois would have to take place on 2 levels, both in the public sphere of the political and in the private sphere of the personal. The family is where those 2 spheres intersect, and Bellocchio’s Fists was an unsparing psychological assault on a grotesque Italian clan.

Critics compared the surreal elements of the film to Bunuel who, along with Salvador Dali, had been inspired by Freud’s The Interpretation of Dreams. Bellocchio’s psychological inspiration seems to have been drawn from Freud’s radical disciple Wilhelm Reich and from R. D. Laing’s Politics of the Family. The family of Fists was burdened by epilepsy, blindness, and almost psychotic hatred-its family ties were toxic bonds. Cineastes agreed that whatever it all meant, Bellocchio was a brilliant Italian original.

After his second film, Close to China (1967), another radical polemic, Pauline Kael, in her waspish style declared his filmmaking “so distinctive that it already resembles genius” (emphasis added) and she saw in the quality of his work “an outgrowth of the hybrid art of opera.” Kael is almost 10 years dead and Bellocchio is now 70 years old, but with Vincere (2009)-a film about a woman who loved Mussolini-he has at last fulfilled his youthful promise.

Vincere (pronounced VEEN-cheh´-reh) is a critical success at home and abroad, it is a grand opera filled with the public passion of politics and the private passion of erotic surrender. It is by no means realistic in any documentary sense-it does not want to be. . . . still, it creates an invaluable picture of the rise of Mussolini, particularly for Americans who think of Mussolini as Hitler’s stooge. Bellocchio’s portrait of Mussolini, brought to life by the extraordinary performance of Filippo Timi, allows us to reassess the man who spoke fluent German, read Nietzsche, believed God was dead, called on Italians to strangle King Emmanuel in the guts of the last pope, and made himself into the Fascist Ubermensch-Il Duce.

Vincere, however, is not so much about Mussolini and fascism as it is about Italy’s rediscovery of a forgotten woman, Ida Dalser, whose love for Mussolini was like a madness and who, like the heroine of a great opera, embodies much more than herself. She is a metaphor for the passion of the Italian nation who surrendered themselves to Il Duce, believing they would be lifted up and exalted in his arms and instead were ruined by him. For psychiatrists, Ida Dalser presents a diagnostic puzzle. Does she have a delusional disorder, erotomania-the diagnosis film critic Roger Ebert suggested? Or is she a classic example of the human condition described by Congreve’s “(nor) hell a fury like a woman scorned”? And Dalser’s experiences in mental hospitals present all of the political misuse of psychiatry issues. Does she belong in a mental hospital or is she a victim of Mussolini’s determination to deny her existence?

One can see in Vincere the preoccupations and the artistic struggles that have characterized Bellocchio’s long trek to this artistic triumph. Back when Kael was finding opera in Bellocchio, other critics saw Antonin Artaud’s theater of cruelty. His sympathies were with the Red Brigade. He may have borrowed money from his own parents, but he was merciless in his depiction of families in his films. Typical and unforgettable is the beginning of his In the Name of the Father (1971). It opens with an older and younger man coming toward us from the shadows. Suddenly the older one begins to shout “respect me, respect me” as he beats the younger who more than returns his blows. It is a father and son, and Bellocchio’s scene chooses to show the power impasse of the Oedipal struggle. Every kind of patriarchal authority was attacked in his films: political, military, religious, and academic, and every kind of sexual repression as well. Bellocchio’s cinema does not spare women: most of them are mad or masochistic-or both.

Bellocchio’s preoccupations turned increasingly from the public space to the private space of the mind. His films lost their narrative clarity and became oneiric. His cinema was a series of arresting images connected by his own free associations. It was like watching someone else’s nightmares. In his own personal life, Bellocchio seems to have been searching for a way out of the limitations of his own consciousness. Many of his contemporaries in the 60s joined communes and experimented with consciousness-expanding LSD. Bellocchio sacrificed his own auteur’s voice and tried to merge creatively with others making communal films. He came under the spell of the psychoanalytic guru Massimo Fagioli, and joined his cult of group analysis in which scores of people would take part in a single session analyzing a dream together. He surrendered his creative autonomy to the will of Fagioli and collaborated on 4 films with him, most notoriously, Devil in the Flesh (1986).

Yes, Ida, too, is a masochistic woman. She falls in love with Mussolini and his aura of brazen power. When others are shocked by his public Nietzschean pronouncement that God is dead, she is thrilled. And she loves him even more when he rejects peace, parts with the socialists, and embraces nationalism. She is drawn to the firebrand and is eager to surrender to him. Unlike Devil in the Flesh, the sexual scenes in Vincere are a compelling revelation of who these people are. Ida wants to experience complete submissive love. She gives herself to Mussolini in her search for intimacy, orgasm, and reciprocity. We witness her pleasure and her fulfillment in surrender. While Mussolini, his eyes gleaming and fixed on some personal horizon, mounts her body for his own gratification and fulfills his sense of power.

Ida not only surrenders her body and soul to Mussolini, she sells everything she owns to support the publishing venture that launches his national political career. Bellocchio shows her waiting for Mussolini naked on the bed in her empty apartment, her body and the cash an offering to him. He takes it all but never gives her the love she wants as her reward. We sense, however, even at the height of their affair, that for Mussolini, Ida is only a conquest. He is incapable of love. Ida bears Mussolini a son, but he betrays her and rejects them both.

The heart of the film is a portrayal of Ida’s attempts to deal with that rejection. Filippo Timi disappears and the actual Il Duce now looks out at us from newsreels woven into the film. This helps convey the reality of the emotional distance that Ida denies. First she is sent off to live with relatives. But she refuses to give her Mussolini up. She writes letters to the Pope, to the King, to the authorities insisting that her relationship to Mussolini is real. For this she is sent off to a mental hospital and separated from her son.

Psychiatrists are taught that every delusion has an element of truth. But in Ida’s case, she is told her truth is a delusion, and the cure is to admit that she is lying about her relationship with Mussolini. There is one kind psychiatrist who believes her but counsels her to stop the struggle she can never win. What he fails to realize is that the fact of her relationship to Mussolini-and that she is the mother of Il Duce’s child-has become her reason for being and the source of her dignity. To give it up is to give up her identity and her sole project in life. She will die in a mental hospital, as will her grown son, who is played by Filippo Timi in another Bellocchio master stroke.

It would be a mistake to suggest that one will understand every artistic wrinkle in this film. Bellocchio is not one of those filmmakers who to be seen as avant garde weaves a linear narrative into a post-modern puzzle that can be solved. He has made a beautiful period piece that evokes the mood of the times, the temper of the people, a history of emotional, not cognitive, memories. Vincere is an endless feast for cineastes, a triumph for Bellocchio, and a challenge for psychiatrists.

This is filmmaking that does more than “resemble genius.” It is the thing itself.

Articles in this issue
Domestic Violence: Three Important Truths
Comprehensive Dictionary of Psychoanalysis
The “Minimum Necessary”: How Much Will You Need to Divulge to Insurers?
Early Signs of Autism Spectrum Disorders
Looking Back
The Business of Pleasure and Pain
Vincere
Clinical Manual of Sexual Disorders
Forensic Ethics, Interrogations, and Getting the Facts Right
The Forensic Psychiatrist and the Code of Medical Ethics
Adding the Diagnosis of Temper Dysregulation Disorder to DSM-5
Questions at “Doctor’s Appreciation Night” Dinner
Are We Training Physicians to Be Shift Workers?
Statins, Cholesterol Depletion-and Mood Disorders: What’s the Link?
A Conversation With Dr Richard Kogan
Related Videos
Related Content