The impetus to consider inflammation as potentially relevant to the pathoetiology of domain-based psychopathology (eg, anhedonia) and/or mental disorders, is provided by a confluence of factors discussed here. 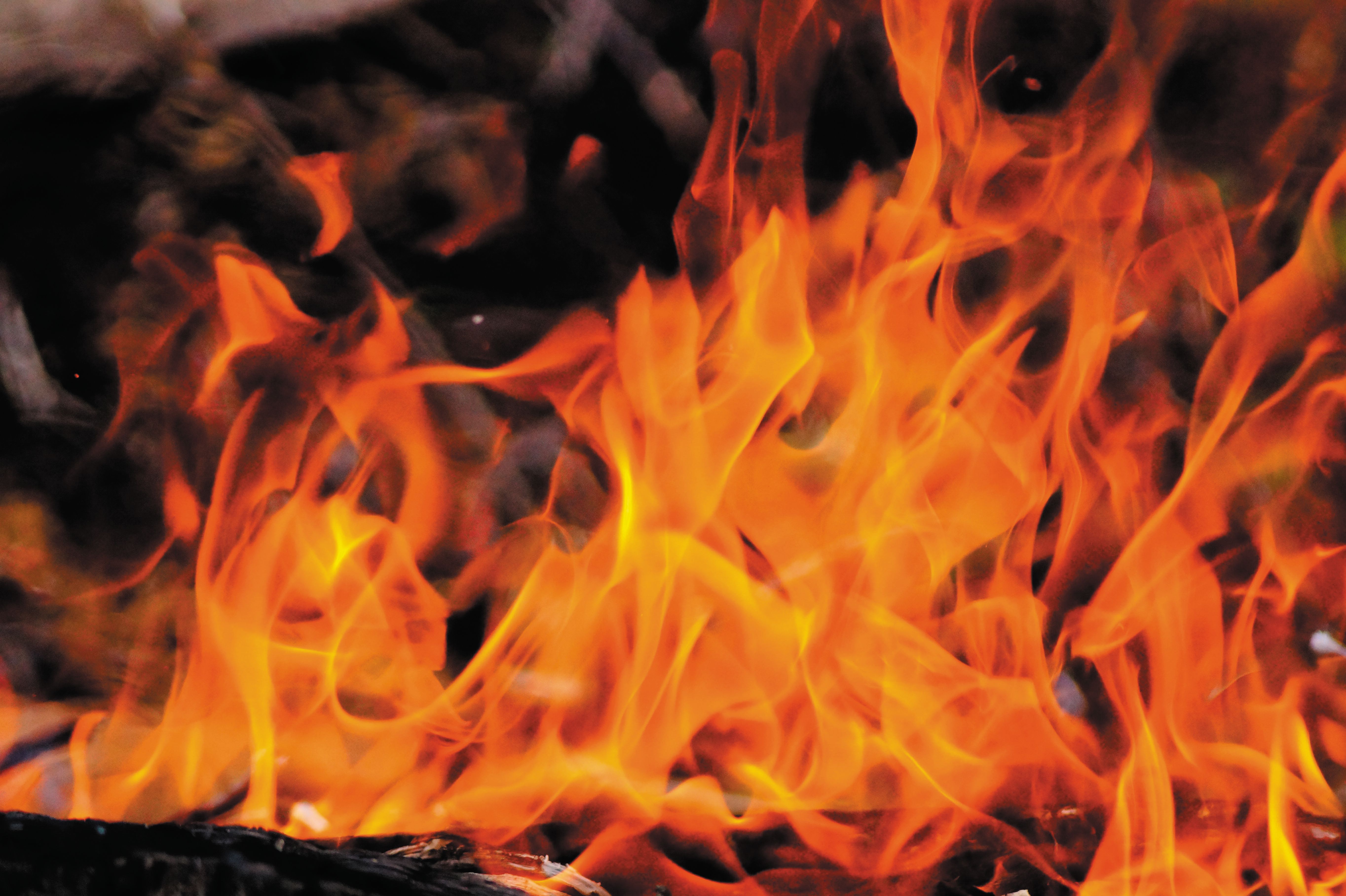 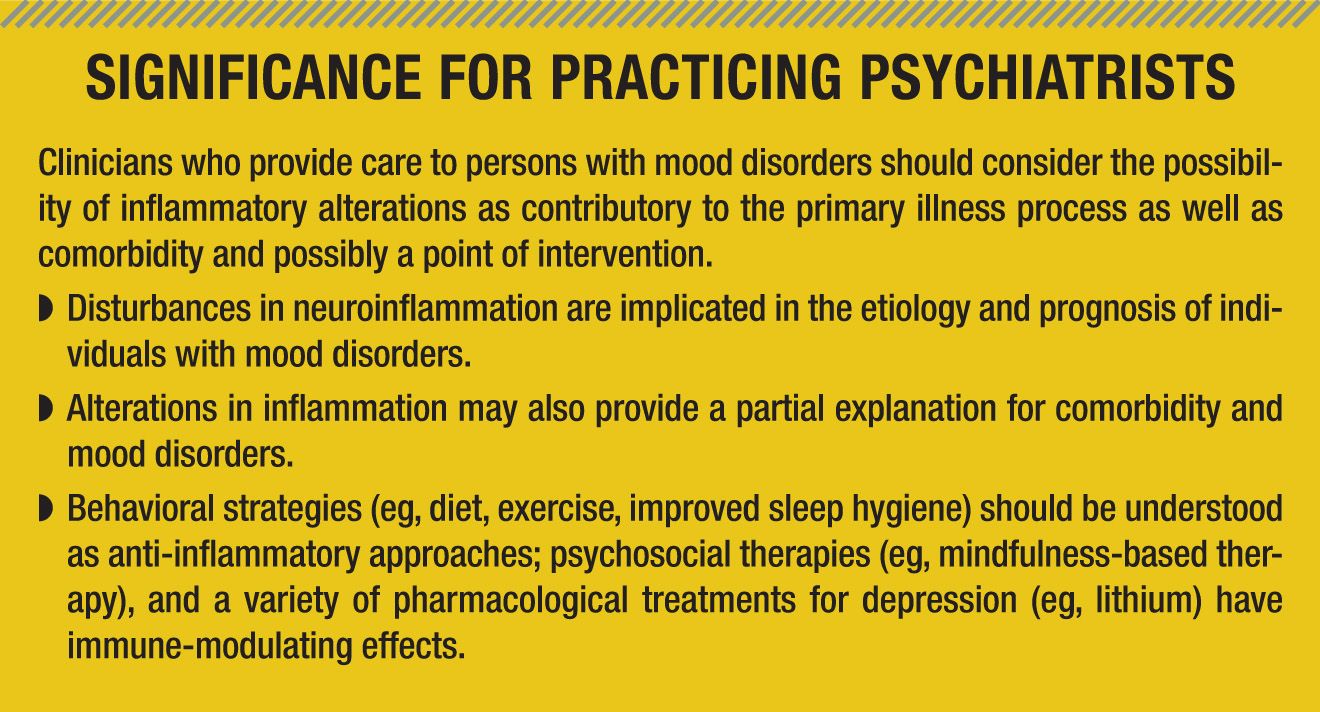 Abnormalities in the inflammatory system are linked to many brain-based disorders, including but not limited to, MDD and bipolar disorder (BD). The impetus to consider inflammation as potentially relevant to the pathoetiology of domain-based psychopathology (eg, anhedonia) and/or mental disorders, is provided by a confluence of factors.

Many individuals who receive conventional treatments for mood disorders do not achieve/sustain symptom remission. Patient reports also indicate that among those who experience “clinically relevant improvement,” significant deficiencies and dissatisfaction with treatment remain, particularly as it relates to experiences in positive mental health, vitality, resiliency, and premorbid levels of function.

Support for research on inflammation in psychiatry comes from advances in the characterization of neurobiological alterations in individuals with brain-based disorders. The ability to identify and characterize genomic variants in large data sets using Genome-Wide Association Studies, as well as a fuller understanding of the role of microRNA. Finally, the Research Domain Criteria initiative of the NIH, has brought the field to the attention of common dimensions/domains of psychopathology regardless of DSM category.

Evidence implicates inflammation as a fundamental neurobiological alteration, thus targeting this system may provide beneficial effect on illness trajectory. Preliminary evidence indicates that some anti-inflammatory treatments are not only generally effective in mitigating dimensional psychopathology measures, but may have additional benefits on comorbidity that differentially affects individuals with mood disorders (eg, obesity).1

The inflammatory system can be classified into either the innate or the adaptive immune system. The innate system is primordial with low memory capacity present throughout much of the animal species and comprising multiple cellular populations including but not limited to monocytes. The adaptive and/or humoral immune system is responsible for humoral immunity (eg, antibodies) and is comprised of cellular populations (B and T cells) that are capable of recognizing billions of different antigens.

The primary role of the inflammatory system dating back to early humanity was to fight off pathogens, which often came from wounding at the hands of predators and other humans. Inflammation was also key for wound healing. The agricultural revolution occurred approximately 10,000 to 12,000 years ago and brought humanity into close proximity with animal-borne pathogens. While this had the negative effect of increased mortality in the short term, in the longer term, it may have also fortuitously augmented immune-inflammatory capability. Advances in food production, agriculture, hygiene, sanitation, urbanization, as well as vaccination, all have contributed to the shift away from infectious disease, and to chronic non-communicable diseases as the principle source of morbidity and mortality.

Notwithstanding the fact that predators and pathogens are no longer the principle instigators of the inflammatory system, the system is still wired to react to “threat” without regard to cause. For much of the past century, causes such as urbanization, dissolution of family structure, social alienation, air pollution, and exposure to refined high-glycemic high-calorie foods, along with financial stressors, have become principles triggers of the inflammatory system.2 Consequently, “low-grade” inflammation is now implicated as cause, consequence, and comorbidity of many noncommunicable diseases, including mood disorders.

But what is the extent to which the disturbances in the inflammatory system proceed, cause, are associated with, and/or are consequences of mood disorders? Each of these possibilities could be of relevance in any patient. Results from longitudinal studies show that a proinflammatory balance is associated with an increased risk for incident mood disorders. For some individuals with mood disorders, perturbations in the inflammatory-homeostatic network are more pronounced during a state of depression compared with periods of remission. Mechanistically, this may be related to proinflammatory effects of sleep disruption, chaotic eating patterns, as well as dysphoric cognitive emotional processing. For other individuals, the magnitude of disturbance in the inflammatory system may be greater later in the illness trajectory after multiple episodes, suggesting a communicative and/or consequential effect.

Additional confounding factors relevant to mood disorders are the effect of comorbidity on the inflammatory system and iatrogenic effects. For example, overweight/obesity, as well as diabetes mellitus, are associated with abnormalities in the inflammatory system, while some medications (and other treatment modalities), may exert either salutary and/or amplifying effects on the proinflammatory balance (eg, lithium and weight-promoting drugs respectively).

Advances in neuroscience have enabled the identification of disturbances in the inflammatory system across multimodal and multilevel units of analysis. Disturbances in the inflammatory system have been identified in genetic variance, peripheral and central cytokine alterations, brain nodal structure, and circuit alteration in response to inflammatory challenge. Moreover, findings indicate associations between inflammation and motivation, reward, cognitive emotional processing, and cognition.

Conventional treatments for mood disorders can exert clinically mediated effects on the human inflammatory system. It is largely a consequence of the “streetlight” effect that relatively little attention has been given to it, with most of the emphasis over the past several decades on the monoamine system. It is not without historical interest that the first Nobel prize in medicine and physiology awarded to a psychiatrist was for the therapeutic effects of malaria fever for individuals institutionalized in insane asylums.4

Conventional pharmacotherapy (eg, SSRIs), as well as other classes of psychiatric medication (eg, lithium) exert effects across disparate levels of the inflammatory system. Perhaps the most compelling proof-of-concept that SSRI therapy indirectly engages inflammatory systems is replicated evidence that the prophylactic use of SSRI reduces the hazard for incident depressive episodes in persons receiving interferon-Î± therapy for hepatitis C or cancer. Conventional pharmacotherapies, small to moderate-sized study trials, as well as systematic reviews and meta-analyses, give reason to believe that clinically significant benefits within dimensional measures of depression, anxiety, anhedonia, and cognitive functions may be realized with these treatments.

Rather than conceptualize anti-inflammatory agents as mechanistically identical, it would be more accurate to evaluate these agents separately according to their postulated mechanism of action, as not all agents can be expected to be helpful, and some may even engender psychopathology. For example, corticosteroid therapy prescribed to individuals with established or latent mood disorders unequivocally exacerbate risk and severity of mood disturbance in select cases. Moreover, available evidence indicates that NSAIDs may interfere with optimal antidepressant efficacy. It is conjectured that deleterious effects of corticosteroids on cognitive emotional processing are in part due to “off-target” effects of these agents (ie, suppressing endogenous anti-inflammatory effects and amplifying proinflammatory balance), while for NSAIDs they may alter critical molecular targets relevant to SSRI efficacy.

It may be that the beneficial effects of anti-inflammatory interventions are elevated in discrete subpopulations with mood disorders with perhaps less meaningful effects in other subpopulations. For example, infliximab, FDA-approved for several inflammatory related conditions, significantly mitigates depressive symptom severity in individuals with elevated pre-treatment CRP levels, but not in depressed individuals with lower CRP levels. Furthermore, a proinflammatory balance observed in pretreatment may also identify a subgroup of individuals more likely to benefit from other approaches that engage inflammatory systems (eg, omega-3 fatty acids, ketamine, L-methylfolate, aerobic exercise).5–7 Nonpharmacological approaches (eg, electroconvulsive therapy, mindfulness-based therapy, aerobic therapy), are all “anti-inflammatory,” indicating that the inflammatory system is a convergent target across multiple treatment modalities.8,9

Other anti-inflammatory approaches that appear promising include the use of minocycline 60 to 200 mg daily, which has demonstrated beneficial effects on negative and cognitive symptoms of schizophrenia, as well as depressive symptoms of bipolar disorder.10,11 The antidiabetic agent liraglutide, which also targets the inflammatory system, is FDA-approved for not only type 2 diabetes but also weight loss.12 Preliminary proof-of-concept data indicate that liraglutide may improve depressive and cognitive symptoms in adults with bipolar disorder. A randomized placebo controlled double blind proof-of-concept study is evaluating infliximab for adults with bipolar disorder, who have pretreatment elevated CRP levels; results are expected in July of 2018. Finally, renewed interest in the gut microbiome/microbiota provides convergent evidence indicating that for some individuals with mood disorders, disturbances in the inflammatory system may be partially mediated by gut dysbiosis. It is not known, however, whether dietary manipulation, as a single modality intervention, is sufficient to correct gut dysbiosis and normalize a proinflammatory balance with associated improvement in psychopathology.

In the short term, what type of “anti-inflammatory” approaches should clinicians consider for their patients? Sleep hygiene, normalization of sleep behavior, and resetting chronobiology are all potently anti-inflammatory. Education and lifestyle modifications, including detailed information related to appropriate diet and exercise, are not only part of good lifestyle choices, but may in fact have direct effects on inflammatory systems relevant to psychopathology in select individuals.

Psychosocial interventions (eg, mindfulness-based therapies) exert anti-inflammatory effects and beneficial for individuals who have been affected by trauma, which in itself may be an antecedent to mood disorders s well as a proinflammatory trigger. In addition, the significant contribution of comorbidity (eg, obesity) to inflammation invites the need to specifically target these conditions when present, reiterating the emphasis on the need for treating the entire patient.

Currently no anti-inflammatory agent can be considered as being ready for “prime time” or highly recommended for use in persons with mood disorders either along with, or adjunctive to other agents. Instead, select anti-inflammatory agents should be considered promising, with a need for more evidence to establish efficacy, short- and long-term safety, as well as to identify which populations are more-or-less likely to respond.

It is not without interest, however, that preliminary data suggest that short-term exposure to minocycline, liraglutide, omega-3 fatty acids, as well as ketamine and L-methylfolate, may be preferentially effective in patients with a proinflammatory balance. Rigorous studies are needed to evaluate dietary interventions that specifically target the gut enterotype as potentially anti-inflammatory and anti-depressant/pro-cognitive.

From a population health perspective, it would be propitious to evaluate the effect of “anti-inflammatory approaches” such as the removal of soft drink machines from public schools on brain health, as well as a fuller characterization of the proinflammatory effects of urbanization, social isolation, and climate change on incident depression. Climate change is particularly relevant in some parts of the world, with emerging evidence that links air pollution and suicidality.

Dr. McIntyre reports that he is on the Speakers Bureau for AstraZeneca, Bristol-Myers Squibb, Janssen-Ortho, Eli Lilly, Lundbeck, Pfizer, Shire, Otsuka, Purdue, Takeda, and Allergan; he has received research support/grants from Stanley Medical Research Institute, National Alliance for Research on Schizophrenia and Depression (NARSAD), and National Institutes of Mental Health. Dr. Rong reports no conflicts of interest concerning the subject matter of this article. 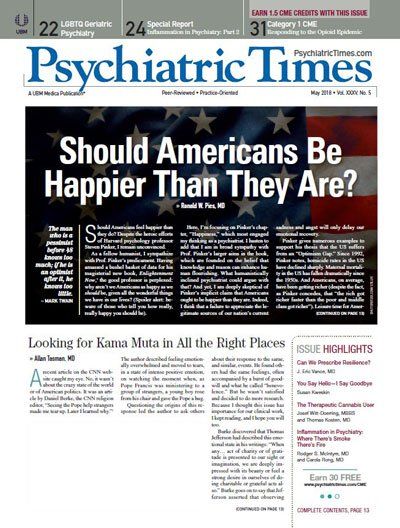 Where There’s Smoke, There’s Fire
Why Are Depressed Patients Inflamed? A New Path to Personalized Treatment in Psychiatry
The Therapeutic Cannabis User: 5 Key Issues
Special Issues in LGBTQ Geriatric Psychiatry
You Say Hello and I Say Goodbye
Psychogenic Purpura
Looking for Kama Muta in All the Right Places
Responding to the Opioid Epidemic and Expanding Access to Quality Treatment
Can We Prescribe Resilience?
The Tarts
Should Americans Be Happier Than They Are?
The User Experience: A Key Step in Realizing the Role of Mental Health Apps
Two Categories of Bipolar Disorder That Can Change Treatment
Related Videos
Related Content