Why Men and Women May Respond Differently to Psychological Trauma

PTSD is more prevalent in women than in men. What are the biological, psychosocial, and cultural factors that may explain why?

Posttraumatic stress disorder (PTSD) is a mental health disorder that arises after experiencing a traumatic event in about 10% of exposed individuals. A hallmark symptom is the reexperiencing of the traumatic event in the form of nightmares or flashbacks or reliving the event upon certain triggers. These unwanted memories cannot be controlled, and the event may feel like it is happening again. Individuals with PTSD will try to avoid these memories by not talking about them or by staying away from situations where potential triggers might be present (eg, the store where the robbery took place or watching the news about current combat events or natural disasters). Several cognitive and mood alterations—such as memory problems, negative thoughts or feelings, and high arousal levels—may manifest themselves in several ways. These include being easily startled and having angry outbursts, sleeping problems, or difficulty concentrating on everyday tasks.

Prevalence of PTSD in Men and Women

Although men experience traumatic events more often than women overall, studies have shown that women are 2 to 3 times more likely to develop PTSD after experiencing a traumatic event than men: about 10% to 12% in women compared with 5% to 6% in men.1,2 It is not just the prevalence of PTSD that differs between women and men, but also their PTSD subcluster scores. For instance, women report reexperiencing the event and anxious arousal more often than men,3 although a study looking at PTSD trajectory symptom courses over 1 year after admission to emergency departments found that a recovering trajectory is more prevalent in women, while men more often showed a delayed onset of their symptoms.4

Gender differences in PTSD symptoms that are due to stressors associated with the COVID-19 pandemic have also been reported, with women scoring significantly higher than men. Women have higher rates of reexperiencing events and of negative alterations in cognition or mood,5 dissociative responses, and a range of other posttraumatic reactions.6 With regard to the expression of PTSD symptoms, men might be more likely to feel anger and to have trouble controlling their anger, whereas women might feel more often anxious and depressed, as well as easily startled.

Which factors may help us understand why men and women respond differently to trauma? We describe how gender differences in the characteristics and timing of the traumatic event, as well as in the immediate and later biological and psychological reactions to the event, can impact how people respond to trauma.7 We would like to emphasize that there are no standard male or female response types to traumatic stress, but some features are more common in women and others in men. We use the term sex in this text to refer to a biological construct rooted in genetics, anatomy, and physiology. “Gender” is defined as a psychosocial construct that is an internal sense of self—whether individuals see themselves as women, men, or other gender identities—including the psychological, behavioral, and social consequences of one’s perceived gender.8

Characteristics of the Traumatic Event

In general, high-impact events, such as sexual abuse or interpersonal violence, are associated with a higher probability of developing PTSD than are lower-impact events, such as car accidents or disasters. Men and women differ in how often they experience specific types of traumatic events. Although men experience high-impact events, women have a much higher chance of being exposed to these types of events than men. This difference in exposure is partly responsible for the increased risk of PTSD in women.

Timing of the event is another important aspect for understanding gender differences in PTSD. Women experience traumatic events more often at a younger age. In children, these experiences may disrupt their neurobiological development, especially when repeated, such as in domestic violence or sexual abuse by a caregiver. Repeated childhood trauma, especially in combination with emotional neglect, is also a risk for personality disorders, dissociative disorders, or so-called complex PTSD.9,10 Biologically, there is accumulating evidence that in addition to more girls being exposed to this type of trauma, there are also differences in how different areas of the brain are being affected between boys and girls.11,12 Socially, traditional socialization encouraging gender-conforming behavior (eg, girls and women should be emotional and passive) seems to be less advantageous for women in terms of mental health.13

Culturally, the increased risk of PTSD symptoms in women is magnified in more traditional cultures. However, this increased risk may not be evident among women in professions traditionally regarded as masculine, such as first responders, police officers, and veterans.14 For example, the Figure summarizes results from a US Department of Veterans Affairs survey comparing differences in the prevalence of mental health conditions, including PTSD, among male and female veterans who had experienced military sexual trauma.15 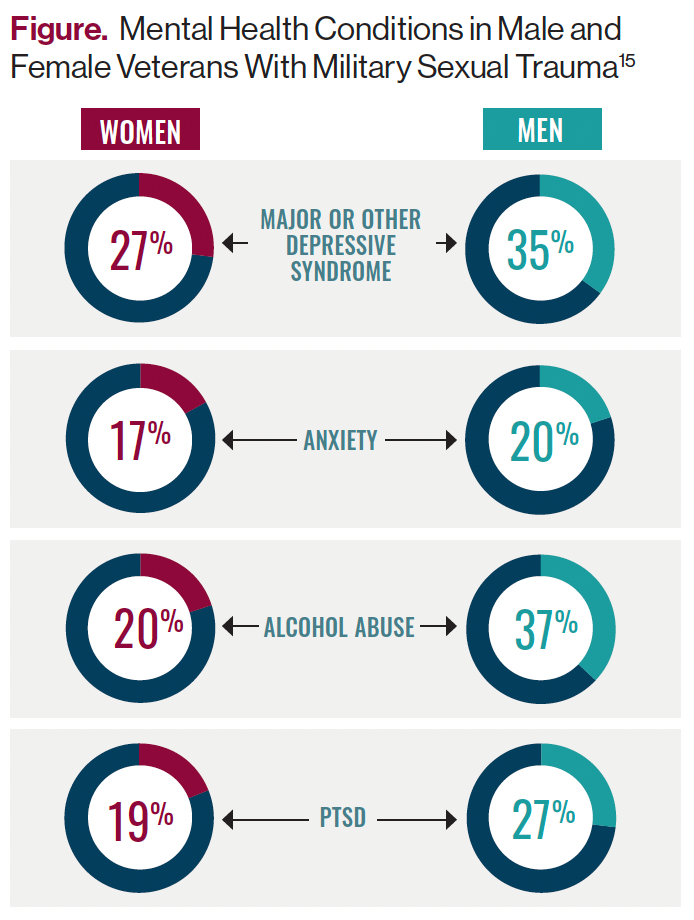 In order to understand the psychological strengths and problems of trauma survivors in the general population, it is important to consider gender stereotypes and roles across cultures, cultural responses to traumatic events, and cultural impact on symptom expression. Norms, beliefs, and rituals may shape the subjective meaning of trauma—for example, beliefs about the spiritual importance of nightmares and their significance for physical security in Native American communities or a local concept of a trauma-related syndrome such as baksbat (broken courage) among the Khmer in Cambodia.16 Furthermore, several non-Western cultures may use somatic symptoms to express distress. Our treatments are also still mostly Western-based and need both gender- and culture-sensitive approaches.17

High acute psychological responses to an event comprise a well-established risk factor for the development of PTSD. After an event, women report higher levels of perceived threat and acute distress than men. In addition, the risk factor of peritraumatic dissociation (ie, experiencing dissociative states such as depersonalization, derealization, amnesia, and/or detachment during the traumatic event, which is more prevalent in women than in men) has been found to be related to higher autonomic arousal, which can predict the subsequent formation of distressing intrusions.18

Coping styles that may be more or less effective in reducing acute stress levels also differ between genders. In line with a masculine gender role, men often cope with traumatic stress in a more problem-focused manner, which may decrease the risk of PTSD symptoms developing and of them becoming more chronic and severe, if they do develop.19 In contrast, women use more avoidant and emotion-focused coping styles, including relaxation, but they are also more likely to take psychoactive substances in the attempt to reduce the high arousal levels that are associated with a heightened risk of PTSD. The most pronounced gender difference is seen in seeking social support as a coping style, which is much more frequent among women. Because women are more likely to show a “tend-and-befriend” response to stress, which is clearly related to the availability of support from their social network, it is no surprise that unavailability of social support is one of the strongest predictors of PTSD.7

Neurobiologically, numerous studies show dysregulation in several systems in individuals with PTSD. Acutely after trauma, the amygdala—the alarm center of the brain—activates the sympathetic nervous system and sets a chain of neurobiological stress responses in motion.20 PTSD has consistently been associated with amygdala hyperactivity and lower ventromedial prefrontal cortex control over the amygdala, which may explain the vivid fear-laden memories in PTSD. Within the neuroendocrine response, a dysregulation of the hypothalamic-pituitary-adrenal (HPA) axis is typically found in PTSD (eg, with lower basal cortisol levels and enhanced glucocorticoid receptor [GR] function). And the most consistently found reaction to PTSD relating to the immune system is a proinflammatory state.20

Sex-specific epigenetic and neuroendocrine influences (eg, gonadal hormones or oxytocin) and immune responses contribute to differential responses to trauma.19 For example, women have often been reported to have lower basal cortisol concentrations compared with men, while showing a larger cortisol response to stress and lower proinflammatory cytokines. These impact the stress response chain and are associated with a higher PTSD risk. However, our knowledge of sex differences is based on limited data from women; until recently, only 2% of neurobiological research had been conducted in females (and these were mainly rats, not humans).

Treatment of PTSD and Clinical Implications

The treatments of choice for PTSD are psychological interventions, such as trauma-focused cognitive behavioral therapy and eye movement desensitization and reprocessing.21,22 The results for military personnel and veterans, overall, are less than impressive.23 Some studies show that men may drop out of trauma treatment more often than women, and that recovery rates are higher in women than men,24,25 but evidence for these gender differences is limited and inconsistent, according to recent systematic reviews.22,26

Several pharmacological approaches (fluoxetine, paroxetine, sertraline, and venlafaxine) reduce PTSD symptoms, but with a lower effect size than psychological treatments.27 Little research has been conducted on sex and gender differences in response to pharmacotherapy for PTSD; most still involve single-sex studies in men.28 A literature review of pharmacologically assisted psychotherapy for adults with PTSD showed approaches that combine medication and psychological treatment, including 3,4-methylenedioxymethamphetamine (MDMA)-assisted psychotherapy, may be promising interventions,29 but sex and gender differences are yet to be determined.

In sum, there are both sex and gender differences in biological, psychosocial, and cultural factors that may explain why PTSD is more prevalent in women than in men. In clinical practice, however, diagnostics should not be affected by gender stereotypes that could result in underdiagnosis of sexual trauma and PTSD in men.

Women are more likely to experience high-impact events during a developmentally sensitive period of life. However, if this happens to boys, the impact is not smaller than in girls. Neurobiological dysregulations (eg, in the HPA axis) and coping styles are important factors in explaining differential responses of men and women to psychological trauma. We need more research on sex- and gender-sensitive personalizing of both psychological and pharmacological treatments to optimize efficacy.

Still too much research is done in men only. Sex- and gender-sensitive research and reporting has certainly been growing in recent years, but more diversity in research populations is needed. Sex/gender-disaggregated data analyses will provide more valid information on the roles that sex and gender play in traumatic experiences.4

As diverse populations of traumatized individuals from Western and non-Western world regions seek mental health care, it is also critical to understand the role of culture in how men and women conceptualize trauma and express traumatic symptoms. This knowledge will help us better understand how to optimize gender-sensitive treatment cross-culturally.

Future research on PTSD should also focus on the interaction between sex and gender in response to traumatic events. As researchers gather more data on the roles of sex and gender as biological, psychosocial, and cultural variables in posttrauma responses, the picture will become clearer.