Anxiety-Associated Insomnia With a Twist of Depression

Anxiety and stress are closely linked, and they are among the chief causes of insomnia. Watch for a variety of emotional and physical factors that may play a role in worsening depression. More in this case report. 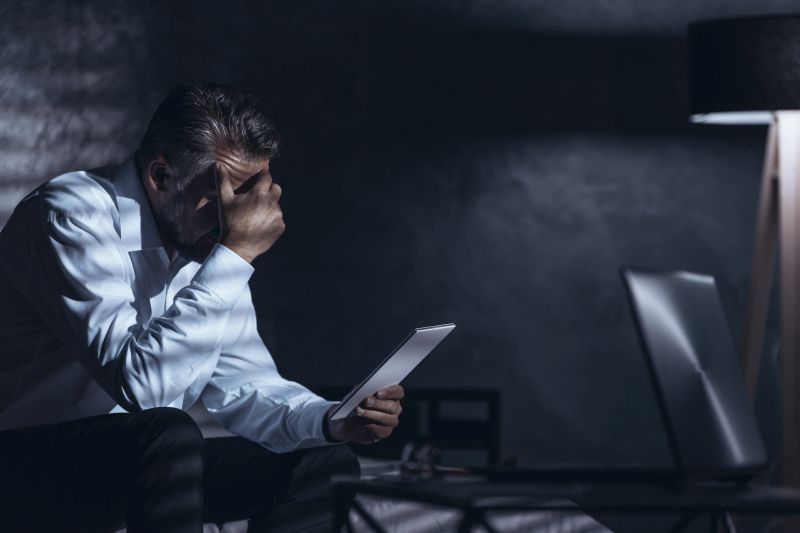 Insomnia is characterized by difficulty falling asleep, trouble staying asleep, and/or early waking. The result is usually inadequate sleep, with daytime effects associated with sleep deprivation. Up to 50% of adults report they have experienced insomnia at some point in their life.1

Anxiety and stress are closely linked, and they are among the chief causes of insomnia. The exact prevalence of stress and/or anxiety among persons with insomnia is unknown, but stress and anxiety have an impact on sleep because of a variety of emotional and physical factors.3 As with insomnia due caused by other factors, sleep deprivation due to anxiety-associated insomnia can bring about a variety of distressing symptoms during the day. Fatigue, irritability, anxiety, and depression are common consequences of sleep deprivation of any cause. Health problems like weight gain, hyperglycemia, and elevated lipid levels are associated with chronic sleep deprivation as well.

A 61-year-old man complains of insomnia, with difficulty falling asleep, frequent waking throughout the night, and early morning awakening. He estimates this has been going on for at least 6 months to a year, but he reports it is getting worse. He has been having trouble sleeping every night for the past few months and he naps during the weekend and in the evenings after work. He notes that he feels tired throughout the day and drinks cold caffeinated beverages “all the time,” to stay awake, totaling about 6 standard 8 oz cans per day.

He has gained 35 pounds in the past year. He used to regularly ride his bike for about 20 miles 3 or 4 times per week, but he stopped because of a stressful situation at work that has been distracting him.

For the past 2 years, he has been embroiled in a lawsuit related to an accidental injury of an employee at his place of business, where he is a manager. The lawsuit is related to what is described as inadequate safety equipment, and he explains that he is part of the group of people who are responsible for implementing safety at his workplace. The patient says the employee’s injury and disability have been upsetting for him. He also says the lawsuit has been stressful. He was disturbed when he heard about the injury, but he was able to manage the stress because he thought the employee would have a quick recovery and the legal proceedings would be resolved within a month or so.

As he began to realize the issue would not be resolved quickly, he became more and more anxious about it. He explains the work environment is anxiety-provoking because there are meetings about the lawsuit approximately once per month, often with just a few hours’ notice. It should be noted that the business and his own salary have not been impacted and he says he is not stressed about the financial implications of the situation.

He lives with his wife and he says he has maintained a calm demeanor at home. He has 2 sons in their late 20s who live on their own and he says there is no strain in his relationships with his family. Over the past years, he has been going to fewer social outings and often leaves gatherings early because he feels bored. He explains his loss of interest in social gatherings began around the same time as the lawsuit.

He reports he has felt anxious and worried for as long as he can remember, but he doesn’t remember ever complaining of insomnia, and he has never felt the need to talk to a doctor about it. The patient mentions he experienced anxiety for a year after his father died because he had to manage his mother’s home and finances when she didn’t know what to do.

Past medical history consists of allergic asthma diagnosed in his 30s for which he takes nasal steroids as needed. He also is sensitive to many foods, which give him a stomach upset and heartburn.

Stress and anxiety are linked with each other. Stress is typically a response to a situation, while anxiety is a lingering feeling of disturbance or unease. Stress can cause anxiety, which is the case in this patient’s situation. The patient’s history strongly suggests a correlation between his difficult experience at work, his anxiety, and his insomnia.

During a clinical workup, it is important to keep in mind that underlying medical issues can contribute to insomnia and anxiety. Thyroid disease and heart disease, in particular, can exacerbate patients’ symptoms. When other causes are not found, it is helpful for patients to understand symptoms such as weight fluctuation, indigestion, stomach upset, sweating, appetite changes, and sexual dysfunction can all be symptoms of anxiety.1 This patient has noted some of these effects.

When anxiety persists with excessive worry, especially without a precipitating factor that is out of the ordinary, it is often described as generalized anxiety disorder (GAD).4 The patient suggests he might have GAD, but based on his detailed history, it appear he is not excessively prone to anxiety out of proportion to the circumstances of his life.

The patient described in the vignette also has signs of depression. He has lost interest in socializing and exercise, which he used to enjoy. A depression screening would be beneficial as well. Major depression occurs in almost two thirds of patients with anxiety.1

Treatment of comorbid anxiety, depression, and insomnia requires a treatment strategy that is designed to avoid exacerbating any of the 3 issues. Serotonin reuptake inhibitors (SSRIs) are among the first-line treatments for depression with comorbid anxiety.5 Additionally, SSRIs can help reduce symptoms of insomnia for some patients.

This patient started taking paroxetine (Paxil) but became very tired. He was unable to tolerate the fatigue, so the medication was discontinued. He wanted to try another medical treatment, however. He was prescribed amitriptyline (Elavil), a tricyclic antidepressant. He was more satisfied with the treatment and wanted to continue to take it. He also agreed he might benefit from counseling, as he did not see a clear light at the end of the tunnel regarding his situation at work, and he didn’t anticipate an improvement of his symptoms until the issue resolved.

• Anxiety and GAD are not the same conditions, even though people with anxiety may be prone to recurrent episodes.

• Insomnia is caused by and can cause anxiety and depression.

• Treatment of insomnia with anxiety and depression entails a strategy that is mindful of all 3 conditions.

The above case is for illustrative purposes only. Identifying factors have been changed. -Ed

Dr Moawad is Adjunct Professor at John Carroll University, and Instructor, Case Western Reserve University in Cleveland, OH. She is the Editor in Chief Emeritus of Neurology Times (2017-2019).