A plethora of studies support the hypothesis that inflammation plays a role in the pathophysiology of major psychiatric disorders. 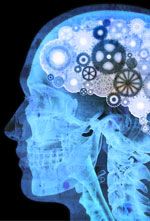 Psychiatric disorders are heterogeneous and of multifactorial origin.1 The illness course is often chronic and associated with high rates of nonrecovery, episode recurrence, interepisodic dysfunction, and morbidity as well as premature mortality.

It is therefore not surprising that MDD, bipolar disorder, and schizophrenia are among the primary leading causes of disability and economic burden worldwide. One major contributor to the economic burden associated with these conditions is the limited capability of available treatment options to effectively modify the disease process, fully restore function, halt illness progression, and treat cognitive deficits.

Since the original description of lithium’s efficacy for mania in 1948, followed by chlorpromazine and iproniazid shortly thereafter, no substantial pharmacological advances have been made in the field of psychiatry. Although advances in safety, tolerability, and simplicity of use have been made, the long-term outcomes for most patients with MDD, bipolar disorder, or schizophrenia remain largely the same as they did several decades ago, ie, many of these patients do not achieve symptomatic, syndromal, and functional recovery with conventional pharmacotherapy. This underscores the need for restructuring the current disease model.

The prevailing theory for the past 50 years has been that affective and psychotic disorders are subserved by disturbances in monoamines. Yet, despite intensified research efforts, monoamines have not proved to be reliable biomarkers of psychiatric disorders and no disease-modifying agents have been discovered on the basis of this model. A more comprehensive disease model that encompasses other physiological systems may accelerate progress toward novel treatment development.

Results from preclinical and clinical translational research indicate that disturbances in inflammation may play a role in the pathophysiology of psychiatric disorders, including MDD, bipolar disorder, and schizophrenia. Hence, it could be hypothesized that inflammatory mediators may constitute novel targets for drug development.

Cytokines are pleiotropic and often redundant soluble proteins that regulate survival, differentiation, proliferation, and effector functions of tissues and cells. While these proteins are well-known mediators of innate and adaptive immunity, more recently they have been implicated in a variety of other systems. For example, inflammatory cytokines have been shown to interact with neurotransmitter metabolism, neuroendocrine function, and neural as well as glial plasticity. Peripherally and centrally derived inflammatory cytokines exert a bidirectional influence across the blood-brain barrier or via peripheral afferent nerve fibers (ie, vagus nerve).1,2

The increased incidence of inflammatory diseases in individuals with psychiatric disorders (eg, cardiovascular disease, obesity, autoimmune diseases) provides conjectural evidence that inflammatory mediators may be involved in the pathophysiology of these conditions. The obverse association is also reported, wherein in individuals with rheumatic diseases, the incidence of subsequent psychiatric disorders is higher.

In a population-based study that evaluated the entire Swedish population, the standardized incidence ratio of subsequent psychiatric disorders was highest for individuals with systemic lupus erythematosus followed by ankylosing spondylitis and rheumatoid arthritis.3 Further analysis revealed a higher incidence of subsequent affective, psychotic, and personality disorders, as well as dementia and delirium, although the risk of psychotic disorders was significant only in women with rheumatoid arthritis and systemic lupus erythematosus.

Other population-based studies, however, have reported a lower incidence of schizophrenia in individuals with rheumatoid arthritis.4,5

Higher rates of depression are also evident with various other medical conditions, including obesity and cardiovascular disease.1 The bidirectional co-occurrence of psychiatric and autoimmune or inflammatory diseases suggests the involvement of common networks central to the pathophysiology of these conditions. 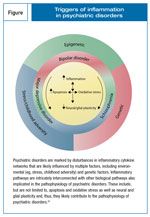 Triggers of inflammation in psychiatric disorders

The hypothesis that inflammatory cytokines play a role in the pathophysiology of psychiatric disorders stems from the observation that sickness behavior is characterized by signs and symptoms that are common to major depression. Sickness behavior is a nonspecific reaction to inflammation that is mediated by proinflammatory cytokines (eg, interleukin (IL)-1, IL-6, tumor necrosis factor Î± [TNF-Î±], and interferon-Î³ [IFN-Î³]) and is characterized by decreased appetite, amotivation, cognitive impairment, and neurovegetative symptoms.

There is a pressing need for studies of inflammatory markers in children and adolescents at risk for or in the early stages of a psychiatric disorder. At this point, it is not known if inflammatory cytokine abnormalities are a cause or consequence of the illness. Preliminary evidence suggests that manic but not depressive symptom severity in adolescents with bipolar disorder is significantly associated with high-sensitivity C-reactive protein (CRP) levels, an acute phase reactant that is elevated in response to inflammation, but not with IL-6 levels.16 A preliminary proinflammatory gene expression signature has been reported in offspring of individuals with bipolar disorder, and elevated messenger RNA (mRNA) levels as well as protein expression levels of IL-1Î², IL-6, and TNF-Î± have been reported in the prefrontal cortex of adolescent suicide victims.17,18 Longitudinal studies in children at genetic risk for major psychiatric disorders may aid identification of biomarkers that allow for earlier detection of candidates for prophylactic treatment.

Although the triggers of inflammation in psychiatric disorders are unknown, they are likely multifactorial in origin and encompass environmental and genetic factors (Figure). For example, maternal infections as well as maternal stress have been reported to pose a risk for the onset of schizophrenia later in life.19,20 Early childhood stress has also been shown to trigger an inflammatory response and may render individuals more vulnerable to psychiatric disorders.

Among female adolescents at high risk for depression, transition to depression was associated with increases in CRP and IL-6 levels; the magnitude of these changes was greater among females with multiple types of childhood adversity.21 Lower socioeconomic status in early childhood (1 to 2 years of age) has also been associated with elevated circulating IL-6 levels in adulthood.22 Environmental factors during the prenatal period or early childhood may activate the inflammatory response, which in combination with a genetic susceptibility or epigenetic modification, may increase the risk of psychiatric disorders.

Inflammation is highly interconnected with oxidative stress and results in a widespread influence on protein expression and cell survival. Oxidative stress exerts effects on DNA methylation patterns and produces unique epigenetic profiles that may increase vulnerability to psychiatric disorders. For example, decreased IL-6 CpG methylation is associated with elevated serum IL-6 and CRP levels in individuals with lifetime depression.23 Moreover, inflammation and oxidative stress are associated with increased apoptosis and decreased neural and glial plasticity.24 Abnormalities in these processes have also been reported in persons with MDD, bipolar disorder, and schizophrenia.25-27

Anti-inflammatory agents have been shown to mitigate psychiatric symptoms. For example, adjunctive celecoxib has been shown to exert antidepressant effects in MDD and bipolar disorder as well as ameliorate symptoms of schizophrenia.28-30 Minocycline, a tetracycline antibiotic with anti-inflammatory properties, has also been shown to mitigate negative symptoms and improve cognitive function in patients with schizophrenia.31 Moreover, evidence from animal studies and a pilot open-label clinical trial in patients who had MDD with psychotic symptoms suggests that minocycline exerts antidepressant effects.32,33 TNF antagonists may also have antidepressant effects, as suggested by improvements in secondary measures of depression and quality of life in individuals with inflammatory disorders.34

A plethora of studies support the hypothesis that inflammation plays a role in the pathophysiology of major psychiatric disorders. A unique inflammatory signature capable of distinguishing between each condition, however, remains to be elucidated. Although differences between the psychiatric disorders have been reported, no consistent disorder-specific profiles have emerged from these efforts. The heterogeneous presentation of each psychiatric disorder and the pleiotropic nature of inflammatory cytokines support the hypothesis that a combination of biomarkers along with genetic and environmental risk factors may prove to be a more reliable predictor of disease.

Considering that not all individuals will manifest inflammatory abnormalities, identifying subtypes of mood disorders (perhaps informed by biomarkers) may help identify a subgroup of individuals with mood disorders wherein inflammatory disturbances are a critical component of the pathoetiology and/or treatment. With technological advancement, it is now possible to conduct microarrays and evaluate over 1000 analytes simultaneously. Preliminary studies using this method have begun to delineate common and distinct biological processes in MDD, bipolar disorder, and schizophrenia, bringing us one step closer to a more comprehensive model of disease and pharmacological revolution.38

Acknowledgment-The authors would like to thank Marena Manierka for her invaluable input and comments during the writing of this article.