A Case of Inflamed Feelings?

A 52-year-old female college professor was referred to a psychiatrist by a nurse practitioner at the college health clinic. The referring diagnosis was “adjustment disorder with depressed mood versus atypical depression with somatization; rule out fibromyalgia.” 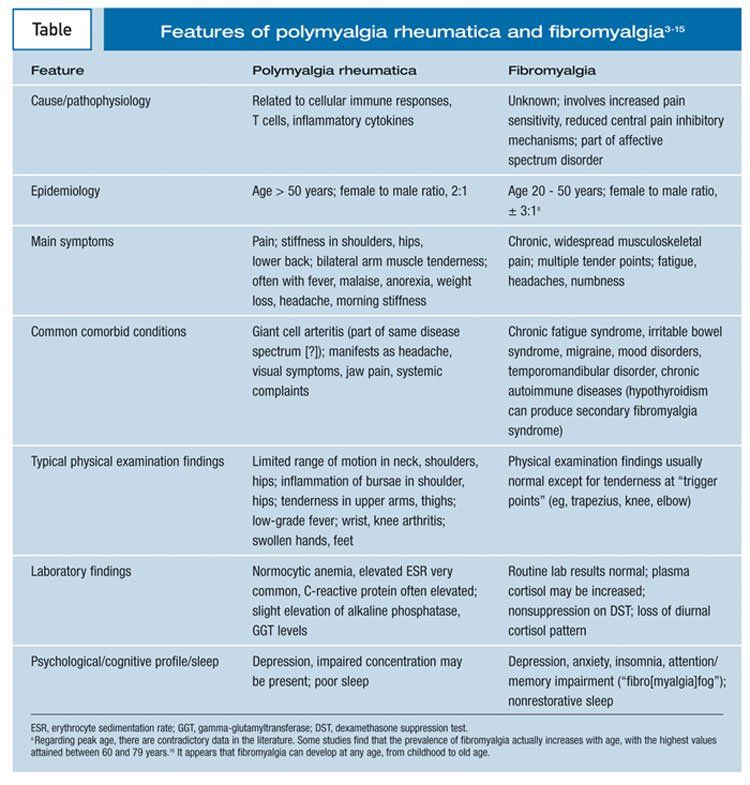 A 52-year-old female college professor was referred to a psychiatrist by a nurse practitioner at the college health clinic. The referring diagnosis was “adjustment disorder with depressed mood versus atypical depression with somatization; rule out fibromyalgia.” The patient had seen the nurse practitioner 1 month earlier and had complained of “feeling lousy for 2 months. . . . I can’t think, I ache all over, I have no energy, my mood is terrible.” The patient said her symptoms began suddenly with pain and stiffness in her shoulders. These symptoms developed about 5 days after the breakup of a long-term romantic relationship with a male graduate student, which was accompanied by considerable guilt and self-recrimination. There was no known physical strain or trauma that preceded on-set of pain. Over the past 3 months, the patient had experienced poor appetite, a 9-lb weight loss, poor concentration, and nonrefreshing sleep associated with morning stiffness.

Given the acute onset of somatic symptoms shortly after the loss of an important relationship, I can see why the nurse practitioner wondered about atypical depression (AD). That term, of course, has meant many things over the years, but certainly psychosomatic features have been noted in AD, including a sense of “heaviness” in the limbs.1,2 On the other hand, patients with AD often report hyperphagia and weight gain, which are not reported in this case. Also, it strikes me as somewhat odd that the initial complaint was one of pain and stiffness in the shoulders. Since these complaints followed the breakup of a highly conflicted relationship, one might hypothesize some type of conversion-like reaction in which the psychic pain of the loss was symbolically represented as shoulder pain. One might even speculate that the somatic pain the patient felt was a kind of self-punishment for her involvement with a student, about which the patient clearly felt guilty.

But notwithstanding these psychodynamic factors, I also wonder about an inflammatory or other somatic illness that might have set all this off. The nurse practitioner raised the question of fibromyalgia, and I think we need to consider this possibility. There is a good deal of overlap between fibromyalgia and mood disorders3; however, this patient may be a bit “old” for the usual onset of fibromyalgia. At this point, I would like to know the findings from the initial physical examination and any laboratory tests that were done when the patient was first seen. I would also want to know the results of any mental status examination performed. Past psychiatric and family history might also help point us in the right direction.

According to the report of the nurse practitioner, the patient’s initial physical examination was notable only for “limited range of motion in the neck, shoulders, and hips; some inflammation of bursae in the shoulder, and some tenderness in upper arms and thighs.” At that time, the patient had a low-grade fever (temperature, 37.5°C [99.5°F]). Laboratory tests revealed a normal white blood cell count and slightly decreased hemoglobin and hematocrit values, with normal cell size. Electrolyte, blood urea nitrogen, creatinine, liver function, and thyroid-stimulating hormone levels were all within normal limits. No formal mental status examination was done at that time, but the nurse practitioner described the patient as looking “sad, anxious, and distraught.”

During the psychiatrist’s mental status examination, the patient was alert and oriented x 3. Speech was within normal limits and there was no thought process disorder. Affect appeared restricted, and the patient described her mood as “down.” The patient had some difficulty in subtracting 7s serially from 100 (2 errors) but recalled 3/3 items at 3 minutes. There was no evidence of any psychotic features, ideas of reference/influence, and so on. Past psychiatric history was essentially negative, with no previous depressive, manic, or hypomanic episodes. The family psychiatric history was also noncontributory.

Since the original examination conducted by the nurse practitioner, the patient reported 2 new pain symptoms: a dull, nearly constant headache and pain in her jaw when “chewing tough foods.”

There are several findings in the physical examination, laboratory tests, and history that are now moving me away from depression as the primary diagnosis. Since her problem began, the patient has had pain complaints in multiple sites-her shoulders at first, and now her head and jaw. I might consider pain disorder associated with psychological factors as a diagnosis, but some of the physical and laboratory findings make me suspicious that something else is going on. A picture characterized by chronic pain and stiffness, fatigue, headache, and difficulty in concentrating is consistent with fibromyalgia.

The tenderness in the patient’s upper arms and thighs might also suggest a fibromyalgia-like syndrome; however, fibromyalgia usually manifests with tenderness to palpation at other “trigger points,” such as the trapezius area, the fat pad of the knee, and the elbow. Apparently, those sites were not tender at the initial examination, although I am not sure the nurse practitioner checked specifically. I do not know what the headache and jaw pain represent but, of course, the question of some kind of space-occupying brain lesion needs to be raised. In any case, the low-grade fever and normocytic anemia make me wonder whether an inflammatory process is occurring.

I would like to get an erythrocyte sedimentation rate (ESR) and to have this patient seen by a rheumatologist. I would also order a head CT or MRI for the patient to make sure I am not missing a mass lesion. In the meantime, I think it is probably worth trying an antidepressant, just to see if we can provide her some relief. I would probably select an agent with “dual action” on norepinephrine and serotonin; such agents have also been found useful in fibromyalgia.4

An MRI of the brain was read as normal, with no evidence of any masses, cerebrovascular events, or white matter disease. However, the ESR was markedly elevated at 90 mm/h (normal, less than 30 mm/h). Rheumatological examination revealed slight fever (temperature, 37.6°C [99.7°F]); reduced range of motion in neck, shoulders, and hips, that was associated with proximal muscle pain in those regions; bilateral inflammation of the bursae in the shoulder and hip regions; tenderness of the upper arms and thighs; and slight swelling of the hands and feet. The only other abnormality was “mild tenderness and reduced pulse over the temporal regions, bilaterally.”

There was no point tenderness in the trapezius area, the fat pad of the knee, or at the lateral epicondyle of the elbow. No muscular weakness was evident. There were no neuroophthalmic findings (no diplopia or field cuts) or evidence of cranial nerve involvement. The rest of the neurologi-cal examination was unremarkable. A 4-week trial of duloxetine (30 mg bid) produced only modest improvement in mood.

There is evidently a significant inflammatory process going on here, as the elevated ESR shows. I would wonder about rheumatoid arthritis or some related condition. The tenderness over the temporal region also raises the question of temporal arteritis. The pain and depression this patient has experienced are probably secondary to systemic illness, although she may also have unresolved issues regarding the breakup of her relationship. I would defer pharmacological treatment at this point to the rheumatologist.

The differential diagnosis of PMR, GCA, and fibromyalgia is not easy because the boundaries of these conditions are not clear. Indeed, rheumatologists often engage in the kind of debates that psychiatrists may associate with schizophrenia and bipolar disorder (for example, how “real” are the conditions in question, and what distinguishes them from other disorders?). Whereas there is general agreement among rheumatologists that PMR and GCA are closely related conditions, the nosological status of fibromyalgia remains controversial. Some experts believe it is part of a syndromal continuum that includes PMR5; others see fibromyalgia as part of a group of affective spectrum disorders (ASDs).3,6,7 ASDs may include, among other conditions, major depressive disorder, obsessive-compulsive disorder, irritable bowel syndrome, and migraine.6 What is not in dispute, however, is the high comorbidity of PMR and fibromyalgia, on the one hand, and anxious-depressive mood symptoms, on the other. There is also no debate over the urgency of diagnosing GCA because a failure to do so may lead to blindness.8,9 Some of the main defining features of PMR/GCA and fibromyalgia are shown in the Table.

The present case demonstrates the dangers in assuming that because psychosocial antecedents are present in a patient’s history, the patient therefore has a psychosocial disorder. Given the patient’s traumatic breakup and highly conflicted relationship with a graduate student, it is understandable that one might diagnose an adjustment disorder with somatic features, AD, or a somatoform disorder of some type.

While this line of reasoning proved fallacious in the present case, it is nevertheless true that psychosocial precipitants are believed to play a role in certain pain disorders, including fibromyalgia.6 Indeed, Bradley6 goes so far as to state: “Fibromyalgia is generally considered to be a stress-related disorder characterized by abnormal functioning of the hypotha-lamic-pituitary-adrenal axis, such as the inability to suppress cortisol.” Abnormalities in cortisol secretion and diurnal rhythm have been described in major depression for decades. Recently, depressive symptoms in PMR have been linked with elevated levels of prolactin, perhaps as a result of abnormally high levels of serotonin in the hypothalamus.10 The meaning of this finding is not yet clear because basal prolactin levels in major de-pression are usually normal11; however, it raises the question of a serotonin connection in PMR and clinical depression.

In the present case, a critical piece of information was the markedly elevated ESR. Although often dismissed as too nonspecific to be of much help, an elevated ESR may open the gateway to the consideration of inflammatory disease. Rheumatoid arthritis or polymyositis are inflammatory diseases that may be confused with PMR/GCA.8 The patient’s complaints of shoulder, head, and jaw pain were also crucial in making the diagnosis. In a patient with depression, it is easy to dismiss such pain complaints as “somatizing” or “depressive equivalents.” Here, however, the patient’s headache and jaw pain were probably direct results of temporal and facial artery inflammation, respectively.

Treatment of PMR/GCA with the use of corticosteroids is often successful; however, corticosteroids may themselves provoke depression or mania and again lead to psychiatric consultation.8