This article provides a practical framework that can guide consultation-liaison psychiatrists through solving problems of capacity and informed consent. 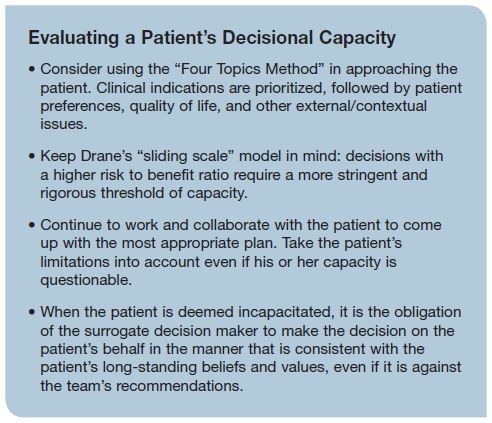 Although not always formally trained in ethics, consultation-liaison (C/L) psychiatrists and psychosomatic medicine physicians who practice in general hospitals frequently see cases laden with ethical questions. In a 2006 survey of members of the Academy of Psychosomatic Medicine, the majority of respondents reported that management of bioethical dilemmas had a significant effect on their work; capacity evaluation and informed consent made up the majority of the issues.1 In fact, evaluation of the patient’s decisional capacity is one of the most common consultation requests in acute hospital settings. In such situations, the primary team and other hospital staff (eg, case manager, social worker) often look to psychiatry to provide the recommendations that can affect the patient’s course of treatment and outcomes.

This article provides a practical framework that can guide C/L psychiatrists through solving problems of capacity and informed consent.

The 4 cardinal principles of biomedical ethics-autonomy, beneficence, nonmaleficence, and justice-are widely accepted as standard ethical principles in medicine.2 The conflict between autonomy and beneficence/nonmaleficence often leads to distress among health care professionals, as well as patients and their families, and frequently manifests in psychiatric consultations for evaluation of the patient’s capacity to make medical decisions or to refuse recommended treatment. This is especially true when the clinician feels strongly about the need to intervene to maximize outcomes but the patient disagrees. Although the clinician turns to capacity evaluations to address his or her own discomfort and distress, the true underlying moral dilemma stems from the conflict between a patient’s autonomy and the physician’s paternalism.3

• Ability to communicate a choice

• Ability to understand information necessary for the specific decision at hand

Wright and Roberts6 advocate the use of the “Four Topics Method”7 to help with ethical decision-making strategy for patients in a medical setting. With this algorithm, each case is analyzed through 4 aspects:

Two typical cases that might arise are presented in the case vignettes. They describe relevant ethical dilemmas and their formulations, and demonstrate how a C/L psychiatrist can work through each case using the “Four Topics Method.”

Ms A is a 73-year-old with diabetes, hypertension, and end-stage renal failure. She is receiving hemodialysis and has had above-the-knee right lower extremity amputation. She is brought to the hospital after a fall. This is the third similar presentation to the hospital during the past 2 months.

The evaluation reveals malnutrition, dehydration, and early-stage bedsores. Ms A is evaluated by a social worker and a physical therapist; both recommend a skilled nursing facility as the most appropriate placement for her. However, the patient fervently refuses this option, and psychiatry is called in to evaluate her capacity to make decisions.

Ms A is found to be alert and fully engaged, with bright affect and a linear and goal-oriented thought process. She explains that she has been independent her entire life and that she values her independence very much. She states that she “would rather die than live anywhere else rather than [her] own home.” She understands that she is in poor health but is willing to engage additional services at home to address any health concerns. If that isn’t enough, she “would rather go home and suffer the consequences than be placed in a nursing home.”

The C/L psychiatrist finds that although the hospitalist and associated clinicians believe that Ms A’s decision is poor and places her at high risk for recurrent complications and readmission, Ms A has the capacity to make decisions regarding her discharge. The team is advised to work closely with the patient to maximize her supports at home.

This case demonstrates a common conflict between a patient’s autonomy and the physician’s duty and drive to provide beneficence. Physicians often feel overprotective of patients when confronted with what they feel are unsafe decisions. They begin to question the patient’s decisional capacity. Paternalism exists when a physician believes that he knows better than the patient what is in the patient’s best interests and places the patient’s medical good above all else.3 However, it is the physician’s responsibility to respect the patient’s values and to understand the impact of medical and psychosocial interventions, keeping in mind the patient’s particular cultural/attitudinal context. It is important to continue to closely work with the patient to find the best solution, even if the work is distressing, because the physician feels that the patient is making the wrong decision.

In other cases, the patient’s capacity may indeed be impaired, especially when there is evidence of impairment of “executive autonomy” (from cognitive, functional, or physical deficits). This is often seen in the management of patients with chronic conditions, especially if they are elderly. In such cases, treatment nonadherence as well as home safety issues may arise.

The elderly person with multiple medical problems and mild cognitive dysfunction who can tell the doctor what she needs to do to stay safe and be healthy but frequently ends up in the hospital because she forgets to take her medicines and has problems taking care of herself is a typical case. While the patient can indicate her preferences and generally has good understanding of the plan, there is clear evidence that executive function impairment interferes with her ability to complete the needed tasks. The element of “voluntariness” comes into play as a consequence of the internal impairments that inhibit goal-directed actions, thus rendering the patient incapacitated.8

Mrs B, a 55-year-old with end-stage heart failure who has a pacemaker/implantable cardioverter defibrillator (ICD), is admitted to the hospital for failure to thrive. Since receiving her pacemaker/ICD a year ago, Mrs B has come to believe that this device is harming her. She reports significant pain from the device and wants it removed. In fact, she repeatedly tells her cardiologists that she wants to have the pacemaker/ICD taken out. She would prefer to switch to alternative medicine approaches to treat her heart failure.

Mrs B became so passionate about her beliefs that it caused significant fallout between her and her husband and children who opposed her views. She firmly believes that they want to harm her, and she has asked them to move out. A C/L psychiatrist is called to evaluate Mrs B’s decision-making capacity.

Mrs B insists that the only solution to her distress is the removal of the device, and she is not willing to consider or discuss any other options. The psychiatrist finds that she has delusional disorder; she is offered an antipsychotic, which she declines.

Mrs B is believed to have, at most, a few months to live. Her cardiologists think that turning off the ICD would be appropriate and in fact preferable to avoid unnecessary and highly distressing shocks (as well as unnecessarily potentially prolonging/preventing natural death). However, the removal of the device is contraindicated because of the potentially harmful effects of surgery; moreover, the pacing activity has been helping to make the patient comfortable.

The C/L psychiatrist decided that Mrs B lacks capacity to make medical decisions and that her family is an appropriate surrogate decision maker. Mrs B’s family consents to turning off the ICD device, but the pacemaker is left intact. Because of the poor prognosis and poor response to antipsychotics, it is thought not to be in the patient’s best interests to seek psychiatric hospitalization and/or administration of antipsychotics against Mrs B’s will.

This case demonstrates the complexity of a capacity evaluation. While on the surface the patient appears delusional and it is tempting to dismiss the patient’s preferences as completely irrational, it is important to elucidate and take into consideration the patient’s long-standing beliefs and values to make the most appropriate decision for a patient who lacks decisional capacity.

In Mrs B’s case, discussions with her family made it clear that she had actually had long-standing beliefs regarding minimal interventions and holistic approaches. She consented to the pacemaker/ICD implantation when she became very sick a year ago, but then her previously held beliefs solidified into such rigid structures with false premises that they became delusional.

However, it was also important to take the patient’s long-standing beliefs and values into account while making decisions on her behalf. Although currently her values crystallized into psychotic beliefs, her lifelong-held values supported minimal intervention. Thus, with her impending death, it was thought most appropriate to minimize interventions and to arrange for home hospice care, making her comfort and dignity a priority. This translated into turning off the ICD device, minimizing the number of medications for her heart condition, and not pursuing psychiatric interventions.

As elegantly stated in a paper by Naik and colleagues,8 “Effective treatment planning may be achieved through a dynamic, iterative process of identifying patients’ limitations, tailoring appropriate interventions, and supplanting deficits of executive autonomy with adequate supports. This approach can occur in the chronic longitudinal setting as well as at discharge planning after an acute intervention.”

Psychiatrists who practice in medical settings are often asked to provide not only psychiatric recommendations but also suggestions on the ethical issues involving medical/surgical patients. Familiarity with the core ethical principles and ethical decision-making strategies (Sidebar) will help the clinician deliver high-quality care grounded in the principles of medical ethics.

Dr Sher is an instructor in the department of psychiatry and behavioral sciences, Stanford University and attending psychiatrist on the psychosomatic medicine service at Stanford Hospital, Stanford, Calif. Dr Lolak is Associate Professor in the department of psychiatry at The George Washington University and Director of Psychiatric Consultation Service at The George Washington University Hospital, Washington, DC. The authors report no conflicts of interest concerning the subject matter of this article.

1. Bourgeois JA, Cohen MA, Geppert CM. The role of psychosomatic-medicine psychiatrists in bioethics: a survey study of members of the academy of psychosomatic medicine. Psychosomatics. 2006;47:520-526.