Secondary causes for psychosis are more common in older adults (65 years or older) than in younger patients. Here are 6 possible culprits.

(This is the second article in a series discussing psychotic disorders in late life. The first installment appeared in the August issue, pages 16-17. —Ed)

Psychosis in late life may result from any of an array of different illnesses with varied etiologies. Indeed, available evidence indicates that secondary causes for psychosis are more common among older adults (65 years and older) when compared with younger individuals.1 It is also necessary to distinguish between late-onset schizophrenia (LOS), very late–onset schizophrenia-like psychosis (VLOS), and early-onset schizophrenia (EOS). Having an appreciation of these possible etiologies is important, as this information will help with early identification and treatment of these disorders.

Cognitive decline, poor health status, visual impairment, and negative life events have been identified as risk factors for the development of psychotic disorders among older adults.2 Older age of onset for schizophrenia is known to be associated with female gender, a lower family history of schizophrenia, lower rates of substance use, better early psychosocial functioning, higher educational attainment, and a greater number of comorbid physical health problems.3 For LOS and VLOS, female gender appears to be a prominent risk factor.4 Additional risk factors for VLOS are more abnormalities in brain structures, family history of schizophrenia or avoidant personality, paranoid or schizoid personality disorder, hearing loss, being from an immigrant population, or having a lower socioeconomic status.1

Delusional disorder. The prevalence of delusional disorder is approximately 0.03% in this population.17 Individuals with this condition can have normal cognitive, personal, and occupational functioning, but significant social dysfunction.

Depressive and bipolar disorders (affective psychosis). Among older adults, the incidence of affective psychosis is approximately 30.9 per 100,000 person years.11 Older patients with bipolar disorder have more paranoia when compared to younger adults, and delusions are present in 45% of older adults admitted to hospitals for depression.18,19 Older adults with psychotic depression also have a higher prevalence of comorbid anxiety and somatic symptoms.20

Delirium. The prevalence of psychotic symptoms among individuals with delirium is approximately 42.7%.24 Visual hallucinations occur in 27%, delusions in 25.6%, auditory hallucinations in 12.4%, and tactile hallucination in 2.7%.24 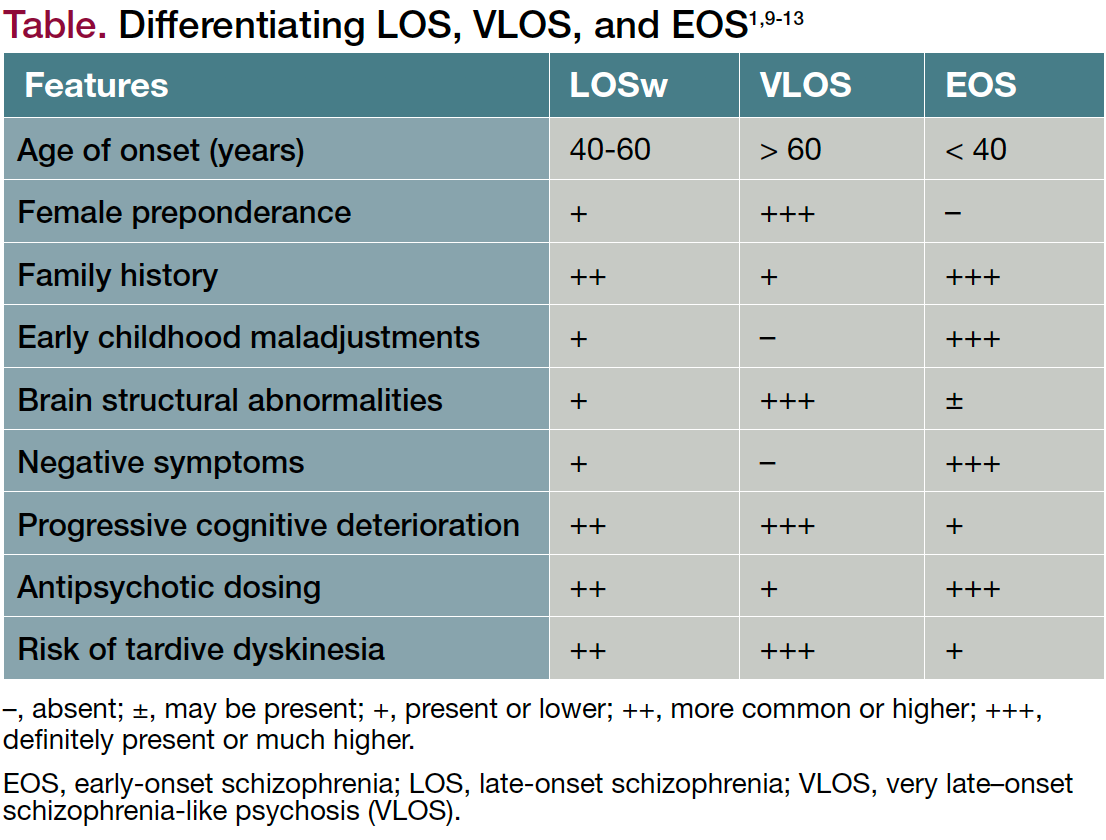 The risk for developing secondary psychosis due to drug use, environmental toxins like lead or mercury and medical illness is greater among older adults due to comorbidities, polypharmacy, and sensitivity to drugs.25

When it comes to patient background and risk factors, there are significant differences between LOS, VLOS, and EOS (Table).1,9-13

It has been noted that LOS is associated with a genetic variant indopamine D2 receptor (DRD2), rs2734839.26 Additionally, individuals with LOS appear to have larger thalamic volumes and abnormalities in white matter integrity when compared with individuals with EOS.27-29 Individuals with LOS also present with reduced cerebral blood flow in both postcentral gyri when compared with individuals with EOS who present with reduced blood flow to the precentral gyrus and inferior frontal gyrus.30 Older adults with delusional disorders appear to have larger lateral ventricular volumes than older adults with schizophrenia and almost twice those of age-matched controls.31

Psychosis in late life is not uncommon, with secondary causes of psychosis being more prevalent than primary psychotic disorders. Among older adults who present with psychotic symptoms, a thorough history, the evaluation of risk factors, and conducting an appropriate work-up that includes neuroimaging studies and neuropsychological testing for complicated cases will result in early identification of the etiologies and prompt treatment of these symptoms.