Each Native American tribe has a specific history, traditions, customs, and culture, and knowing something of these will help build the physician-patient relationship. 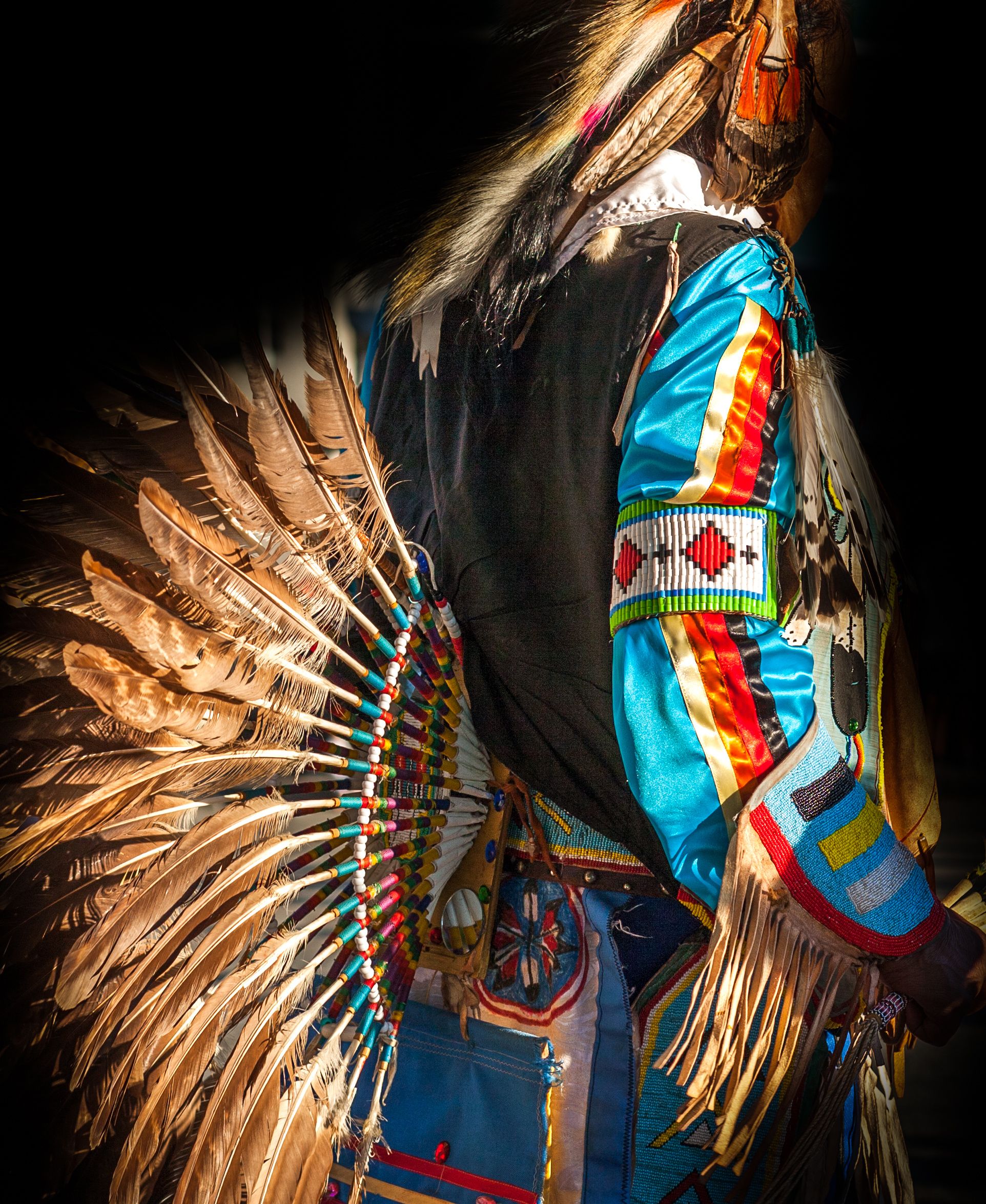 It is easy to be overwhelmed with the remarkably complex circumstances when considering American Indian and Alaska Native (AI/AN) communities across the United States and the mental health issues and needs of these tribes and/or individuals. Each tribe has a specific history, traditions, customs, and culture, and knowing something of these will help build an understanding of how mental health problems develop and how they are expressed. In addition to learning about a patient’s tribe, gathering a personal history takes time and effort. Issues of poverty, violence, survival, family morbidity and mortality, alcoholism and drug problems, suicide, racism, and historical trauma are often a part of their story.

It might be tempting to start a problem list and then formulate a treatment plan, as has been done so many times before in Western medicine, but what are the issues in need of treatment? What are the odds of a treatment plan resolving the problems? What is the patient’s home environment? It is important to take time to think about the AI/AN communities and why chronic illnesses beset their lives. A historical review sheds light on the causes of behavioral health issues and other chronic medical problems.

From Part 1 of This Special Report

The Epitome of Humanity

The AI/AN population is a heterogeneous group of 574 federally recognized tribes with 324 reservations in the United States. Further, there are 63 state-recognized tribes in 11 states,1 and more than 200 tribal groups without any government recognition.2 As of 2019, the collective AI/AN population was estimated to be 6.9 million individuals, about 2% of the total US population. The AI/AN population is spread across different regions, with 78% living outside identified tribal areas, 22% on reservations or other trust lands, and 60% in metropolitan areas. The Native population is significantly younger than that of non-Hispanic Whites.3 The Figure shows a county breakdown of where AI/AN lived according to the US 2010 Census. 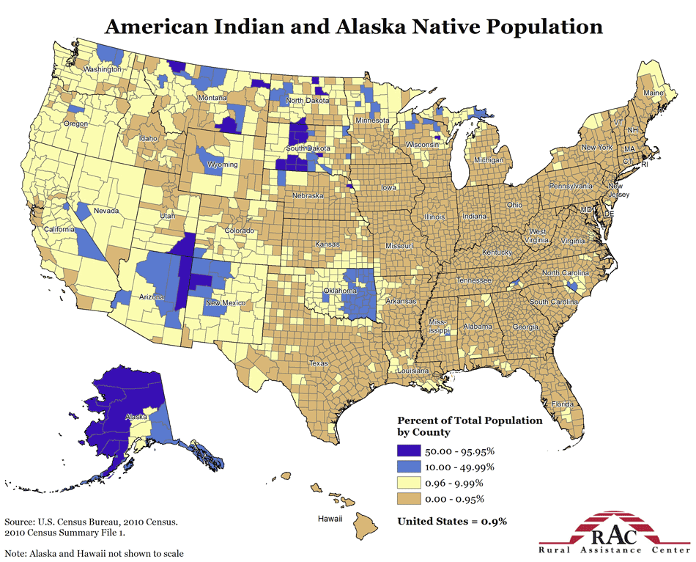 Although vast improvements have been made over the past 20 years, including as part of federal agency efforts, AI/AN people still have a high prevalence of behavioral health problems and limited access to care relative to the overall US population.

The State of Mental Health of Black Women: Clinical Considerations

The Human Development Index (HDI) uses collective data on life expectancy, education, and income to measure improvement in individuals’ lives. In a critical paper7 comparing well-being among major US ethnic groups, the HDI reported large gaps. The AI/AN group is lowest in wage earnings and second lowest in both education and life expectancy. Taken together, these findings give AI/AN the lowest Health Index in the United States. The AI/AN population is the only group that had negative improvement over the past 10 years. According to 2018 US Census data, the highest poverty rate by ethnicity is found among AI/AN at 25.4%; the White non-Hispanic rate, by comparison, is 10.1%.7

According to data from the Indian Health Service and the Office of the Surgeon General, AI/AN individuals experience serious mental health disparities when compared with the overall US population. Higher rates of addictions, depression, anxiety, and suicide exist. Historical trauma, racism, poverty, inadequate education, unemployment, discrimination in the delivery of health services, and cultural differences coexist with the morbidity and mortality findings for this population.4 These observations suggest that social and economic issues connect with mental health problems and affect treatment outcomes (Table 1).8 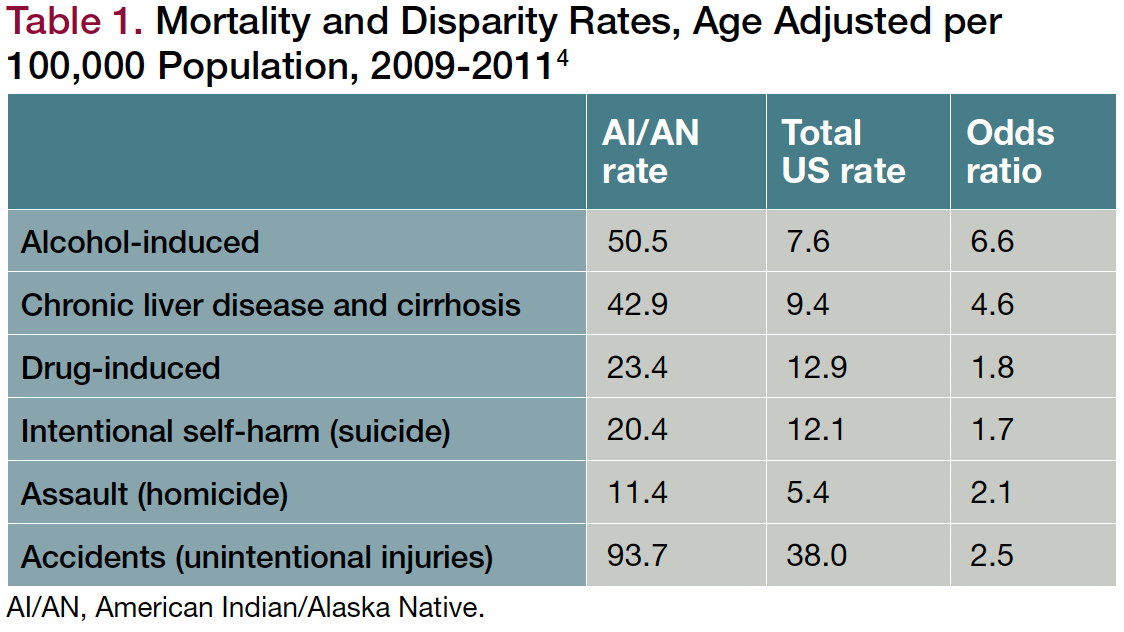 What has caused these disparities? Considering the events since the first contact of AI/AN with European explorers and colonizers gives a start in understanding the interrelationship between chronic health issues and social determinants. First, we can look at a series of papal bulls directed to leaders of European monarchies, which encouraged taking possession of lands and Native people in the Americas. The first bull by Pope Nicholas V was issued in 1452 to the Portuguese monarchy, asking Portugal to declare war on all non-Christians worldwide and endorsing conquest, ownership, colonization, and slavery of all non-Christian nations and territories. Forty years later in 1493, shortly following the first voyage of Columbus to the Americas, Pope Alexander VI issued the bull “Inter Caetera” or “The Doctrine of Discovery” to the Spanish monarchy, which gave Spain and Portugal the “right” to vanquish, colonize, convert, and enslave all non-Christian peoples and lands. Ultimately, all European monarchies used these papal bulls as justifications to control lands in the New World.9

As the colonies became independent, they modified their governments to incorporate the message of 1493’s papal bull. When the United States declared its independence in 1776, it retained the British right of discovery and also assumed Britain’s power of dominion. In 1823, the US Supreme Court unanimously adopted the theme of the Doctrine of Discovery into federal law, observing that Christian European nations had assumed “ultimate dominion” over the lands of America during the “Age of Discovery.”10 American Indians, therefore, lost their right to complete sovereignty and retained a right to occupy only certain lands. This Supreme Court decision allowed the Federal government to ignore the rights of American Indians and to claim that the non-Christian lands of America rightfully belonged to, first, the “discovering” Christian European nations, then, subsequently, to the US federal government. Indian nations were deemed “domestic dependent nations” that were subject to the federal government’s absolute legislative authority. Between 1778 and 1871, the United States signed 368 treaties related to land cession with various tribes.10

The Doctrine of Discovery and later Manifest Destiny became the underlying themes for a multitude of negative events affecting indigenous peoples across North America. Tribes were decimated by warfare, disease, ethnic cleansing, and genocide. AI/AN peoples also experienced forced relocation and boarding schools, restrictions of cultural activities, prohibitions on use of their own language, and historical trauma.11 While the Doctrine of Discovery has been rescinded in many churches in the last 2 decades, it is still in place with the Catholic church, and its repercussions echo today. 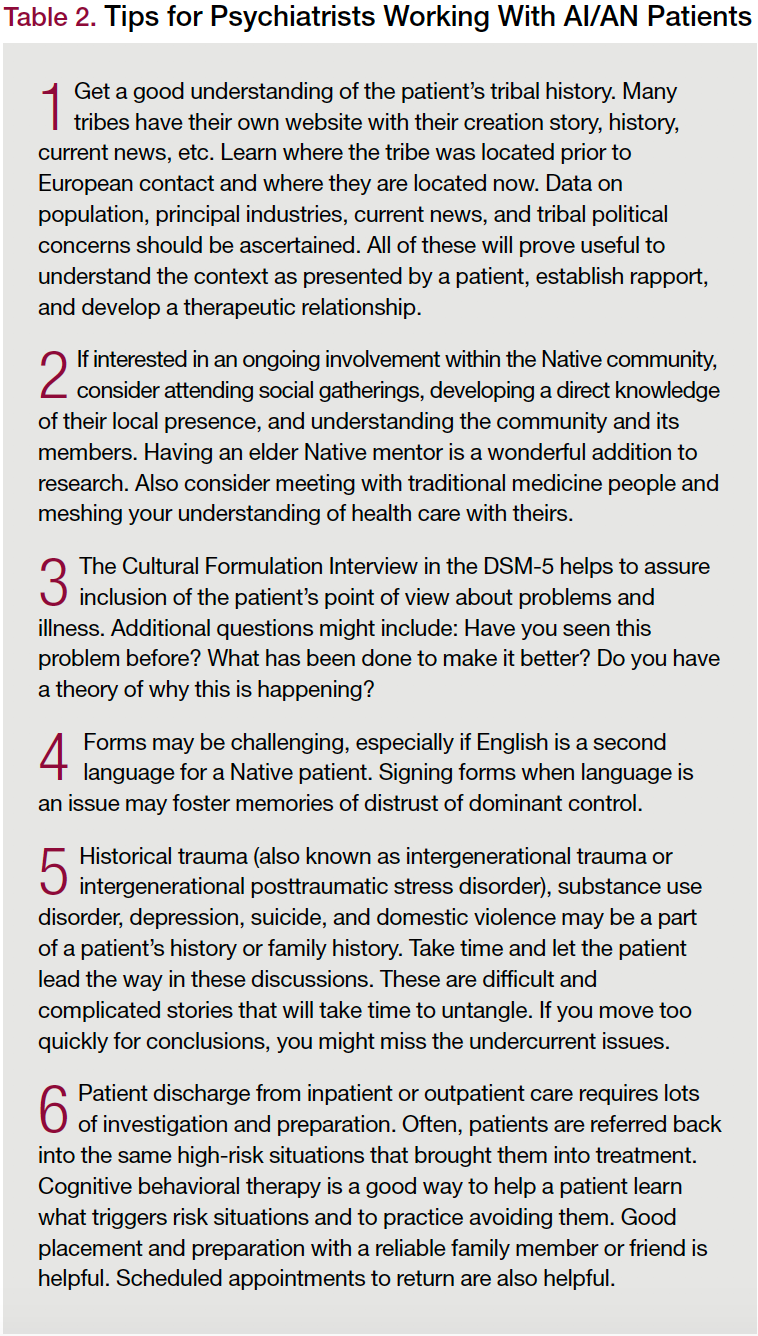 In a series of studies beginning in the late 1960s and continuing to the present, Sir Michael Marmot, PhD, has pursued the impact of social, economic, and political determinants upon various populations. His work in the World Health Organization concerning Indigenous peoples suggests that health care systems need to 1) promote improved education, 2) promote expanded vocational support and improved working conditions, 3) promote healthy living conditions and adequate housing, 4) give every child the best start in life, 5) advocate to establish an income necessary for a healthy life, and 6) pursue the causes of ill health.12 The chronic health illnesses in AI/AN peoples are directly influenced by social, economic, and racial conditions over 5 centuries. Even today, the social and economic conditions in which many AI/AN people live create a negative impact on their morbidity and mortality.13

AI/AN peoples are different from each other and different from the rest of the US population. A long history of social, cultural, and economic struggles has contributed to their increased morbidity and mortality. It is time to address the long-term problems in conjunction with chronic mental health illnesses (Table 2). An integrated partnership with patients and the Native community, focusing on health equity, will go a long way in improving the social determinants of health for this special population. Psychiatrist participation in the process will help us grow in our understanding of the problems, enrich the therapeutic process, and improve treatment outcomes.

Dr Walker is professor of psychiatry emeritus and director of the One Sky Center for American Indian and Alaska Native Behavioral Health at Oregon Health and Science University. His current work draws attention to best practices for the prevention and treatment of addiction and mental health disorders in American Indian populations. 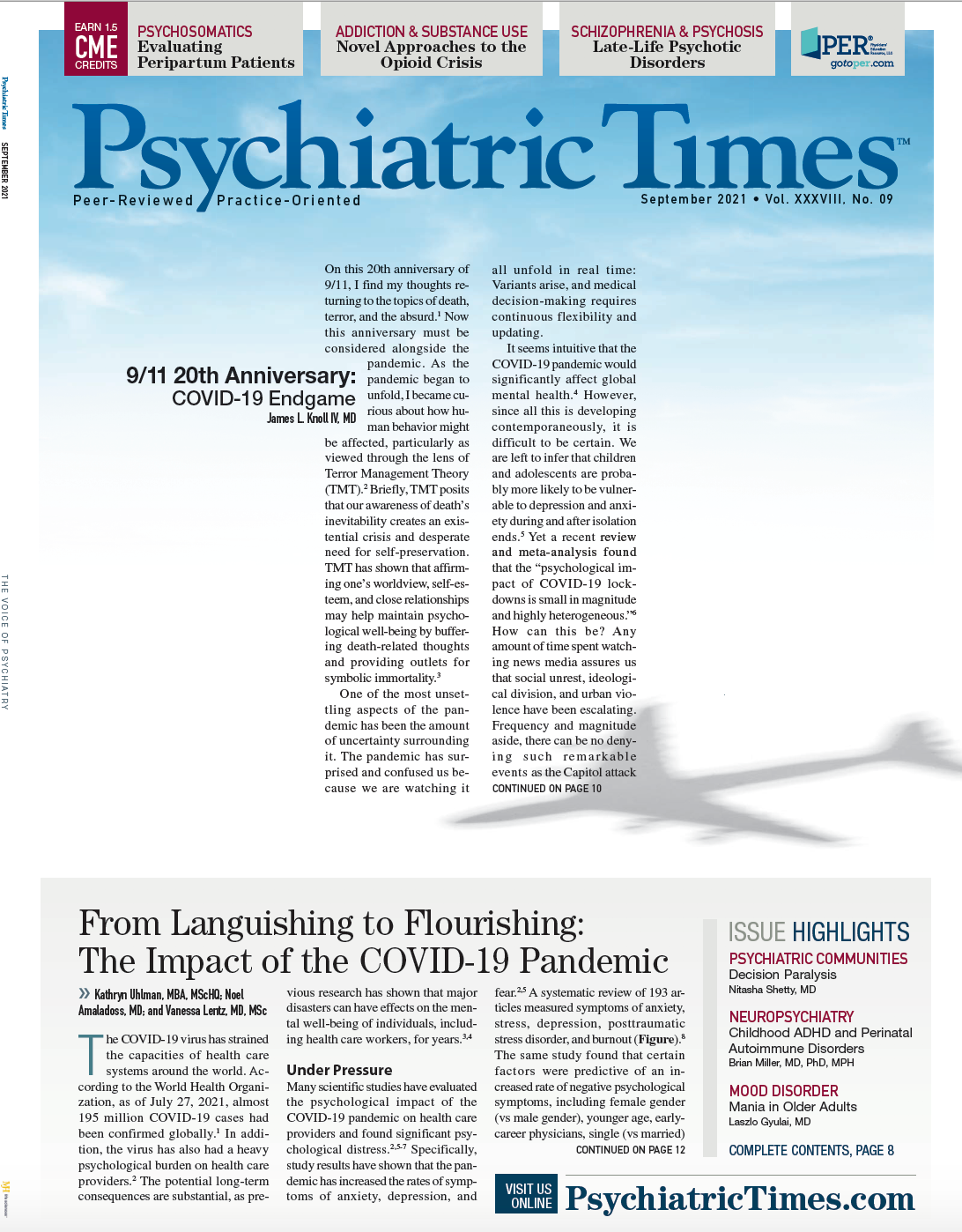 Issues for Psychiatrists: Challenges Facing American Indian and Alaska Native Patients
The State of Mental Health of Black Women: Clinical Considerations
Could Childhood ADHD Have Its Roots in Perinatal Autoimmune Disorders?
What Do I Do Now? Making Decisions in a Postpandemic World
A Generation in Crisis?
Treating Mania in Older Adults With Bipolar Disorder
Inclusivity: Ensuring Patients Who Are Plus-Size Feel Welcome
Art Imitating Life: A Poet’s Words
Fraternity Paddle
Harnessing Harm-Reduction Methods to Combat the Opioid Crisis
Exploring Possible Etiologies for Psychotic Disorders in Late Life
Psychiatric Evaluation of the Peripartum Patient
Reflecting on Trauma
Turning Over a New Leaf
From Languishing to Flourishing: The Impact of the COVID-19 Pandemic
Related Videos
Related Content