This overview addresses two medications for analgesia of chronic benign pain, both of which have substance abuse risks themselves. 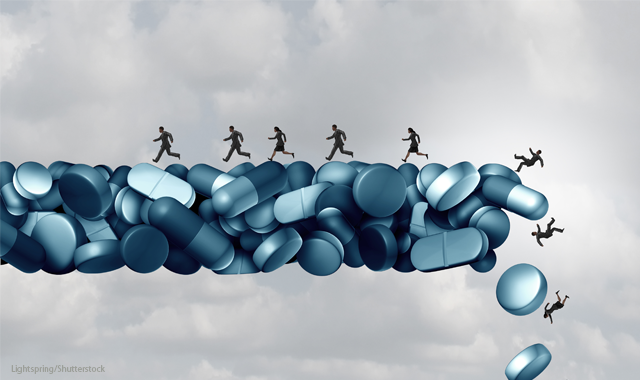 Patients on opioids for chronic pain management develop common complications that respond best to discontinuation and consideration of alternative pharmacotherapies, often in combination with behavioral interventions. A presentation at the October 2019 Psych Congress in San Diego covered these chronic opioid complications in detail. This overview addresses two medications for analgesia of chronic benign pain, both of which have substance abuse risks themselves-cannabinoids and ketamine.

Cannabinoids are associated with complications in terms of their use, potential for abuse, and administration. Without concurrent opioids, cannabinoids’ efficacy as an analgesic is poor; and 10% of people who use tetrahydrocannabinol (THC) become addicted to it.1,2 In addition, the cannabinoids, particularly cannabidiol (CBD), can potentiate the efficacy to, and reduce tolerance to, opioids. This brief overview focuses on CBD, because data and legal regulation have been rapidly progressing for its potential role in chronic pain management both within psychiatric and primary care settings. Furthermore, all 50 states have laws legalizing CBD with varying degrees of restrictions, and many people obtain CBD online without a medical cannabis license or physician prescription.

Although we do not know the most effective therapeutic dose of CBD for pain, some preliminary estimates are available, such as the 5mg/kg twice-daily dose of Epidiolex for treating two rare seizure disorders.5 Moreover, we can compare analgesic effects using the number of patients needed to treat (NNT) for a clinically significant therapeutic effect. Tricyclic antidepressants and opioids have the lowest NNT for treating neuropathic pain (2.6 and 2.1, respectively).6,7 This NNT means that for every single patient showing a therapeutic response to each of these agents, we need to treat 2.6 patients and 2.1 patients for tricyclics and opioids, respectively. Perhaps more simply, one of every two patients treated with opioids will have satisfactory analgesia from chronic neuropathic pain. In comparison, an oral CBD spray was found to have an NNT of 5.0, which is comparable to many routine agents used in treating neuropathic pain, including SSRIs (NNT=5.0) and gabapentin (NNT=6.4).8,9

It is also important to look at the negative aspects of treatment. A meta-analysis of 18 double-blind, randomized controlled trials on CBD efficacy analyzed the harms associated with CBD. They found that the number needed to harm (NNH) with CBD, which ideally would be high, was instead relatively low. For CBD, the NNH ranged from 5 to 8 patients, while other analgesics have NNH values above 20.10-12 Specific adverse events contributing to the poor value for NNH included impaired motor function (NNH=5), altered perception (NNH=7), and altered cognitive function (NNH=8). Thus, assessing the efficacy of CBD must be balanced against the potential for harm in the management of neuropathic pain.

The CBD oral solution Epidiolex is available in the US for management of refractory epilepsy, but it has been used off label for chronic pain conditions.5 GW pharmaceuticals also produce nabiximols, which is a marijuana extract currently approved in the UK to treat neuropathic pain, pain due to spasticity, overactive bladder, and other symptoms associated with multiple sclerosis. GW Pharmaceuticals is currently planning Phase 3 trials for nabiximols in the US.6,13,14 Thus, these medications are likely to become available in FDA-approved formulations at doses that have potential analgesic efficacy in the not too distant future.

The role of ketamine for chronic pain is more complex, including the setting for delivery. However, ketamine use for chronic pain could be adopted within the specialized psychiatry settings that the new REMS (Risk Evaluation and Mitigation Strategies) programs are mandating for esketamine to treat depression.3,4

Ketamine might best be considered among the antidepressants that have consistently shown efficacy for chronic pain in conditions such as peripheral neuropathy, diabetic neuropathy, phantom limb pain, and patients with depression and pain.15 The relative efficacy of antidepressants based on NNT follows the efficacy of opioids, which has an NNT of 2.1, as previously noted. In comparison, the NNT for similar opioid alternatives are as follows: 3.6 for tricyclic antidepressants; 6.4 for serotonin- norepinephrine reuptake blockers; 7.2 for gabapentin; and 7.7 for pregabalin. However, the onset of full efficacy for opioids is rapid (and usually only a few minutes after oral ingestion), while these other medications typically take six to eight weeks for full efficacy as analgesics.

In contrast to the slow onset for these antidepressant and related agents, ketamine for chronic pain has shown surprisingly quick and long-lasting results. Ketamine has obvious acute analgesic efficacy, and sustained infusions of ketamine over one to 100 hours have produced sustained analgesia for months after these single treatments.16,17 Specifically, one study found substantially reduced chronic neuropathic pain after 30 minutes of ketamine infusion at 0.5 mg/kg, but this relief only lasted several hours in some patients. A second set of studies using 100-hour infusions of ketamine at 20 to 30 mg/hour or 4-hour daily infusions for 10 days relieved pain for three months, but relief started declining by four to six weeks after the acute treatments. Overall, these ketamine studies showed large effect sizes in the first week following treatment (1.2; P<.001), but by week four, the effect sizes dropped to 0.4 (although they remained statistically significant at P=.04). Unfortunately, these reports are five to 10 years old, and there are not more recent reports. Similarly, there are no studies using the newly available intranasal formulation of esketamine, which would make the administration easier than the previous intravenous studies.

These ketamine studies have some important caveats:15,16,18,19

• There was no improvement in functionality with analgesia from ketamine.

• Cognition and memory impairment may be persistent with longer duration or more frequent administration; and no long-term data exist.

• Ketamine has negative inotropic effects on the heart and can produce elevated liver functions with repeated dosing.

• Less serious side effects include drowsiness and dizziness during repeated treatment (about one-quarter of patients reported these symptoms).

• Dissociation and abuse are potential psychiatric complications from even a single administration of ketamine.

Chronic pain continues to be a hot button issue, and psychiatrists need to be aware of non-opioid options, especially for their patients with substance use histories. Both ketamine and CBD are on the horizon as new treatments for chronic pain. Since both have risks for inducing substance use disorders, their use needs to be considered cautiously.

2. National Academies of Sciences, Engineering, and Medicine. The Health Effects of Cannabis and Cannabinoids: The Current State of Evidence and Recommendations for Research. January 12, 2017. http://nationalacademies.org/hmd/reports/2017/health-effects-of-cannabis-and-cannabinoids.aspx. Accessed October 8, 2019.