Off-Label Prescribing of Antipsychotics for Youths: Who Should Be Treated?

This article focuses on appropriate versus inappropriate use of antipsychotics, the importance of careful assessment, and the consequences of not treating. 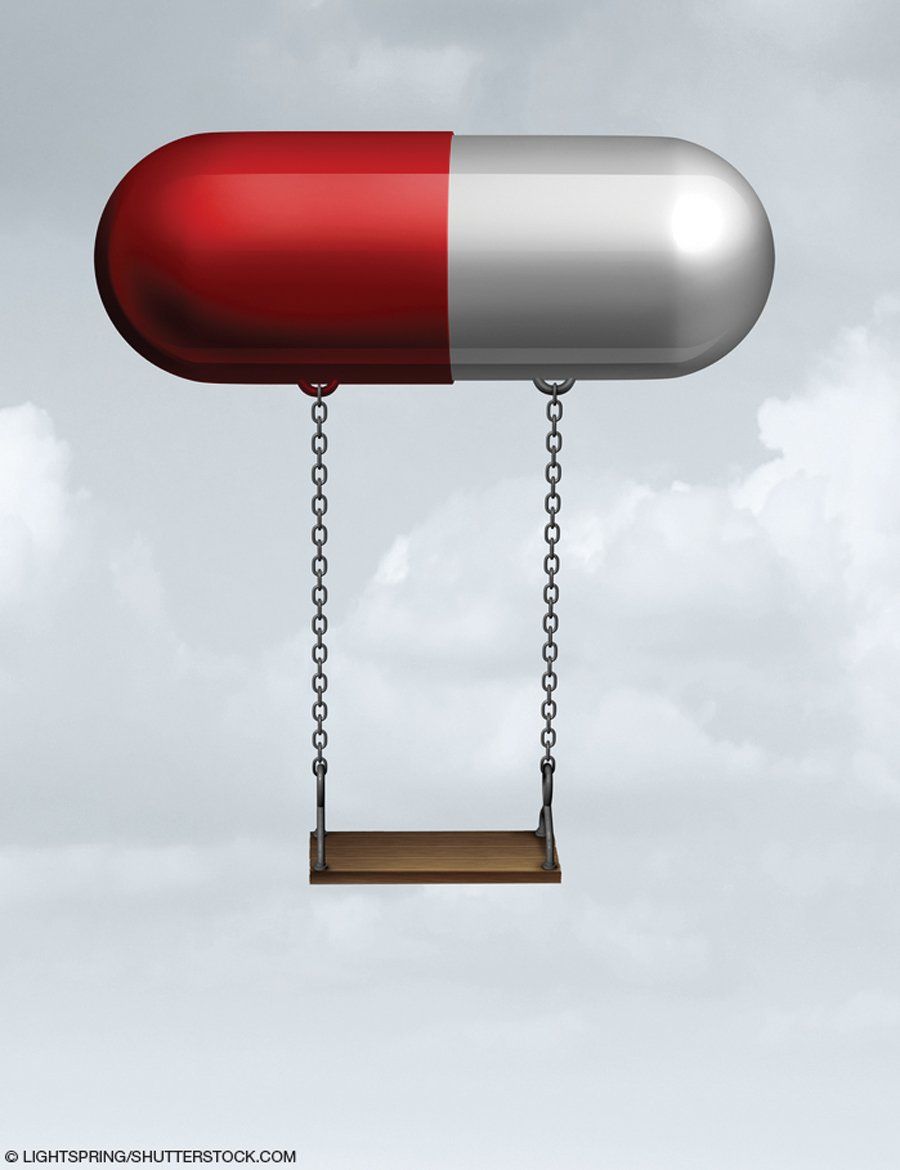 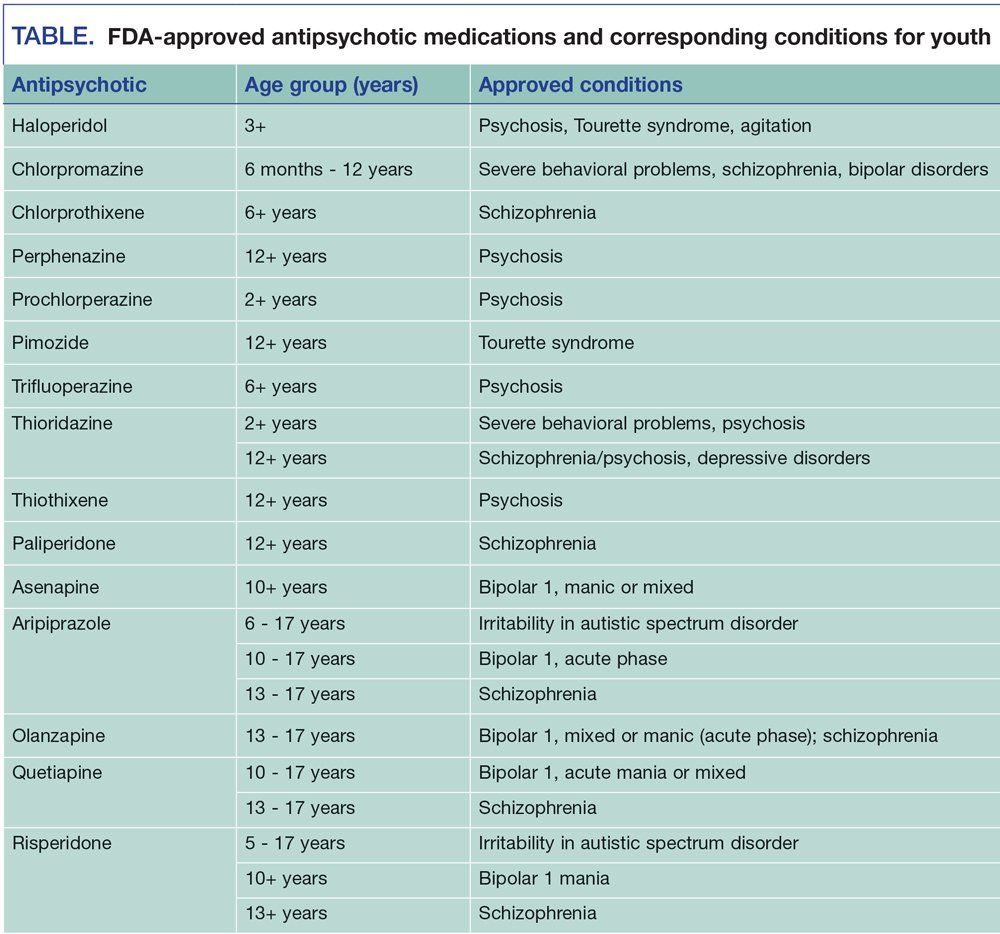 In recent years, treatment options for several child and adolescent psychiatric problems have increasingly relied on antipsychotic medications. The rise in prescriptions for youths has generated public and professional concern over the appropriate role of pharmacology in child psychiatry. Criticism is seen in mainstream media and in discussions of restricting off-label use of psychiatric medications. These concerns center on adverse effects of medications, high rates of prescribing, and off-label prescribing. Implicit is an assumption that antipsychotics have no treatment role outside of their FDA-approved indications (Table).

However, findings in neurobiology and clinical trials support off-label use of antipsychotics for treatment of impulsivity and aggression in youths. To correctly utilize this knowledge, physicians need a strong understanding of the evidence-based literature that supports off-label antipsychotic prescribing. In addition, physicians must understand the issues surrounding unsupported off-label prescribing. This knowledge will guide and inform diagnostic evaluation and decision-making toward appropriate prescribing practices.

This article focuses on appropriate versus inappropriate use of antipsychotics, the importance of careful assessment, and the consequences of not treating.

The concern that antipsychotic prescribing in youth is inappropriate outside of FDA-indicated conditions is understandable. The nomenclature “antipsychotic” suggests it is for patients who are psychotic, and the lack of an FDA indication for a condition is often conflated with a lack of evidence. In fact, off-label prescribing is a central and common source of treatment throughout medicine, particularly psychiatry.

Several clinical trials of risperidone have demonstrated reductions in the reoccurrence of disruptive behavior symptoms and aggression in youth.1-4 The evidence for risperidone in the treatment of youths with conduct problems and disruptive and aggressive behaviors was found to be of high quality.5 Moreover, antipsychotic antagonism of dopamine (D2) and serotonin (5-HT2a) receptors has been linked to reductions in aggressive behavior.6,7

Severe aggressive and disruptive behaviors in youths are a common pathway for antipsychotic treatment. Families, physicians, and educators frequently describe the behavior of these youths as unruly to the point of being unsafe, violent, and disruptive to their academic goals.

However, the severity and urgency should not preclude thoughtful clinical evaluation. The following Case Vignette illustrates supported treatment.

Jonathan is a 13-year-old with a history of ADHD and oppositional defiant disorder who was sent from school to the pediatric emergency department (ED) for verbal and physical aggression toward peers at school. He has been hospitalized before for similar issues, and this is his third visit to the ED in the past 90 days. He is accompanied by his mother who tells him, in front of the doctor, that she is “done with him.”

In private, she reports to the examining child psychiatrist that she gets calls on a near-daily basis from the school related to his behavior and is concerned he will be suspended again. She is unable to keep leaving her job in the middle of her shift to pick him up from school. She notes similar issues of aggression toward his younger siblings and doesn’t feel comfortable with Jonathan being left unsupervised with his siblings.

The family has been in parent management training and family therapy with minimal improvement. Jonathan is taking dexmethylphenidate XR 30 mg daily. The school, therapist, psychiatrist, and mother all agree that he has done best on this stimulant and at this dose. However, he continues to struggle with behavior control at home and at school. There is no evidence of untreated anxiety or any other medical conditions that could explain his behavior.

As an outpatient, Jonathan has his baseline metabolic levels measured. Risperidone 0.25 mg bid titrated to 0.5 mg bid is started while his stimulant is continued. The frequency of aggressive behaviors at home and at school decreases significantly. This allows for better attendance in class and improvement in his academic performance and relationships with peers and family.

Jonathan’s case demonstrates ongoing and serious behavior issues despite optimized treatment for ADHD symptoms. These issues are adversely affecting his academic progress, as well as his home and family life. He received multiple psychiatric evaluations that excluded underlying causes of his aggressive behavior and has had trials of other classes of medications with safer profiles. Considering a low dose of an antipsychotic as an augmentation strategy to his stimulant is appropriate at this time.

Despite evidence of clinical benefits, antipsychotics for aggression represent a symptom-based approach to treatment rather than targeting the underlying cause. At times, the symptom-based use of antipsychotics can lead to inappropriate, non–FDA-approved, and unsupported prescribing. The appearance of severe symptoms such as aggression can be disturbing to families, educators, and physicians and can lead to a sense of urgency to prescribe. This urgency to act may lead to poor diagnostic clarity and inappropriate prescribing of antipsychotics. These medications have a common adverse effect of sedation that can appear to improve sleep or even anxiety. The following Case Vignette illustrates an unsupported scenario.

Sam is an 11-year-old who is currently on the child inpatient psychiatric unit. He was admitted after becoming physically aggressive at school when he stood on a table in the computer lab and starting picking up keyboards and throwing them while screaming. This is his third admission to the child inpatient unit in the past 2 years for similar episodes at home and in school.

He had been taking risperidone 0.5 mg bid for nearly 2 years at the time of this admission. There is no evidence of poor adherence to his medication. His parents report that risperidone has helped in managing his tantrums and outbursts but has not entirely resolved them. The resident treating him notices he is regularly on the unit phone with his family in significant distress because he misses them and is not able to attend an upcoming holiday event. He also appears to become particularly dysregulated as visiting hours end and his family leaves.

Further evaluation by the resident provides a diagnosis of separation and generalized anxiety disorders. Sam’s history reveals that risperidone was started 2 years earlier after there was no improvement in symptoms following parent management training. No other psychiatric medications, psychosocial interventions, or therapies were tried.

The risperidone is stopped, an SSRI titrated to a high dose is started, and Sam is placed with a cognitive behavior therapist for anxiety. Three months after these changes, his family reports only rare aggressive tantrums and outbursts.

Sam’s case illustrates unsupported and inappropriate prescribing. This boy was prematurely given an antipsychotic medication because of the severity and urgency of his presentation but without adequate evaluation for alternative causes of his behavior. Sam actually has severe anxiety and is prone to externalizing aggressive behaviors in the context of distress. While an antipsychotic might improve some of his impulsive aggression, it does not address his underlying anxiety. An SSRI combined with evidence-based psychotherapy represents a more targeted treatment with a better safety profile and risk-to-benefit ratio.

Risks of treating and not treating

The literature is full of valid and well-established safety concerns about antipsychotic medications. Atypical antipsychotics have metabolic effects-most notably, weight gain and extrapyramidal effects-and these adverse effects are more likely to manifest in youths. While there is evidence of their net benefit in aggression and severe behavior dysregulation, there is also a lack of long-term safety data regarding these medications’ effects on CNS development. All of these concerns are valid and should be considered when atypical antipsychotics are prescribed for off-label use.

While there are valid concerns about the unsupported use and long-term risks of antipsychotics, the risks and consequences of not treating are equally important. Untreated, impulsive aggression and severe behavior dysregulation affect youths at home and school as well as interpersonally. These youths frequently miss classes because of behavior problems and subsequently have poorer academic performance-and may even be suspended or expelled. More serious consequences can include physical aggression and outbursts that lead to arrest. Relationships with parents and siblings suffer as families lose patience with these outbursts (Case Vignette 1).

Peer relationships are difficult to maintain because the youth is perceived as impulsive, unpredictable, and unstable. As a result, the youth’s self-esteem progressively worsens. The impact of these events suggests long-term reductions in functioning and achievement as well as a possible increased risk of other psychiatric disorders, such as depression, anxiety, and substance abuse.

Supported off-label treatment with antipsychotics for disruptive behaviors is evidence-based and necessary to prevent adverse long-term outcomes for youths. Conversely, unsupported off-label use can be tempting for physicians because of the urgency of the clinical situation, but these medications have established adverse effects, which should not be dismissed.

Moving clinical practice toward supported off-label antipsychotic use is grounded in thoughtful, thorough, and complete diagnostic evaluation. This idea may appear straightforward and lacking in novelty; however, the literature shows community practice prescribing of antipsychotics for unsupported off-label indications, such as nonspecific mood or anxiety and sleep problems.8,9

Primary use of antipsychotics in youths for sleep or anxiety (Case Vignette 2) is concerning and unsupported, as it lacks a body of evidence to support the practice. More importantly though, there are alternative treatments available that are more specific and better tolerated than antipsychotics.

Avoiding these situations can be difficult given the climate of limited health care resources, shortened visits, and poor availability of nonpharmacological treatments. Regardless, physicians should continue to strive for diagnostic clarity and optimization of etiology-based treatments, particularly when considering off-label antipsychotic treatments in youths. For example, in presentations such as sleep disturbances, physicians should investigate the underlying cause and treat that first. Perhaps the sleep problem represents poorly treated depression or anxiety. Which treatments can address these symptoms?

In another situation, if ADHD with aggression is a primary diagnosis, consider whether the stimulant has been optimized. Have both methylphenidate and an amphetamine salt compound been tried and nonstimulant or nonpharmacological treatments been considered? If these efforts have failed, antipsychotics may ultimately have a role.

Treatment of youths with severe behavioral disturbances with antipsychotics can be an example of supported, evidence-based off-label prescribing, assuming there is a clear understanding of the underlying diagnosis or diagnoses and any complicating factors such as family systems issues. At that point, a thoughtful and balanced discussion can be held about the risks and benefits of prescribing an antipsychotic versus the risks and benefits of not prescribing. This approach to off-label antipsychotic prescribing in children will lead to fewer cases of unsupported, poorly targeted treatments in which a safer alternative was available.

Dr. Sultan is a Practicing Child Psychiatrist and Research Fellow at New York-Presbyterian Hospital and Columbia University College of Physicians and Surgeons in New York.