Lamotrigine is an important option in bipolar disorders. However, many clinicians also use it in patients with a (unipolar) depressive disorder who have not responded adequately to conventional antidepressants. 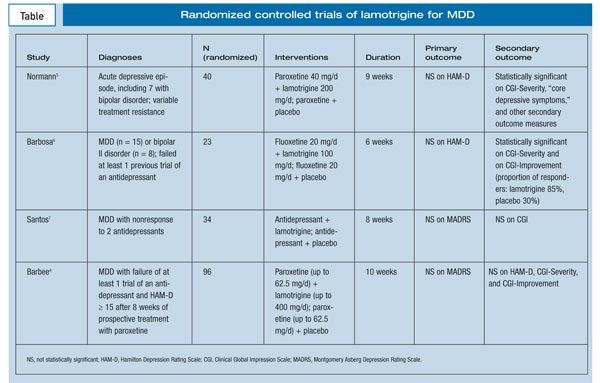 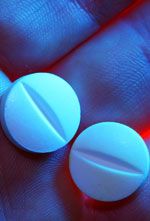 Lamotrigine is an important medication option for the treatment of bipolar disorders. However, many clinicians also use it in patients with a (unipolar) depressive disorder who have not responded adequately to conventional antidepressants. That several retrospective chart reviews of such use have been published indirectly indicates that such “off-label” use is not infrequent.1-3 However, is such use scientifically justified?

Tip:Case reports, case series (including “chart reviews”), and uncontrolled, open-label clinical trials are useful and important for preliminary assessment of the efficacy of a treatment, especially to guide further research, but are not true evidence that a treatment works and should not usually lead to change in regular clinical practice.

Studies without randomization, a control group, and double blinding are subject to a series of biases that frequently lead to positive results, a high proportion of which are subsequently disproven or at least not verified (Mago, Lane, and Mahajan, 2009, unpublished data). The history of medicine is littered with treatments that were thought to work based on considerable clinical experience or uncontrolled studies but were later shown to be ineffective.

Tip:In assessing the evidence for efficacy of a treatment, much time will be saved and many errors prevented if strong consideration is given to results of double-blind, randomized, controlled trials (RCTs), rather than to other types of research, when deciding whether to change clinical practice.

This is not to say that RCTs do not have limitations or may not be biased in any way, but only that conclusions that can be drawn from studies without a control group, randomization, and blinding are definitely much more limited.

A systematic search of MEDLINE found 4 published RCTs of the use of lamotrigine for MDD (see Table), all of which used lamotrigine as an add-on to an antidepressant. However, 2 of these studies included patients with bipolar disorder, making them potentially misleading.

Tip:Despite some similarities and overlap between MDD and bipolar disorders, there are important differences in their response to many available treatments. Therefore, efficacy studies should ideally not combine unipolar MDD and bipolar disorder patients. In such cases, look to see whether data on one of the subgroups can be extracted independent of the other, without which the results for the unipolar and bipolar patients analyzed together are very hard to interpret.

None of these RCTs found the addition of lamotrigine to the anti­depressant to be superior to the addition of placebo on the primary out-come measure. Since statistical significance is based on probability, doing many statistical tests on the same data is like tossing a coin until one gets a desired outcome. If you get one chance to toss a coin, there is a 50% chance of getting a “heads.” However, this is no longer true if you have 2 or more tries. The cutoff of P < .05 means that there is less than a 5% chance that these results could have been obtained by chance alone if there was, in fact, no difference between the two groups. However, this cutoff assumes that only one statistical test was done. The more statistical tests, the more likely it is that one of these tests will be positive just by chance.

The largest and most methodologically sound study was that by Barbee and colleagues.4 One reason for this was that they not only considered patient report of failure to respond to an antidepressant but also first prospectively treated these patients with paroxetine alone. Only patients whose Hamilton Depression Rating Scale score was 15 or greater after 8 weeks of taking paroxetine alone were randomized to addition of lamotrigine or placebo. The wisdom of this approach is supported by the fact that nearly half of the patients in whom paroxetine monotherapy was started improved enough to not make it to the randomized phase.

Tip: If a study does not find a statistically significant difference, an important question to ask is if the study was adequately powered (ie, if it had a sufficient number of patients to detect a meaningful difference if one had existed).

Before the start of their study, Barbee and colleagues had calculated that 90 subjects who were in the double-blind phase would provide enough statistical power to detect an expected difference between the groups. Therefore, the study was not underpowered.

On the basis of currently available evidence, clinicians are urged to not prescribe lamotrigine for MDD. If a detailed and thorough clinical evaluation finds no specific evidence of bipolar disorder (mania or hypo­mania) in a particular patient, it is not appropriate to prescribe lamotrigine for that patient, since there is no evidence that that particular patient has bipolar disorder.