Never Quite as It Seems: An Apparently Chance Association May Explain a Lot About Schizophrenia

How frequently do you find yourself prescribing antibiotics for inpatients with schizophrenia and related psychotic disorders during hospitalization? 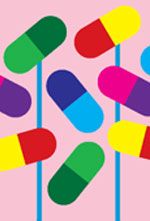 How frequently do you find yourself prescribing antibiotics for inpatients with schizophrenia and related psychotic disorders during hospitalization? While working as a psychiatrist on our acute care inpatient unit, I asked myself this question and came up with an (anecdotal) answer of, “For somewhere between 1 of 5 and 1 of 3 patients.”

I had treated patients with comorbid urinary tract infections (UTIs), cellulitis, and occasionally, upper respiratory tract infections (URIs). The more I thought about my answer, I was struck by 2 observations: (1) I have diagnosed schizophrenia and comorbid UTI in males, but the combination is more common in females; and (2) some patients with comorbid infections had relapsed despite good adherence with medications and in the absence of other specific psychosocial stressors. For these patients, psychosis often improved following antibiotic treatment for the infection, often without need for changes in psychotropic medications.

In my clinical training, I had learned to screen vigilantly for UTIs in geriatric patients with psychosis in the context of dementia or delirium. But it turns out that my simple clinical observation is backed up by quite an intriguing literature regarding infections and schizophrenia.

Prenatal maternal viral and bacterial infections1 and childhood viral encephalitis2 are risk factors for psychotic disorders. Infection with Toxoplasma gondii is highly prevalent in patients with first-episode psychosis.3 In patients with schizophrenia, there is also an increased prevalence of HIV infection and infectious hepatitis.4 Importantly, schizophrenia is also associated with increased mortality from all infectious diseases, including pneumonia and influenza.5

Our research team explored whether the association between UTI and acute psychosis extends to patients with primary psychotic disorders. Even with my clinical experience of treating comorbid UTIs on the acute care inpatient unit, the results were striking. In a sample of 57 acutely relapsed inpatients with DSM-IV schizophrenia, 35% of the patients (38% of females and 28% of males) had a UTI on admission, detected by urinalysis and urine microscopy.6 After controlling for effects of gender and smoking status, our patients with schizophrenia were almost 29 times more likely to have a UTI than controls. By contrast, there was no association with UTI between a sample of 40 stable out­patients with schizophrenia and 39 controls. Furthermore, only 40% of the UTIs in acutely relapsed inpatients in our study were recognized and treated with antibiotics during hospitalization.

For clinicians, this association raises the possibility of infections as a potentially modifiable risk factor for relapse in schizophrenia. Acute psychotic relapse is common and relapse prevention represents an important treatment issue in schizophrenia. Illness relapse is associated with adverse outcomes, including increased treatment-resistant symptoms, cognitive decline, and functional disability. Given the myriad of associations between schizophrenia and infections, this relationship appears to be more than just a “chance” finding, and it may be relevant to the pathophysiology of illness relapse. Our findings also highlight the potential importance of monitoring for comorbid infections in acute inpatients with schizophrenia, because fewer than half of the UTIs in our study were recognized and treated during hospitalization. Untreated infections pose an increased risk of morbidity and potentially increase the duration of hospital stay.

What are the next steps? Of course, the association between acute psychosis and UTI needs to be replicated in larger patient samples. In our study, we did not diagnose UTIs according to the gold standard of urine culture results in symptomatic patients. Findings from a previous study indicate that more than half of patients with delirium and comorbid UTI were asymptomatic: thus, it is possible that impairments due to acute psychosis could interfere with accurate reporting of urinary symptoms.7

You may well ask, “What are the underlying mechanism(s) for this association?” Acute psychosis may be associated with decreased self-care or other behaviors that could increase risk of UTI. Alter­natively, UTI might precede and be a precipitating factor for acute psychosis. Given evidence for abnormal immune function in schizophrenia, the host inflammatory response to infection might trigger relapse in susceptible patients. Our research group is currently investigating potential links between immune parameters and UTI in acute relapse of schizophrenia.

Beyond illness relapse, hospitalization for schizophrenia also appears to be a critical window in which to recognize and modify mortality risk (Table). Infections in our schizophrenic patients should truly be viewed as “life-shortening.” Adding further concern to this issue is that the mortality gap for patients with schizophrenia may actually be increasing over time.

A recent study compared the mortality of all people in England discharged from inpatient care with a diagnosis of schizophrenia with mortality in the general English population from 1999 to 2006; significantly increased mortality rates were found in the patients with schizophrenia.8 Perhaps the most striking finding in that study was that the absolute risk of death within 1 year of inpatient care for schizophrenia was about 1.5%.

Another recent English study found that hospitalization for schizophrenia is associated with a greater than 2-fold increased risk of lo- bar pneumonia; this risk remained high for years after discharge.9 However, the proportion of patients with comorbid pneumonia at the time of psychiatric hospitalization for schizophrenia in this study was not reported. An additional challenge is that even when comorbid infections are recognized, patients with schizophrenia are less likely to receive standard levels of care, and so infections not addressed during hospitalization may be undertreated or may go unrecognized altogether.10 Nevertheless, targeted interventions must be developed to reduce the burden of infectious disease morbidity and premature mortality in this patient population. Potential interventions during hospitalization might include screening for infections such as UTIs, HIV infection, and hepatitis when clinically indicated, as well as pneumonia and influenza vaccination programs.

Indeed, infections in patients with schizophrenia are a serious public health problem. Our patients appear to be especially vulnerable to in­fections, which affect morbidity throughout the lifespan and premature mortality. However, through renewed awareness of these associations; vigilant monitoring for and treatment of comorbid infections; and other targeted interventions, such as vaccinations, we as clinicians can help eradicate some of this burden and improve the quality and quantity of life for our patients.

1. Brown AS, Derkits EJ. Prenatal infection and schizophrenia: a review of epidemiologic and translational studies. Am J Psychiatry. 2010;167:261-280.