Television, tablets, gaming, phones: how are they impacting child and adolescent mental health? 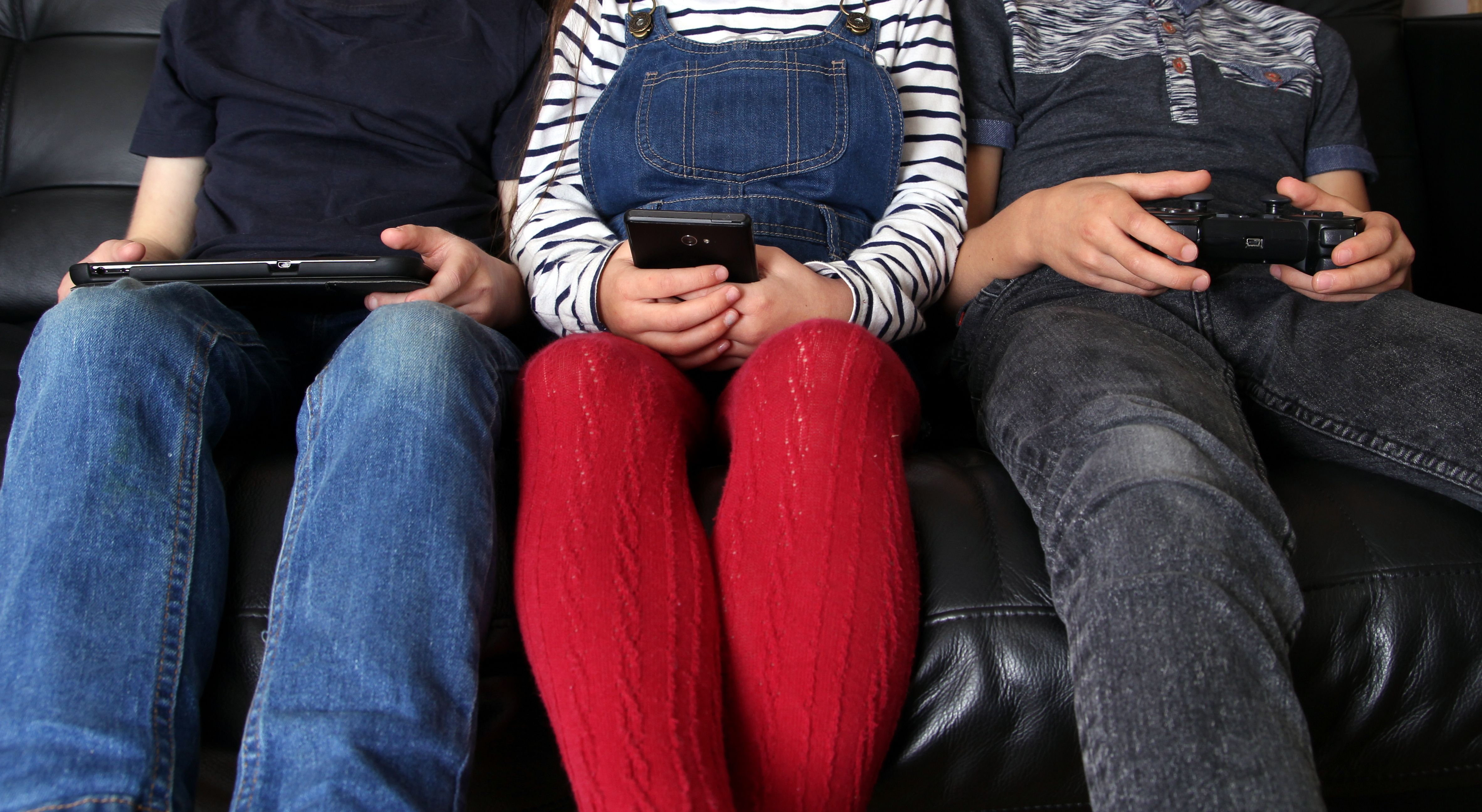 Spending time watching television, engrossed in a game on a tablet, glued to a gaming console, or messaging friends with a smartphone have become quintessential recreational activities of children and adolescents.1 Screen media activity (SMA) consumes about 40% to 60% of after-school time,2 and nearly 97% of US youth have at least 1 electronic item in their bedroom.3 However, SMA is highly diverse and continues to change over time.4 For example, over the past 4 years, the percentage of young individuals who say they watch online videos “every day” has more than doubled from 24% to 56% among 8- to 12-year-olds, and increased from 34% to 69% among 13- to 18-year-olds. Moreover, 70% of boys (aged 8 to 18 years) say they enjoy playing video games “a lot,” compared with 23% of girls aged 8 to 18; while 73% of girls say they enjoy listening to music “a lot,” compared with 59% of boys.

Considerable debate has emerged regarding the relationships between SMA and psychological and social problems.5,6 Internalizing and externalizing7 symptoms are important aspects of youth mental health that signal the potential emergence or presence of significant psychiatric concerns. Internalizing problems are characterized by withdrawal and may include depression, anxiety, and somatization. Externalizing problems refer to behavioral issues such as impulsiveness, rule-breaking, and aggressiveness.

Reviewing the literature, Zink and colleagues8 reported that some types of SMA were associated with internalizing symptoms but not others, such as watching television. Others reported that high social media use was associated with more depressive features, panic symptomatology, delinquent behaviors, and family conflict, and lower levels of family and friend support,9 which is consistent with the observation that using social media for more than 3 hours per day was associated with internalizing problems.10 Greater SMA has been associated with decreased sleep duration, increased sleep onset latency, excessive sleepiness, insomnia, and overall sleep disturbance symptom severity.11 In a recent systematic review of reviews, those individuals who engaged in more SMA, and especially television-related SMA, reported higher energy intake, poor diet, obesity and adiposity, and poorer quality of life (Table).12 In the same review, general SMA was moderately related to depression, except for social media use, which demonstrated a weak association. 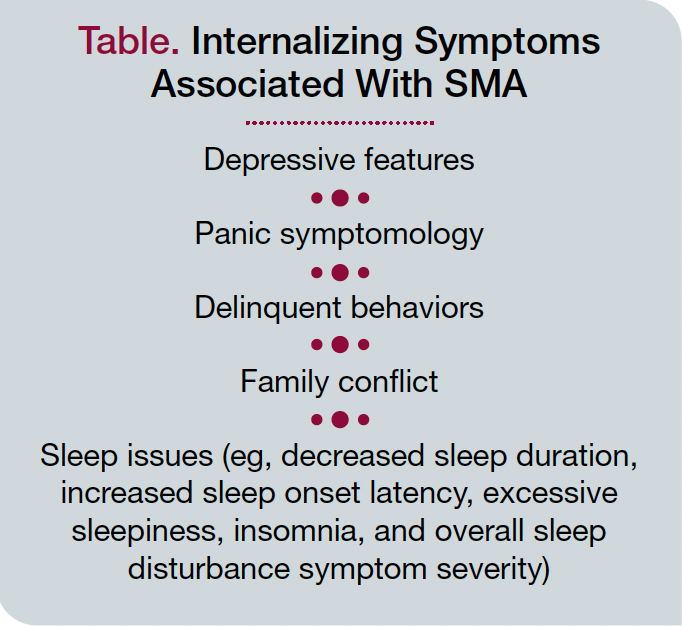 At the same time, there was weak evidence for relationships between SMA and behavioral problems, anxiety, hyperactivity, inattention, low self-esteem, poor well-being, and psychosocial health. Authors found that there was insufficient evidence for associations between SMA and eating disorders, suicidal ideation, cardiovascular risk factors, asthma, or pain. The investigators concluded that there is limited (ie, weak) evidence that small amounts of daily screen time are not harmful and may have some benefits.

In considering these studies, it is important to step back and ask what we know and how we know it. To date, most research focused on SMA utilizes surveys or cross-sectional study designs, which provide some interesting information but cannot resolve causality or the directionality of relationships. In other words, we do not know whether mental and physical health issues precede and drive SMA-related behaviors, or if SMA behaviors result in mental and physical symptoms. Moreover, SMA among youth is not isolated behaviorally; it occurs in the context of other ongoing activities, experiences, and conflicts, and within a particular scaffold of relationships with family members, peers, and friends.

To truly determine whether SMA leads to any adverse mental health consequences, a controlled trial that randomizes youth into groups allowed to engage in SMA vs those not allowed would be needed. Obviously, such a study is impossible to do ethically and practically. Thus, we rely on data that can only approximate whether SMA is causally related to mental health problems.

The Adolescent Brain Cognitive Development (ABCD) study is a diverse, multisite, multilevel assessment cohort of 11,878 participants aged 9 to 10 years at entry that may provide such insight; the study is now in its 5th year. Given the diverse group of young participants and the longitudinal study design, it is possible to begin to examine the impact of SMA over time. However, the publicly available data are currently providing only a 2-year follow-up window and include participants aged 12 and younger, which limits the inferences one can draw currently about long-term influences of SMA.

Perhaps even more exciting, ABCD participants undergo both structural and functional magnetic resonance imaging, which—for the first time—enables determination of whether SMA affects brain development. The underlying premise is that brain structure and function are highly adaptable and change in response to the types of activities in which individuals engage. Evidence from several recent studies is consistent with the hypothesis that changes in brain structure are correlated across areas with similar function that recapitulate functional networks,14 which has been termed maturational coupling or structural correlation networks (SCNs).

Recent ABCD study data suggest that cortical surface characteristics, such as thickness or gray matter volume in youth, are organized such that they form a SCN and are related to levels of cognitive function.15 We conducted an analysis to determine the relationship between brain structure and SMA.16 The SMA-related latent variables were most strongly associated with visual brain structures, such that those individuals with significant exposure to activities that engage the visual system (television or video watching, gaming, and social network activities) showed structural patterns suggestive of greater maturation in the visual system (ie, thinner cortex, reduced volume, and a more complex pattern of changes in sulcal depth). We found little evidence that SMA-related brain structure differences were associated with internalizing pathology (ie, increases in anxiety, depression, or other avoidance or withdrawal behaviors).

On the other hand, those ABCD participants with thinner occipital cortices and smaller orbitofrontal volumes, as well as thinner hippocampi and smaller inferior-temporal cortical volumes, showed greater levels of externalizing psychopathology. Based on our interpretation of these findings, SMA might be problematic for some, but not all youth, and a pattern of inadequate top-down control might be contributing to this association. However, these conclusions are far from certain, and the strictly cross-sectional nature of these analyses does not permit causal inferences. Therefore, more research will be necessary to better link SMA to brain structure or function and to delineate whether such changes are beneficial or problematic.

Given that the behavioral research findings relating SMA to mental health problems are somewhat inconsistent, mostly associative, and at an early stage, what should the take-home message be for the mental health practitioner? First, SMA is an important activity among youth; it is diverse regarding modes and methods of exposure, and technologies enabling SMA are constantly evolving. These changes in use are due in part to individual development and maturation as well as innovations in technology fields. Thus, one should assess the nature and extent of SMA use including 1) television and video watching (eg, streaming), 2) social media and related social networking activities, and 3) gaming (“On a typical day, how much time do you spend…?”). Additionally, many adolescents view pornography,17 with much viewing done on the internet, and the content of pornography on the internet has become more extreme over time.18-20 Therefore, it is essential that developmentally appropriate inquiries into pornography viewing should be done as part of youth assessment. Changes in SMA use should result in asking specific questions about the reasons and contexts regarding changes in modes, methods, and patterns of use.

Second, while SMA grossly assessed may have small effects on youth, individual impacts can be substantial given differences in types, patterns, and contexts of SMA consumption. Therefore, it is important to assess emotional impact and behavioral changes, and to evaluate whether changes have resulted in problems (“Have you noticed that you feel different after …?”). Although there may be little evidence for the displacement hypothesis (ie, that SMA outcompetes other recreational activities and/or sleep) for most youth,21 SMA may interfere with other important activities such as school, relationships, and/or recreational activities for some individuals. As a result, gaming disorder has been introduced into the eleventh revision of the ICD-11. Other forms of problematic SMA may be considered as “other specified disorders due to addictive behaviors” in ICD-11.22

Third, SMA can also be helpful by providing virtual support, maintaining a social network even during time of physical distancing, and yielding access to information that helps develop coping behaviors in difficult situations or honing skills (“In what way has…been helpful to you?”).

Assessing the evolving landscape between SMA and mental health is becoming increasingly important.23 Taken together, a thoughtful assessment of SMA should be part of a mental assessment as much as any other aspect of social or developmental history. Only then can mental health practitioners make educated decisions about whether SMA is a friend, fiend, or both for their young patients.

Dr Paulus is the scientific director and president of the Laureate Institute for Brain Research and a professor in the Department of Psychiatry at the University of California San Diego. Dr Potenza is a professor of psychiatry in the Child Study Center and of Neuroscience; director of the Division of Addictions Research; director of the Center of Excellence in Gambling Research; and director of the Yale Program for Research on Impulsivity and Impulse Control Disorders. Dr Bagot is an assistant professor in the Departments of Psychiatry and Pediatrics at the Icahn School of Medicine at Mount Sinai, New York, New York; and deputy medical director of mental health, Mount Sinai Adolescent Health Center.

5. Ferguson CJ. Everything in moderation: moderate use of screens unassociated with child behavior problems. Psychiatr Q. 2017;88(4):797-805.

22. Brand M, Rumpf HJ, Demetrovics Z, et al. Which conditions should be considered as disorders in the International Classification of Diseases (ICD-11) designation of “other specified disorders due to addictive behaviors”? J Behav Addict. 2020.