Soul and Soma: Let’s Drink (Tea) to That!

Today’s psychiatrists rarely have the luxury of time enjoyed by our fin-de-siècle forebears. So a few quick questions for the right patients can offer a big payoff. Here's a case in point. 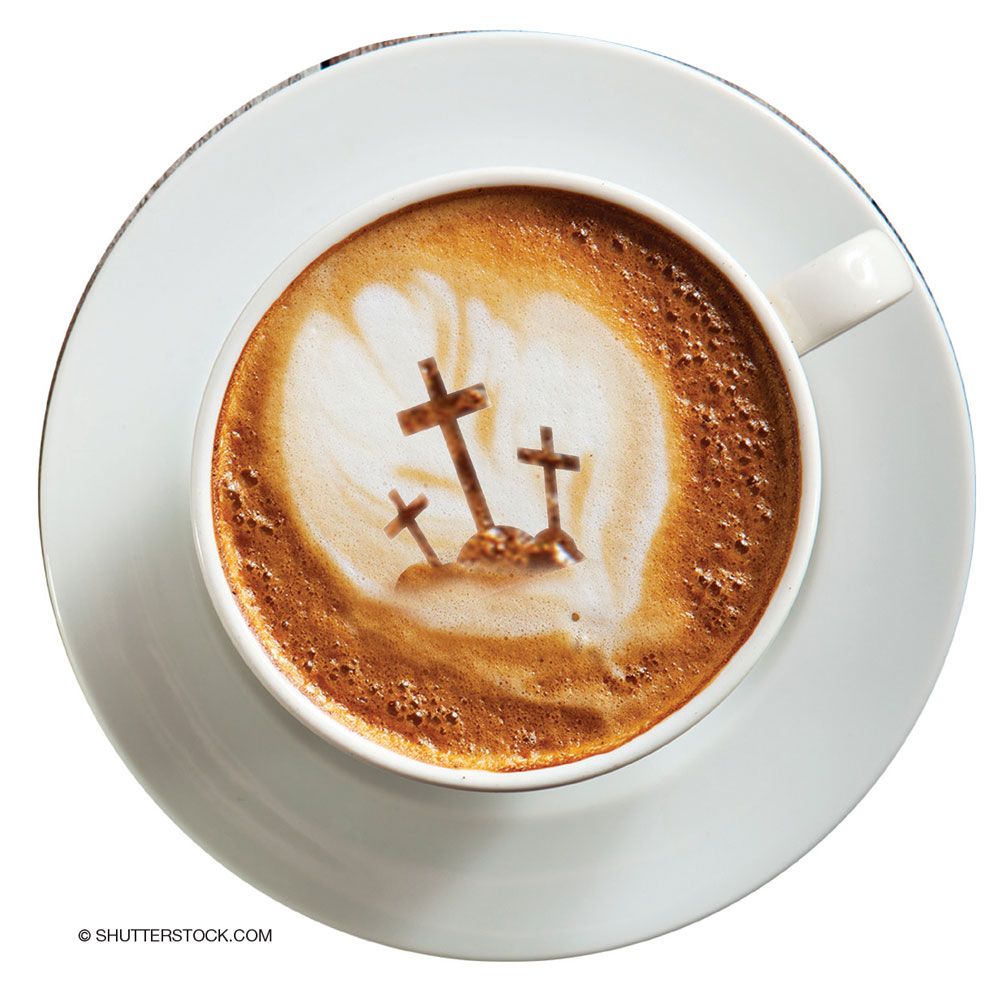 Glittering green beads rolled across the floor. Purple plastic baubles followed. Rosemarie crouched on the carpet, struggling to sweep up the spill on the waiting room floor. Were the colors less garish, I would have thought that these were Rosemarie’s rosary beads, for she carried them everywhere when her depression was worse. Yet these beads were not rosary beads. Purple and green were Mardi Gras colors, so there had to be more to the story.

I had not seen Rosemarie for a few months. At her previous appointment, she was doing so well on her antidepressants that we scheduled her follow-up for 3 months out. Although there had been a time when she came in weekly to monitor her mood and adjust her dose, her concentration eventually returned and her social life resumed. Even her alcohol intake dropped after starting medication.

In the weeks leading up to Chistmas, she had excitedly told me about the long weekend she had scheduled around Mardi Gras. She was driving down to New Orleans to meet scattered cousins. She fretted about “always being the quiet one” in her large Catholic family-but was happy to be back to “her old self.” That was what we both wanted.

Now she arrived looking haggard and complained that she felt like a deflated balloon since returning from her trip-the trip to New Orleans that she had anticipated so much. She was tired all the time, and her concentration was off. Her headaches had returned. Yet her smile was genuine, and her gushing descriptions of Mardi Gras convinced me that she had thoroughly enjoyed her trip-so much so that she carried her green and purple Mardi Gras necklace to remind her of those happy times. Happiness was not something that Rosemarie took for granted. Now the necklace was broken, and the beads had come undone. How symbolic.

My first thought was that Rosemarie had enjoyed the festivities too much, and that she had too much to drink and too little sleep and now she was tired. Rosemarie agreed-that was her first thought too, but she was concerned that her energy and focus remained so low after 2 weeks. She had already asked her primary care physician to retest her thyroid and check for anemia-but no medical reason for her fatigue was found. Her headaches were attributed to “stress.” Knowing that she was seeing a psychiatrist, her primary care physician did not press for details about relevant social habits-alcohol, exercise, and the like. Now she was asking me to increase her antidepressants, hoping for the same boost she had experienced at the start of treatment.

She assured me that she took her meds daily, even while away. Not one to take someone’s word that their alcohol intake was “minimal” or “just social,” I backtracked and asked about specifics: changes in diet, changes in exercise, changes in weather that led to less exercise, and so on. I started with questions about coffee consumption, knowing that such innocuous queries can ease into more delicate discussions about controversial and illicit substances. I sidestepped questions about cigarettes, since I knew that she detested even second-hand smoke.

In this case, the response about coffee was just what I needed. Rosemarie said that she quit coffee for Lent-which started the day after Mardi Gras. Starbucks coffee had become her passion and was sometimes her only pleasure when depressed. She consumed less coffee in the past but said that she was always a “discriminating” coffee drinker who knew good coffee from bad and chose the best. The aroma of coffee being brewed delighted her. Hearing coffee beans jumping around the grinder was music to her ears. So abstaining from Starbucks seemed like the most fitting austerity. There were days when she treated herself to 2 or 3 Vente Starbucks a day.

What a wonderful discovery! Compared with old-fashioned Greek diner coffee, served in stubby blue cups with pictures of the Parthenon, Starbucks packs 3 times the caffeine into each large serving. Large Starbucks servings should contain 330 mg of caffeine per cup, but there are wide variations in different brews, so that some Starbucks batches yield nearly 600 mg of caffeine in one cup, which vastly exceeds FDA recommended daily limits.1 No wonder she felt so fatigued since returning from Mardi Gras.

In hindsight, I wondered if her high caffeine consumption had augmented her antidepressant response, given that caffeine indirectly increases dopamine and serotonin. Some research suggests that caffeine has antidepressant effects, and some note lower suicide rates in moderate to high coffee consumers (but higher suicide rates in very high caffeine consumers).2 Until more data become available, such theories remain in the realm of “metapsychopharmacology.” But the research may be closer than we think-“caffeine culture” seems to be on the upswing. The website www.caffeineinformer.com literally lists hundreds of commercially available caffeine sources.

In spite of her fatigue and her headaches, Rosemarie would not resume coffee consumption, even in a modified form, during Lent. She refused to compromise her convictions. Medical excuses did not hold weight in Catholicism, according to Rosemarie. With a little arithmetic, we determined how much black tea could compensate for the caffeine in her coffee, so she could lower the “dose” gradually, rather than suddenly. Since Rosemarie did not like tea of any kind, she liked the idea of substituting caffeinated tea for coffee in the spirit of sacrifice. Her fatigue decreased, but it did not dissipate entirely until Easter, when she resumed drinking coffee.

Working with Rosemarie (and subsequent Internet searches), I learned a lot about caffeine; I also learned more about Lent. From that time forward, I resolved to ask patients about Lent (and about specifics of their caffeine intake). Sometimes, spiritual matters have biological components. This was a prime example of psychiatry’s bio-psycho-social-spiritual model.3 Lenten observances intrigued me: the individualized practice allows for personal choice. Those choices tell us about the values of the persons who make the choices and about their lifestyles. In contrast, traditional Jewish practices focus on the collective rather than on the individual, so Yom Kippur’s penitential prayers begin with the word “we” rather than “I.”

Many historians of psychiatry have been equally intrigued by crossovers between religion and psychiatric theories-and especially about religion and the origins of psychoanalysis. Some speculate that Freudian psychoanalysis tapped into Protestantism’s interest in the individual (along with clinical observation, Romantic philosophy, and science).4 Others attribute it to Jewish influences, while some link the confessional approach of psychoanalysis to Catholic confession, as witnessed by Freud in his native Austria.5,6 The theories go on and on, and each is intriguing.

Coffee itself has a place in religious history. Coffee was once considered controversial, if not also illicit.7 Traders from the Ottoman Empire introduced coffee to Europe, but early European coffee houses were denounced as decadent imports from the “Orient” (as the Mideast was called back then). In time, those subterranean European coffee houses became congregating places for freethinkers who questioned the authority of religion. Contrarily, as legend tells it, shepherds observed goats frolicking in the fields after nibbling on coffee beans and apprised monks. The monks then brewed the beans and prolonged their prayers via coffee.8

Today’s psychiatrists rarely have the luxury of time enjoyed by our fin-de-siÃ¨cle forebears; instead, we are often pressured to gather as much data in as little time as possible. So a few quick questions about Lent, for the right patients, can offer a big payoff (as can queries about caffeine). Those queries open windows into patients’ lives outside of the office and sometimes yield medically important information that alters clinical decision-making. Many medical diagnoses-and treatment decisions-are based on the most mundane details of daily living and need not include heroic pharmacological or procedural approaches. However, that tenet applies to all fields of medicine, and, fortunately, psychiatrists are physicians first.

Dr. Packer is Assistant Clinical Professor of Psychiatry and Behavioral Sciences at the Albert Einstein College of Medicine, Bronx, NY. She is also in private practice in New York City.

6. Ellenberger H. The Discovery of the Unconscious: The History and Evolution of Dynamic Psychiatry. New York: Basic Books; 1970.