Psychiatry in the Streets: Unique Services for People Experiencing Homelessness

The most basic human principles of humility, reliability, unwavering respect, and being kind and approachable are the most effective qualities a Street Medicine practitioner--and any psychiatrist--can have. 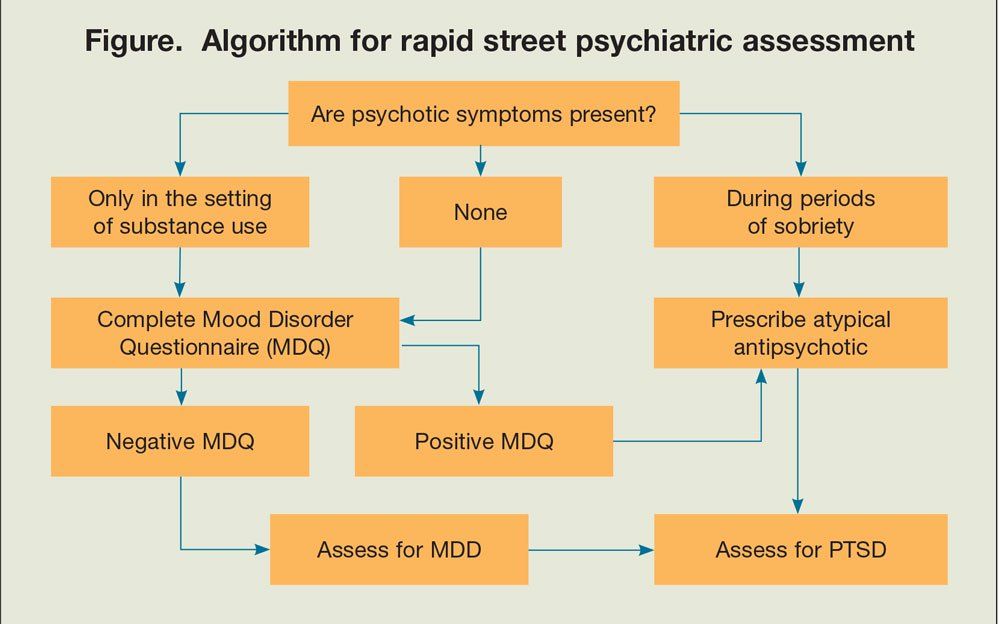 THE AMERICAN ASSOCIATION OF COMMUNITY PSYCHIATRISTS

“You guys are creeps!” Wilma seethed as the police officer assisted her into the backseat of his car. ”

Her gravelly voice echoes in my mind as I think about our Wednesday night Street Medicine rounds. Wilma, a woman known to many downtown, uniformly refused to leave her portion of sidewalk, even on the coldest of nights, determined to protect the city’s inhabitants from infectious diseases. Upon arriving at the scene, the ambulance driver was initially angry at receiving her 30th call about Wilma and lamented another expensive and fruitless check by our city’s emergency responders. The driver’s anger turned to elation, however, when I held up involuntary commitment paperwork.

The driver had been worried about Wilma and now held the power to force her to go to the hospital. I realized I had risked ruining a relationship with Wilma that freezing winter night. While I may have prevented Wilma’s death-another woman experiencing psychosis died the same night from cold exposure-I felt every bit the creep she accused me of being. On most nights our Street Medicine rounds do not involve such difficult ethical dilemmas, yet the work is always rooted in the ethos of community psychiatry.

Street Medicine, with its mantra, “Go to the people,” has gained national media attention through 2 of its prominent members, Drs. Jim Withers and Jim O’Connell. As a practice, Street Medicine is the “provision of medical care directly to those living and sleeping on the streets through mobile services such as walking teams, medical vans, and outdoor clinics.”1 This outreach tradition stretches back to the dawn of contemporary endemic homelessness, beginning in the early 1980s. Teams of professionals and workers who themselves are formerly homeless connect with people sleeping on the streets, methodically engage them, and help them obtain services, shelter, and housing.2 In no small part through Dr. Withers’s cultivation, an international movement has developed. Street Medicine practitioners have united in their passion for working with unsheltered individuals, creating the Street Medicine Institute in 2008. New programs have popped up in cities like Atlanta, in rural communities in Kentucky, and in such distant places as Nigeria and Prague. This initiative has given the practice of street outreach true wings.

Psychiatry on the streets, as part of Street Medicine, may strike us as a more unusual, though no less needed, proposition. The statistics on mental illness among people who are homeless continue to be staggering. The US Department of Housing and Urban Development reported that in 2015 more than half a million people experienced homelessness with nearly 175,000 of them unsheltered during a point-in-time count. Based on a brief survey, 60% of these unsheltered individuals were reported to have a serious mental illness (SMI). A disproportionate percentage of the population with SMI lives unsheltered. While 30% of all people who are homeless are unsheltered, 43% of individuals with SMI have no shelter.3

Data on mortality among homeless individuals are equally disheartening. A 2013 Boston study of a cohort of currently and formerly homeless people showed that the average age of death was 51 years-compared with 25 years of diminished life expectancy for all people with SMI. Drug overdose was the leading cause of mortality and accounted for 16.8% of all deaths. Cancer, heart disease, substance use disorders, liver disease, and HIV infection were also common causes of death.4 In 2009, Hwang and colleagues5 reported that homeless Canadian women are over 5.5 times more likely to die of suicide than other Canadian women.

Given the preponderance of SMI and substance-related deaths, community psychiatrists-as a part of Street Medicine teams-are ideal for providing solutions. Aimed at breaking down barriers, street psychiatrists provide diagnostic assessments, medication management, and therapy in the streets, under bridges, in the woods, and even at McDonald’s. Carrying backpacks with medications, blood pressure cuffs, and scales, street psychiatrists are well-equipped to care for some of the most vulnerable members of our communities.

Rapid assessments are important in the street setting, given the many distractions in outdoor environments. Street psychiatrists also often encounter poor tolerance of lengthy probing assessments. The Figure details an algorithm for quickly determining a provisional diagnosis and which type of medication should be used to treat symptoms. Free questionnaires, such as the Mood Disorder Questionnaire, the Patient Health Questionnaire-9, and the PTSD Checklist Civilian Version, are easy for untrained volunteers to use.6-8 Common medications included in the street psychiatrist’s backpack are listed in the Table.

Medications carried with the team on Street Medicine rounds are often determined by cost and availability to the team. Of note, aripiprazole is often preferred for psychosis and bipolar disorder given its lack of sedative effects. When prescribed on the streets, sedating medications should be used with caution and with clear informed consent. Unsheltered individuals need to be able to defend themselves from violence at all times.

The use of psychotropic medication on the streets is achieved through trust between physician and patient, usually built over numerous, often brief and informal, helping contacts. Without trust, individuals who are experiencing homelessness will rarely engage in treatment. For some, this process may take minutes, but for many, it can take months to years. Even after a person has accepted treatment, maintaining trust should continue to be at the forefront of the psychiatrist’s mind.

Psychiatrists who participate in Street Medicine are experts in establishing rapport with disaffiliated individuals, understanding human behaviors and motivations, and employing motivational interviewing and cognitive behavioral therapy for psychosis. More importantly, the most basic human principles of humility, reliability, unwavering respect, and being kind and approachable are the most effective qualities a Street Medicine practitioner and any psychiatrist can have. These skills and attributes-well-known to community psychiatrists-also make psychiatrists particularly effective leaders of Street Medicine teams.

As mental health and psychiatric services have developed over the past 4 decades, routine practices within the model of psychiatric outreach to homeless populations have led to the assertive engagement and follow-up of similarly hard-to-reach populations. These practices are wholly accepted today and utilized in organized systems of care, including care management components within latter-day managed care. Today’s medicine also focuses more than ever on interdisciplinary care. The street psychiatrist has always needed to collaborate with primary care, inpatient units, emergency departments, jails, homeless shelters, and other providers of services to connect homeless individuals to care.

Street Medicine providers perform an outreach function of engaging with persons who are experiencing homelessness to bring them into the various systems of care, but they must also engage systems through “in-reach.” In-reach is the process of reaching into and advocating within established systems to help providers deliver better care to marginalized individuals. Community psychiatrists bridge the gap between people on the “outside” and people on the inside of systems of care. The subject of access to care and “owning the gap,” wherever gaps exist, resonates within the ranks of all community psychiatrists.

For Wilma, though, the gap continues to exist: at last report, she was still sleeping on the sidewalk. This emphasizes another key role embraced by community psychiatry-that of advocacy. In the end, the solutionto homelessness is access to available and affordable housing-whether independent or supportive in nature. While they advocate for systems change, community psychiatrists working in Street Medicine and similar outreach teams give vital care to people on the street who would otherwise not have access to care and might otherwise not survive the wait to gain housing.

Acknowledgment-The authors acknowledge the American Association of Community Psychiatrists (AACP) for helping to bring this article to fruition. The mission of the AACP is to promote health, recovery, and resilience in people, families, and communities by inspiring and supporting psychiatrists and transforming psychiatry.