In the wake of the unfortunate passing of several high-profile individuals, media headlines illustrate a challenge regarding how best to speak and write about suicidal self-directed violence. 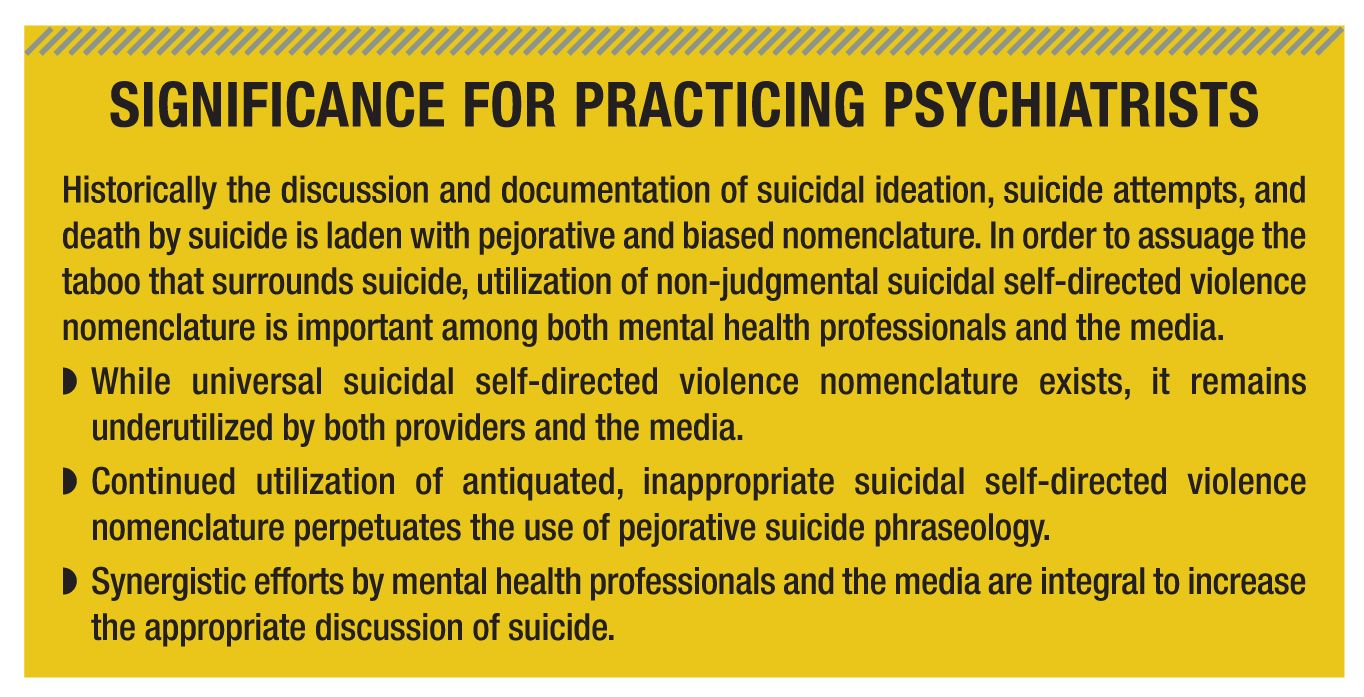 In the wake of the unfortunate passing of several high-profile individuals, media headlines illustrate a long-standing and persistent challenge regarding how best to speak and write about suicidal self-directed violence. This includes both suicidal thoughts, or suicidal ideation, and behaviors including preparatory behavior, suicide attempt, and death by suicide. Despite the Centers for Disease Control and Prevention advocating for uniform definitions of self-directed violence, coupled with guidelines by leading suicide prevention experts and organizations (eg, American Association of Suicidology, American Foundation for Suicide Prevention) to facilitate understanding and reporting of suicidal self-directed violence in the media, idiosyncratic, even troubling, turns of phrase continue to feature in this context.1,2

The incongruity between recommended reporting guidelines and the language often utilized by the popular press provides evidence of a significant disconnect between the field of mental health and the media. The problem is perpetuated in part by challenges faced within the clinical and research sectors in terms of widespread education and implementation of the preferred suicidal self-directed violence nomenclature. Indeed, a quick online search will produce a litany of headlines featuring what is now considered antiquated language for suicidal self-directed violence, such as an individual who “committed suicide” or experienced a “failed suicide attempt.” Unfortunately, similar language not infrequently still appears in clinical records and communications offered by mental health professionals.

Consequences of biased and negative terminology

Although at surface level these phrases may appear rather benign relative to other outdated terms, such as “suicidal manipulation” or “rational suicide,” these terms, as well as others that are inconsistent with the proposed universal nomenclature, risk maintaining stigma and bias. Illustrative is the Merriam-Webster dictionary definition of “commit,” denoting an action that is deliberate, with “crime” and “sin” being the referent of deliberate action. The use of “commit” (often unintentionally) thus imbues suicide with a sense of badness or moral infirmity. Similarly, a “failed attempt” suggests that dying by suicide equates with success. The use of such biased suicidal self-directed violence terminology may reinforce the negative quality and heighten stigmatization of suicidal thoughts or behavior.

The persistent use of suicidal self-directed violence terminology inconsistent with proffered universal nomenclature carries with it several additional concerns. First and foremost, utilization of nonuniversal suicidal self-directed violence terminology enables, or superficially makes okay, the use of such phrases within clinical, research, and public health settings. Of course, such language is then all the more likely to feature in the popular discourse among the general population. This sets up a cycle of continued use whereby mental health professionals, media, and lay persons mutually influence one another, normalizing terms and phrases that are inherently biased, vague, and at times detrimental to patients’ treatment engagement and recovery.

Suicidal self-directed violence is often a devastating event that touches both the patient as well as those within their social support system including family and friends.3 Lack of patient-centered wording in these circumstances thus has the potential to further exacerbate grieving and complicate the recovery process. For example, headlines reporting on suicidal self-directed violence in a manner that fails to adhere to the current reporting guidelines (eg, “actor uses knife in failed attempt to commit suicide”) not only sensationalizes such events but also has the potential to vilify an individual in crisis as being a “failure” for not “completing” the suicide attempt, or as morally defective for “committing” thoughts or actions involving suicide.2 This likely results in further stigmatization around mental health, and suicidal self-directed violence in particular, which is especially alarming given the significant public health concern that suicide remains.

Toward an appropriate universal nomenclature

Taken in aggregate, the utilization of inconsistent and stigmatizing suicidal self-directed violence nomenclature may represent an additional (and needless) barrier existing among clinicians, researchers, policy makers, and the individuals with whom we are attempting to connect, better understand, and treat. Whereas multiple institutions, including the Departments of Veterans Affairs and Defense, have advocated for, validated, and implemented efforts to promote universal nomenclature around suicidal self-directed violence, to improve provider communication, and decrease inherent bias and stigma, such energies to date have largely been focused on relatively narrow clinical and research communities.4,5 To the extent that such efforts have gained traction, this mostly has been within large-scale medical settings wherein infrastructure and oversite (a top-down approach) makes feasible the dissemination, mandate of, and oversite needed to realize the use of suicidal self-directed violence nomenclature.

Continued attention to how suicidal self-directed violence is discussed, within both the clinical and media sectors, remains important if we are to understand how nomenclature may influence suicide risk, especially in terms of how biased or stigmatizing language may provoke stigmatizing and dysphoric reactions among patients and those bereaved by suicide. There is some progress: revisions by the Associated Press Style Book in 2015 advocated for discontinued use of the term “commit/committed suicide” in favor of “died by suicide, killed him/herself, took his/her own life,” reflecting a continued culture of change. Further, at the time of this writing, a recent media report described the passing of a celebrity singer due to death by suicide, doing so in accordance with the recommended media reporting guidelines (eg, “singer dies of suicide”). Thus, there remains room for hope, perhaps tentatively even optimism that continued progress toward patient-centered discussion of mental health, including suicide, is achievable. We may even come to collectively utilize a nomenclature that facilitates engagement by patients and compassion more broadly. 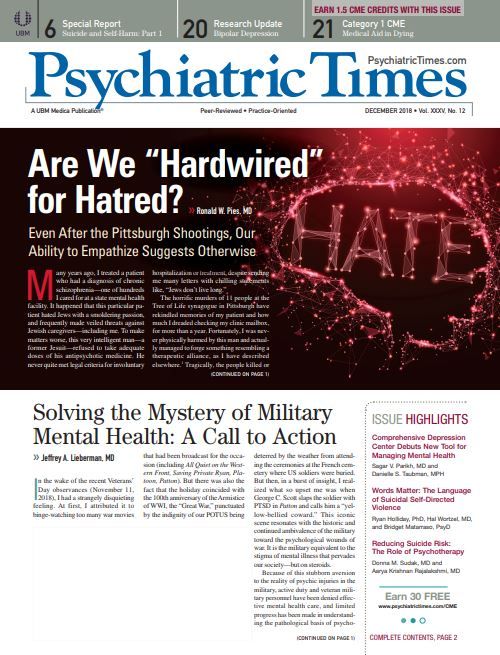 Introduction: Turning Suicide Prevention Science Into Action
Words Matter: The Language of Suicidal Self-Directed Violence
Child and Adolescent Suicide and Self Harm: Treatment and Prevention
Reducing Suicide Risk: The Role of Psychotherapy
When Your Child Is Sick
Medical Aid in Dying: Ethical and Practical Issues for Psychiatrists
Jacques Lacan: The Best and Least Known Psychoanalyst
Solving the Mystery of Military Mental Health: A Call to Action
Listening to Dead Patients
Giving Thanks for These Psychiatrists
Perspectives on the Holiday Season From a California Psychiatrist: No Joy for the World
A Common Antioxidant Shows Promise in Bipolar Depression
Related Videos
Related Content